Everything was over after half an hour. At that point the summit, which was expected to be a historic one, had not even begun, and yet it was already clear that it would not end well.

German Chancellor Angela Merkel and French President Nicolas Sarkozy had met with British Prime Minister David Cameron at 7:30 p.m. on Thursday evening. Their goal was to determine how far Great Britain would be willing to go to support the German-French plans to save the euro.

Not very far, it would soon become clear.

Cameron demanded extensive exceptions for his country in the event that the European treaties would have to be amended. Most of all, however, he wanted the British financial sector not to be subject to European supervision. Merkel and Sarkozy quickly made it clear to Cameron that that would be unacceptable.

The remaining countries want to follow the 17 members of the euro zone on the path to the sort of fiscal compact Merkel and Sarkozy have outlined. They want it to become a so-called "stability union," with balanced budget provisions to be written into national constitutions and automatic sanctions for deficit offenders. It's the kind of union that Merkel believes is inevitable.

But many countries are only following the Germans' lead with reluctance. The agreement only came about because investors are shunning the bonds of ailing euro-zone countries, and because even the strong countries are facing the possibility of having their creditworthiness downgraded by the rating agencies. But other countries that have long supported a true economic government are asking themselves why the Germans had hesitated for so long.

The summit was intended to prove to the capital markets that the euro-zone countries are prepared to resolutely defend their currency. There was talk of an endgame in the fight to save the euro, while Sarkozy called it Europe's last chance.

By this measure, the results are relatively modest. And yet, from a political standpoint, they are extremely dangerous -- because they signify the end of the old EU.

The core of the new union consists of the 17 euro-zone governments, which have even agreed to meet once a month for the time being. Around this core is a ring of up to nine countries, which intend to introduce the euro in the long term and, to the extent that their parliaments permit them to do so, will also sign up to the euro zone's stricter budgetary rules. The rest, led by Great Britain, are condemned to third-class status.

The Beginning of the End of Britain's EU Membership?

What has emerged is a construct that most closely resembles the ideas of the French. Paris always wanted to keep the group of decision-makers as small as possible and limit the European institutions' powers. This was meant to prevent encroachment on national sovereignty and make the EU's famous Franco-German motor indispensable.

Great Britain is now largely isolated. As a result, it needs to ask itself what role, if any, it still plays in this new Europe.

Merkel, for her part, wants to prevent Britain and the euro zone from drifting further and further apart. She recently told confidants that it is important to give the British the feeling that they are still part of Europe. But the French see it differently, hoping that they will carry more weight in a union that does not include Britain.

Despite all their differences, Germany has always seen the EU as a political partner of the United States. The French, however, want to establish Europe as an independent power bloc in competition with the Americans. One reason this has not happened so far is that the British have fought to maintain the EU's close trans-Atlantic ties. This dispute will now flare up once again.

Optimists, like former German Foreign Minister Joschka Fischer, believe that Great Britain will eventually join the core group, if only out of self-interest. But many in the UK see Cameron's veto as the beginning of the end of Britain's EU membership.

To ensure the survival of the common currency, the euro-zone members, and the other countries that want to join them, plan to negotiate a joint treaty by March that would foresee German-style "debt brakes" for all countries -- which would be enshrined in national constitutions and which would virtually eliminate structural deficits -- as well as (almost) automatic sanctions for deficit offenders.

It is completely unclear, however, whether this intergovernmental treaty would be in accordance with EU law. Even Elmar Brok, a member of the European Parliament for Germany's conservative Christian Democratic Union (CDU) and one of Merkel's close associates, wrote a letter to the chancellor warning her against a treaty outside the framework of the Treaty of Lisbon. Such an agreement, Brok argued, would be "illegal."

In the preceding weeks, European Council President Herman Van Rompuy had begged the German chancellor to abandon or at least postpone her plans to amend the European treaties. Instead, Van Rompuy made the case for tightening budgetary oversight with the help of a protocol attached to the Lisbon Treaty, thereby avoiding risky referendums in the individual countries. But Merkel brusquely rejected the idea, permanently damaging the relationship between the two politicians. Van Rompuy said he was "very disappointed" by Merkel, on both a human and political level.

European Commission President José Manuel Barroso even spoke of "warlike conditions." According to Barroso, Merkel and Sarkozy are trying to impose their views on everyone else, even though they themselves can hardly agree on any issue. The fact that the majority of countries bowed to the German-French duo in the end shows how dependent the EU is on its two biggest financiers. Cypriot President Dimitris Christofias described the dilemma in a nutshell: "We really ought to engineer a revolution against Merkel and Sarkozy, but each of us needs the two of them for something."

A Costly Compromise for Germany

Despite German resistance, Van Rompuy, Barroso and Euro Group President Jean-Claude Juncker do not want to give up their plans for common euro bonds. At the summit, the heads of state and government agreed that the trio would submit concrete proposals on the introduction of such bonds by March 2012. One of the purposes of the euro-bond effort is to break the German-French entente, an EU diplomat explained.

In order to make an agreement possible at the summit, Germany had to make additional concessions. One thing that will not materialize is the right to file suit against deficit offenders before the European Court of Justice, something that Merkel had been demanding for weeks.

The Brussels compromise will also become more costly for the Germans than previously planned. If the launch date of the permanent bailout fund, the European Stability Mechanism, is moved up to mid-2012, as was agreed at the summit, Germany will have to pay its cash contribution a year earlier. This translates into an additional burden on next year's budget of at least €4.3 billion. Additionally, Berlin had to pledge that it agreed with the cap on the ESM, currently set at €500 billion, being "reassessed" in March 2012.

The euro-zone countries also want to give the International Monetary Fund (IMF) up to €200 billion in loans for aid to euro countries. The money is to come from the central banks of the EU countries. Germany's central bank, the Bundesbank, opposes the plan, which it sees as a trick to circumvent the regulation that prohibits the ECB from financing governments.

But how quickly can all the results be implemented? And how determined are those European leaders who have reluctantly given in to Merkel and Sarkozy to follow their words with actions? And how much resistance will the plans to transfer a portion of sovereignty to Brussels encounter in their respective countries?

Norbert Lammert, the president of the German parliament, the Bundestag, and a member of Merkel's CDU, believes that the timetable for the planned reforms is "very ambitious," but he is also convinced that they will not fail in the Bundestag. He does have concerns, however, over whether the planned changes can be brought in line with rulings made by Germany's Federal Constitutional Court.

First, however, investors will have to be convinced that the approved measures are in fact sufficient to save the euro. The head of the European Financial Stability Facility (EFSF), German economist Klaus Regling, encountered skepticism when he spoke with investors on the phone on the evening of the summit. They told him that they intended to reduce their exposure in the euro zone.

Calls for the Big Bazooka

Italy and Spain, which have both been hit by the crisis, will have to once again borrow large amounts of capital already in January. If buyers continue to shun their bonds, there will immediately be renewed calls to deploy the instruments Merkel has consistently rejected, namely euro bonds and a massive intervention by the ECB.

The German chancellor knows all too well that her coalition partner, the liberal Free Democratic Party (FDP), will not go along with jointly issued bonds. If she supported euro bonds, her coalition would be finished. That is a step she is not prepared to take, she recently told close associates.

The chancellor is much more flexible when it comes to the ECB. Merkel and Finance Minister Wolfgang Schäuble are tacitly relying on the central bankers for their help in saving the euro. Merkel and Schäuble are calculating that they will rush to the euro's aid with their unlimited funds if the continued existence of the monetary union is in danger. That would not require a banking license for the EFSF or its permanent successor, the ESM.

Because of its independent position -- so the thinking goes -- the ECB could provide any financial institution with cash in return for collateral. Besides, it still makes its own decisions on the quality of collateral. Consequently, it would be easy for the ECB to provide capital for the bailout funds, even without them having a banking license. If necessary, the central bank could also become directly involved in the bond markets and buy up securities on a massive scale to rescue the euro.

Saving Their Own Jobs

In the opinion of government officials, this approach would be in the ECB's own interest. The argument is that the monetary watchdogs in Frankfurt would never go so far as to put their principles and concerns over their own future. If the euro were to fail because they refused to provide assistance, they would be making themselves redundant. Hence, officials at Berlin's ministries are assuming, the heads of the ECB will do everything to ensure the continued existence of the euro -- and, with it, their jobs.

In their baseline scenario, German Finance Ministry officials assume that the monetary union will continue to consist of 17 members. A different scenario, which they believe is less likely to occur, assumes that Greece leaves the euro zone, while all other countries stay.

If necessary, say Finance Ministry officials, the two bailout funds will still have hundreds of billions of euros available, enough money so that even Italy could be kept afloat for a few months. And if it isn't enough, the ECB will simply have to step in. 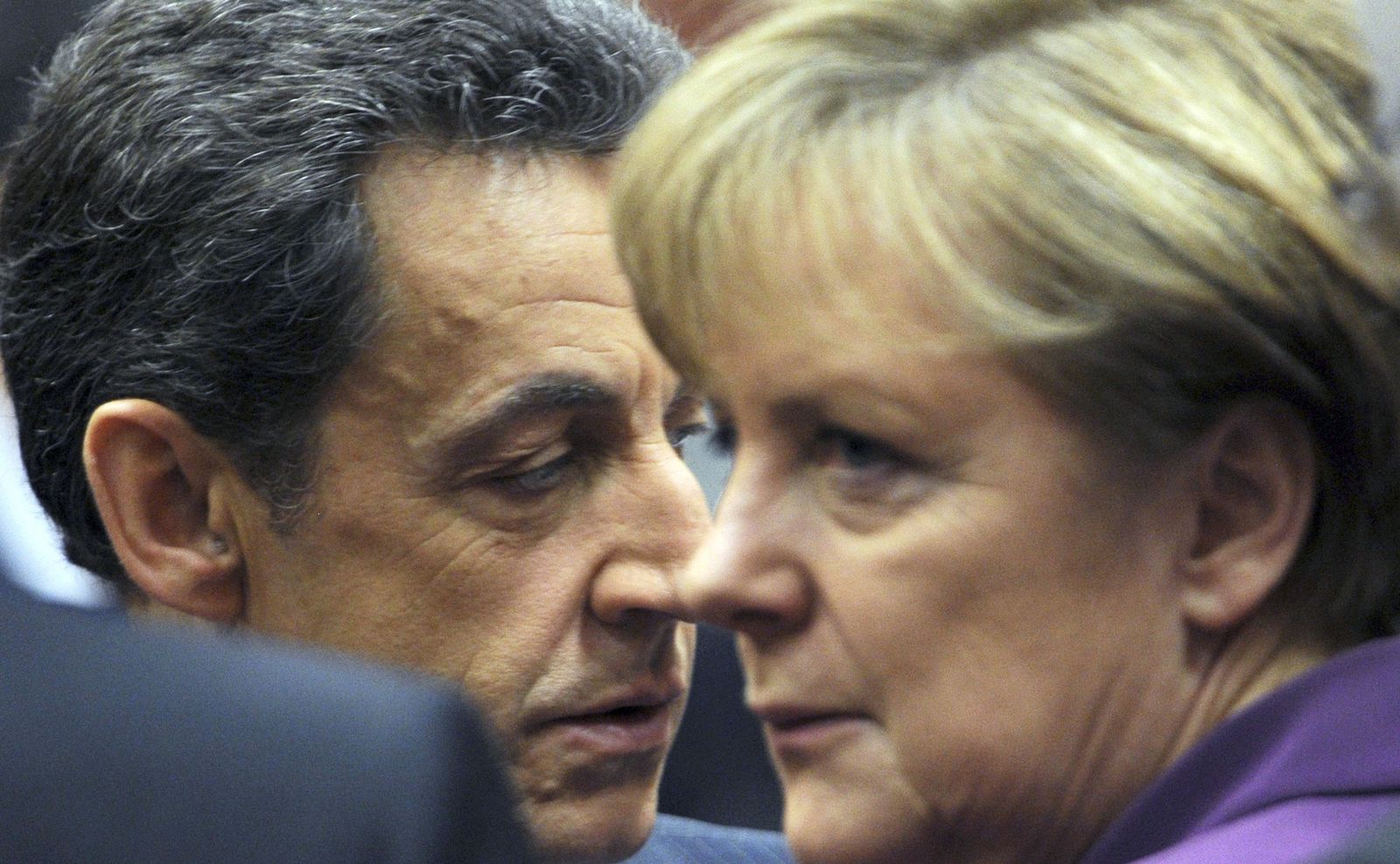