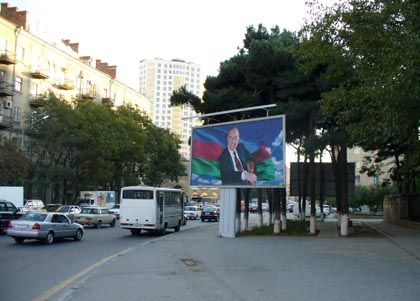 The tall, black-haired man scowls at the small blonde woman sitting across the expansive conference table from him. She has been holding forth for some time, accusing him of not adequately respecting human rights, saying that the next elections must be run more fairly than the last, and warning that freedom of the press must finally be broadened. At the end of her monologue, she is somewhat more conciliatory and allows that the country has made progress -- but things could move faster.

Elmar Mammadyarov struggles to control his rising anger. He is the foreign minister of the former Soviet Republic of Azerbaijan, a land rich in oil and gas and sitting on the shores of the Caspian Sea, north of Iran. And no one is allowed to talk to him like this normally, except perhaps his boss, the president. But Mammadyarov makes the effort because the woman sitting across from him is incredibly important for Azerbaijan.

The outspoken guest is the Austrian Benita Ferrero-Waldner. The 59 year old is the European Commissioner for External Relations and responsible for the European Neighborhood Policy -- and she regularly visits the countries bordering the EU, from Morocco and Egypt, through Jordan, Israel or the Ukraine, to Armenia, Georgia and Azerbaijan. She frequently makes calls for more democracy and promises in return stability, security and prosperity.

The EU has already given over €8 billion ($12.2 billion) to 12 countries on its borders and plans to hand out another €12 billion ($18.2 billion) over the next six years. The result of this investment, hopes Ferrero-Waldner, will be a region that is both relatively prosperous and politically stable. The hope is that this ring of friends," as she has called the plan, will keep terrorists away and unwanted immigrants at arm's length.

But the rosy plan has a catch: Most of these neighbors aren't just interested in stability and prosperity, but they also have their hearts set on eventually becoming full-fledged members of the EU. Above all, it is the countries on the eastern edge of the European continent that have gotten their hopes up -- and not without justification. Poland, Great Britain and the Baltic States all would like to extend the borders of the EU as far as the Caspian Sea. The region is waiting in the EU-enlargement line directly behind the Balkans -- it's just that nobody is supposed to talk about it yet. No, no, denies the Austrian Commissioner, membership perspective is not part of her plan. The neighborly friendship may extend to substantial support, but not beyond. It is a difficult, fine line to walk, she says.

That may be true. But the greater EU cooperation with its neighbors becomes, the more pertinent the old question that has plagued the 27-member group since its inception becomes: Where does Europe in fact end? Is Georgia part of Europe? What about Morocco? Israel? And then, of course, what about Ukraine? 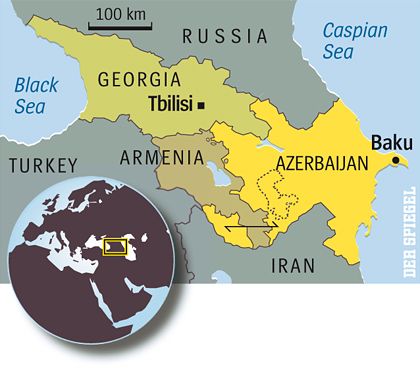 Does Europe extend to the Caucausus?

Ferrero-Waldner and her team have developed a separate "action plan" with each of the 12 participants in the European Neighborhood Policy. Europe helps with expertise and funding in areas such as transportation, job training, energy supply, the training of customs officers, police or judges, and in providing the poor with food and clothing -- and the countries themselves can choose where the focus should lie. And then there is a bit of tutoring in the study of democracy and the constitutional state thrown in -- as, for example, with Elmar Mammadyarov in Baku, Azerbaijan's capital.

Ferrero-Waldner continues the mandatory lesson over dinner: When will these three journalists, who were arrested without reason, be released? Why is the government doing so little to improve its relationship with Moscow? Well, answers a grouchy Mammadyarov, the journalists must first file a petition for their release, which will then be reviewed by a judge. And he would like improved relations with Russia as well, but Azerbaijan is not going to kowtow. His country, after all, has become a well-performing mid-sized power in the region."

Just how much has changed in recent years can immediately be seen during rush hour in Baku. Traffic jams stretch as far as the eye can see, with rusty old trucks from the Soviet era stuck bumper-to-bumper with highly polished sport utility vehicles. In 2007, economic growth was around 25 percent, thanks to oil and gas bubbling out of the ground. The gulf between rich and poor has widened considerably, and beggars stand in front of Armani and Escada shop windows.

An internal EU paper on Azerbaijan takes note of the economic progress the country has made. Nevertheless, when it comes to democracy, freedom of the press or human rights, the official message in the paper is that of "persistent difficulties." That also goes for Azerbaijans neighbors, Georgia and Armenia -- and Ferrero-Waldner is not shy about voicing her concerns there as well.

Moreover, the strong nerves that often earn her ridicule at home serve her well. In the Caucasus, she often faces hard-boiled nationalists. What the spokesperson of a human rights organization -- financed by the EU -- says of Armenia, applies to Georgia as well: There is an extremely corrupt political leadership, no free judicial system, no free press, and the elections are no freer than they were in the Soviet Union.

But those are only the horror stories, says Georgian Prime Minister Vladimir Gurgenidze. He speaks English with an American accent and greets people by singing out Hi, everybody! Of course there are improvements that need to be made, he says -- and thats why his country needs help from Brussels. Europe is in our hearts and our minds, gushes Gurgenidze. We want free trade with you, facilitation of visas and EU membership.

Georgia will be joining NATO soon, says Gurgenidze, at the latest when there is a Democrat in the White House. And there are already Georgian soldiers in both Iraq and Afghanistan. The Americans recognize that," adds Gurgenidze smugly, looking at Ferrero-Waldner, his European guest: Its good to have friends.