When the European common currency was first conceived, there were plenty of skeptics. Without further integration of budgetary policy among countries belonging to the currency union, they said, the euro was doomed.

The ongoing European debt crisis would appear to have lent credence to the naysayers -- and on Thursday, European Central Bank head Jean-Claude Trichet proposed the establishment of a European finance minister with veto power over the budgets of debt-stricken countries.

"Would it be too audacious to imagine a European Union that not only has a unified market, a common currency and a common central bank, but also a common Finance Ministry?" Trichet said during his acceptance speech of the prestigious International Charlemagne Prize for distinguished service on behalf of European integration.

In his talk, Trichet outlined an EU future in which a European Finance Ministry would have the power to veto the budgetary plans of euro-zone member states in certain situations. He emphasized that such a veto would only come after aid of the type received by Portugal, Greece and Ireland had failed.

"The basis for this idea is that of striking a balance between national sovereignty on the one hand and the interdependence of member-state actions on the other, particularly in exceptional situations," he said.

Little Appetite in the EU

There have been several ideas floated in recent months for a deeper integration of European financial policy as a result of the ongoing debt crisis shaking the common currency. None, however, have called for the kind of EU veto power included in Trichet's vision.

Trichet made it clear that he hardly expects such an institution to be created overnight and it would also require the significant alteration of the Lisbon Treaty, which governs the European Union. Furthermore, there would appear to be little appetite in the EU at the moment -- particularly in Berlin -- for a deepening of European integration.

The ECB president did, however, receive tepid support for his idea from German Finance Minister Wolfgang Schäuble. "It would be nice," he said of the idea. "But it is not possible in the foreseeable future." Luxembourg Prime Minister Jean-Claude Juncker, who is also head of the euro group, the 17 nations that use the common currency, told the Financial Times Deutschland that "it would certainly make sense. But the political prerequisites are not in existence."

Still, the timing of Trichet's proposition is notable, given the increasing skepticism surrounding Greece's ability to emerge from the debt crisis. Doubts had grown so large in recent weeks that it was unclear whether the EU and the International Monetary Fund (IMF) would come to Athens' aid now that it has become apparent that the €110 billion aid package passed last year is insufficient.

Furthermore, there has been disagreement in Europe over plans for a "soft debt restructuring" for Greece, which would involve extending the periods on loans made to the country, among other measures. On Wednesday, the ratings agency Moody's further downgraded Greek debt, deep into junk status.

In the short term, there may be some relief in sight for Greece. According to Reuters, euro-zone officials in Vienna agreed in principle late on Thursday to the framework for a new aid package for Athens. While the exact amount of the deal has not been revealed, Reuters was told that €30 to €40 billion would come in the form of loans from the EU and the IMF, likely from the European Financial Stability Facility (EFSF).

Additional billions would come from further austerity measures and Greece's privatization program. Furthermore, Athens hopes to get some private sector creditors to agree to swap their current bonds for new ones maturing 10 to 15 years later.

In all, the Greek paper Kathimerini reported, the new package would be worth up to €85 billion and would carry Greece through until 2014.

Trichet, for one, certainly hopes that will be enough. "The euro is a strong and credible currency," he said in his Thursday speech. "It has the trust of our citizens, of investors and of savers. There is no "euro crisis" as such." 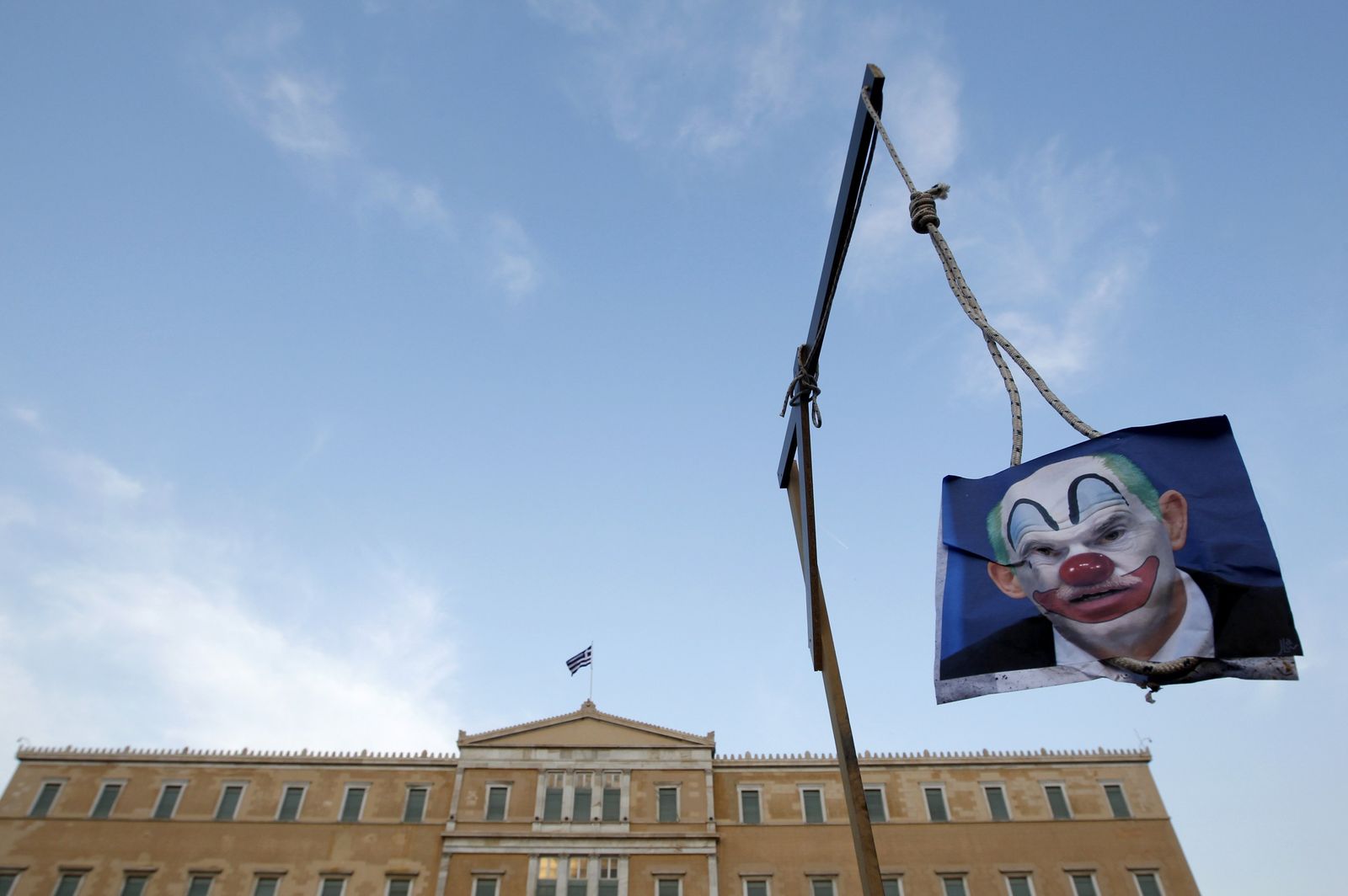 A portrait of Greek Prime Minister George Papandreou painted as a clown in a Thursday protest.