In Westminster there are no names: members of the British parliament refer to even their most bitter enemies as "honorable members." That they are men and women of honor is taken for granted. After all, this is the "Mother of Parliaments," a name Westminster awarded to itself more than 150 years ago, the cue for younger, lesser democracies to look to London to see how politics should be done.

Well, a word of advice for those nations who once gazed in democratic admiration at Britain: you might want to look away now.

Every day of the last fortnight has brought fresh revelations exposing the greed, deceit and downright dishonor festering in Britain's House of Commons. Leaked publication of the expenses claims filed by Members of Parliament, or MP's, has been, by turns, comic -- including the news that one landed aristocrat of the Conservative party had claimed £2,000 (€2,290, $3,230) of taxpayers' money to maintain the moat around his country estate, while another sought £1,645 (€1,884, $2,656) for a floating "duck island" in his garden pond, lest the birds fall prey to foxes -- and truly shocking. Even those who follow politics professionally, like I do, have discovered the extent to which our elected representatives have had their snouts in the public trough.

It is a scandal that has kept the British people entertained, as all good scandals must, but it has also shone a harsh and unforgiving light, its beam stretching far beyond the Westminster village. Previous controversies have mired either individuals, like the war minister John Profumo -- who lied about his affair with a call girl in 1963 -- or whole parties, like the "sleaze" revelations that finally toppled the 18-year-old Conservative government in 1997. But this one goes much deeper. It is the entire political system that is now on trial in Britain and, with it, the very society that Britain has become.

The source of the trouble has been the Daily Telegraph, which somehow acquired an electronic hard-drive containing copies of more than 700,000 receipts and their accompanying claims. The paper has been leaking them out drip-by-drip, inflicting a kind of Chinese water torture on the parliamentary classes.

At the heart of the matter is the Commons rule that allows MP's to claim for the cost of maintaining a second home. (They are deemed to need two, so that they can have one close to Westminster and another in the constituency they represent.) It sounds simple enough, but we now know it opened the door to unimaginably extravagant forms of abuse.

So we have discovered that at least two senior figures in Labour -- the party created to represent the working class and which for decades was seen as the caring, sharing protector of the poor -- were claiming for interest payments on mortgages that didn't exist: the MP's had already paid off the loans.

One Labour MP, Margaret Moran of Luton, a small town north of London, received £22,500 (€25,770, $36,333) to pay for repairs to a third house that was neither near Westminster nor Luton but in the coastal city of Southampton -- where her husband works. When challenged as to why the taxpayer should pay for a seaside home hundreds of miles from both parliament and her constituency, she replied that she needed the emotional support of a partner to "sustain" her in her high-pressure career. Instantly the phone-in shows were jammed with the irate testimony of long-distance couples who get no financial help from the public coffers to "sustain" their relationships.

Several new words have entered the public lexicon, "flipping" chief among them. This was the practice, discovered by canny MP's, of designating first one property -- say, the London flat -- as the second home, on which more than £20,000 (€22,908, $32,296) a year could be claimed, before "flipping" the second-home designation to the other property, thereby allowing the MP to claim money on that. More than a few MP's developed lucrative sidelines as property speculators, claiming public cash to refurbish one house, selling it at a profit, pocketing the money, buying another one -- and starting all over again. 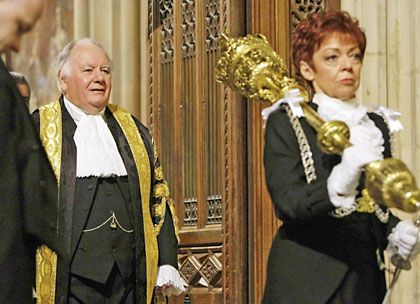 Michael Martin became the first Speaker of the House of Commons to be ejected from the post since 1695.

Some of those named and shamed have rushed to pay the money back, prompting derision from ordinary Britons who note that, were they caught stealing a handbag from Harrods, offering to give the bag back would not get them off the hook.

Jaw-dropping examples have emerged daily. Some MP's have been told by their party leaders to stand down at the next election -- which will have to take place by June 2010 -- others have been sacked from their frontline roles. But the largest head to roll has been that of the Speaker of the House of Commons.

On May 19, Michael Martin became the first person to be ejected from the chair of the House of Commons since 1695. For 300 years, the Speaker had been treated as a near-monarch, complete with a Gilbert-and-Sullivan costume, loyal bewigged flunkies at his side, and a grand Westminster residence. Convention dictated that no MP utter a word of criticism for him.

Destined for the Chop

All that was thrown to the wind when a series of MP's rose to tell Speaker Martin to his face that he had to go. Not only had he presided over the expenses system -- profiting from it himself, claiming a whopping £4,000 (€4,582, $6,450) in taxi fares for his wife's shopping trips -- he had also done his damnedest to keep it hidden from public view. In 2000, the Labour government had passed a US-style Freedom of Information Act. Speaker Martin fought it all the way through the law courts -- his legal costs paid with public money, of course -- to prevent the Act from revealing MP's expenses. As the very embodiment of parliament's profligacy and secrecy, he was always destined for the chop.

But that will not be the end of it; what has been exposed goes far beyond the failings of one man. Britons have gazed in disgust as they contemplate the avarice and venality of those who represent them. The Labour revelations have shocked most: many say they always knew the Tories were a rich man's club, but they are distraught to see members of the one-time party of socialism clawing and grabbing silk cushions and sparkly toilet seats, bought from the public coffers.

In a way, it marks a fitting end for the era of Tony Blair, the former prime minister who persuaded his party to embrace the materialistic ambitions of the go-go, Thatcherite 1980s, re-branding itself as New Labour. "We are intensely relaxed about people getting filthy rich," Blair's arch-lieutenant, Peter Mandelson, famously said in 1998. Now we know Labour's foot soldiers in the Commons took that literally. Surrounded by high-rolling financiers in the deregulated City of London who had been freed by the Blair government to pay themselves telephone-number bonuses, plenty of Labour MP's clearly fancied a piece of the pie for themselves. Just as Blair and his wife Cherie were once dubbed the "Sultans of Bling" by Italian newspaper Corriere della Serra for their keenness to accept gifts and jewellery from Silvio Berlusconi, so the Labour MP's exposed by the Telegraph stand as creatures of the era -- the first decade of the 21st century when nothing mattered so much as money.

A Whiff of Revolution in the London Air

Something else has been revealed too. Britons have seen that they are held in a kind of contempt by those they elect. "What right does the public have to interfere with my private life?" asked an outraged Tory MP Anthony Steen, apparently forgetting that the public had been subsidising his private life -- to the tune of £87,000 (€99,650, $140,487) over four years spent maintaining his enormous country estate.

Steen's words were more revealing than he realised. They showed that many British politicians still regard themselves as lordly masters, with the public no more than irritating and vulgar servants. That approach is encoded into our system, which holds that the slippery notion of the "crown-in-parliament" is sovereign -- rather than the people. So while the United States was built on the ideal that power flows upwards from "We the people," Britain still rests on the assumption that power begins at the top, where the monarch used to sit, and flows downward.

This explains much of the rottenness in the British system. A second chamber -- the House of Lords -- that is not elected by the people at all, but appointed by the prime minister. A constitution that is not written down, but shrouded in mystery, so that the British people have no clear idea of the rules by which their society is governed. Election dates that are not fixed, but chosen by the prime minister, coming down from his throne to -- in the actual phrased used -- "go to the country."

It would be an enormous and radical step, shifting Britain from its current parliamentary sovereignty to the popular sovereignty that operates in most other democracies. Will it happen? Usually, when it comes to change in Britain, the smart money bets against: things tend to stay the same. But the Profumo affair blew away the cobwebs and unleashed the age of Swinging London. The expenses crisis of 2009 might leave behind nothing more than a sullen contempt for those in charge. But the current mood suggests something more. Right now there's a whiff of revolution in the London air.

Jonathan Freedland, 42, writes for the editorial pages of the British daily Guardian. His is the author of the book, "Bring Home the Revolution: The Case for a British Republic."