When the financial institutions of the Western capitalist world began to wobble in the autumn of 2008 -- with some collapsing and taking others with them -- fear swept through the corridors of power. What could be done to stop an economic meltdown? Finance ministers and world leaders gathered at hectically planned crisis summits, where they applied Band-Aids to a severely wounded financial sector using billions of dollars and euros of taxpayers' money and promised to stabilize the fragile system for all eternity.

More than a year has passed since then, but not much of substance has been done.

When the first states found themselves on the brink of bankruptcy -- Latvia, Estonia, Hungary and then Greece -- the leaders donated more and more billions of taxpayers' money and prescribed drastic remedies in the form of stringent austerity measures -- including for themselves. "We did what was necessary," a confident German Chancellor Angela Merkel said at each stage of the crisis. Her colleagues nodded in satisfaction.

At the same time, most of them don't even have a clue as to whether their activities have been helpful or counterproductive, or if they are even having any effect at all. "It worries me that many politicians believe that things will be the same after the crisis as they were before the crisis, when the world was still in order," Carsten Pillath, the director general in the European Council responsible for finance policy, told a small group of co-workers.

But Pillath, like many other economists, believes that is a big mistake. "In the longer term, we will have slow growth rates, while having to clean up over-indebted budgets at the same time," he said. If Europe is to succeed in doing that, however, it needs a "macroeconomic model" -- in other words, a target which can provide the basis for economic policy decisions.

The fact is, however, that politicians aren't even thinking about this. The men and women elected to higher office are mainly interested in one thing: getting re-elected and retaining their power. Anything else is secondary.

If you look at the European political landscape these days, the image you get is largely a desolate one.

A Hyperactive Sarkozy and a Hesitant Merkel

For a long time, the German-French double act ensured at least a minimal amount of leadership and orientation in Europe. But those days are over, too. Take, for example, the following questions: Do we need European economic governance? Should we ban hedge funds? How massive should the austerity measures being put in place be? Does Europe's economy need stimulating? The governments of Germany and France are currently providing contradictory answers to most of these questions -- or worse, no answers at all.

Almost worse is the fact that the countries' leaders aren't only far apart when it comes to goals. They also differ radically in their style of doing things: Nicolas Sarkozy is a hyperactive egomaniac, while Angela Merkel is a grouchy ditherer.

It makes no sense to try to "hide the fact that there is tension between France and Germany," Jean Bizet, the chairman of the European Affairs Committee in the French Senate, wrote in a recent essay for Le Monde -- and it is unlikely he put pen to paper in such a controversial way without discussing it first with Sarkozy, a close political ally.

Berlin regularly riles back, mostly under the cover of aides to the chancellor who can not be quoted. After reaching a €750 billion deal to shore up the faltering euro in early May, Sarkozy boasted to reporters that he had succeeded in pushing through "95 percent" of his ideas, including a "European economic government." A confidant of Merkel sneered back: "I will not deny that that was hot air."

The Results of Political Failure

Europe's crisis is not an accident caused by the globalized economy -- it is the result of political failure.

This ailing continent needs newer and better politicians. But where could we find them? There is no sign of a European Obama or anything remotely like him.

'A Leadership Vacuum in Its Hour of Crisis'

People are being fooled by "renationalization tendencies" and politics that are increasingly provincial, argues Manfred Weber, a member of the conservative Christian Social Union -- the Bavarian sister party to Merkel's CDU -- who is the deputy head of the European People's Party group in the European Parliament. "People think they can solve the problems best on their own, in their own country." But Weber argues that way of thinking is incorrect: "It just reinforces prejudices." His conclusion? "There aren't enough true Europeans involved in politics."

Europe is "suffering from a leadership vacuum in its hour of crisis," claims Markus Ferber, the head of the Christian Social Union group in the European Parliament. That is especially apparent in Brussels, the European Union's control center. It's the place where, ideally, proposals for dealing with the crisis would come quickly and decisively, would be packaged to meet the interests of the 27 member states, and compromises would be prepared in advance that would make it possible for all countries to swiftly make decisions together. But at the time of the most threatening crisis since the bloc was founded, the people at the helm in Brussels are pale, weak figures.

A Complete Failure in Brussels

The European Commission, which likes to proudly present itself as keeper of the Holy Grail, in the form of the European treaties, and which sees itself as the core of the political project of the century, has been completely out of commission when it comes to crisis management. First, it remained silent in order not to endanger the re-election of its president, Jose Manuel Barroso. And once he was confirmed in office after a protracted stalemate, he had suffered so many indignities that leaders in the important European capitals no longer took him seriously.

In addition, the ratification of the Lisbon Treaty, the successor document to the failed European constitution, put the European Parliament -- previously a talking shop without much power -- onto a largely equal footing with the Commission. The parliament and the European Council, which comprises the heads of state or government of the 27 EU members, have suddenly become the poles of power in Brussels, says Professor Jörg Monar of the College of Europe, a university known for grooming future eurocrats. The European Commission, he says, "is getting increasingly crushed" between the two.

Former Belgian Prime Minister Herman Van Rompuy so far hasn't done anything to change the state of malaise in Brussels. He was chosen as the first permanent president of the European Council and was supposed to lend more European solidarity to the summits of national EU leaders. That effort went pretty much awry. "Van Rompuy was travelling in Asia as the crisis summit was being held in Brussels," scoffed the CSU's Ferber, adding that European Commission President Barroso was "busy with the EU-Latin American summit."

Now the impotent want to regroup. Van Rompuy has announced the creation of "some crisis cabinet" that would quickly bring together "the main players and the main institutions." It would include Jean-Claude Trichet, the president of the European Central Bank, European Commission President Barroso and, naturally, Van Rompuy himself. "That's hilarious," one government adviser in Berlin said in response to the proposal. And inside the Elysee Palace, Sarkozy's official residence, people were "laughing out loud," according to insiders.

Barroso and Van Rompuy have since scaled back their ambitious plan a bit. They are now meeting for breakfast every Monday. 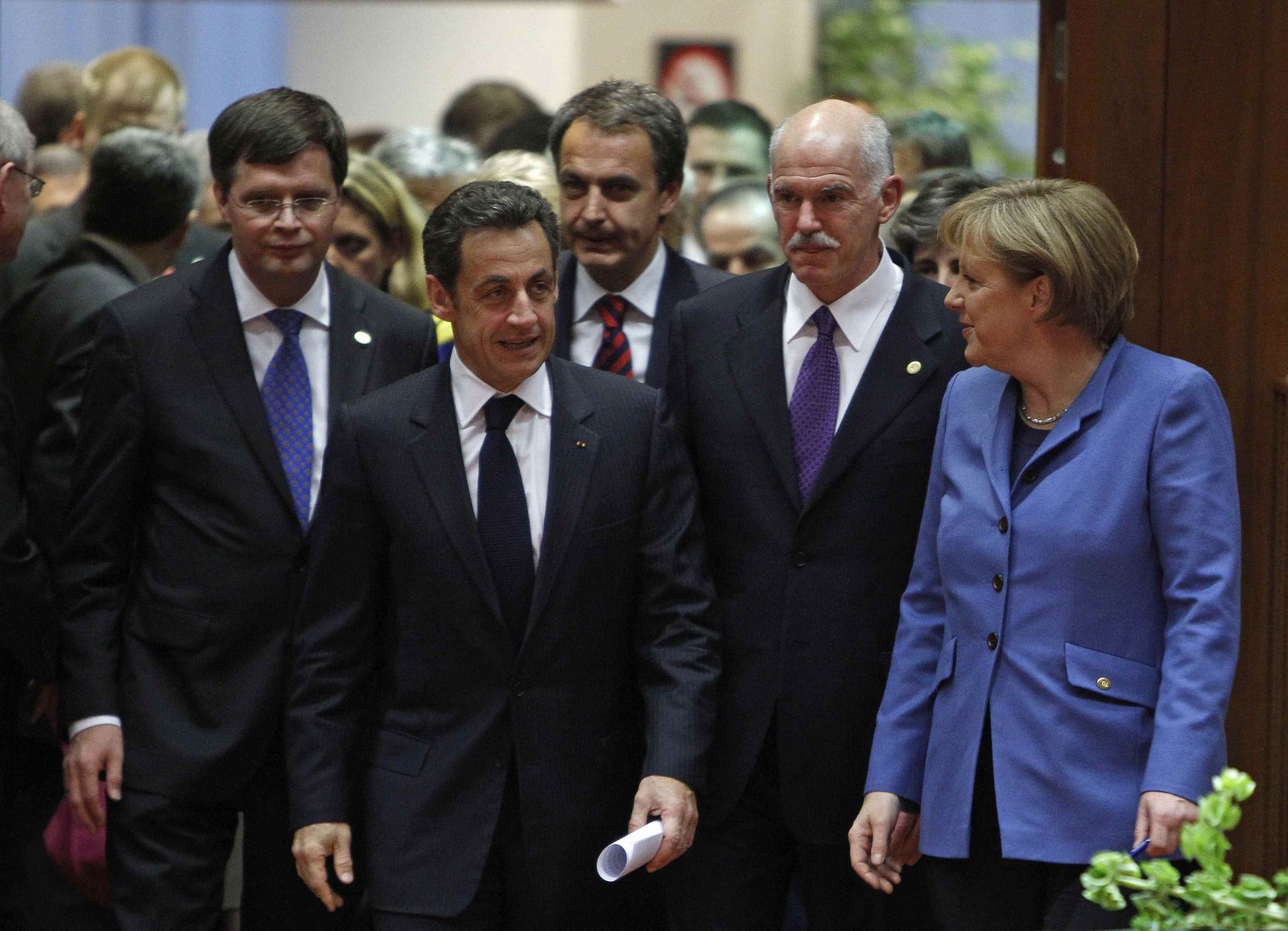 The leaders of the European Union are more interested in preserving their own power than addressing the bloc's serious problems.