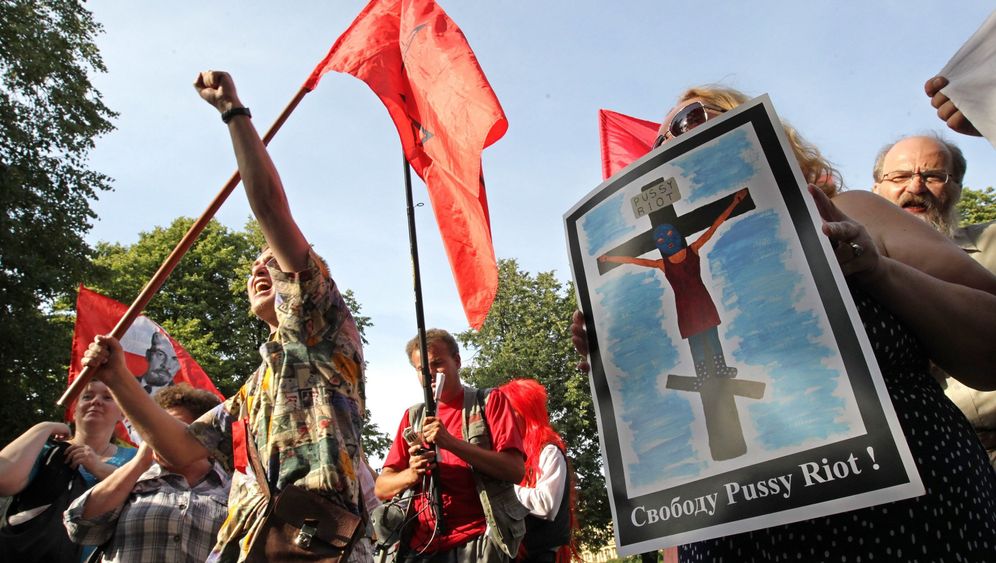 The trial against Moscow guerrilla punk band Pussy Riot is drawing to a close. Following calls from within the Russian Orthodox Church for tough punishment of the punk musicians' impromptu performance inside Moscow's main cathedral, prosecutors on Tuesday called for three-year prison sentences for each of the three accused women. Rushed trial proceedings have lasted late into the evenings.

There were allegations in the courtrooom that the defendants wore clothing that was "obviously contrary to general church rules." It was even suggested that the women were practically possessed by the devil, having "twitched and jumped satanically, throwing their legs up, rolling their heads and calling out very insulting and blasphemous words."

Thanks to the slow summer news cycle, dozens of television teams from around the world have come to report on the grotesque trial at Moscow's central Khamovniki court.

But it has slowly begun to dawn on both the Russian Orthodox community and the Kremlin that they may have done themselves a disservice with this ruthless and bizarre prosecution of the anti-Putin band members. A tough verdict won't have the effect of a deterrent, warns Orthodox intellectual and clergyman Andrei Kurayev. On the contrary, the church is provoking copycat crimes and encouraging a radicalization of the opposition, he says. There has "never been a shortage of young extremists" in Russia, Kurayev adds.

Konstantin Sonin, a columnist for the business newspaper Vedomosti, even spoke of the "worst mistake by the Church since 1901." That year the Orthodox Church had the elderly writer Leo Tolstoy excommunicated.

Judge Marina Syrova said on Wednesday that she would announce the verdict on August 17 for Nadezhda Tolokonnikova, 23; Maria Alekhina, 24; and Yekaterina Samutsevich, 29. In a recent interview he gave in London when the Pussy Riot activists were arrested, Prime Minister Dmitry Medvedev forbade any intervention in the case -- at least when it comes to foreign entities. Meanwhile, during a brief visit to the London Olympics, President Vladimir Putin said: "I don't think that the verdict should be very severe."

There is no way to tell if the statement by Putin, who generally never caves to outside pressure, signals a move toward milder treatment for Pussy Riot. But the Kremlin certainly won't risk an acquittal. This would be interpreted as a huge victory for the opposition, and a slap in the face for the church, a long-time Kremlin ally. And the church won't be satisfied with a big fine for the band either. For days it has been warning that Pussy Riot's many supporters would easily help them raise the money.

But the church and the Kremlin have only themselves to blame for the swell in worldwide support. The scandalous trial against Pussy Riot has revealed the disturbing proximity of church and state in Russia. During the Soviet era, it was the KGB intelligence agency and its predecessor, the NKVD secret police that arrested believers and clergy members, locking them up in gulags or having them shot. Thousands of churches were demolished -- among them Moscow's main Cathedral of Christ the Savior. Former President Boris Yeltsin was the first to allow their reconstruction.

But Putin -- himself the former head of the KGB and leader of its successor, the Federal Security Service (FSB), in the 1990s -- has gone even further. For years intelligence agents have been cultivating support among key church leaders for him. One would be hard-pressed to find any sign that Russian Orthodox Patriarch Kirill fears the FSB. As the Pussy Riot trial went on last week, he laid the cornerstone for the new church of Moscow's FSB Academy.

It was exactly this closeness between the Church and Putin's regime that Pussy Riot used to justify their appearance in the Moscow cathedral. And, because their opponents appear to be so powerful, and conservative politicians like right-wing philosopher Alexander Dugin want to see them "burn on a pyre," Pussy Riot has netted a wave of solidarity from the West that even imprisoned former oligarch Mikhail Khodorkovsky would envy.

Pop legend Madonna made a case for a lenient sentence during a concert performance in Moscow this week, as have many members of the Bundestag, Germany's parliament. Solidarity events have been staged in Munich and a support video by international pop performance artist Peaches is planned in Berlin. Even in the tranquil Swiss city of Winterthur, someone reportedly spray painted "Free Pussy Riot" on the side of building.

But as questionable as the furor with which the church and justice system are pursuing the band may be, the reactions and expectations from the West are equally exaggerated. Britain's Observer newspaper called the group Putin's "biggest political headache." Meanwhile, German weekly Der Freitag asked, "Can these women overthrow Putin?"

The answer, of course, is no. Though polls show that the majority of Russians disapprove of the church's ties to the government in Moscow, data from the Levada Center, a respected research agency, shows that nearly 47 percent of respondents view the maximum possible sentence of 7 years as "appropriate" punishment for the band.

This makes it unlikely that the rather conservative-minded Russian masses would storm the Kremlin in the event of a Pussy Riot conviction.

Known for its generally pro-government positions, it was surprisingly the Moscow daily Izvestia of all papers that recently expressed what may be the most fitting conclusion about the trial. "What is certain," the paper wrote last week, "is that in the case of Pussy Riot, everyone has already lost -- whether the trial ends with an acquittal or not."