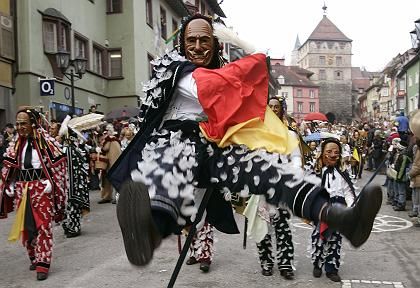 A carnival reveller vaults on his pole during the "Narrensprung" carnival parade in Rottweil.

Germany's carnival season is no laughing matter for the small town of Rottweil, tucked deep in the Black Forest region in Germany's southwestern corner.

Elsewhere around the country, millions of revellers are busy getting drunk, dressing up as cowboys or Friesian cows and enjoying symbolic castration -- the cutting off of men's ties.

But the townsfolk of Rottweil, the original home of the Rottweiler dog breed, turn their noses up at such levity. Their purist version of carnival, or Fastnacht as it is called down here, seems a tad strict even to Black Forest people who don't live in Rottweil. To visitors from further away, it's downright bizarre.

The highlight of Rottweil's Fastnacht is the "Narrensprung" ("Fools' Procession") on Rose Monday, the last Monday before the beginning of Lent.

A marching band trumpets its way through the town from five o'clock in the morning to wake up the townsfolk for the main event.

The procession starts at eight o'clock when around 4,000 Fools start filing down into town through Rottweil's medieval Black Gate. They're dressed in elaborately carved wooden masks and costumes that never change and have been handed down through the generations.

Everything is carefully choreographed as they parade down the cobbled street lined with crowds of onlookers.

They perform a slow, shuffling dance, hopping from one leg to another to the tune of the "Fools' March" which is played over and over and over again. Their high-pitched calls of "Hu Hu Hu!" and their guttural purring sounds, muffled by the grotesque masks, are part of an inexplicable array of customs that have evolved over centuries.

After a couple of hours the never-changing music, played by an indefatigable orchestra, and the sight of the endless, swaying stream of masked figures pouring out of the city gate have a hypnotic effect that deprives the onlooker of all independent thought and will.

There are only seven different types of masks, each representing a separate Fastnacht character. They include the Federahannes, which has large teeth curving out of its mouth and a costume covered in goose feathers.

The Federahannes carries a long pole with which he performs precarious vaults across the cobblestones, and the pole has a heavily perfumed calf's tail attached to it which he dangles in people's faces with a growling purr.

Another character, the Gschell, has dozens of bells attached to his body on heavy leather straps, and the ringing sound echoes through Rottweil's medieval alleys.

The Rottweil festival is famous throughout Germany and it's undeniably spectacular. But to the uninitiated, there's something disturbing about this onslaught of customs that date back to the early 14th century.

Astonishingly, none of the children were crying. Maybe they were all in a trance or too busy collecting the sweets the Fools were handing them. With all the medieval rituals going on it wouldn't have been surprising to see a masked Pied Piper lure them away and turn them into traditional Rottweil pies.

"Rottweil has very strict, exact guidelines regarding its costumes, the movements the Fools are allowed to perform and the music," Jürgen Hartmann, master of Fastnacht ceremonies in the nearby town of Sulz, told SPIEGEL ONLINE. "You get reprimanded if you take your mask off during the day. Carnival here is far more conservative and traditional than on other parts of Germany."

Similar, albeit less rigorously controlled Fastnacht processions are staged throughout southwest Germany. And the custom isn't dying out, partly because young people aren't moving away from this economically prosperous part of the country.

"We don't have any problems attracting young people into our organizations," said Hartmann. "Many villages are setting up new groups. Initially these groups were exclusively Catholic but now they're mixed confession. That is gradually watering down the customs. In fact, having fun is becoming more important than the ritual aspect these days."

Not so in Rottweil. The masks and costumes costs thousands of euros and are rigorously inspected by the Rottweil Fools Association, which stresses the need for discipline on its Web site.

"Marketing and advertising awakens interest and turns the Fastnacht into a major event which has nothing to do with Rottweil Fastnacht," says the Association. "And the deplorable custom of simply recreating limited Fastnacht costumes doesn't help the Fastnacht, it waters down the heritage that lives from its quality, not quantity."

There are rules and regulations for every part of the ceremony. In the weeks before the parade, so-called "Dusters", men in black tailcoats with top hats and white gloves, walk around town knocking on Fools' doors and symbolically dusting off the expensive masks brought out of trunks and wardrobes.

The Fools have to keep a Fools' Book in which they draw scenes relating to funny events that happened to them over the year. They may have burned their bottom on a hot water bottle for example, or driven into the car wash with their sunroof open.

They carry these diaries with them during the procession and pick out people in the crowd whom they regale with their funny stories. The aim is to involve the general public in witty conversations.

"They're a bit sniffy in Rottweil," said Hartmann, whose Fastnacht procession in Sulz is a far more relaxed affair. "Their carnival tradition dates back further so they try to distinguish themselves from the rest of us. But one has to respect how they preserve their heritage."