Plastic bags filled with garbage covered the Piazza del Plebiscito in Naples. In the suburbs, piles of garbage grew like tumors along arterial roads, and at night the air was heavy with the pungent odor of burning dumps. More than 1,100 tons of new waste was being added to the piles every day.

The garbage had to be removed. But how? And where would it go? That was the question that worried Lorenzo Miracle, the manager of an Italian logistics company.

Meanwhile, the streets were spic and span in Großpösna, a town in the eastern German state of Saxony. It is the site of the Cröbern Central Waste Treatment Plant, a monument to German thoroughness that cost at least €100 million ($135 million) to build and includes sewage treatment basins and a decorative pond. It is one of Europe's most advanced facilities, a garbage dump for the 21st century.

But the Cröbern treatment plant was apparently bigger than it needed to be. Residents of the state were not producing enough garbage to keep the plant running at full capacity. It needed more waste. But who was going to provide it? That was the problem faced by Konrad Doruch, the waste treatment plant's chief solid-waste procurer.

Each of the two men, Mr. Miracle and Mr. Doruch, had something the other man wanted. They reached an agreement, and beginning in April 2007, freight trains loaded with waste from Naples started running north to Großpösna almost daily.

It was an arrangement that seemed to benefit both sides. The only problem was that it apparently involved several illegal activities, including the unauthorized handling of hazardous waste, bribery and the establishment of a criminal organization.

Unfortunately for Doruch, the solid-waste procurer in Saxony, the Italian police targeted him in a large-scale investigation dubbed "Operation Ecoballe." The investigators, hoping to get the better of the Neapolitan Mafia, known as the Camorra, intercepted hundreds of phone calls. Companies tied to the Camorra arrange for the transport and illegal disposal of waste, both in Italy and abroad.

In late November, the Italian investigators expanded their efforts to German soil. Prosecutors and police officers searched the waste processing plant in Großpösna and other waste processing and recycling companies in Saxony and the neighboring state of Saxony-Anhalt. The authorities were looking for anything associated with solid waste coming from Italy, including shipping documents, contracts and invoices. The investigation revolved around 150,000 tons of solid waste that had been transported to Germany in 200 freight trains, which apparently should never have been allowed to cross the Alps.

The Italian-German solid-waste profiteering scandals provide insights into a booming industry. According to investigations by Germany's Federal Criminal Police Office (BKA), up to two million tons of household waste have already been dumped illegally in German waste dumps and former landfills. "The extent of the solid-waste profiteering activities is quantitatively and qualitatively unprecedented," and has been completely underestimated by government agencies and politicians, according to an internal BKA study conducted with the goal of putting shady solid-waste deals on the agenda at the next conference of environment ministers in June.

The case of the Cröbern treatment plant shows that it is not always shady demolition companies and landfill operators who are treating law and order the way they treat waste. Even semi-governmental businesses have been suspected of acting illegally in extreme circumstances.

The circumstances were indeed extreme in April 2006, when local politicians in the eastern city of Leipzig met to discuss the crisis faced by the treatment plant operator, the Western Saxon Waste Disposal and Recycling Company (WEV). The company, a majority of which is owned by the city of Leipzig and the surrounding counties, was "in acute economic difficulties, which could ultimately jeopardize its continued existence," the agenda of the meeting reads.

The WEV lost €4.5 million in 2005 alone, and it was time for management to come up with a plan. Decision-makers were in demand, men like Konrad Doruch, a Saxon with a pronounced dialect who has made a career for himself in the waste management business. At first, he was in charge of safety and fire protection at the waste treatment plant, and he was later promoted to the job of sales director.

Between 2003 and 2006, Doruch successfully arranged to have more than 200,000 tons of solid waste shipped from Italy. It was premium material for the plant in Großpösna, including slag from an aluminum plant in Novara and insulation material containing asbestos from Verona. State authorities had granted the Cröbern treatment plant special permission to dispose of the hazardous waste.

The WEV, losing money and lacking enough solid waste to keep its plant running efficiently, sent Doruch back to Italy. This time, however, he didn't procure industrial waste from the north, but household waste from the south, from Naples and the surrounding Campania region, where the Camorra all but controls the waste disposal business.

If what the investigators claim is true, that was when the WEV's methods became illegal. Household garbage from Campania cannot simply be exported to Germany like olive oil or wine.

Since 2005, even German domestic household garbage can no longer be dumped into landfills. Instead, it has to be incinerated or subjected to a complicated procedure, which involves sorting and crushing the garbage, and then removing as much bacteria as possible. German authorities only approve garbage imports if the waste has been properly treated first.

Despite these restrictions, the Saxon and Italian solid-waste dealers tried anyway. Beginning in April 2007, freight trains filled with household waste began departing from the Maddaloni-Marcianise depot about 30 kilometers (19 miles) north of Naples, to be unloaded the next day in Großpösna, 1,500 kilometers away.

Minor incidents like the one that happened on April 26, when a special unit of the Carabinieri, Italy's national police force, ordered foul-smelling containers opened, could not put a stop to the German-Italian garbage connection.

According to the freight documents, the containers were supposed to contain pre-treated waste, or intermediate products in the recycling chain. Instead, the Carabinieri found ordinary household waste from southern Italian kitchens, and seized eight containers. But by the next day, the trains were running again.

Under this system, the contents of 7,500 containers ended up in eastern Germany. It was apparently an extremely lucrative arrangement for the WEV, which is said to have been paid €16 million, or €86 per ton. The politicians from Leipzig and the surrounding areas must have been pleased, now that their prestigious project was finally paying off. Their company, almost bankrupt a year ago, was in the black.

It appears that authorities in Saxony were not particularly interested in the nature of the solid waste being processed in their treatment plants. Investigators believe they can prove that Sales Director Doruch simply lied about the contents of many shipments and promptly shipped the bulk of the waste, a total of 107,000 tons, to treatment facilities run by Andreas Böhme in neighboring Saxony-Anhalt. Böhme, an automotive body specialist by trade, did not have a permit to process solid waste from Italy, but he did own a waste shredder. In Saxony-Anhalt, the solid waste from Naples was apparently re-classified once again, this time as "sorted mineral waste," which qualified it for disposal.

'A Fixed Group' of Criminals

Some of it wound up in a landfill in the town of Freyburg-Zeuchfeld, in Saxony-Anhalt, which was all but shut down in the spring of 2009, after state environmental inspectors had found 300,000 tons of illegally dumped waste at the landfill.

The prosecutors believe they know who is behind the garbage shipments. From the very beginning, says one investigator, "a fixed group of German and Italian criminals" planned to "dispose of the garbage from Campania illegally, because most of it was untreated, in the region of Saxony-Anhalt."

Böhme denies this. His attorney, Steffen Segler, says that his client treated the solid waste from the WEV "properly." Konrad Doruch also rejects accusations that he was involved in illegal garbage profiteering. Doruch, like his former boss at WEV, has since left the company.

The new man at the head of the waste treatment plant has hired an auditing firm to conduct an internal investigation, the results of which will be presented to the WEV Supervisory Board in mid-March. It's still unclear whether, and when, prosecutors in Leipzig and Halle (the state capital of Saxony-Anhalt) will file charges.

Their counterparts in Naples appear to be further along in prosecuting the case. In the fall of 2008, they presented Lorenzo Miracle with an arrest warrant, and two dozen other managers at the treatment plant and officials were temporarily arrested. They all stand accused of being involved in illegal garbage profiteering.

It almost seemed as if these efforts had put an end to the international garbage dealers' work. But that impression is deceptive. In December, another 100 tons of fresh garbage was discovered in a waste dump in Saxony-Anhalt. It was from Italy. 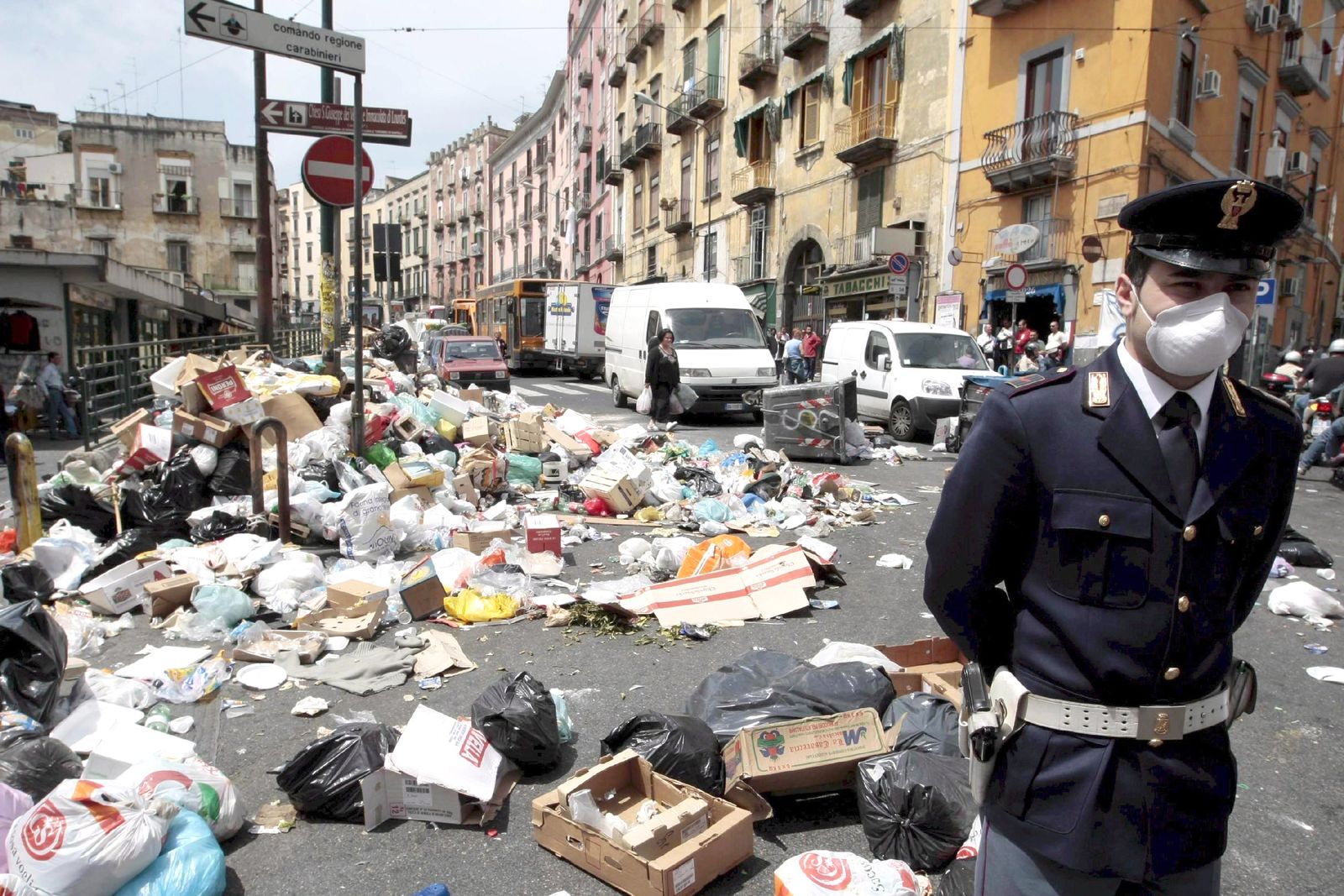 An ongoing problem with waste disposal reached a crisis point in Naples in 2008.