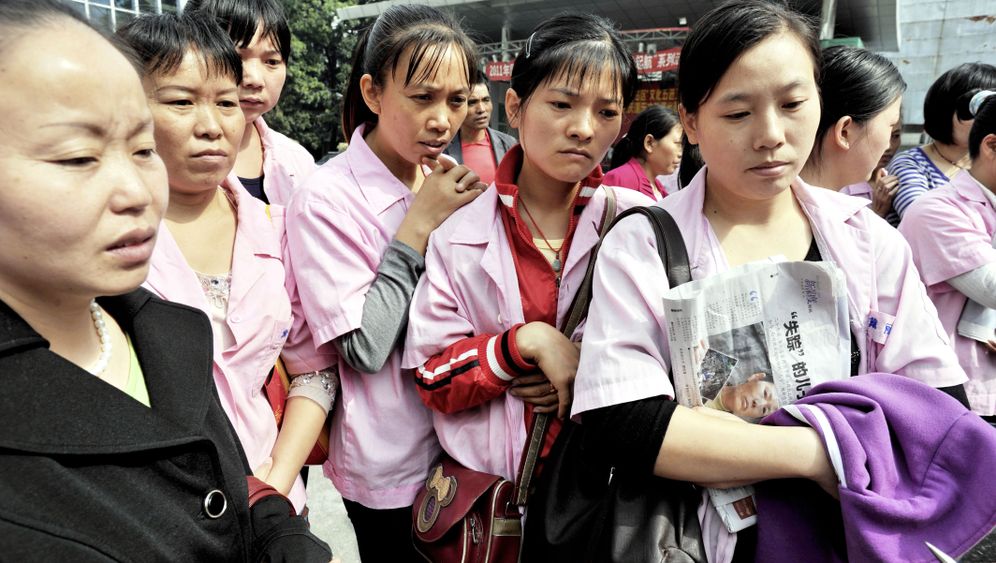 A police special forces unit appears suddenly. One moment, a worker named Liu* is marching back and forth in front of city hall in Dongguan, China, with about 300 colleagues from the bankrupt factory Bill Electronic. "Give us back the money from our blood and sweat!" they chant.

The next moment, their shouts turn to screams as a few hundred uniformed police with helmets, shields and batons, along with numerous plainclothes security forces, leap out of olive green police vans. The demonstration leaders, including Liu, are rounded up on the side of the street by police dogs. Within just a few minutes' time, the communist authorities have successfully suffocated the protest.

The men and women, most of them young adults, are packed into yellow buses and hauled back to their factory, where the government exerts massive pressure: By afternoon, they must consent to make do with 60 percent of the wages they are owed by the employment office. Anyone who refuses, officials warn, will receive nothing at all.

The new global crisis has reached China. Debt problems in Europe, the country's most important trading partner, are starting to dim prospects here in the nation that has effectively become the world's factory, as well. The unstable United States economy and threat of a trade war between the two superpowers make the situation even more uncertain. As the US presidential election campaign starts too heat up, American politicians are vying to outdo one another in protectionist declarations directed toward their communist rival.

This October was the third straight month Chinese exports decreased. Along with it, the hopes of German manufacturers that Asia's growth market might help lift them out of the global crisis as it did in 2008 are also evaporating. This time China faces enormous challenges of its own -- a real estate market bubble and local government debt -- that could even pose a risk to the global economy.

For Liu, the factory worker, his country's economic miracle is certainly over for now. Until recently, he worked 12 hours a day assembling accessories for DVD players. But then there was less and less work to do, he says, and a while back, the boss informed workers that fewer orders were coming in from Europe.

After the police break up the demonstration, Liu, now daunted, wanders through his city's dusty streets, passing row upon row of factories and residential buildings. "We just wanted our full wages, but they set the police on us," he says. He's lost his faith in the party and the government.

Especially here in the export region of Guangdong, an experimental laboratory of Chinese capitalism, hardly a day goes by without new bankruptcies or protests. The Yue Chen shoe factory in Dongguan, which produces athletic shoes for a parent company in Taiwan that supplies brands such as New Balance, is in a state of emergency. With orders dropping off, the manufacturer has fired 18 managers. Workers have seen overtime pay eliminated, and normal wages are barely enough to live on. Frustration is so high that some shoe factory workers also went to protest in front of city hall. About 10 of them were injured in the clash with police, some young women from the factory report.

The situation outside the gray factory complex is tense. Thugs in plainclothes guard the entrance, photographing and intimidating anyone who talks to the workers. Inside the factory, the showdown between bosses and employees goes on. Workers sit inactive in cheerless factory rooms. The management has switched off the power in some of the halls where workers normally sew and glue together shoes.

In the rest of China as well, more and more assembly lines are grinding to a halt. In Wenzhou in eastern China, a city known for making cheap lighters, shoes and clothes, a large number of business owners are on the run from their creditors, the private shadow banks that last lent them money. Some of these businesspeople even secretly removed machinery from their factories before taking off.

Demand Drop in Europe and China

China's showcase industries are also feeling the crunch of the drop in European demand. Suntech Power Holdings, for example, which manufactures solar panels in Wuxi, near Shanghai, reported third-quarter losses of $116 million (€87 million). During the same quarter of the previous year, the company generated $33 million in profits.

Just recently, Asia's champion exporter was the object of admiration from foreign executives and politicians, a victor in the global financial crisis. Some even believed they'd found a superior alternative to crisis-ridden Western-style market economies in Beijing's authoritarian-style capitalism.

German carmakers, in particular, let themselves be carried away by China's growth and made enormous investments. China is Volkswagen's most important market, and the company hopes to sell 2 million cars there by the end of this year.

But the car boom is slowing. "We haven't received a single new order in nine days," admits a smartly dressed salesman at Dongguan's Porsche dealership. "We've never experienced that before." Many business owners are short on cash, he adds. "They used to mostly pay cash, but now they prefer to buy on credit."

Cheap Chinese brands such as BYD ("Build Your Dreams") are also having a harder time selling their cars. Important governmental tax incentives for buying cars ran out last year, and major cities such as Beijing are attempting to ease their congested streets by restricting the number of new automobiles. In October, people in China bought roughly 7 percent fewer cars than in the previous month.

At first, it seemed as if Beijing's state capitalists had found the magic recipe for endless growth. In 2009, they pumped 4 trillion yuan (the equivalent of €430 billion) -- China's largest stimulus package in history -- into building ever more modern highways, train stations and airports. Tax incentives led millions of farmers to purchase refrigerators and computers for the first time.

More or less on the party's orders, banks threw their money at the people's feet, and local governments were particularly free about getting themselves into debt. By the end of 2010, outstanding debt stood at 10.7 trillion yuan -- nearly a quarter of China's entire economic output.

Much of these funds went, directly or indirectly, into real estate construction. Local governments discovered that selling land for building made for a lucrative source of revenue -- and of collateral, so banks would continue to issue new loans. Thousands of farmers were driven off their fields so that villas and apartment buildings could be built.

Many of those development projects, often megalomaniac undertakings from the start, are now ghost towns. In China's 15 largest cities in October, the number of newly auctioned building plots decreased by 39 percent compared to October 2010.

While many in the West hold out hope that China can solve the euro and dollar debt crisis with its foreign currency holdings, the rift between rich and poor within the country is growing. The "harmonious society" promised by Hu Jintao, head of the government and of the Communist Party, is at risk.

The country's central bank has increased interest rates five times since mid-2010 to get inflation under control, while at the same time forcing banks to hold larger reserve funds. Beijing hopes this method will allow it to orchestrate a "soft landing" from its own economic boom. But the maneuver entails risks. Along with the construction industry, the motor driving China's economy up until now, other sectors such as cement production, steelmaking and furniture construction stand to lose vitality as well.

If the real estate bubble bursts, it is sure to turn China's rising middle class against the government. Until now, the nouveau riche has viewed the Communist Party as a guarantee of their own prosperity. Recently, however, outraged apartment owners organized a demonstration in downtown Shanghai, protesting the decline in the value of their property.

Wang Jiang, 28, points to a nearly complete apartment block in Anting, one of the city's suburbs. The software company manager bought an apartment on the 16th floor of the building for €138,000 in early September. It was a steep price for 82 square meters (883 square feet), especially since the building is located in an industrial area, hemmed in by factories and highways. But Wang was determined to get in on the boom. He didn't even take the time to view the housing complex before he bought the apartment. Where else, after all, should he have invested his assets, if not in real estate?

Now China's state-run banks are paying their customers negative interest and Shanghai's stock market is considered a high-risk casino, where a few major governmental investors are believed to manipulate exchange rates at will.

Wang's apartment isn't even finished yet, but he no longer feels any joy about moving in -- not now that the real estate company is offering similar apartments in the same complex for about 20 percent less.

Wang feels he was deceived about his apartment's resale value. "What are they thinking?" he demands. "Surely they can't just erase a portion of my assets?"

Wang and many other furious apartment owners went to the real estate company's salesroom to protest the drop in value. Suddenly, Wang relates, someone started smashing the miniature models of apartments. After that, in the blink of an eye, the company's guards grabbed him and hauled the protesters to the police in minibuses. "We were interrogated until 2 a.m. in the morning," Wang says. Some of the protesters, he adds, are still in prison and authorities won't tell their families anything.

Whether in Dongguan or Shanghai, cracks seem to be forming everywhere in Chinese society. As long as the one-party dictatorship kept growth in the double digits, most people accepted their lack of freedom. Now, though, Beijing is facing a dilemma. Tough police crackdowns will hardly get the consequences of the stagnating economy under control in the long term. But nor are government subsidies enough to stimulate the economy. It seems neither money nor force will help.

The economic situation now is far more complicated than it was after the 2008 global financial crisis, says economist Lin Jiang. In 2008, Chinese exports collapsed and roughly 25 million migrant workers had to return from factories to their home provinces.

Back in Dongguan, authorities have no cause at the moment to fear any further protest from Liu, the factory worker. He's too busy looking for a new place to stay. When he lost his job, he also lost his spot in one of the electronics factory's residences.

* Liu's name has been changed by the editors in order to protect his identity.