The body of the young woman had been stored in the Garibaldi Hospital in Catania for a whole week before Sister Chiara showed up. But after taking one look at the dead woman's face, the nun knew immediately who it was lying cold and stiff on the gurney: Elena, a Nigerian prostitute who had plied her trade on highway SS385 on the Italian island of Sicily.

The woman had been found dead in a garage. There had been an explosion and police initially suspected an accident with the natural gas heating system. But during the autopsy, signs of foul play were discovered and prosecutors in Catania launched an investigation.

Sister Chiara was ultimately the only one able to identify Elena. The two women, after all, shared a story that had begun way back in June 2017.

It is the story of Nigerian women who dreamed of making it to Europe someday, but who immediately landed in prostitution once they did. And it is the story of an Italian nun who is helping these otherwise overlooked women and giving them a voice.

It is also a story of failure -- by society, by policymakers and by Europe.

The story centers around a road that has no name, only a number: SS385. It is a highway connecting Sicily's second-largest city, Catania, with Gela, roughly 100 kilometers away through the rural hinterlands. This is where Elena worked.

Sister Chiara tells her side of the tale in her convent in Caltagirone, a town in the Sicilian hills between Mt. Etna to the northeast and the coast to the southwest. When she talks, she is so animated that her headscarf repeatedly slides off her shoulders, forcing her to constantly grab it and push it back into place.

"The thing with me and the prostitutes started a couple of years ago. I was returning from Palermo after a trip and kept seeing white, plastic chairs in the bushes on the side of the road, around almost every curve. Women were sitting on some of them, many of them wearing tights and high-heeled shoes. Some of the chairs were empty."

The nun learned that up to 80 percent of the women who migrate from Nigeria to Italy end up in the clutches of criminals and working as prostitutes. She also learned that each day, some 10,000 Nigerian women, many of them underage, stand on the side of Italian roads waiting for johns. Their number has risen in recent years.

"Nobody cares about the women."

The women are easily blackmailed because they often have to pay back the costs of their journeys to Europe. Increasing their vulnerability is the fact that they are often in the country illegally and some of them have forged passports. According to the International Organization for Migration (IOM), the number of victims of human trafficking across the Mediterranean increased by 600 percent between 2014 and 2017.

The nun also learned that the women are often under the control of the Nigerian mafia, who frequently establish contact with the women before they even leave their homeland, provide them money for their journey and then blackmail them with that debt once they arrive in Italy. The Nigerian mafia, and subgroups like the "Black Axe" and the "Supreme Eiye Confraternity" have built up stable structures in Italy and a broad extended network in Europe. They demand exorbitant sums for the trip, up to 50,000 euros. The women's customers, meanwhile, pay only 5 to 15 euros.

"Something has to be done, I thought. I rented a car, filled up a thermos with coffee and wrapped up breakfast in paper. I then headed out to the road and to the women. It is a place of silence – silence born out of fear. The traffickers put lots of pressure on the women and they are kept under surveillance. In the beginning, the women were extremely careful in their interactions with me. 'We are sisters,' I told them. Because I don't wear shoes, they initially thought that I was the one who needed help and they offered me shoes. It was almost funny, and from that point on, the women trusted me. Poverty was the bridge."

Sister Chiara is 39 years old and originally from Sicily. She used to be opposed to the church, in favor of feminism and for women's right to choose. She was against rules and for freedom. But then her brother fell seriously ill and she began to pray. Today, she is a member of the Franciscans, a religious order centered around the ideals of poverty and charity. She lives in a house with no electricity and never wears shoes, even in winter. To this day, Sister Chiara remains a rebel. 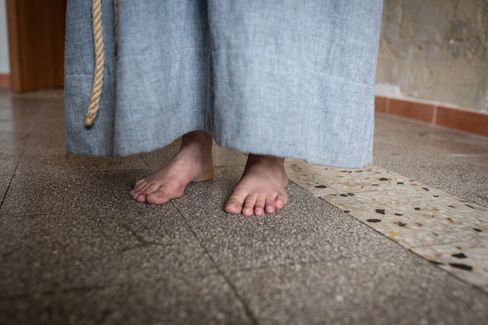 Sister Chiara never wears shoes, not even when the weather turns chilly in winter.

"The men who control the women are referred to as 'protectors,' but in reality, they are criminals who oppress the women. They park their cars in the bushes and keep an eye on the street and on the customers and also watch out for police. Though there are almost never raids here. Nobody cares about the women.

I'm not afraid. The men know I'm here, but they leave me alone. Every now and then, one of the customers will complain. 'What's the nun doing here?' some ask. They find my presence disturbing, particularly when I show up at the lunch hour. There are a lot of customers on the street at that time."

Lunchtime it is, then. SS385 starts behind a nature reserve, where the hills are full of mandarin and olive trees. The road itself is a sandy track edged by fences full of windblown trash. Most of the white plastic chairs along the highway are unoccupied. An empty chair often means the woman who normally occupies it has found a customer. Old men, generally.

"Many Italians think that these women have freely chosen this way of life. But no woman would choose this."

The blackmail these women are exposed to is two-pronged. On the one hand is the vast debt that they must repay. On the other is their belief in voodoo magic -- in this case, a vow the women are loath to break and thus don't dare to leave sex work behind, even if they could. In Germany, too, the combination of voodoo magic and prostitution is a problem. In June 2019, police in the state of Hesse arrested several members of the Nigerian mafia.

Nigeria has the highest population of any country in Africa and two-thirds of the population lives in extreme poverty.

"In the beginning, I offered to take the women to a doctor for a medical checkup -- for pregnancy or HIV tests, if they wanted. But it wasn't quite as easy as I had imagined it to be: The women were very afraid of leaving their place of work. So we came up with a different plan: Now, an ambulance regularly comes by and provides the women with medical care. The women never ask for condoms or other contraceptives. I don't think they are ashamed, it's more a question of dignity. The women prefer to take responsibility for contraception themselves."

The frames of Sister Chiara's glasses are broken and she has taped them together with Scotch tape. She says that they she occasionally invites the women to her convent for dinner and that they also came by for Christmas. Two other nuns have also begun helping out. Chiara frequently heads out to the road to pray with the women and to simply listen to them, though she says that she does not try to convince them to leave prostitution behind. Still, she wants to help them understand that they have a choice. That there are places like IOM where they can turn to in order to file an official application for asylum.

Then Sister Chiara tells the story of Elena. In January 2019, the young woman suddenly stopped showing up on the side of SS385. Days went by without a trace. Then, a local news outlet reported that there had been an explosion in a garage in Catania and that a woman's body had been found. It was near where Elena had lived.

"When the women heard about it, they were shocked. 'Maybe it's Elena!,' they said. They asked me to help, so I drove to the hospital where the body was being kept and looked at her face. I knew it was Elena and that the woman who had once laughed so much had suffered a terrible death."

Sister Chiara says that Elena's death changed the street and that the women have become more careful, also in their interactions with her. There were several raids and five men were arrested and charged with human trafficking. Even a year after Elena's death, investigators still have not been able to determine exactly how she died, and the case could soon be closed.

When Elena was buried, many of her colleagues from SS385 were there. They read a passage from the Gospel of Matthew: "I was a stranger and you welcomed me." Elena is now in the cemetery of Catania, not far from the mass grave containing 200 people who died while trying to cross the Mediterranean. 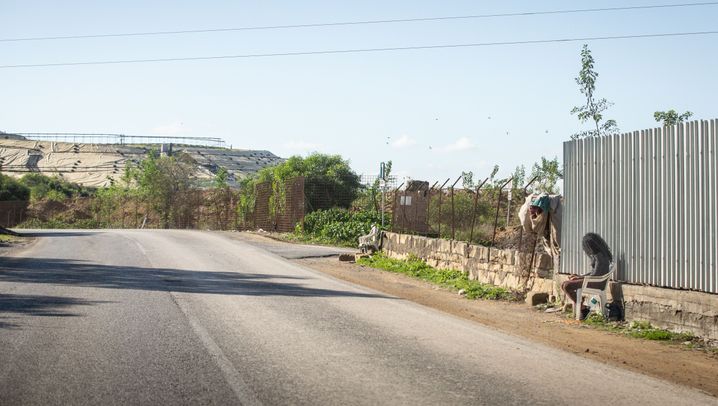 In her convent, Sister Chiara pushes aside a curtain to reveal a closet. Inside are donations that she soon plans to bring to the women: winter jackets, mobile phone cases, a baby carrier, even boardgames. But the most important thing, she says, aren't the donations. The most important thing is that the women are seen and that they are reminded over and over again that they can take steps to defend themselves.

"Many Italians think that these women have freely chosen this way of life," she says. "But," she adds, "no woman would choose this."

With additional reporting by Alessandro Puglia 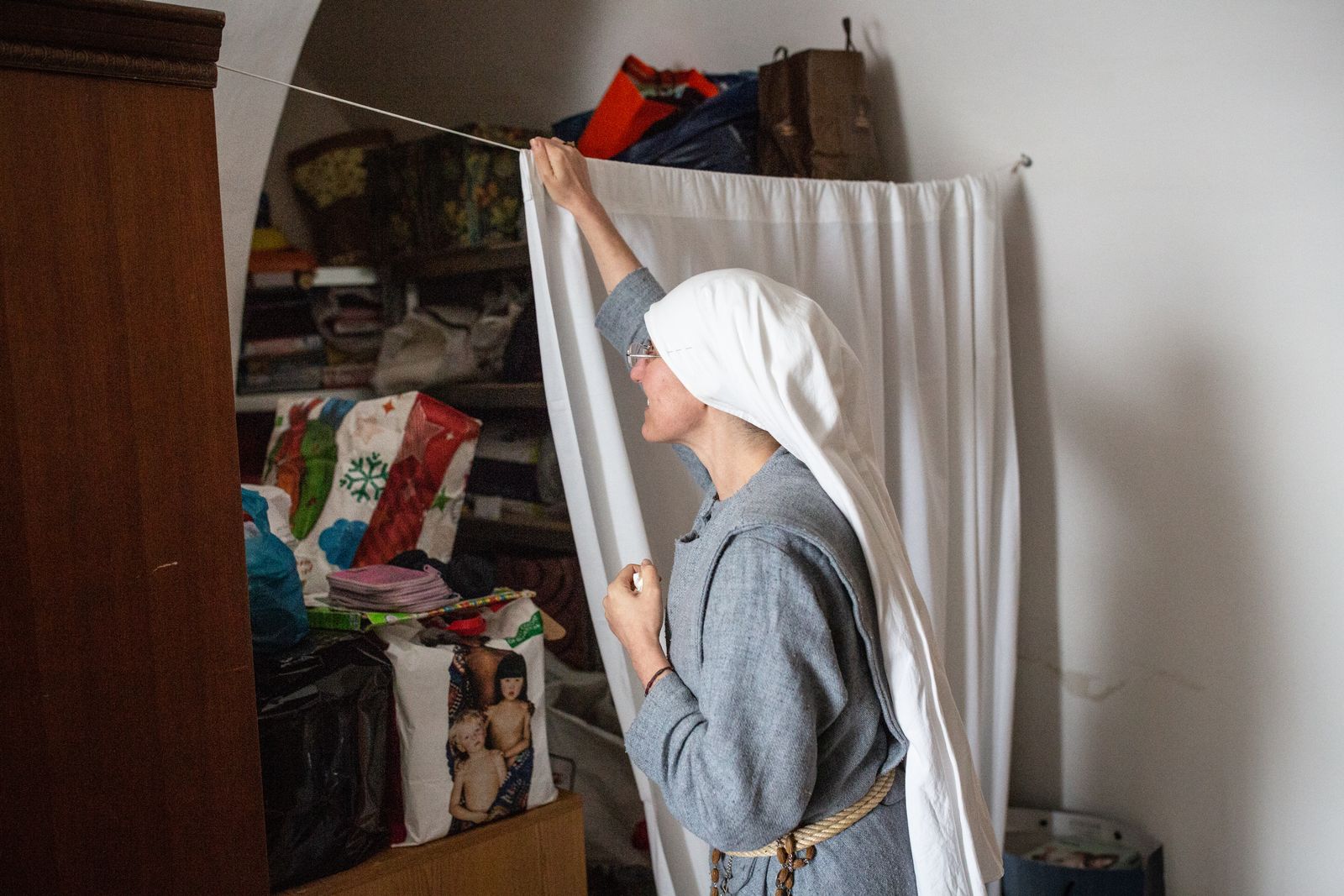 Sister Chiara collects donations from people in Caltagirone to help the women. 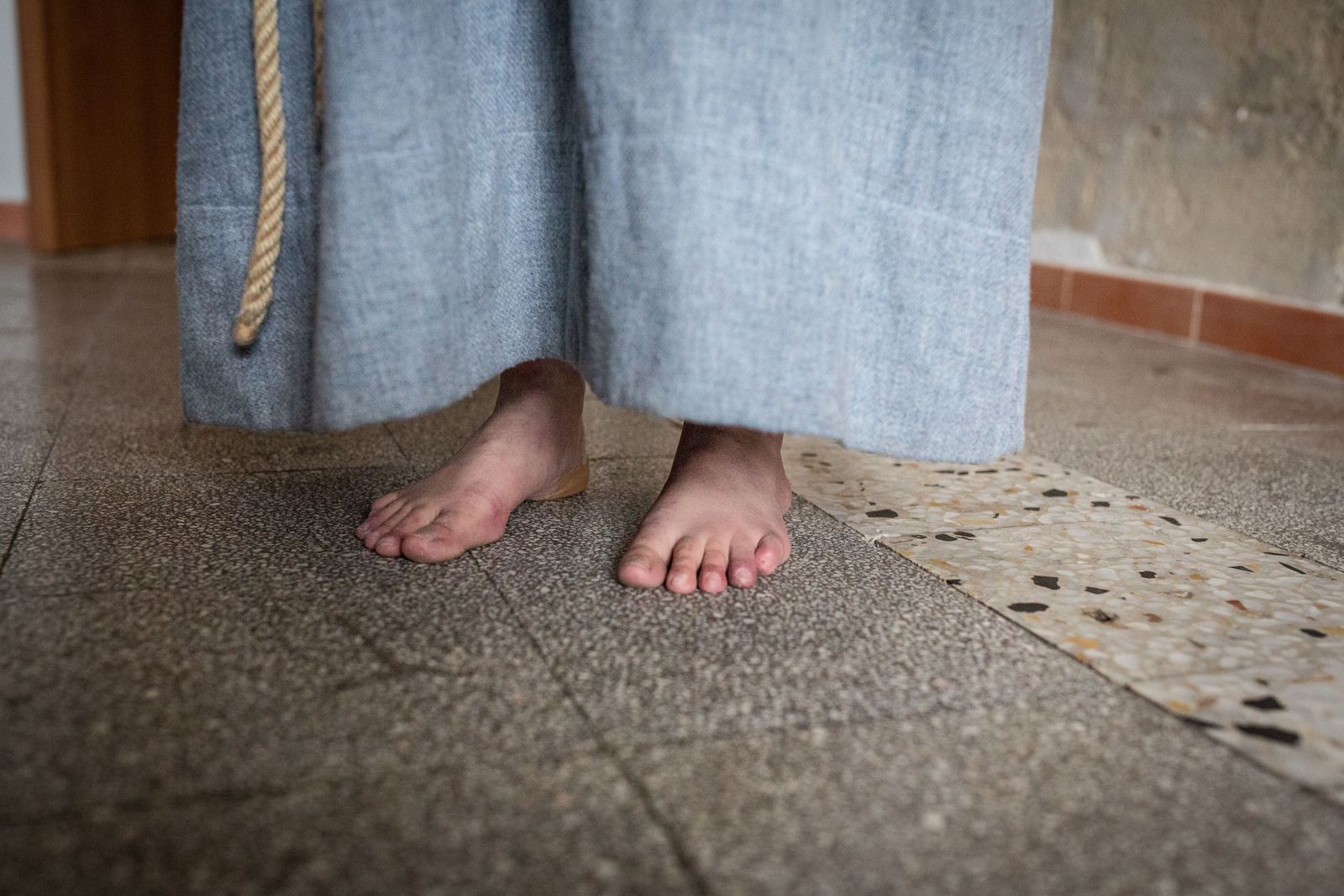 Sister Chiara never wears shoes, not even when the weather turns chilly in winter. 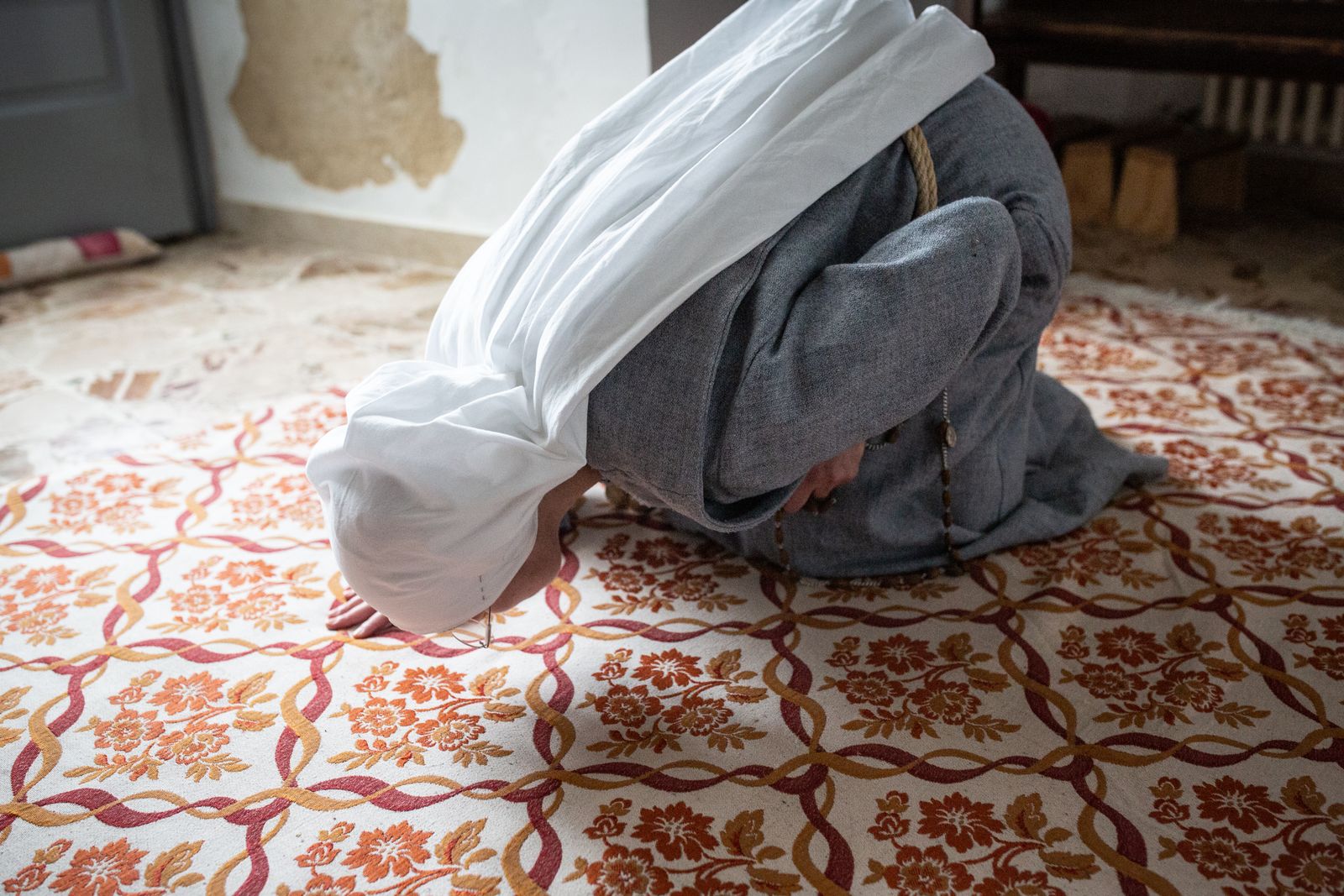 Sister Chiara was the only one who was able to identify Elena. 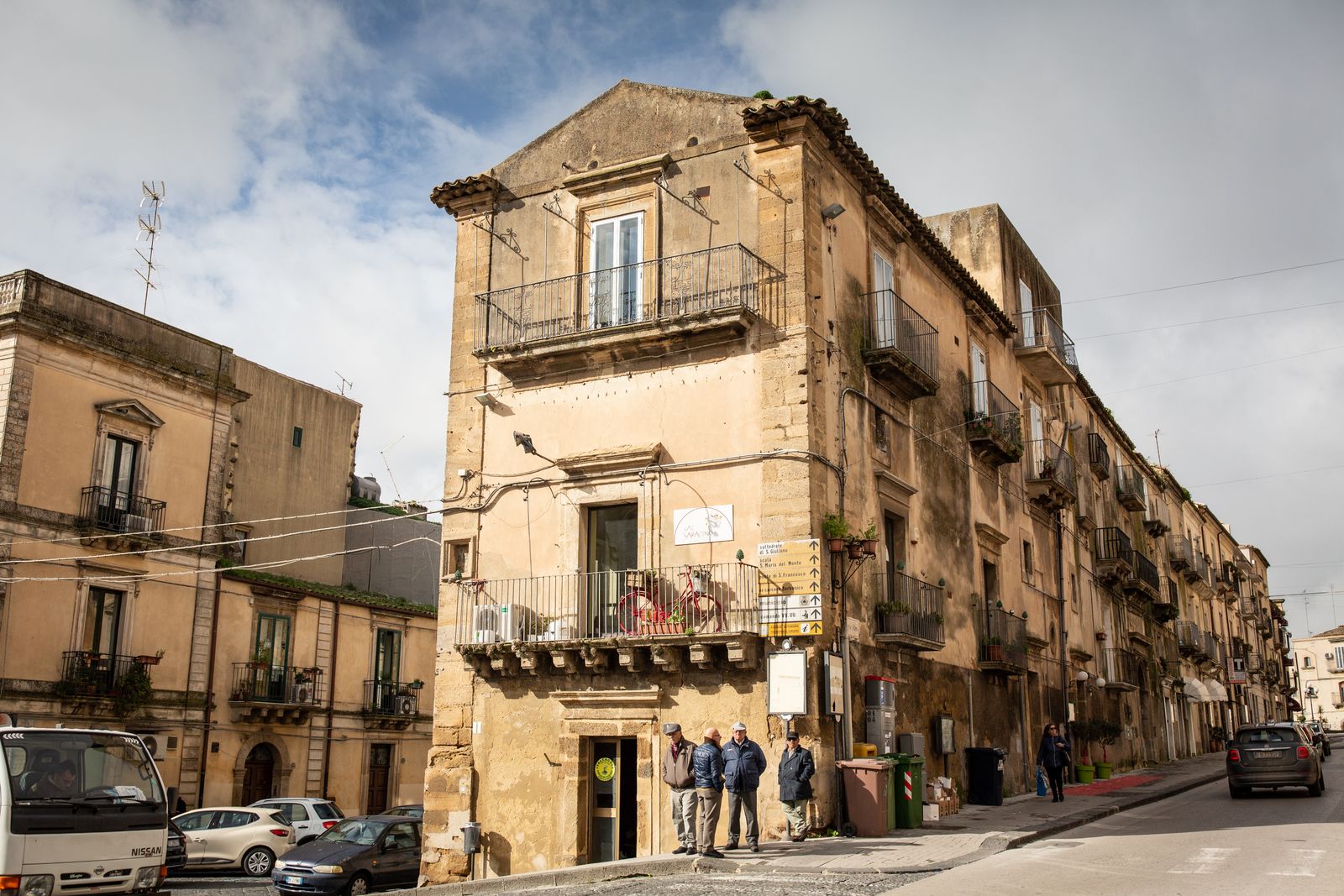 Caltagirone is a small city in the Sicilian hinterlands. Three nuns -- Bernada, Marta and Chiara -- live here in the convent.