In the end, it was like dominoes. French President Nicolas Sarkozy indicated his agreement early in the week; the rest of the euro zone leaders followed just prior to the beginning of the European Union summit in Brussels on Thursday evening. Spanish Prime Minister Jose Luis Rodriguez Zapatero, Luxembourg's leader Jean-Claude Juncker, European Central Bank boss Jean-Claude Trichet -- one European torch-bearer after the next gave up their opposition to German Chancellor Angela Merkel.

The plan that Merkel has been promoting for weeks was part of a German-French paper approved by the heads of the 16 countries belonging to Europe's common currency zone just prior to Thursday's banquet dinner. The central point: Should Greece slide to the brink of bankruptcy in the coming months, the International Monetary Fund is to be part of the solution.

Merkel made the inclusion of the IMF a condition for her approval of any European Union aid plan for Athens. Rather than the European Commission -- bereft as it is of experience with national bankruptcies -- Merkel would prefer the professionals from the IMF, much to the chagrin of her EU partners. Many are concerned that calling in the IMF, which is largely funded by the United States, could open the door to American influence over European budgetary policy. Others were worried about a loss of prestige for the euro and Europe.

The German chancellor's victory over the so-called "Club Med" faction -- France, Spain, Italy, Greece and Portugal, all of which had originally voiced opposition to her IMF plans -- had seemed likely since Tuesday. Indeed, Merkel was able to bask in a brief ray of domestic popularity as a result. Even the tabloid Bild found room for a bit of Merkel-related triumphalism. "By taking on our chancellor, Europe has bit off more than it can chew," read the paper's Thursday headline.

Keeping Greece Off the Agenda

For weeks, Merkel has been unmovable. Not only did she exclude the possibility of any concrete pledges of assistance for Greece, she didn't even want the topic discussed on the European level. France and Spain had proposed staging an extraordinary summit of euro zone countries. Merkel, though, said she didn't know what there was to talk about. She also did everything she could to keep the topic of Greece off the agenda for the Thursday and Friday summit in Brussels.

But with the euro exchange rate dropping to ever-deeper lows this week, she ultimately realized she would not be able to avoid addressing aid for Greece this week. She came up with three conditions: IMF involvement, European aid only as a last resort and more stringent Stability Pact rules. The other leaders had no alternative but to support her line -- the financial markets would have hardly taken seriously any emergency plan without the involvement of Europe's largest economy.

Thursday's declaration agreed to by the euro group fulfils two of the three German conditions: The IMF's involvement and a precise definition of "last resort" -- i.e., when exactly can Greece be granted assistance. Before any money flows, all 16 euro zone countries must first agree there is an emergency.

Merkel only failed to enforce her third condition, a tightening of the Stability Pact. To do this the Lisbon Treaty would have to be amended -- something which is viewed as unrealistic given the difficulties encountered in passing the treaty in the first place. Instead, a working group was set up to consider new sanction mechanisms for those countries which violate EU budgetary rules.

Her Brussels colleagues caught a glimpse of a new side of the German Chancellor. They already knew her as an agenda-setter and a hard gambler, in keeping with the fundamental rule of Brussels negotiations that you only reveal your cards at the very end. Still, in the past, she has always been willing to compromise. But this time she was not prepared to give in and stubbornly insisted on her position. The mood in Brussels was tense.

Merkel sees the new German toughness as providing a way forward for the euro zone. Someone has to stand up for the currency's stability, seems to be her position. Indeed, she even appeared prepared to abandon her famous pragmatism in her defense of the euro. But there is room for doubt about her new identity, not least because there is a clear domestic political motive: Her center-right coalition is facing a crucial election in the state of North Rhine-Westphalia in May. She needs all the positive headlines she can get.

The question remains: Did Merkel really do Germany a favor with her demonstration of power? The chancellor's apologists insist that there was little else she could have done. Had she not remained firm, speculators may have begun zeroing in on Portugal and Spain in addition to Greece. Furthermore, there was the threat of a constitutional challenge in Germany to aid for euro zone countries and concern that voters could have lost faith in the European project altogether.

Whether any of that would actually have happened is up for debate. It has already become clear, however, that Germany's image in Europe has taken a hit. Merkel's course has resulted in bewilderment in capitals across the Continent. Her insistence that Greece not be placed on the summit's agenda seemed irrational. And the way in which Merkel then dictated her demands only added to the alienation.

Indeed, Merkel's achievements appear rather small when set against Germany's loss of reputation in Europe. Furthermore, the IMF's contribution to solving the Greece crisis, should it become necessary, would reduce Germany's share of any bailout by only a little. It is likely that Berlin would still have to contribute billions to any bailout -- according to the European Central Bank formula, 27 percent of bilateral aid from Europe would come from Germany. Berlin also contributes 6 percent of IMF funds.

But for Merkel, the precedent the decision would set was the more important consideration -- a precedent that would have a major impact on the health of the euro. Only time will tell whether her new aggressive tone was merely temporary.

There is, however, one cautionary tale as to how things can turn out when politicians play to the domestic audience from the European stage. Ever since Margaret Thatcher's day, British leaders in Brussels have continued insist on the "British Rebate," a UK kickback on their contribution to the EU budget. It is an issue that never fails to disgust the Germans. 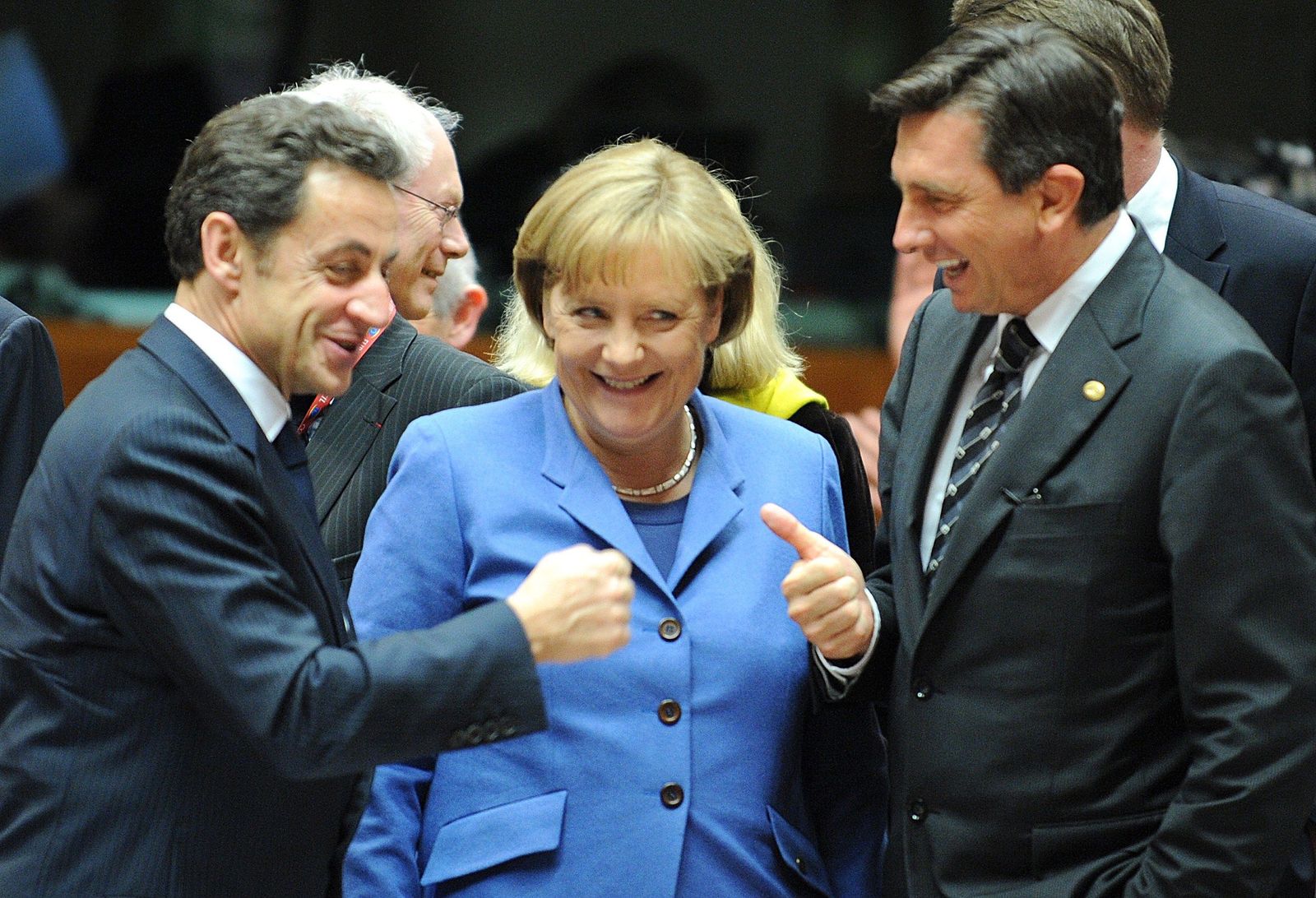 German Chancellor Angela Merkel managed to bring the rest of the European Union around to her position on Thursday.