Will Greece obtain fresh aid or slide into bankruptcy? Those will be the fundamental issues at stake when Greek Prime Minister Antonis Samaras travels to France and Germany this week for meetings with French President François Hollande and German Chancellor Angela Merkel. Even though the talks won't result in official decisions, the two most important politicians in the euro zone will know after these meetings just what they can still expect from Greece -- and they will draw the necessary conclusions.

For the currency union as a whole, however, the Greek tragedy itself is merely a prelude to the real battle to save the euro. If Greece actually did go bankrupt or left the currency union, the main priority for the rest of the bloc would be to use every means possible to prevent a further dissolution of the euro zone -- even if these means have some quite problematic aspects.

The key issue will be to prevent the remaining crisis countries from suffering the same fate as Greece. The main priority will be to prevent the yields on Spanish and Italian government bonds from rising any further. Spain already has to pay very high risk premiums compared with Germany. For 10-year German government bonds, investors last week demanded an interest rate of about 1.4 percent. For Spanish bonds, the rate was 6.7 percent.

As a result, Spanish interest rate payments are rising even though the government is doing all it can to cut spending. That is making it even harder for Spain to break out of the vicious circle of debt, austerity and recession.

Experts fear that if Greece becomes insolvent, investors will panic and demand higher interest rates from Spain or Italy. That would force the two countries to seek external aid.

Currently, discussions are focusing on three possible ways to halt the dramatic rises in interest rates for sovereign bonds:

• providing unlimited firepower for the permanent euro bailout fund, the European Stability Mechanism (ESM), by providing it with a banking license that would, de facto, give the institution the ability to print money

All three proposals have one thing in common: They've never been attempted before and it's almost impossible to foresee what consequences they could have. With each proposal, experts are warning of potentially dangerous side effects. But the euro-zone countries and central banks may have to opt for one of them -- and choose the lesser of three evils.

Euro bonds are meant to obscure the differences in creditworthiness among the individual euro-zone member states. Regardless whether the borrower is Italy, France or Germany, all euro-zone states would issue common bonds. Given that Germany would be a part of this and would also be a guarantor, the hope is that interest rates on such bonds would be significantly lower than the rates paid right now for Italian sovereign bonds, for example. Their introduction would reduce the borrowing costs for crisis-plagued euro-zone countries. Europe would also send a clear message to the financial markets that its member countries stand together.

The major problem with common debt issuance is the lack of scope for enforcing fiscal discipline. Experts see a risk that ailing countries will simply continue to borrow, unhindered, as soon as the bill is shared by the entire euro zone. "Euro bonds create the wrong incentive," says Holger Schmieding, chief economist at Germany's Berenberg Bank. "The German federal parliament would only have to give its approval once and suddenly countries like Italy would from then on have a license to borrow with a German guarantee."

Euro bonds wouldn't solve the current acute crisis -- and they are also vehemently opposed by the German government. Nevertheless, the creation of euro bonds may be debated again if governments succeed in stabilizing the euro. In the long term, even German Finance Minister Wolfgang Schäuble of Chancellor Angela Merkel's conservatives supports the idea of a common European fiscal policy, and shared debt would be part of that. But a solution needs to be found that would ensure discipline in the individual states. It will only become apparent in a few years' time whether the new European fiscal pact can curb debts in the long term.

ESM Pulls Money out of Hat

ESM Pulls Money out of Hat

This autumn, the permanent euro bailout fund is expected to be launched. The European Stability Mechanism (ESM) will provide a common fund for the euro-zone countries for dealing with the debt crisis. The intention is also that the ESM would be capable of financing possible aid programs for troubled countries like Spain and Italy. There's a hitch here, though: The ESM doesn't have enough money in its coffers to bail out such heavyweights. It won't achieve its total lending capacity of €500 billion until mid-2014, and even that sum would be too little for fighting euro fires in the larger euro-zone countries.

For months now, euro-zone politicians have been discussing an alternative for increasing the means available to the rescue fund without national governments being required to provide further money. The trick is to provide the ESM with a banking license that would allow it, in practice, to borrow as much money as it needs from the European Central Bank. The ESM would simply buy up bonds from crisis countries and then provide these to the ECB as collateral for loans, just as normal banks do.

ESM could then print fresh money in order to purchase new bonds, which in turn would be deposited as securities for further loans. This would provide the ESM with unlimited access to money in order to reduce the interest-rate burden on countries. The advantage here is that, unlike the ECB, which can only buy bonds on secondary markets, the ESM could purchase them directly from a government at face price. There are no investors as intermediaries as is now the case with ECB sovereign bond purchases.

There are several objections to the ESM trick, which is essentially tantamount to pulling money out of a magician's hat. For one, the ECB has so far refused to view the rescue fund as a business partner or lend money to it. The central bank's statutes forbid it from financing governments, and the ESM is very clearly a state institution. That's why some economists, like Michael Hüther, the head of the influential Cologne Institute for Economic Research (IW), are calling the proposal "a breach in the dyke".

The reservations are even greater among politicians in Berlin, where fears are growing that Germany's potential liability for the ESM could become a bottomless pit if the fund were bestowed with a banking license. So far, the German government has set a clear limit for its contribution to the fund: The country is willing to guarantee up to €190 billion. But this limit would no longer make any sense if the fund were provided with unlimited firepower.

"If this is the path chosen, one mustn't set a limit on liability," said Thomas Straubhaar, director of the Hamburg Institute of International Economics (HWWI). "Otherwise it would carry the danger that you had to keep injecting additional money -- and it is precisely this constant state of being driven by the markets that the banking license would be intended to prevent."

Despite the possible side effects, Straubhaar still considers the proposal to be a "sensible alternative" to the crisis policies that have been pursued so far. "One simply has to accept the risks involved," he says.

The ECB Tackles the Market

The last resort in the crisis is the European Central Bank. The words of ECB chief Mario Draghi carry such weight in financial markets that he can seem like Jesus speaking to his disciples. A few mere hints that the ECB might intervene and purchase bonds was enough in recent days to drive yields on Spanish government securities back under the critical level of 7 percent.

Earlier this week, SPIEGEL reported on information that the ECB is currently debating a proposal based on this idea. Under it, the central bank would set a cap on the upper limit for interest rates on the government bonds of heavily indebted euro-zone countries. Right now, for example, it could be set at 6 percent. If yields on bonds threatened to exceed this limit, the ECB would intervene and purchase securities on the market. Given its unlimited resources, it would essentially have inexhaustible funds for these purchases.

In the best case-scenario, at least that's the hope, the ECB wouldn't even need to take the action -- just threatening to do so would lead investors to capitulate. "If the ECB makes clear, 'thus far and no further,' then speculators will be faced with the choice of either submitting to the ECB's dictate or not doing any more business at all," says HWWI boss Straubhaar. The latter, he says, "isn't to be expected" because the euro zone remains an attractive place to invest.

With yield caps, the ECB would become a tool of the euro-zone member states -- a development that would be extremely controversial for an institution that is supposed to be independent. The central bank is reliant on the trust of financial market participants. But if it began indirectly helping countries to print money, it could damage that trust in the longer term.

There's also a question of political control: Who will monitor and control which bonds the ECB purchases and at which level a yield cap is to be imposed? There's a clear disconnect here: The ECB isn't answerable to any parliament, and setting fiscal policy is among the most important tasks parliaments are responsible for.

To address that problem, economist Schmieding argues that a political institution -- the ESM, for example -- should decide which countries receive bond aid and the conditions which they must fulfil in order to obtain it. It would also be tasked, working together with the ECB, with determining the level at which the interest rate cap would be applied. "This solution," Schmieding says, "would be the cleanest." 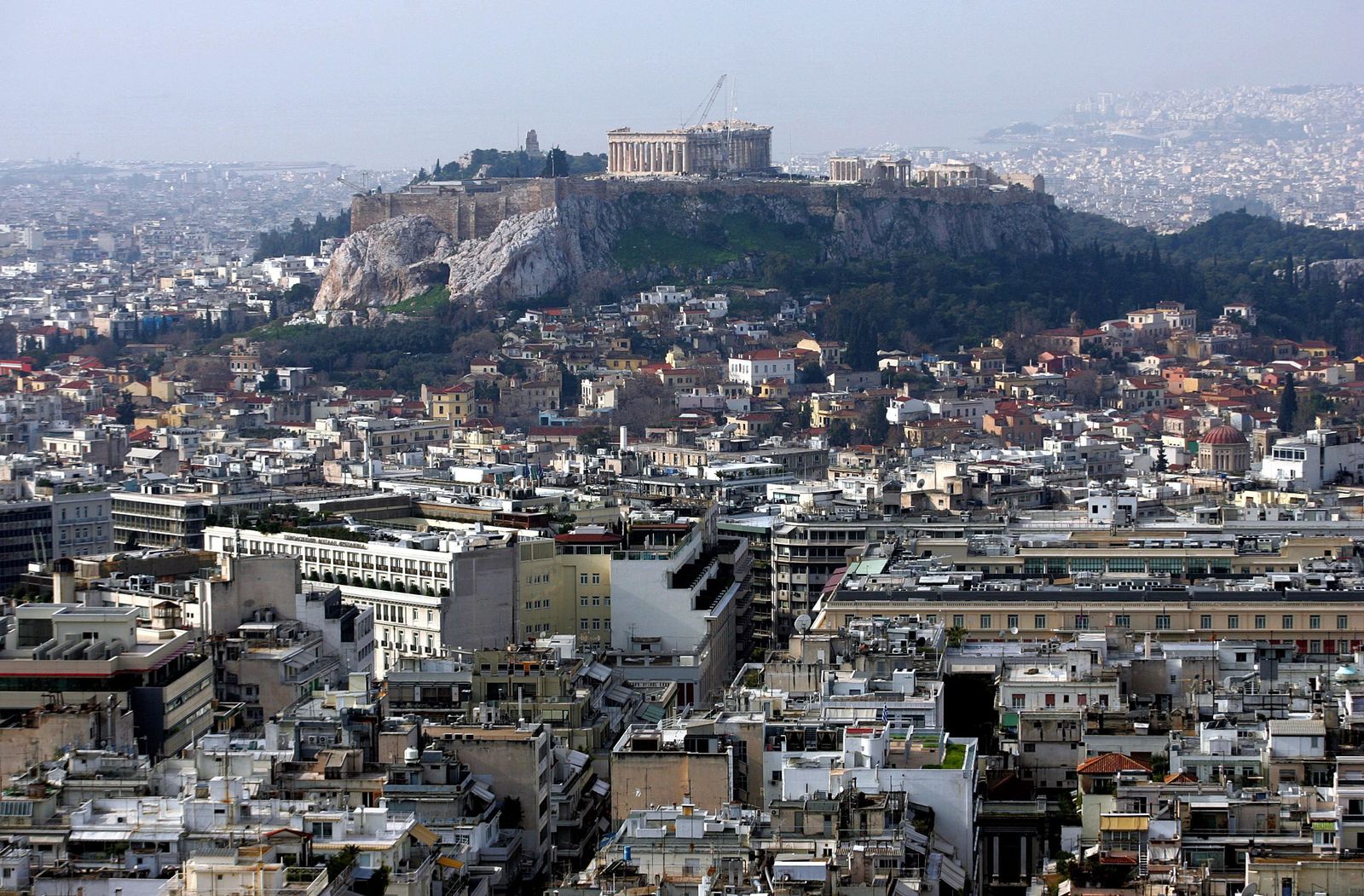 Athens and the Acropolis: If Greece goes bankrupt, market fears will likely be exascerbated.