It wasn't all that long ago that Europe's top monetary policy experts and the leader of the European Union's most important member state were politely exchanging compliments. Jean-Claude Trichet, president of the European Central Bank (ECB), praised German Chancellor Angela Merkel for having made Germany into an "example for all of its neighbors." Merkel, for her part, thanked the Frenchman for his decidedly "successful actions."

A few years and a crisis later, the relationship has cooled off considerably. Merkel feels that the Frankfurt-based monetary watchdogs are pressuring her inappropriately, while Trichet and his fellow bankers have taken to characterizing the Berlin government's proposals as "incorrect," "illusory" or simply as a "catastrophe."

Today, members of the German government and the ECB seem to have trouble spending time in the same room together. At a recent meeting of finance ministers in Luxembourg, Trichet stormed out of the room after being confronted with yet another crisis plan from Germany that he didn't like.

The controversy revolves around the future of the common currency, which instruments ought to be used to rescue the euro and, not least, a workable plan to support ailing Greece. While Merkel has long advocated a cautious restructuring of Greece's debt, Frankfurt-based Frenchman Trichet categorically rejects any form of debt deferral for Athens.

The cold war between Berlin and Frankfurt reached a new high last week. Should Germany implement its plans, the ECB would have to cut off funding for Greece, the monetary watchdogs warned. The consequences for Europe's banks and the Greek economy would be devastating.

The mere suggestion of what the Financial Times called the " central bank equivalent of nuclear deterrence" was enough to prompt German Finance Minister Wolfgang Schäuble to withdraw the German proposal immediately. A debt restructuring, Schäuble admitted sheepishly, could lead to a repeat of the events triggered by the bankruptcy of Lehman Brothers in September 2008.

In addition to revealing how serious the euro's problems are, the slugfest proves how much of its reputation the Frankfurt-based ECB has lost in the euro zone's strongest economy.

In the past, the central bank was seen as the undisputed economic authority in Germany. Anyone who opposed the monetary policy experts was quickly marginalized. Today, however, the central bank must threaten with the most drastic of measures just to force the German government to toe the line. A majority of German economic politicians and economists see the ECB's crisis strategy as unrealistic and contradictory.

One Year On, Situation in Greece Hasn't Improved

Experts concede that a restructuring of Greece's debt is undoubtedly risky. On the other hand, more of the same would mean the prolonged agony of propping up Greece with European loans for many years to come.

The facts speak for themselves. After a year of collective aid, the situation in Greece has not improved. On the contrary, almost all economic indicators have reached alarming levels. Meanwhile, the reform process has stalled and the country is making little progress.

This is the conclusion reached by the so-called troika, consisting of the ECB's economic and financial policy investigation and intervention team, the European Commission and the International Monetary Fund (IMF). In their quarterly report, which they expect to release at the end of this week, the experts maintain that Greece is failing to meet almost all agreed to fiscal goals.

The country's budget deficit is now higher than expected, because the Greek government is spending more than agreed under the aid program, and because tax revenues are significantly lower than targeted revenues.

'We Expect Athens To Do Its Homework'

The consequences of these undesirable developments could be fatal, experts at the three key organizations warn. The Greek government's creditworthiness in capital markets would decline even further, creating a new funding shortfall in the agreed aid program. Under the existing plan, Greece is scheduled to take on €25 billion ($36 billion) in new loans within the next year, which seems impossible at the moment. "We expect Athens to do its homework," EU Economic Monetary Affairs Commissioner Olli Rehn said in an interview published in this week's issue of SPIEGEL.

But if Greece is unable to come up with its own contribution next year, the IMF will not be permitted to disburse the next tranche of its bailout loans, payable in late June. Under IMF rules, the fund can only make loans available to a country if its financing is secure for 12 months. Little wonder, then, that Jean-Claude Juncker -- the Luxembourg prime minister and president of the Eurogroup, the regular meetings of the 17 finance ministers of the countries that use the common European currency -- hinted last week that the IMF could end up opting out of the Greek bailout.

The experts are now rushing to develop proposals on how Athens could return to the capital markets by 2012. The troika recommends a package of measures. For one, it wants the Greek government to ensure that taxes are indeed being collected. It always wants Athens to raise taxes even further.

In addition, the administration of Greek Prime Minister Georgios Papandreou is being asked to expedite its sale of government assets. Some €50 billion in proceeds from privatization are already planned for 2015, but the troika experts believe that this amount could be easily increased. Their inquiries have revealed that the Greek government owns real estate, businesses and other assets worth a total of about €300 billion.

The Greeks are also expected to rein in spending more effectively. The triumvirate of watchdogs wants to force the Greek government to shrink government spending until it falls within the agreed framework. The organizations hope that this will avert a government bankruptcy, which would have a devastating impact, says the ECB, particularly on Greek banks.

Many of these banks could go under if the maturity dates of Greek government bonds were extended and the ECB, as a result, were no longer willing to accept them as collateral for fresh loans. The Greek banking sector would be cut off from the money supply, the country's economy would be on the verge of collapse once and for all, and Greece would have to withdraw from the monetary union.

However, the central bankers' doomsday scenario isn't convincing, at least not among experts. "The ECB's position on Greek debt restructuring is untenable," says Hans-Werner Sinn, head of the Munich-based Ifo Institute for Economic Research. According to Sinn, it is entirely up to the central bank as to whether it agrees to accept the bonds as collateral for providing Greek banks with liquidity.

"The ECB makes its own rules," says Thomas Mayer, chief economist at Deutsche Bank. He also points out that it isn't true that Greek banks would lose access to central bank funds in the event of a debt restructuring. If, for example, old Greek bonds were exchanged for new securities issued by the European bailout fund, they would be "completely acceptable to the ECB," says Mayer. "Besides, Greek banks own large amounts of foreign assets, which the central bank could also accept as collateral."

Clemens Fueset, an Oxford economics professor and member of the independent economic advisory council to the German Finance Ministry, is also sharply critical of the ECB announcement. "It just isn't possible that the rehabilitation of Greece could fail because of such a technocratic argument," he says. "This is a scandal."

Fueset characterizes as "ridiculous" the European central bankers' fear that their reputation could suffer if they continue to supply Greece with funds. He even uses the words "rather insolent" to describe the behavior of ECB President Trichet and his colleagues in recent weeks.

Trichet and his colleagues also face criticism for having added large numbers of toxic securities to their own assets in recent years.

Economists agree that Greece will not emerge from its crisis without a debt restructuring. "To become competitive again, the country would have to reduce prices and wages by 20 to 30 percent," says Ifo President Sinn. This would correspond to the devaluation that occurred in Germany in the early 1930s as a result of the emergency decrees of then Chancellor Heinrich Brüning. "This sort of thing works in theory, but in practice it leads to the brink of civil war."

The development is extremely dangerous for the ECB. If it hopes to keep faltering Greece afloat with new government loans, it will need the consent of Germany, the biggest financial contributor to the community. But how does it expect to get it if no one in Germany has any faith in its strategy anymore?

As a result, a rethinking of the ECB's approach seems to be taking shape -- not in the bank's Frankfurt directorate, which is stubbornly adhering to the anti-restructuring doctrine, but at its most important branch, the Bundesbank, only a few kilometers farther north.

Last week Jens Weidmann, the new president of Germany's central bank, expressed his views on the subject in the Frankfurter Allgemeine Zeitung. And to ensure that no one would overlook it, Weidmann uttered a sentence at the beginning of the interview that Trichet would delete from any document: "The Bundesbank is not opposed to a debt restructuring per se."

Weidmann is a member of the ECB's governing council, a body which is set to meet next week. It's likely to be a lively session. 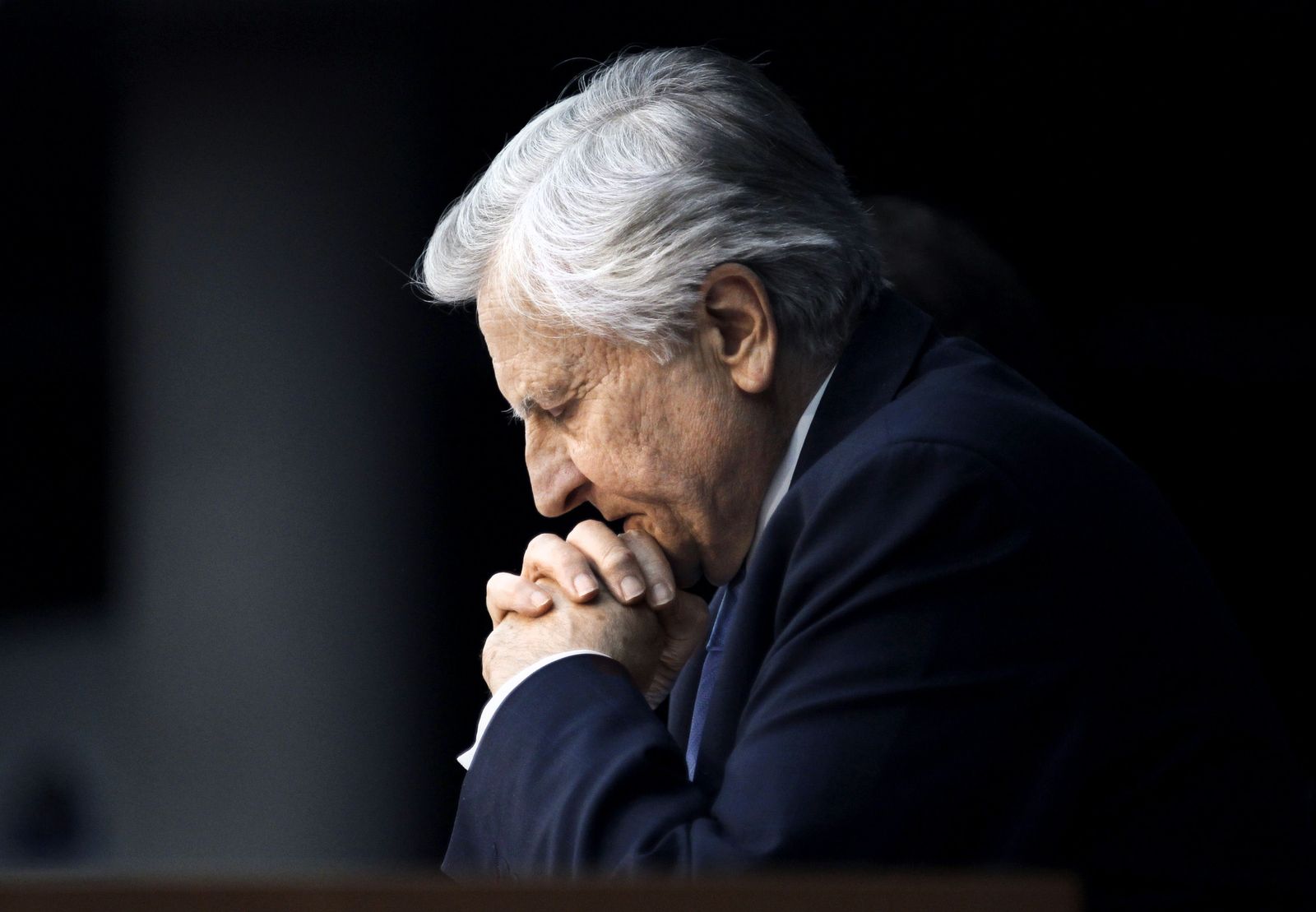