The crucial clue came from the same man whose signature once adorned the deutsche mark: Helmut Schlesinger, former president of Germany's central bank, the Bundesbank. He was the one who pointed Hans-Werner Sinn, an economist in Munich, in the direction of a strange entry in the Bundesbank's statistics: In late 2010, records showed claims on other euro-zone central banks totaling over €300 billion ($400 billion). Curious, Sinn began to dig deeper. What he found exceeded his worst expectations.

"In the beginning, all I had was this number, and I didn't really know what it meant," says Sinn, who is president of the Munich-based Ifo Institute for Economic Research. "The Bundesbank told me those were irrelevant balances. But that didn't reassure me."

Sinn spoke with specialists at various central banks and with colleagues in his field. "Each person knew a little bit," Sinn explains, "and I had to fit the pieces of the puzzle together. It was real detective work."

After weeks of work, Sinn had assembled enough pieces to create a picture that would make any one shudder: Since the 2007 financial crisis, immense imbalances have formed within the otherwise harmless payment system that exists between the central banks of the 17 euro-zone member states. While Italy, Spain, Ireland, Portugal and Greece, all hit hard by the debt crisis, show deficits totaling over €600 billion, the claims owed the Bundesbank have climbed to €498 billion.

'Caught in a Trap'

As long as the monetary union continues to exist, this isn't a catastrophe. The money is virtual, created by central banks, and its existence doesn't mean that an equivalent amount is lacking elsewhere. But as soon as a country leaves the euro zone, or the currency union collapses entirely, things get critical.

"We're caught in a trap," Sinn says. "If the euro breaks apart, we're left with an outstanding balance of nearly €500 billion, owed by a system that no longer exists." That figure, €500 billion, is more than one and a half times Germany's annual federal budget.

This, though, is the worst-case scenario, and would only apply if the euro zone falls apart entirely. A far more realistic possibility is that one country, such as Greece, would leave the monetary union. In this case, all of the other euro-zone central banks would have to bear the Greek central bank's debt together. Germany's Bundesbank, in accordance with its share of the European Central Bank (ECB), would assume about 28 percent. With Greek debt at €108 billion, Germany's share would be approximately €30 billion.

Sinn loves to be provocative. In this case, though, it seems he truly has serious concerns. Sitting at a restaurant in Berlin's government quarter with his laptop open on the table in front of him, he uses the tip of his coffee spoon to trace the yellow and blue lines that snake across the screen. These lines are meant to show the extent to which the euro zone has gone off track.

"This is dangerous," Sinn says, his eyes flashing. These outstanding balances owed by other central banks open Germany up to blackmail, he explains. "Now everyone knows we have to save the euro, at almost any cost."

His thesis sounds dramatic, yet so far Sinn hasn't managed to get the general public interested in the problem, which is only slowly spreading beyond economic circles. He has made it into the major newspapers, but the mass-circulation tabloid Bild won't be publishing Sinn's discovery on its front page any time soon.

Sinn certainly isn't shy about making himself heard. He's a welcome guest on talk shows because he makes his case clearly and sums it up in pithy sound bites. But that approach doesn't work with Sinn's current subject, which is too complex for a talk show. Then there's the name of the payment system between the central banks -- "TARGET2" -- which sounds about as exciting as the title of an accounting seminar.

The Genesis of the Problem

In theory, the system ought to be as harmless as it sounds. TARGET2 is meant to help process the payment claims between central banks that result with every cross-border bank transfer within the monetary union. As long as the economy is in balance and goods and money are flowing in all directions, the balances always even back out. Even if a country imports more goods than it exports, it is generally able to make up the difference through capital inflow from abroad, keeping TARGET2 balances at or near zero. This was the case until the beginning of 2007.

Here's an example: A Greek business buys a truck from a German company. The Greek company's local bank in Thessaloniki transfers the payment for the truck to the German company's bank in Stuttgart. Because the payment is carried out through the two countries' central banks, this creates a liability on the part of Greece's central bank toward the ECB within the Target2 system, while the German Bundesbank now has a claim from the ECB for the same amount.

The balance evens out when money flows from Germany to Greece, as happened most years before the crisis: The commercial bank in Greece would borrow the money it needed for its loan to the Greek business, for example, from a German bank.

That, in itself, is a problem. Since countries such as Greece, Spain and Portugal have for years imported more than they exported, even before the crisis they relied on capital inflow from abroad to pay for the goods and services they bought. Germany, on the other hand, has consistently produced export surpluses, which means it has to export capital as well.

Such imbalances cause difficulties in the long term, even in good times. But in a financial crisis, they can potentially lead to catastrophe because the cash flow between banks suddenly falters. This is what has happened since 2007:

Even worse, the central banks also grew increasingly lax in the collateral they required for loans they made to banks in their country. Whereas in the past they accepted only government bonds with top-level credit ratings, now they began to accept second and third-tier securities. This can be seen clearly in the statistics: Just between 2005 and 2010, the volume of securities accepted by central banks rose from €8 billion to €14 billion -- and has likely increased even more since then.

Especially those banks in crisis countries, which are already reliant on their central banks, now submit even their worst securities. Greek banks, for example, have primarily their own country's sovereign bonds on their books. No one on the free market wants these securities, but the Greek central bank continues to accept them as collateral, issuing new money to the banks in exchange. "Private cash flow is replaced by public cash flow," Sinn explains.

This becomes dangerous if those securities ever need to be used, for example if Greece leaves the monetary union or declares bankruptcy. At that point, Greek bonds would be valueless, and the probability that Greece's central bank will be able to repay its debts to the euro system becomes miniscule.

'If Only One Person Says It, It Can't Be True'

At first, Sinn took a great deal of criticism for his beliefs. There was something of an outcry among economists the first time he published details of his thoughts in the Frankfurter Allgemeine Zeitung, partly because not all of those thoughts were as clearly formulated as they are in his most recent paper on the subject. He was exaggerating and artificially playing up the risks, other economists said. The Bundesbank itself also initially dismissed the divergent balances as more or less harmless. Sinn was essentially alone in his views.

"Everyone thought: If only one person says it, it can't be true," Sinn says. Still, the economist says, he never doubted his own interpretation of the facts. And by this point most of the critical voices have fallen silent.

"I spent two weeks looking into the subject," says one German economics professor. "Mr. Sinn is right. The analysis is brilliant." Others concede, though some through gritted teeth, that the risks of the TARGET2 balances do seem to be higher than they originally thought.

The ECB, meanwhile, has confirmed the principles behind Sinn's analysis, but draws considerably more innocuous conclusions, at least publicly. The fact that central bank funds within the euro system are distributed so unevenly, according to the ECB, actually helps promote stability, since financially solid banks even "in countries with financial strains" are able to satisfy their liquidity needs.

That statement only seems reassuring on first glance. In plain language, what it means is that commercial banks in crisis-stricken European countries are forced to rely on funds from their central banks because they can no longer get money anywhere else.

Eurobonds Would Help Solve the Problem

It is difficult to come up with ways to reduce risk without plunging the euro zone into chaos -- which is precisely what would happen if central banks in crisis countries were forced to pay back their debts overnight. Sinn suggests tightening regulations on the collateral banks use to borrow money from central banks. In the medium term, he says, central banks could be forced to regularly settle their liabilities with valuable securities, which is common practice in the Federal Reserve System in the US.

Another option for reducing risk in central banks would be to shift aid from monetary policy to fiscal policy, for example through the introduction of eurobonds. That, though, is a route Sinn would rather not consider. Instead, he advocates tougher methods.

"The rules need to be stricter," he says. "Anybody who can't comply with them doesn't belong in the euro zone." Sinn, as ever, the provacateur. 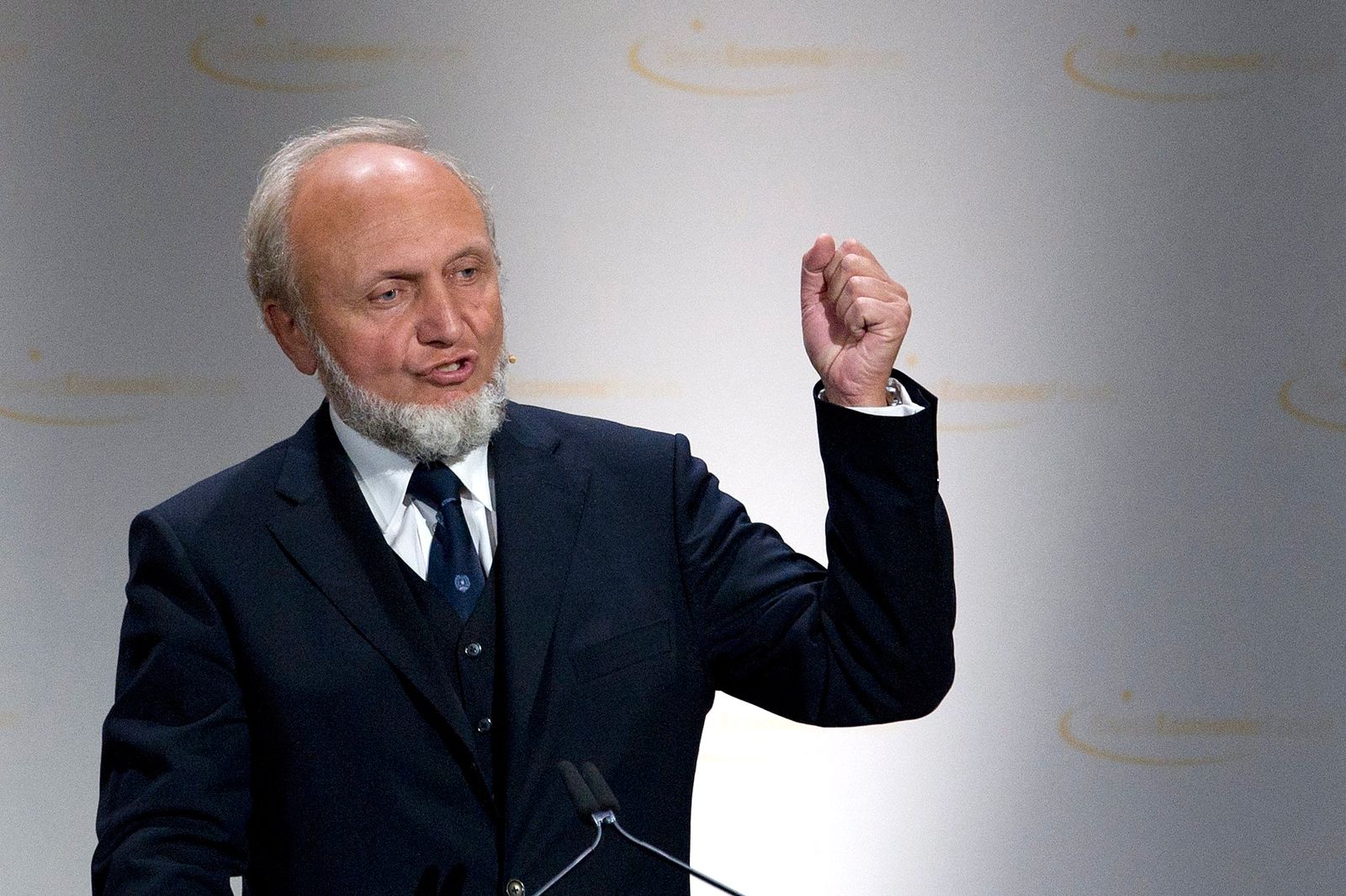 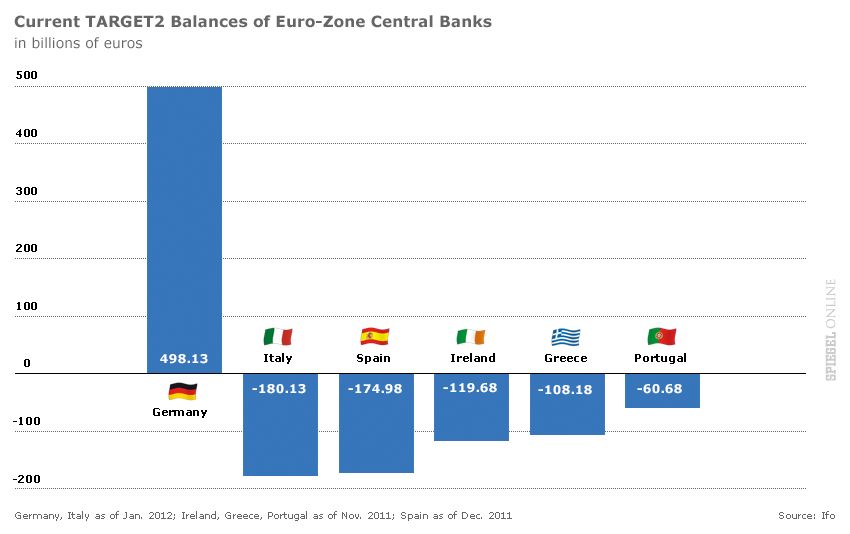 The Bundesbank's claims are set off by massive debts in crisis-stricken euro-zone countries. 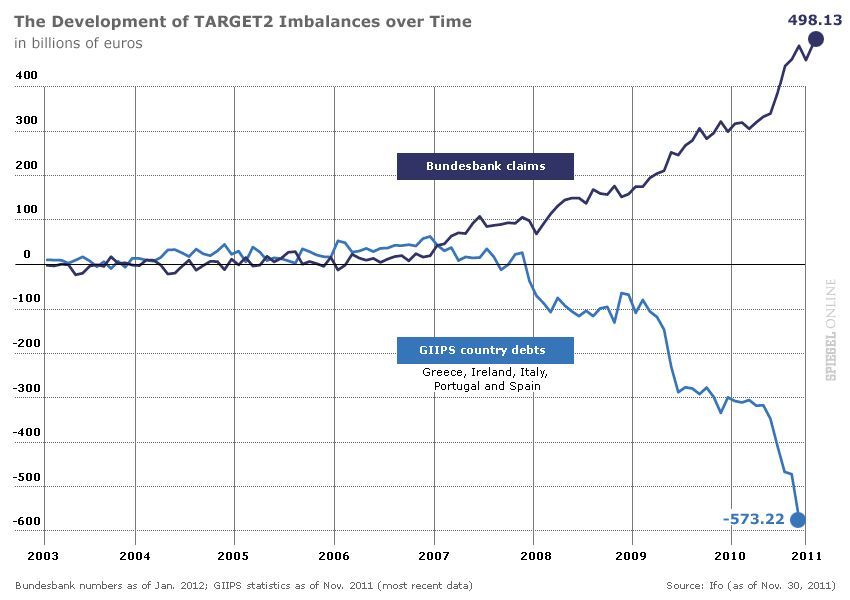 Bundesbank claims are rising -- as are the debts of crisis-stricken euro-zone countries.