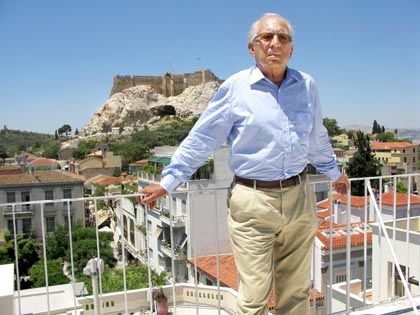 The way to the world of Dimitris Lambrou, editor-in-chief of the Greek monthly magazine O Davlos ("The Torch"), leads through the tourist district of Athens, up the stairs to the third floor of an apartment building, and through a massive wooden door. Lambrou sits at his desk in a small office with the curtains drawn, afraid of being misunderstood.

"I'm a fan of old values and traditions," he says, pointing to the fan rotating behind his desk. Lambrou, a white-haired man in glasses, shirt open at the neck, sits on a desk chair that has seen better days. An employee sits in front of the fan, a former army general, heavy and soft-looking, whose job is to record what Lambrou says. One cannot be too careful, says the ex-general's boss.

Lambrou, 69 and married, is on a mission. His core thesis, in abbreviated form, goes like this: The Christianization of Europe was not the beginning, but the end of Europe's greatness. For Lambrou, ancient Greece represented the height of European civilization.

It's a complicated mission. A full 98 percent of Greeks are Greek Orthodox, and Lambrou's mission seems more or less irrelevant to them. O Davlos has a circulation of about 5,000 copies, and other publications rarely acknowledge Lambrou at all.

All that changed on April 10, when Lambrou filed a petition for a temporary injunction in an Athens court. He wanted to keep OLKE, Greece's gay and lesbian association, from continuing to use the word "lesbian." Lambrou himself was born on the island of Lesbos, the home of the poet Sappho, classical muse of all women who love women. Lambrou happens to love his native Lesbos. OLKE, he insists, has stolen the word "lesbian." Women from Lesbos are constantly confused with lesbian women, says Lambrou, who believes real Lesbians can only exist on Lesbos.

Lambrou and his actions were met with resounding applause, in Greece and around the world. Residents of Lesbos contacted him, offering their services as expert witnesses. He even received a call from Canada, from a man originally from Lesbos, who emigrated more than 30 years ago and insisted that he still suffers from the confusion.

Suddenly everything seemed possible. What if an island in the Aegean Sea manages to triumph over the entire world? What if lesbian is just a geographic designation, perhaps even a "brand," something that can be registered and protected?

Laughter in the Gallery

The matter was brought before an Athens court in early June. The gallery filled with residents of the island of Lesbos, along with homosexual men and women.

"My wife is a Lesbian, my daughter is a Lesbian and I am a Lesbian," Lambrou's witness began, to laughter from the gallery.

"Do you hear those people laughing?" the witness asked the female judge. "All of Greece is laughing about it. And now you can imagine how we are treated abroad."

The witness told the judge that he has a daughter. When she discovered what the L in OLKE stands for, she was ashamed.

Lambrou sat in the gallery, surrounded by Greek gays and lesbians. He seemed convinced that the case was progressing in his favor. But then the opposing party's attorney cross-examined the witness. What about twins whose bodies are joined at birth? he asked. Wouldn't he, the witness, refer to them as Siamese twins?

"Don't you think the Siamese might object to that?"

He hadn't come to Athens to discuss the problems of the Siamese, the witness said curtly. How old, the attorney asked, was the witness's daughter when she blushed at the notion that the letter L in OLKE stands for lesbian?

"Twenty-six," the witness replied, to renewed guffaws in the gallery. At this point Lambrou could very well have felt -- for the first time -- that his campaign was not progressing as he'd hoped.

Sitting in his office, Lambrou says he's not anti-homosexual. Women should come to Lesbos, all women; they should spend their vacations here. He has no objection to women marrying one another. But the words, he says, and the historical facts, need to be corrected. He says it's ridiculous to claim that Sappho loved women, for instance. Everyone -- according to Lambrou -- knows that the poet, the married mother of a daughter, committed suicide out of love for a man.

And what should lesbians call themselves if they can no longer call themselves lesbians? Lambrou is ready for this question. He suggests the word "Tribades." The verb "trivo" means "to rub" in Greek. He glances proudly at the retired army general, who by now is slumped in his chair. "Those who rub themselves," he says with satisfaction, "how would that be?"

Lambrou wants respect for real Lesbians, even if it means being laughed at by half the world.