From today's perspective, Sept. 5, 2015, feels like an eternity ago. That was the day when the chancellor made the decision to allow refugees who had been detained in Hungary to come to Germany. It was the day when she decided to adopt a humanitarian refugee policy -- and the beginning of the erosion of Angela Merkel's power.

"The world views Germany as a country of hope and opportunity," she had said only a few days previously, as part of her annual summer press conference. She also evoked the universal civil liberties that are part of the founding principles of the European Union. It was the day when Angela Merkel decided to follow her convictions, to replace pragmatism with idealism and to emphasize the "Christian" in the name of her party, the Christian Democratic Union. It was the first time in a long while that she didn't think things through all the way to the end.

Sept. 5 seems like an eternity ago and yet we are still confronted with the same images today as we were back then. In recent days, thousands of refugees have once again been stranded along the Balkan route, and this time they are being held back by border fences. Desperate men, women and children can be seen camping out in central Athens. And this time there are images that Merkel had hoped to avoid last September: images of a Europe that is placing its bet on partition and deterrence. They are images of defeat for the German chancellor. Merkel's humanitarian approach in the refugee crisis has failed.

Border controls have been reintroduced across large parts of Europe and fences are being erected. It turns out that Merkel deceived herself about the extent of European solidarity. There will be no harmonious distribution of refugees and it is unlikely that Turkey will reliably protect Europe from a further influx of refugees. That's a sad state of affairs. Indeed, nothing is as unseemly as the gloating comments over Merkel's failure one hears these days in Bavaria and Budapest. In Munich, Bavarian Governor Horst Seehofer has alleged that the chancellor's Willkommenskultur for refugees has radicalized the country, and, in Budapest, Hungarian Prime Minister Viktor Orbán this week accused Merkel of "importing terrorism, crime, anti-Semitism and homophobia" in an interview with the German mass-circulation daily Bild.

But there hasn't been much progress with the plan to combat the root causes of flight, either. There are no prospects for peace in sight in Syria, Libya remains a failed state and Iraq is, despite some territorial gains against Islamic State, still far from establishing peace.

When a politician experiences a policy failure, their power is jeopardized. They must decide whether to jettison those policies or relinquish power. Merkel appeared ready to put her power at stake with her open arms approach to the refugee policy in much the same way her predecessor Gerhard Schröder did with his Agenda 2010 structural reforms and Helmut Schmidt did with his NATO Double-Track Decision, which allowed the deployment of American nuclear weapons in Western Europe.

But that no longer appears to be the case. The chancellor will relent; in fact, she has already begun. Her policy shift is by no means radical -- it is taking place in many smaller steps, making it more difficult to discern. But in the end, little will be left of the friendly face with which Merkel wanted to welcome migrants when they arrived.

Conditions for refugees are already rapidly deteriorating. Social benefits are being reduced, limits are being placed on family reunification in a way that will lead even more women and children to make the dangerous journey by boat to Europe. The number of countries designated as safe will be increased, allowing for the easier rejection and deportation of asylum applicants. And there will be a forced repatriation of Afghan nationals -- to the very country that Western troops were unable to pacify and is now sinking into civil war.

Currently, significantly fewer refugees are arriving in Germany. This, however, is not the product of Merkel's policies -- it is the result of her failure. Fewer people are coming because Merkel's opponents have closed the borders along the Balkan Route. Even back in the autumn when Hungary erected a border fence, the protest from Berlin was at best cautious. And when Turkey began erecting a wall along the Syrian border, officials expressed understanding behind the scenes.

Now that that Balkan Route is being sealed off, Berlin is declaring it to be the second-best solution. In a government declaration delivered in mid-February, Merkel soberly asked if it was worth while continuing "with our European-Turkish approach" or whether it might be better to just close the Greek-Macedonian border? What we are witnessing today no longer has anything to do with conviction -- it is the return of the ultra-pragmatic Chancellor Merkel, who is paving an escape route from her previous policies.

European refugee policy has always been a mix of asylum and deterrent, principals and pragmatism, altruism and letting people drown. It's not a pretty mix. It never made Europe look very good and, as such, also stood no chance of transforming Angela Merkel into a saint. Still, she could have made an effort to put Europe into the loop before making such a solitary decision.

Now a new division of labor is taking shape: Germany is responsible for humanism and the others for severity. It couldn't be any more cynical: It allows Merkel to come across as ethical while Viktor Orbán is stuck with the dirty work. 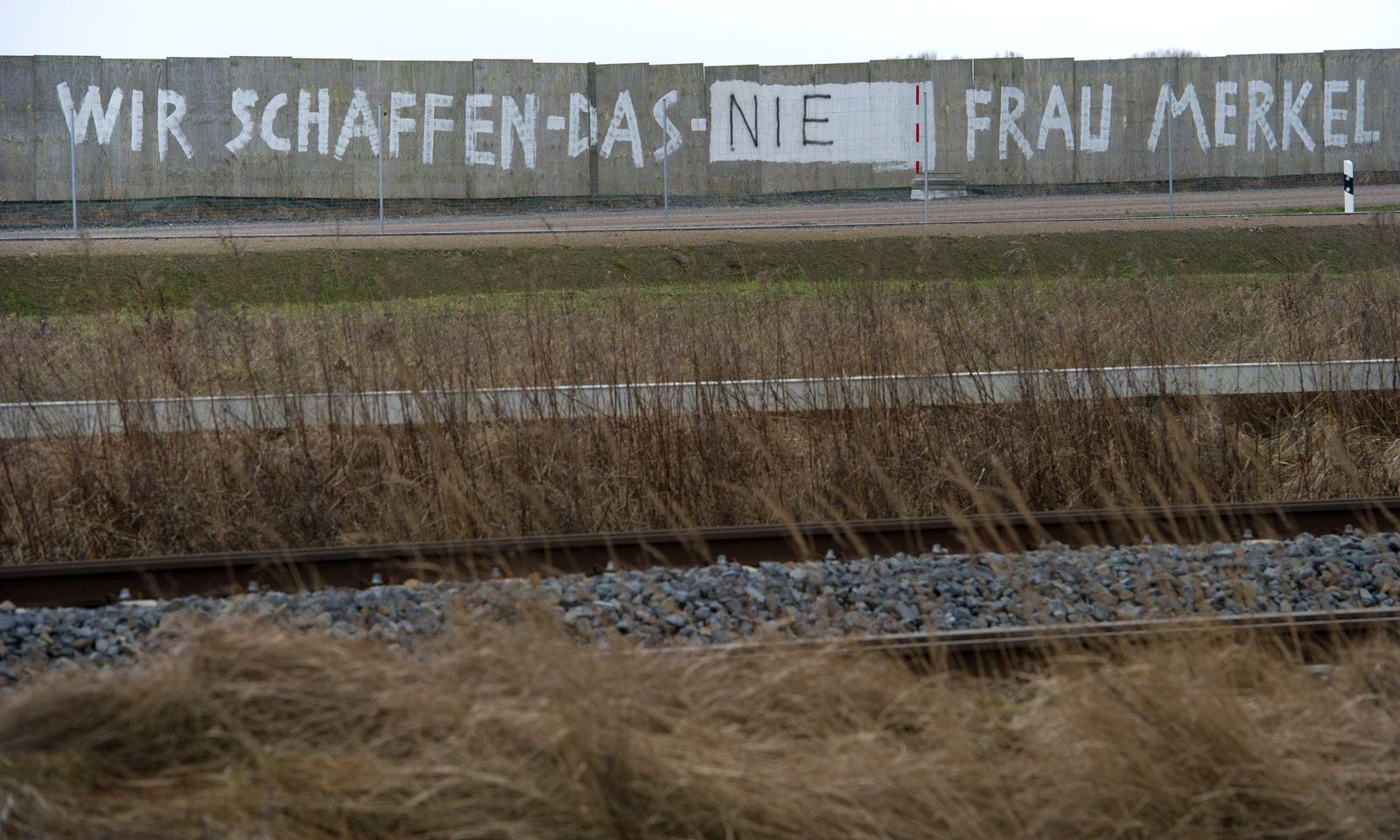 "We'll Never Manage It, Ms. Merkel," reads graffiti painted along a wall on a road on Rügen Island in northeastern Germany.