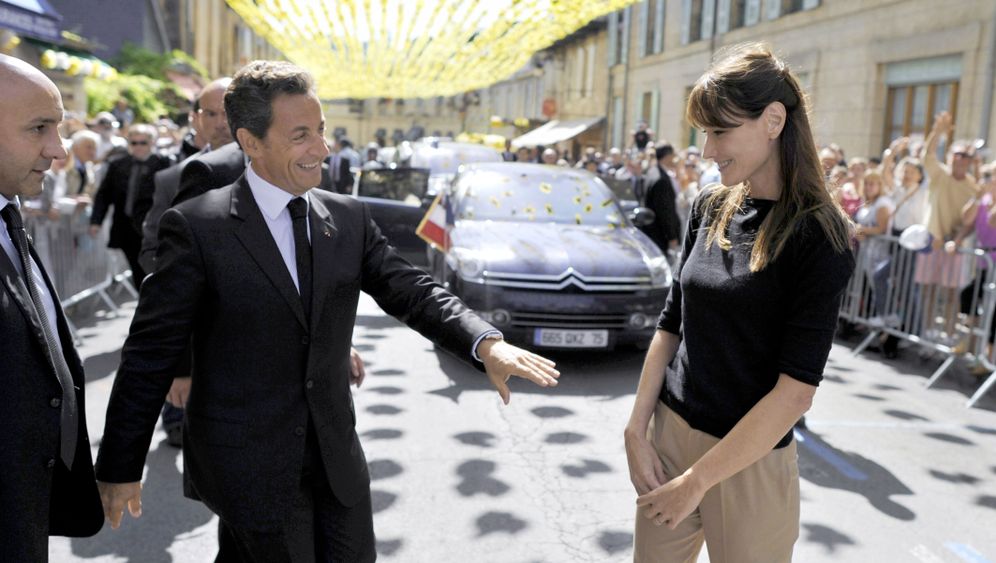 In recent weeks, French President Nicolas Sarkozy has been on a whirlwind trip around his country. Wherever he has gone, he has been doing what he does best: making promises.

He promised mountain farmers in the southern region of Provence support for their sheep-rearing practices. He promised to give the residents of high-rise apartment blocks in Paris' poverty-stricken suburbs subsidies to buy their own homes. And he promised the families of soldiers killed in Afghanistan that he would continue the war on terror. It was a well-worn tactic: Sarkozy, the hyperactive, omnipresent herald of good tidings, valiantly tackling one crisis after the other.

In between his other engagements, Sarkozy and his wife Carla Bruni took time to see the prehistoric caves of Lascaux and admire the more than 17,000-year-old murals. Afterwards, clearly moved, he announced: "It is truly important for the president to be present at this location at this time." He did not explain why.

Then, on Thursday, Sarkozy traveled to a special European Union summit in Brussels. On Tuesday of last week, European Justice Commissioner Viviane Reding had described Sarkozy's recently-initiated expulsion of Roma people as "shameful" and indirectly compared it to similar Nazi-era deportations. She threatened to take legal action against France over the issue.

The French president objected vehemently, and got into an argument with European Commission President Jose Manuel Barroso during lunch. Then he dropped an apparent bombshell: German Chancellor Angela Merkel also intended to clear Roma camps in her country, he said. A little flustered, Sarkozy scanned the faces of his colleagues around the room.

Berlin denied having any such plans. The commissioners were nonplussed: Was a German chancellor really considering clearing Roma camps? With a French president announcing it so triumphantly? The notion was completely absurd.

These kinds of histrionics have up to now been the sole preserve of Italian Prime Minister Silvio Berlusconi, who for years has been conducting politics as a kind of reality TV show. Berlusconi adores being provocative, revels in bizarre announcements, and even makes risqué comments at international summits, with his lifted face covered in makeup. Does Europe now have a second diva in Paris?

Yes, say Parisian newspapers, which have already dubbed him "Sarkosconi." Yes, says political scientist Olivier Duhamel, one of the signatories of the "We are all French" petition, an initiative that rejects Sarkozy's plans to strip foreign-born French nationals of their citizenship if they fall foul of the law. Duhamel believes Sarkozy is as hopelessly narcissistic as Berlusconi, similarly obsessed by the idea of controlling the media, and driven by the desire to keep tabs on everything and everyone.

Just like the Italian premier, Sarkozy has long been appointing friends to key positions in both the political establishment and the media. Now he is engaging in xenophobic populism. All that is missing, Duhamel says, is "an open alliance with the far-right." It was no surprise, then, that Berlusconi was the only European leader who backed Sarkozy last week.

Nicolas Sarkozy's expulsion of the Roma is born of frustration that his popularity is at an all-time low. Just three years after he moved into the Elysee Palace, the French president's official residence, two-thirds of all Frenchmen are determined he shouldn't have a second five-year term in office. Fifty-five percent want the center-left Socialist Party in power again. Another survey found that if Dominique Strauss-Kahn -- a French Socialist who currently heads the International Monetary Fund in Washington -- were to stand in the next presidential election and it were held today, he would be able to beat Sarkozy in the second round of voting, with 59 percent of the vote to Sarkozy's 41.

The French president currently presides over a country that is turning its back on him. It does not believe him anymore. Bus stops in Paris are being bill-posted with a variation of a recent cover of The Economist magazine, showing a spaniel-size Sarkozy under a Napoleon-style hat.

A Restless Upstart Right from the Beginning

Never before have the citizens of France's presidential democracy poured such vitriol over their elected monarch. "Is this man dangerous?" asked the Nouvel Observateur, whose cover featured a black-and-white image of what appeared to be a mug-shot of the unshaven president. The picture recalled the stubbly face of Richard Nixon in the 1960 TV debate with Kennedy that helped to wreck his presidential aspirations. Opponents gleefully post videos of Sarkozy's signature shoulder shrug and Sarkozy's other quirks online, while magazines publish psychiatrists' dissections of his narcissism.

Former Socialist President François Mitterrand had an illegitimate daughter and a questionable Vichy-era past. But he read authors like Chateaubriand, Stendhal and Tolstoy, and conducted himself like a statesman, so the French respected him.

Mitterrand's successor, Jacques Chirac, only escaped investigation for corruption because the office of president granted him immunity from prosecution. It is believed that Chirac illegally diverted hundreds of thousands of francs to his political party's war chest while he was mayor of Paris. And yet the French liked him because he spoke to them, shook their hands and appeared down-to-earth.

By contrast Sarkozy, the sixth president of the Fifth Republic, appeared from the very outset like a restless upstart lacking the necessary qualities to be a statesman. Once ensconced in power, he acted with the nouveau-riche abandon of a poor man who suddenly wins the lottery, a series of trophy wives at his side; first the beautiful Cécilia, then the rich and wild Carla Bruni, a singer and former model. He celebrated his electoral success together with business acquaintances and actors in the luxury Parisian restaurant Fouquet's, before taking a vacation on a yacht lent to him by one of the wealthiest men in France.

Sarkozy had promised the voters a "rupture," a break with the past. No longer would they have "grandpa and grandma in the Elysée Palace," as he put it -- a "president of the modern Republic" was moving in. He wanted to head a France "that gets up early." He announced reforms and a radical overhaul of the old system. At first the French saw him as a breath of fresh air. They hoped for greater purchasing power and a reorientation of France's traditionally anti-American approach to foreign policy.

But their newly-elected president's first political move merely benefited his rich friends, whose maximum taxable burden he capped at 50 percent of their income. Doubts began to arise about the president's true allegiances. Last year alone, the change meant the state effectively gave the country's top earners a total of €679 million ($886 million), or just over €36,000 each.

"At the time I was asked what I considered to be the greatest danger of a Sarkozy presidency," says Edwy Plenel, the head of the Mediapart online news service. "I have always said that he himself is the greatest danger because, with Sarkozy, a man who knows no limits met a system whose political institutions are completely tailored to the president."

Plenel, 58, is one of the best-known journalists in France. He sits open-shirted in the large, airy office he calls his "open space" in a side street of the Bastille quarter of Paris. The former editor-in-chief of the daily newspaper Le Monde unveiled the scandal of the sinking of the Greenpeace ship Rainbow Warrior by agents of the French intelligence service in 1985. His phone was tapped under Mitterrand.

Now he is certain he is under observation again, and the authorities are monitoring when and with whom he is making phone calls. Just like his colleagues at Le Monde, whom the intelligence service has apparently targeted on behalf of the Elysee Palace in an effort to find the newspaper's sources in a case which links the president to allegations of illegal campaign financing and possible tax evasion by France's richest woman, Liliane Bettencourt, the heiress to the L'Oréal cosmetics empire. It was Plenel's news service that first began investigating the affair involving Labor Minister Eric Woerth, who allegedly received huge -- and illegal -- cash donations for Sarkozy's presidential campaign from Bettencourt. "It isn't a Woerth affair, but a Sarkozy affair," Plenel says.

Perhaps it was these revelations that prompted the president to launch his attack on the Roma. Maybe when he saw that he couldn't put out one fire, Sarkozy lit another to divert attention. On July 23, a court ruled that Mediapart had acquired its information legally and could therefore make full use of it. On July 28, France's prefects were given their first orders to close down at least one Roma settlement a week. Two days later, Sarkozy unveiled his new security offensive and declared "national war" on the Roma.

In the meantime, it has been revealed that the French intelligence service had also been commissioned to keep an eye on certain people close to the presidential couple. The aim of this monitoring was to find out who was spreading rumors that both had committed infidelities.

There are claims that Carla Bruni-Sarkozy was given personal access to the police and intelligence-service reports. After all, she is the wife of the man without limits.