How the times have changed. Not too many years ago, Germany was the "sick man of Europe." With 5 million unemployed, its labor market and economy were considered to be ossified. Given the sheer number of stalled reforms, many had given up hope of improvement. Regardless which international comparison was used to determine the best places in the world to do business, Germany always looked bad. Its workers took too much vacation, their salaries were too high, they retired too early, there was too little incentive for the jobless to seek gainful employment and there was no Sunday shopping to spur consumerism.

Today, Germany has the world's fourth largest economy -- and business is booming. At the same time, other members of the euro zone face bankruptcy. When transfers take place within the currency zone, Germany must shoulder the greatest burdens in providing money to beleaguered member states. And because that may continue to be the case for a few more years, many Germans feel their money is seeping away to southern Europe. In response, German Chancellor Angela Merkel is pointing her finger at the recipients of this aid, admonishing them to administer urgent reforms. 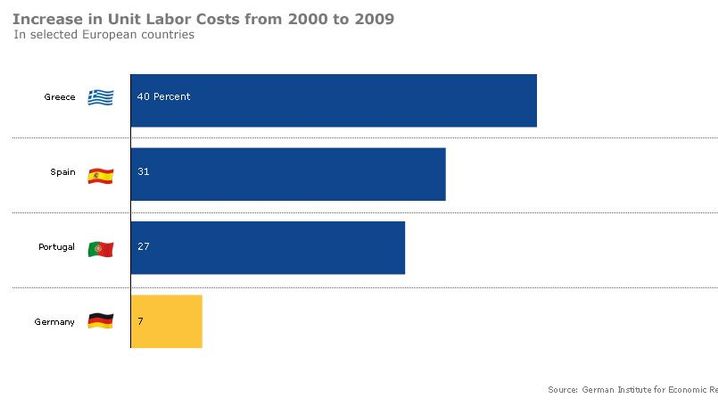 Addressing the question of what the reeling crisis nations must do in return for the billions of euros in aid from Germany they need to survive, Merkel said this week: "It is also important that people in countries like Greece, Spain and Portugal are not able to retire earlier than in Germany -- that everyone exerts themselves more or less equally. That is important." Merkel also indirectly criticized southern Europeans for enjoying more vacation than others. "We can't have a common currency where some get lots of vacation time and others very little. That won't work in the long term."

In less statesman-like vocabulary, what she really meant is this: "We aren't going to give our hard-earned German money to lazy southern Europeans." The chancellor made it sound as if Germans are financing some sort of easy prosperity for these countries. While there may not be anything new in the substance of that message coming from Berlin, the tone certainly is. They are the kind of statements that appeal to voters concerned these countries might be getting a free ride at their expense. But is Merkel correct?

The answer is yes and no. It is indisputable that bankrupt countries like Greece and Portugal as well as Spain, where the danger persists that markets could lose confidence in the country, are dealing with massive economic problems. For too long now, these countries have lived beyond their means. And they accepted a loss of competetiveness for their economies as a result.

A statistic from the Cologne Institute for Economic Research (IW) shows that consumer spending and investments in the three countries in the past decade were higher than gross domestic product. If a country consumes and invests more than its actual economic output, then it will rack up foreign debt. In the medium term, that is not an advantageous position to be in -- especially if, as has happened, a considerable portion of the foreign credit is consumed and not invested. It's called living on credit.

The trade balances of Greece, Portugal and Spain show the degree to which the three countries have lost competitiveness. These statistics compare the export of goods and services with imports. A negative trade balance means that an economy is importing more than it exports. It purchases goods from abroad but isn't selling its own products to other countries. A negative trade balance is also an indication of whether a country's products are less attractive on the global market than those of other countries.

Of the three countries, Greece is faring the worst in that regard. For decades, the country has had nothing but significant negative trade balances. In recent years, the situation has worsened further. But Spain and Portugal aren't doing that much better. Before joining the euro zone, the two countries occasionally registered surpluses in their trade balances, but that era passed in 1999. Since then, the trade deficits have grown every year.

The loss of competitiveness can best be seen when analyzing the increase in unit labor costs (see photo gallery). This index measures how labor costs for each worker have developed in relation to the service provided. If labor unit costs rise, it means that the wages are increasing at a faster pace than productivity. The price-performance ratio wanes, and fewer buyers can be found for products.

Greece is also faring the worst when it comes to developments in unit labor costs. In 2009, they were around 40 percent higher than in 2000. In Spain, those costs were up by a mighty 31 percent, with Portugal trailing slightly at 27 percent. By comparison, unit labor costs in Germany have only risen by 7 percent during the same time period.

The Greek budget situation was exacerbated by the fact that the state isn't collecting enough in taxes from its citizens. With a share of 19.4 percent of GDP, Greece has one of the lowest tax ratios in the European Union. Germany isn't much higher at 22.6 percent, but the country is considered to be better at collection than Greece, where tax evasion is considered to be especially pervasive.

Yet despite Merkel's statements suggesting the contrary, along with indisputable shortcomings among these southern European countries, the reality is that they have already begun the battle their inefficiency. Still, it is difficult to make direct comparisons because the pension systems in each of these countries vary considerably.

Greece, for example, has had no general minimum retirement age. On average, workers there retire at the age of 61.9 according to the Organization of Economic Cooperation and Development (OECD). That's slightly older than the average age of 61.8 in Germany and Spain (see photo gallery). Now there are plans to set the official Greek retirement age at 65. In addition, Greek citizens would have to pay into the pensions system for 40 years instead of the current 35 before they could draw the benefit. The reform was passed last year by the Greek parliament and will be implemented in 2013.

Spain is taking a little more time to introduce its shifts, but it is also planning dramatic steps. Despite bitter opposition, Socialist Prime Minister Jose Luis Rodriguez Zapatero and the country's unions agreed at the end of January to increase the retirement age, in steps, from 65 to 67. In the future, employees would also have to work for 37 years instead of the current 35 before they could collect a pension. The reform isn't expected to be fully implemented until 2027 and it still awaits parliamentary approval.

Currently Portugal has no plans to increase its retirement age from the age of 65. As part of the bailout package it is receiving from the EU and the International Monetary Fund, however, the government in Lisbon has been forced to freeze pension payments at the mid-level and to reduce monthly pension payments to retirees that exceed €1,500 ($2,140). The current actual average age of men entering into retirement in Portugal is 67 -- much older than the European average (see photo gallery). Portugal also pays out considerably less in retirement benefits than other EU states. In the course of his life, the average man in Portugal receives total pension payments of €140,000, according to the OECD. Average payments in Greece, Spain and in Germany are more than twice as high.

The southern Europeans have also dared to make serious cuts in the public service sector. Greece, which until recently had no overview of the actual number of civil servants working in the country, has applied a hiring freeze for an indefinite period of time. The country has also eliminated annual bonuses common for public employees that are equivalent to an additional one or two months of pay.

Spain and Portugal are also making cuts in pay for civil servants. In 2010, Spain reduced salaries for government employees by 5 percent, with no wage increases planned for this year. The country is also planning to eliminate 13,000 public sector jobs.

As part of its bailout deal, Portugal also obliged itself to freeze all public sector salaries until 2013. In addition, national authorities are required to reduce 1 percent of their employees each year, regional authorities are expected to trim staff by 2 percent for normal workers and 15 percent at the leadership level. In total, an estimated 8,000 jobs are expected to disappear each year.

The crisis countries have also been forced to take assertive steps in terms of taxation and have shown themselves to be anything but lazy in this regard. Portugal initially increased its value added tax (VAT) on sales and services from 20 to 21 percent and then to a hefty 23 percent. The country also increased income tax by 1.5 percent and has also since applied a 2.5 percent "crisis tax" on all business earnings. Spain has increased its VAT from 16 to 18 percent, and Prime Minister Zapatero has also announced he will introduce a "wealth tax." Top earners in the country who make over €175,000 a year will see their base tax rate increase by 2 percent to 45 percent.

Since the outbreak of the global financial and economic crisis, Greece has moved several times to increase various taxes. The country increased its VAT first from 19 percent to 21 and later to 23 percent. Fuel and tobacco taxes have also been increased significantly. A 10 percent "luxury tax" has also been implemented for expensive cars and yachts. Greek tax inspectors have also become more vigilant in locating luxury objects that may have been hidden. The government has ramped up investigations in a bid to stamp out the country's rampant black market.

Greece, Portugal and Spain all have their work cut out for them. But Angela Merkel's demand that they should make "a little bit" of an effort is misleading. Serious efforts began long ago.

Besides, Merkel's notion that people in southern Europe are more interested in vacation than work is a myth, at least if you go by figures from the EU's European Foundation for the Improvement of Living and Working Conditions (Eurofound). The agency's figures state that the Spanish and Portuguese are given an annual average of 22 vacation days, with Greeks receiving one more day. Germans, however, with their average of 30 vacation days, are European leaders in that regard. If you also factor in legal holidays, then they clearly have more vacation days than other European countries. 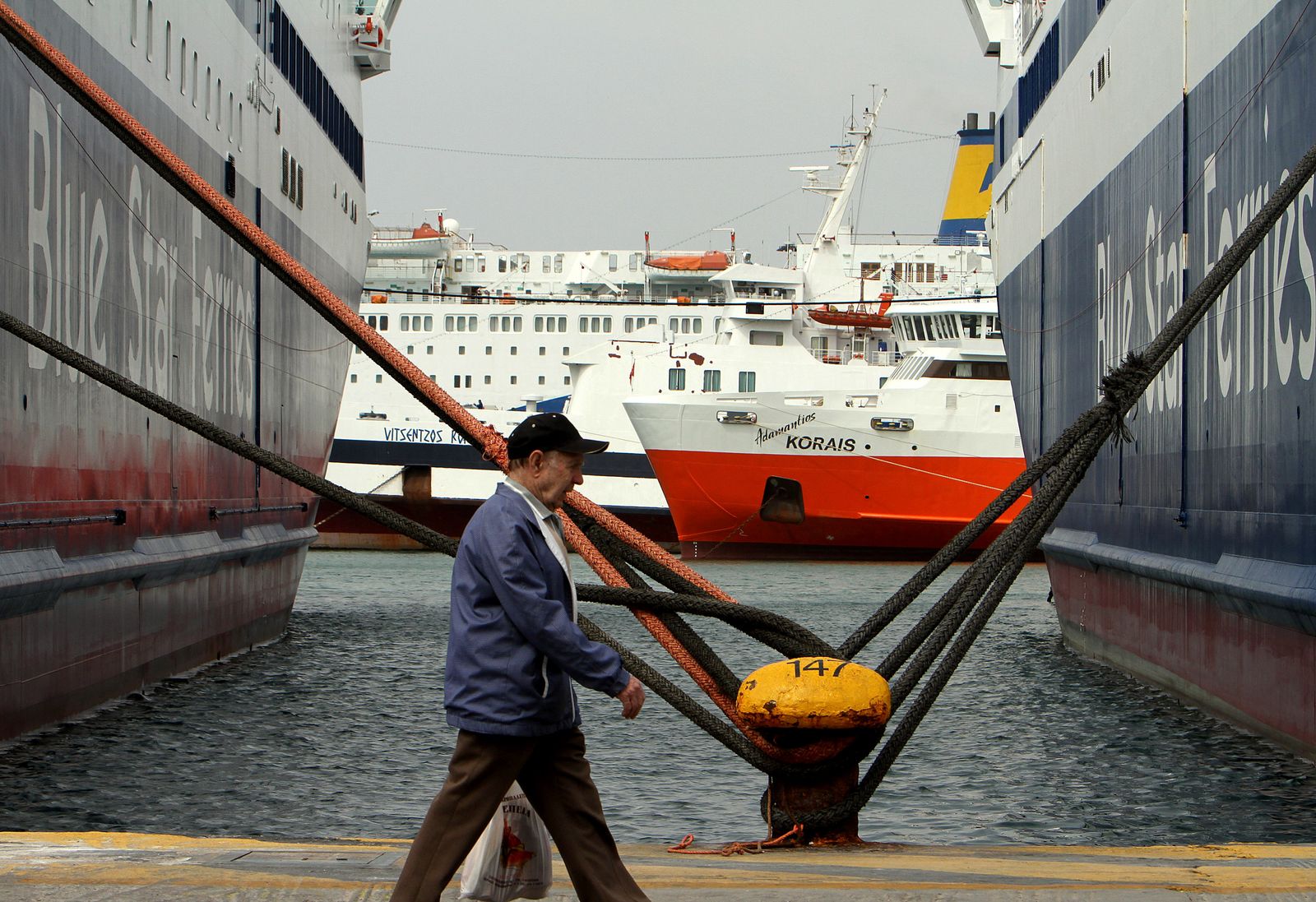 A pensioner in Greece: On average, Greek men don't go into retirement any earlier than their German counterparts.