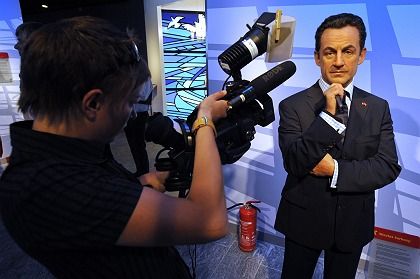 Nicolas Sarkozy had something different in mind for his televised appearance on Monday last week. The French president intended to explain to journalists at France 3, the country's public network of regional broadcasters, how he would use his EU Council presidency to keep Europe from imploding and how he had smoothed things over with protesting French fishermen.

But it wasn't the one-hour interview that made a lasting impression on France. It was an episode that played out just before the interview, when cameras were rolling and Sarkozy said hello to a technician installing his microphone. The man did not return the greeting. The affronted president mumbled, "When you're a guest, the least you can expect is for people to say hello."

"Unbelievable," he added. "And appalling." And then, twice: "That's going to change."

This brief sequence leaked to an Internet magazine called Rue89. Within 24 hours, over a million people in France had seen it. The minute-long clip says a great deal about Sarkozy's style and his relationship to the media. If you're on his side, he'll come through -- by feeding a catchy quote, a little inside information or a photo of him with his new wife, pop singer and model Carla Bruni. A veteran reporter at the presidential Elysée Palace says Sarkozy is "an excellent source." But if you're not on his side, you're in for trouble. Like France 3.

Even the reception Sarkozy received when he arrived at the station was less than presidential. More than 400 employees demonstrated against his scheme to ban advertising on public television. What Sarkozy is trying to sell as a plan to free public-service television from the "tyranny of viewer ratings" is seen by the protestors as the erosion of an institution. No funds have been secured to replace the lost revenues and the advertising would migrate to private channels such as TF1, which is owned by real estate magnate Martin Bouyges -- the godfather of Sarkozy's son Louis.

For nearly 30 years, French television has served as an experimental playground for presidents. François Mitterrand created the channels La Cinq, TV 6 and Canal Plus. Jacques Chirac privatized TF1. Now Sarkozy wants to completely overhaul France Télévisions, the country's public broadcasting network. He intends to reform this media organization with its 11,000 employees "from the ground floor to the roof."

By his own admission, Sarkozy is a child of the modern era of television. His favorite programs include sports coverage of the Tour de France and "Star Academy" -- and he seems to have his own notion of what variety in media is all about. In the future, he wants to appoint the director of France Télévisions himself. He views state television as a business, and says that it is "the majority shareholder who also selects the company CEO."

In effect, he seems to want to integrate public television more closely into the communications strategy of the Elysée. Sarkozy, le téléprésident, calls this giving an "educational spin" to his policies.

"This turns back the clock 40 years," says Jean-François Tébaldi, a union representative at France 3. "We're back to the state television that we had under de Gaulle." At the time, the minister of information could press a button on his desk to speak with top television producers and dictate the topics of the day.

Sarkozy's influence is more subtle. "It's like at a royal court," says journalist Daniel Schneidermann, whose widely acclaimed media watchdog show "Arrêt sur images" ("Freeze-frame") was cancelled in 2007. "The prince doesn't even have to lift a finger." His entourage apparently anticipates his every wish.

In the early 1980s Sarkozy forged ties to people who would later prove to be useful. He was the mayor of the posh Parisian suburb of Neuilly and a young star in the conservative RPR party. Using his office to bring together businessmen and media moguls, he was "networking" before the term was coined.

Defense magnate Serge Dassault, aviation heir Arnaud Lagardère and real estate tycoon Martin Bouyges -- all are friends of Sarkozy, and all need public contracts for their core businesses. Investing in media as a sideline venture has been extremely advantageous for the French oligarchs (see graphic).

In free newspapers published by industrialist Vincent Bolloré, for example, even moderately interesting visits by African heads of state are blown out of proportion as lead stories. This is good for Sarkozy as well as Bolloré, who invests in port facilities in the countries that figure prominently in his publications.

Bolloré allowed the president to use his yacht in the Mediterranean for a holiday cruise. Sarkozy knows how to thank his friends for their kindness: He pushes hard for construction projects, nuclear power plants and the sale of fighter jets. His schedule keeps him dashing from one appointment to the other -- and his hyperactivity belongs to his image.

The press has trouble keeping up with the president's relentless pace. In the first 12 months of his term in office, he took 88 trips, traveling a total of 298,000 kilometers (185,000 miles). "Every day a photo op" -- a bit of advice from his communications strategist Frank Louvrier that Sarkozy has taken to heart. Reality appears to be of negligible importance. "Only peoples perceptions count," says his former election campaign advisor Laurent Solly, who was given a top job at TF1 after the president pulled some strings.

The busy life of a president can resemble a reality show: Sarko at the wholesale market, Sarko with accident victims, among soldiers or firefighters or standing next to Gaddafi. Splashing the president across the front page boosts the circulation of even newspapers that are chronically in the red and state-subsidized. And if Carla Bruni or ex-wife Cécilia grace page one, newspaper sales go through the roof. "The French press, whether on the right or the left, is obsessed with him," says Schneidermann.

Poverty, unemployment, renewable energy, the budget deficit? The president's 50 promised reforms and many new commissions have overshadowed these pressing issues.

It leaves hardly any time for detailed research or questioning. If stevedores in Barcelona really worked twice as much as dockworkers in the port of Marseille, as Sarkozy has said, they would put in an amazing 16.6 hours a day. Sarkozy recently told the French public about an unemployed man who supposedly refused 63 offers for work -- but the story was a complete fabrication. An Employment Office staff member had made it up, and the president had been only too happy to accept it. The satirical weekly Le Canard Enchaîné tends to be the one publication to expose such hoaxes.

With his critics, though, Sarkozy takes off the gloves. It made political headlines when star news presenter Patrick Poivre d'Arvor -- the countrys most familiar face on prime-time news -- was dumped by TF1, allegedly after the president lobbied the network to fire him. Poivre d'Arvor had once described Sarkozy in a live interview as looking "like a little boy in the big boys' club" at a G-8 summit.

Another career that came to an abrupt end was that of Alain Genestar, the well-established editor-in-chief of Paris Match magazine. Back in August 2005, Genestar had published photos of Cécilia Sarkozy with her current husband.

Before the issue even hit the newsstands, Genestar called the owner of the publication, Arnaud Lagardère. He also informed Sarkozy -- with whom Genestar was on a first-name basis -- via e-mail. Sarkozy was France's interior minister at the time.

Sarkozy phoned him a few days later. Genestar couldn't get a word in. "I have never received such a phone call in my life," he wrote in a recently published memoir. The conversation consisted of a ranting monologue by Sarkozy that left Genestar "shaking."

Sarkozy blamed the journalist for the tragedy that had befallen his family, and said he would never forgive him. "That's when I knew that I would be fired," said Genestar. Later, Sarkozy bragged in front of journalists that he had been handed the editors head.

A few days after the furious phone call, sure enough, Lagardère told Genestar that he was out of a job. Lagardère, who calls Sarkozy a " brother," owes the president a lot: Sarkozy once settled an inheritance case involving his father's business.

The téléprésident's way of handling the press has made its mark on the media landscape, even on critical broadcasters like France 3. To head off political conflict the station is rushing to find the informant who leaked the clips of an affronted president to Rue89. France 3 has already threatened to file a lawsuit against the Internet magazine if it fails to promptly divulge its source.

For a long time Alain Genestar refused to believe what had happened. "If they made a big deal about giving me the sack, I figured, it would not only be bad for me, but also for the magazine, for Lagardère and for Sarkozy."

He was wrong about Sarkozy, though. "With my dismissal he proved that something like that was possible."