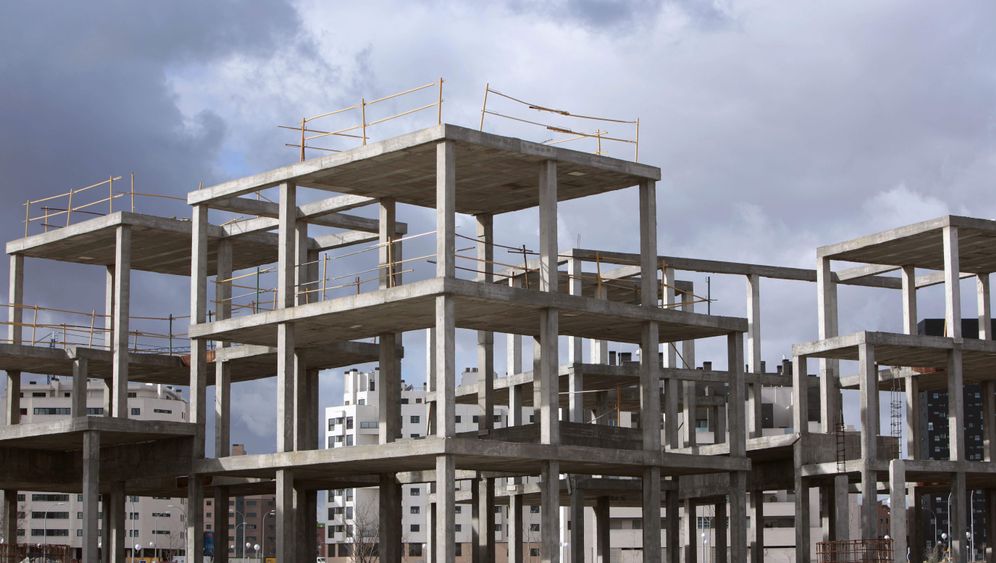 Photo Gallery: End of the Fiesta for Spain

Football is Spain's only remaining hope, the one discipline in which it can still compete in the top league. On Wednesday of last week, the daily newspaper ABC dispatched photographers and reporters around Madrid to document how the country changes when its national football team is playing. It was the day of Spain's first match in the 2010 World Cup -- at the height of the worst economic crisis the country has experienced since the end of the Franco dictatorship.

It was the same day Spanish Prime Minister Jose Luis Rodriguez Zapatero unveiled his package of labor market reforms in Madrid, reforms that, once implemented, will make Spain seem like a completely different place. The reforms received preliminary approval by Spain's parliament on Tuesday of this week, and parliament will vote on the final version -- which could include possible amendments -- by the end of the summer.

Zapatero spent two years wrestling with unions and business owners over the reforms. No agreement was reached, and Zapatero paid a high price for his trouble. The soft-spoken man, once nicknamed "Bambi," is now referred to in the press as the "butcher of the working class." His approval ratings have tanked, with more than three-quarters of poll respondents saying that they no longer have any confidence in his performance. "This is the most important June of my political life," he told a member of his staff in confidence, "and the most important June in recent Spanish history."

For most Spaniards, however, last Wednesday was simply the day Spain played its first World Cup match. Reporters were everywhere in Madrid, standing in front of the Bernabéu Stadium, in the subway and on the Gran Via. They watched as the streets filled with people, they counted the numbers of people in the subway stations and spent the day researching as much as they could. Suddenly every number seemed significant in the pursuit of one question: What's wrong with this country?

Spain used to be cool. It had Europe's best weather. It had filmmaker Pedro Almodóvar, actress Penelope Cruz and Ferran Adrià, the world's top chef. It had the fashion giant Inditex, Europe's biggest fashion retailer and the owner of the Zara brand. Its athletes included the European champions in football and the winner of the Wimbledon tournament in tennis. It also had Banco Santander, which did not speculate wildly in the runup to the first financial crisis and did not require a government bailout.

Spain was the country that generated a budget surplus three years in a row, created 5 million new jobs since the turn of the millennium and produced growth rates above the European average. Spain, the fourth-largest economy in the euro zone, had become an economic heavyweight.

These were remarkable achievements. A country where people were still using donkey carts in the 1970s and that had sent hundreds of thousands of guest workers to northern Europe had become the California of Europe. And Zapatero, the prophet of this Spanish miracle, combined the economic boom with a new civic culture. Over the sharp protestations of the bishops, he introduced gay marriage and provisions permitting abortion in the first three months of pregnancy, appointed more women than men to his cabinet and accelerated the divorce process.

Only two years ago, Spain was a superstar. But then the crisis arrived.

Since 2008, more than 2 million people in Spain have lost their jobs. The unemployment rate has jumped from about 8 percent to almost 20 percent, and is even as high as 40 percent among young people.

More wealthy Spaniards than ever are taking their money abroad for safekeeping. Nowadays, they are in regular telephone contact with their private bankers in Switzerland, Luxembourg and Britain. "There has been a significant rise in inquiries from Spain and Greece," says Peter Fanconi, head of the private banking division at Bank Vontobel in Zurich.

"My Spanish customers are panicking," says the director of one private bank in Geneva. "They're worried that the government will soon impose special taxes on the affluent or even freeze their accounts." The Spanish customers, he adds, are also exchanging their euros for US dollars, Swiss francs and Norwegian kroner.

Was the Spanish boom merely a flash in the pan? As great as the enthusiasm once was, confidence in the country's economy is now fading rapidly.

The rating agency Standard & Poor's downgraded Spain's credit rating in late April. When the government issued a three-year bond two weeks ago, investors were already demanding a 3.3 percent return, which was a third more than in April.

Is Spain the Next Greece?

In the world's financial centers, traders are now asking themselves the same questions they were asking four months ago about Greece: Is this increase in bond yields a fixed trend? Will the reforms that Zapatero announced last week be enough to stem the loss of confidence? Or will the rise in bond yields lead to a debt spiral? With an economy almost five times as big as Greece's, could Spain pose a threat to all of Europe?

Starting July 1, the country will have the option of taking advantage of the rescue fund set up by the European Union and the International Monetary Fund, but even a declaration of intent could have a detrimental effect on the costs of future borrowing.

Spain is downplaying its problems. The government insists that there are no negotiations over a rescue package. To put an end to rumors that Spain could be entering a serious debt crisis, the governor of the Bank of Spain, Miguel Ordonez, called for the release of the confidential results of stress tests performed on Spanish commercial banks. On Thursday, EU leaders also agreed that more transparency was needed.

At the moment, the Spanish government doesn't appear to be in such bad shape. The country owes about €550 billion, which constituted 53 percent of its gross domestic product in 2009. Germany's debt to GDP ratio was 73 percent, Italy's was 115 percent and Japan's was more than 200 percent. Nevertheless, economists fear that Spain's debt could quickly grow. While the country achieved a budget surplus in 2007, last year it incurred the highest level of new debt in 14 years.

Skepticism about Spain is partly due to the fact that the country's boom was not based primarily on the strength of the local economy, but was largely attributable to external factors -- and a design flaw that goes back to the introduction of the euro.

When Spain joined the euro zone, its currency, the peseta, was relatively weak. As a result, prices rose quickly at first. Normally, a central bank reacts to a rapid rise in inflation by raising the base borrowing rate. But because there had been only one base rate for the entire euro zone since the introduction of the euro, and because countries like Germany and France had significantly lower inflation rates, the European Central Bank did not react. In other words, interest rates remained low, sometime even lower than the inflation rate in Spain. In some months, Spain had real interest rates of zero, which practically eliminated the cost of borrowing.

That was the foundation of the Iberian boom, because it enabled Spaniards to borrow money and buy real estate. Others took out home equity loans on their real estate after home values had risen rapidly, and then spent the money on consumer goods. Some 800,000 new housing units were built each year, more than in Germany, Italy and France combined. Soon it was customary, even for the middle class, to own a second or third home or condominium on the beach -- simply as a form of investment. The building sector constituted up to 11 percent of GDP, and even today's figure of 9 percent of GDP is almost twice as high as in many other economies.

The government also jumped on the development bandwagon. It built a high-speed rail line from Madrid to Seville, and another one to Barcelona. It had airports and saltwater desalination plants built, and major cities splurged on convention centers and stadiums. Two cargo and charter airports were built in the Castile-La Mancha region, and a complex of 13,500 new apartments for commuters went up in Sesena near Madrid.

When the crisis erupted in 2008, bringing double-digit declines in real estate prices, Spain lacked other industries to offset the sharp decline in construction. Tourism and agriculture, the country's two other main sectors, have also been hard hit, while industry makes up only 11.7 percent of GDP (compared with 26 percent in Germany). To make matters worse, Spain invests only 1 percent of GDP into research and development of new technologies.

Spain also has a serious education problem. Spaniards are significantly less well-educated than other Europeans. Some 30 percent of children don't even finish their mandatory schooling, which is twice as high as the EU average.

Sociologists have already coined an expression to describe young Spaniards: "Generación ni-ni," the neither-nor generation. They neither study nor support themselves, and have no jobs and no prospects. Already more than half of 18-to-34-year-olds defined themselves as "ni-nis" in a poll conducted last summer.

Spain's biggest challenges are yet to come, primarily because of the impending debt crisis among banks. In the wake of the real estate crash, more than a third of all mortgage loans, worth a total of €165 billion, can now be classified as problematic. In particular, savings banks, which had far more aggressive lending practices than commercial banks, are seen as highly unpredictable risks.

Last year, the Spanish central bank had to rescue the struggling regional savings bank Caja Castilla La Mancha with a €9 billion loan guarantee, and three weeks ago it placed another savings bank, CajaSur, under government oversight and provided it with €550 million in emergency aid. Many of the country's 45 savings banks can no longer survive on their own. Under the central bank's plan, only 20 savings banks will remain in existence. But reforms cost money. Caja Madrid, which is in the process of merging with six smaller banks to form Spain's largest savings bank, has applied for €4.5 billion in government bailout loans.

The banks' problems are one of the reasons Zapatero has imposed strict spending cuts on the country. Under his plan, the government will save about €65 billion across the board by 2013. Civil servants will face a 5 percent pay cut starting in June, and next year their salaries will be frozen altogether. Some 13,000 public sector jobs are likely to be eliminated. Retirees will face a pension freeze in 2011, and early retirement will become more difficult.

'The Party Will Continue'

The days of doping are over, and it's high time that this now-sluggish superstar returned to the training camp. It can count itself lucky if it doesn't suffer a heart attack as a result of years of careless living.

At Bernabéu Stadium, the home of Real Madrid, last Wednesday afternoon, where the World Cup game was being shown on a large screen, the Spanish fans waited patiently for their team to score its first goal. But it was the Swiss who ended up scoring. Then time began running out, and 20,000 Spanish fans began chanting the same battle cry again and again: "podemos, podemos" ("we can do it, we can do it"). But then the match was over and Spain had lost 0:1.

For a moment, no one knew what to say. Then someone went up to the microphone and said: "No problem, we'll see you on Monday again. Then the party will continue."