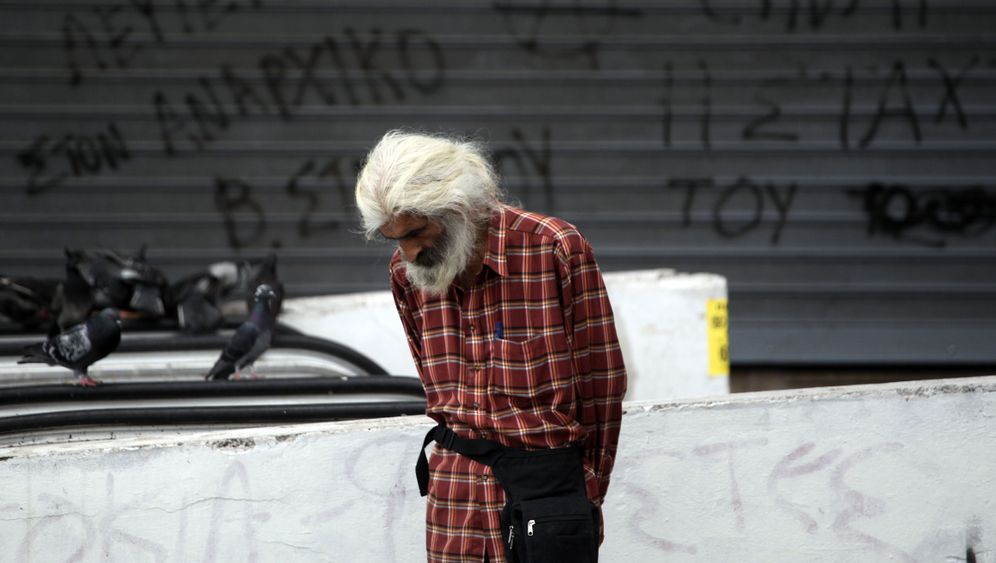 This time, the fight for survival last exactly 29 minutes. At precisely 3 p.m., Father Andreas, a 37-year-old Greek Orthodox priest, opens the doors of the food bank in downtown Athens. At this hour, the line of hungry people stretches all the way across the large square outside and into the street. Needy people of all ages are waiting patiently -- pensioners, unemployed people, mothers with children, immigrants, asylum seekers. "We can't let these people starve," the priest says. "They are already suffering so much. They should at least not go without food."

It is a charitable deed. But in just under half an hour, all of the kitchen's 1,200 servings have been taken, causing several dozen people to leave with empty hands and growling stomachs. They can only hope to be among the lucky ones next time.

Katarina was one of the lucky ones. The 44-year-old got her hands on eight servings of a salad made of carrots, potatoes and peas, several yoghurts and a bag of bread -- the only food her family will have today. Katarina is ashamed and prefers not to give her full name. She and her 7-year-old daughter have to take a bus in from a suburb and travel all the way across the sprawling city just to get a warm meal.

Katarina was laid off from her job at a biscuit factory roughly a year ago. Since then, she's been forced to rely on the handouts paid for by what Father Andreas calls "holy money." Katarina says there are no more jobs to be had. "No one will even pay you to stuff mailboxes with advertisements anymore," she says. "Greece is finished."

Spyros Xaplanteris has been coming to the food bank for a year. His shirt is greasy, his trousers tattered. "I'm driven here by need," he say. The 62-year-old lost his job in the storeroom of a Hilton hotel. "It hurts," he says. "But what am I supposed to do? I'm broke."

For weeks, thousands of enraged Greeks have been holding anti-government demonstrations outside Greece's parliament building. They come with bullhorns and banners, and a couple hundred also bring stones and Molotov cocktails. Camera crews from around the world are always there to film them, but they never turn their lenses toward those in the dark back alleys of central Athens.

In recent weeks, the needs of such people have been keeping Father Andreas and his colleagues very busy. Almost all of the 400 parishes in the Archdiocese of Athens have opened food banks like the one he runs. City officials have opened some as well.

His food bank distributes meals three times at day. Up to 2,000 come at noon, another 1,200 in the afternoon, and about another 1,000 in the evening. The workers try to make sure that they don't always supply the same people. Such vigilance is necessary because "the number of needy is skyrocketing," says one volunteer who estimates that the figure has increased by 30 percent in recent months. "But we can't be sure it will stay there," she says.

Most people who come to the food bank are so hungry that they eat their food right there on the square. They hunker down on benches and walls covered with pigeon droppings and drink water from sprinkler hoses.

Choked to Death by Belt-Tightening

Last week, Prime Minister Georgios Papandreou once again succeeded in getting a majority of Greek lawmakers to push through an austerity and privatization package worth €78 billion ($111 billion). In doing so, he was responding to pressure from the International Monetary Fund (IMF), the European Central Bank (ECB) and the European Commission. Indeed, many economic experts see the package's measures as the only way to fend off an imminent national bankruptcy at the last minute -- and the only way to save the euro from an even worse fate.

But is Papandreou saving his country to death? Savas Robolis thinks he is. "People are afraid," the 65-year-old says -- they're afraid of an uncertain future. Employees are particularly scared because they carry an unfairly high proportion of the tax burden. As a professor of economics and social policy at Athens' Panteion University and director of the Labor Institute of the General Confederation of Greek Workers, Robolis knows what he's talking about.

According to his calculations, roughly 930,000 of Greece's 960,000 registered companies have fewer than five employees. Most of these very small companies are "not very competitive," he says, and primarily focus on providing products and services to the 3.5 million private households in Greece. If household incomes sink, consumer demand will automatically fall as well. As Robolis sees it, this would mean a swift end to these small companies because they don't have enough liquidity to tide them over.

"That's exactly what's happened," Robolis complains. Over the last year, roughly 60,000 of these mini-companies have gone belly up, and he predicts at least as many closings in 2011.

In 2010, the number of jobless in Greece rose by 230,000, to reach 14.8 percent. Given Greece's weak social safety net, unemployment is more or less tantamount to social bankruptcy. For example, unemployment benefits are only available for a year at a monthly rate of less than €500. After that, the state offers practically no assistance. Officials estimate that only about 280,000 of the 800,000 people without jobs are still eligible to claim unemployment benefits. This has resulted in a dramatic rise in the number of homeless people -- by up to 25 percent in Athens alone.

According to official data, unemployment is expected to climb to between 17 percent and 18 percent by the end of 2011, but the true figure could be as high as 23 percent. "That would be 1.2 million jobless people," Robolis says. The last time Greece saw something like this was in 1961, when the introduction of modern farming technology put thousands of agricultural laborers out of work.

At that time, the result was a wave of emigration to places like Germany. Robolis thinks the same thing could happen today -- but with one big difference: The people who left Greece in the 1960s were mostly unskilled workers. Robolis fears that the coming wave could be well-educated individuals with college degrees.

Greece has its tourist attractions and agricultural products. But apart from beaches, olive oil and feta, the economy doesn't have much to offer. As much as 70 percent of of Greece's economic output depends on private consumption, according to a recent study of the Friedrich Ebert Stiftung, a think tank with ties to Germany's center-left Social Democratic Party (SPD).

However, according to the study, in the last quarter of 2010, reductions in salaries and pensions drove consumption down 8.6 percent, retail sales shrank by 12 percent and 65,000 stores had to be shut down. Robolis predicts that, by 2015, when the new austerity measures are scheduled to take full effect, the standard of living for employees and pensioners will be 40 percent lower than it was in 2008. "That is deeply unsettling," he says.

Tax Cheats Have Nothing to Fear

Anxiety over current and future hardships is driving many Greeks into the streets. But while the lines continue to get longer outside food banks, many of the wealthy are getting through the crisis more or less unscathed. The average Greek consumer is now forced to pay the third-highest VAT rate in Europe, the third-highest social insurance contributions and the second-highest fuel taxes.

Two-thirds of Greeks regularly pay their taxes as well. Indeed, "contrary to widespread views," as the Friedrich Ebert Stiftung study put it, these taxes are automatically deducted along with social contributions from the paychecks of Greeks employed in both the private and public sectors. It is mainly the small wealthy class that manages to cheat the authorities out of €40 billion in tax each year. That is the OECD's estimated volume of annual tax evasion. The Greek central bank puts the losses at somewhere between €15 billion and €20 billion.

These tax cheats have little to fear. As Panos Kazakos, an Athens-based professor of politics, puts it: "I have never seen a single person put in jail for tax evasion." Robolis adds that the government, which supposedly has no money available for social services, just published a list of companies that owe the state a total of €9 billion in social contributions -- but it does nothing to get that money.

This injustice is what is making people in Greece so angry. The government has promised to change the system. But Robolis no longer has faith in its pledges. "This situation has been going on for 30 or more years," he complains. "They're just trying to protect themselves with these statements." 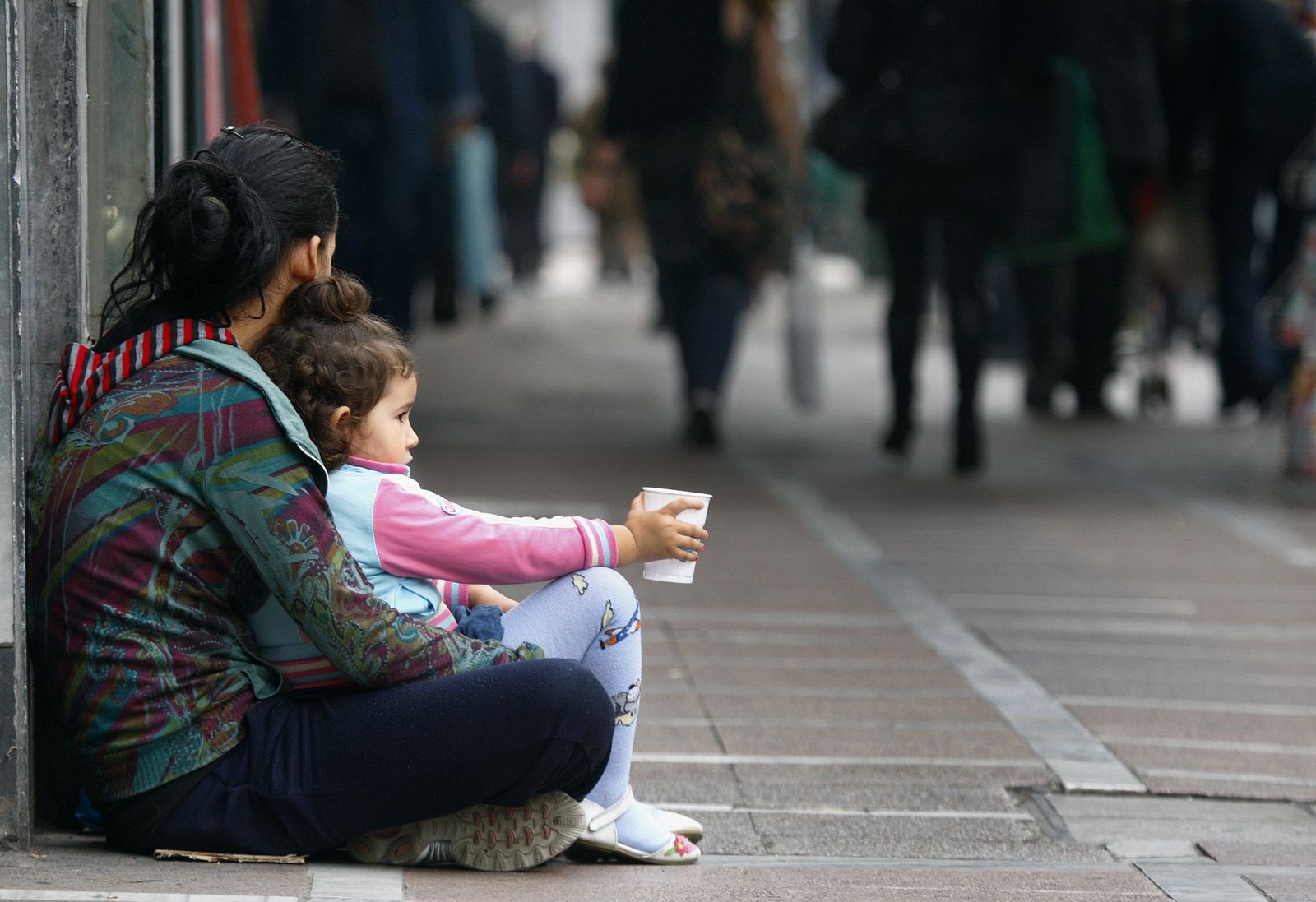 A beggar with her child in the center of Athens. There has been a dramatic rise in the number of homeless people -- by up to 25 percent in Athens alone.