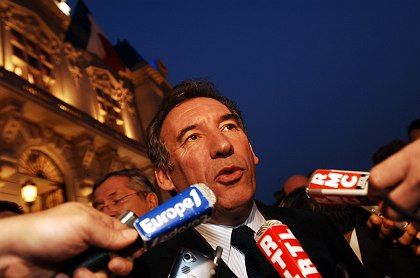 The centrist candidate Francois Bayrou has made surprising strides in the French presidential election campaign.

They are called "sharpshooters" at the headquarters of the Nicolas Sarkozy campaign -- a team of seasoned political strategists who, from their offices on Rue d'Enghien, monitor the public appearances of Sarkozy's rivals and come up with whatever it takes to discredit them -- from criticism to accusations to dirty underhandedness. But only major rivals receive the treatment. Minor irritants like François Bayrou have been simply ignored by the campaign experts from the UMP, France's governing party.

Until now. Bayrou, a died-in-the-wool centrist, is slowly turning French political certainties on their heads. According to the opinion polls François Bayrou, the chairman of the small, pro-European Union for French Democracy (UDF), has caught up with candidate Ségolène Royal -- both with 23 percent support. Within Royal's Socialist Party, Bayrou's rise has not been well received.

The surprise centrist candidate's poll numbers are also coming uncomfortably close to Sarkozy's 29 percent. Growing uncertainty can also be felt within the UMP -- according to Le Parisien, Bayrou's spectacular rise has already triggered a "tinge of panic" among some advisors to the Interior Minister Sarkozy.

Bayrou was long the ridiculed outsider: as good as gold, honest, hard-working, but cursed with the charisma of a village teacher. When conservatives, centrists and liberals joined together in 2002 and formed the UMP to oppose right-wing extremist Jean-Marie Le Pen, Bayrou remained at the head of his UDF, seemingly excluded from the ensuing power struggle.

Neither the right nor the left

Now, five years down the road, Bayrou is celebrating a surprise comeback that has made him a serious challenger to the two leading candidates for president. With only five weeks to go before the first round of elections, the anticipated showdown between the conservative candidate Sarkozy and socialist Royal has turned into a skirmish with the great unknown. The greatest challenge for the election campaign, according to Le Monde, is that of facing up to the "uncertainty, distrust and disloyalty" of voters: According to a survey carried out by the daily, more than 60 percent of voters have confidence in "neither the right nor the left."

Bayrou is benefiting massively from this lack of trust, much as right-wing politician Jean-Marie Le Pen did in the last presidential election when Le Pen managed to squeak his way into the run-off against Chirac. This time around, Bayrou leads Le Pen by a wide margin. Initially popular among teachers, government bureaucrats and retirees, Bayrou is now gaining ground with blue-collar workers, low-level white-collar workers and young voters. "Bayrou," says political scientist Roland Cayrol, "stopped being a middle-class phenomenon long ago."

The 55-year-old Catholic, a father of six children and farmer from the southwestern French Béarn region, has figured out how to position himself as an anti-establishment candidate, hero of the common man and antidote to voters' dissatisfaction with the government and politics. Bayrou presents himself as a "peacemaker" who stands above the traditional trench warfare between the right and the left, a struggle that has so far consumed the full attention and energy of the frontrunners.

Bayrou aims to arm France for the challenges of globalization with a government of national unity made up of "people of good faith." He calls this recipe for success "revolutionary centrism" and insists that it will address two contradictory expectations of the French in equal measure: the yearning for change and the need for security.

This is the message Bayrou, a former education minister, has been taking to France's villages and small cities in recent months. And it is there, on the political periphery, where Bayrou's ideas fall upon receptive ears. Where established party politicians Sarkozy and Royal seek to mitigate the country's problems with millions in subsidies from the government's coffers, Bayrou is calling for strict budgetary discipline, a greater role for parliament and sweeping education reforms.

"Until now the UMP and PS agreed on only one issue: that I did not exist," Bayrou, the once-ridiculed candidate, says mockingly. "Now that I stand a chance of entering the second round, they'll certainly be paying attention."

That his political rivals will be paying attention to Bayrou is an understatement. Buoyed by his surge in the opinion polls, the "thunderclap" (Bayrou's name for himself) is currently upsetting all the campaign predictions. Indeed, demographers believe that if this moderate centrist candidate manages to beat one of the two top candidates in the first round, he stands a good chance of winning the run-off election and moving into the Elysée Palace.

The two-way race has become a three-way sprint.

Because the French tend to follow their ideological tendencies in the first round of the presidential election, many parties emerge with results in the single digits. As a result of this fragmentation of the vote, the major parties' candidates routinely fall short of the 50-percent margin needed to win the presidency. Two weeks later, when the two leading candidates face off in the second round, voters are more likely to cast their votes on the basis of pragmatic considerations.

This is precisely where Bayrou's opportunity lies, should he prevail in the first round against Royal or Sarkozy. If that happens, the socialists, for whom the mere idea of a President Sarkozy seems nightmarish, will vote almost unanimously for Bayrou, acting on the principle of "TSS" -- tout sauf Sarkozy or anything but Sarkozy. Bayrou's chances against socialist candidate Royal are equally promising, because the conservative UMP voters will act according to their own "TSS" principle -- tout sauf Ségolène.

Bayrou's unexpectedly strong showing has already reignited the factional dispute between Royal and her party's traditional wing: Should the PS emphasize its commitment to the left and appeal to all "progressive elements" or should it open itself up to a social democratic center?

The number of fickle voters within the party is growing. The group Socialist Party leader François Hollande calls the "renegades" either question Ségolène's competence or believe that Bayrou's calls for "social democracy" are more genuine.

His evocation of national unanimity is also perilous for UMP candidate Sarkozy. Bayrou, who has held cabinet posts in the conservative administrations of Edouard Balladur and Alain Juppé, stems from the center-right and stands a good chance of deriving most of his votes from that side of the political spectrum. More importantly Bayrou conveys an impression of reliability next to the often nervous-seeming Sarkozy.

Bayrou's "Project Hope" plays on patriotic sentiments, and his vision of a "republic with a heart" conjures up images of a future made up of nostalgia and the Internet. While Sarkozy's power-hungry ambitions for the country's highest office are disquieting ("All I need is one more step"), the centrist candidate cultivates an image of the country gentleman with the common touch. "As president," vows Bayrou, "I will not lock myself into the Elysée. I will tell the truth every day."

The UMP experts haven't found an antidote yet to so much innocent populism. Because looking the other way is no longer an option, a separate "Bayrou cell" was recently formed to devise the appropriate strategy. Sarkozy's campaign manager has suggested "mobilizing our supporters." "We must make it clear," says Claude Guéant, "that Bayrou's third option is nothing but a futile dream."

To "let the air out of" Bayrou's glowing nonpartisanship, Sarkozy is instructing his campaign workers to examine the candidate's past for missteps. At the same time, the UMP leader has sharpened his campaign rhetoric and cozied up to the right.

At first Sarkozy welcomed Le Pen's presidential candidacy, in the hope of gaining the support of the extremist right-wing members of the Front National for the runoff vote. Then he sought to portray himself as an ardent patriot in a campaign speech by mentioning the word France 113 times. Finally, he surprised even his own supporters by proposing the establishment of a ministry of immigration and national identity.

"As fast as my tractor can go"

Sarkozy is capitalizing on xenophobia by combining controls on immigration with an agency to promote French national identity. By stirring up a classic confrontational issue, he seeks to divert attention away from current problems like unemployment, the housing shortage and inflation.

Whether the UMP candidate will truly score points against the increasingly popular Bayrou by seeking to capitalize on the issues of the far right remains to be seen. "The fact that Bayrou is in the lead among the so-called lower social classes proves that his voters are voting out of conviction, not confusion," says pollster Stéphane Rozès. "The French feel a need to change the political landscape."

The man who has taken it upon himself to bring about this change plans to continue his successful run during the crucial end stages of the campaign. "A president is not a leader of the right or the left, but the president of all Frenchmen," Bayrou repeatedly tells his audiences as he steadily makes his way through the suburbs and rural regions of the country and displays a fondness for agricultural metaphors: "I plow my furrows only as fast as my tractor can go."