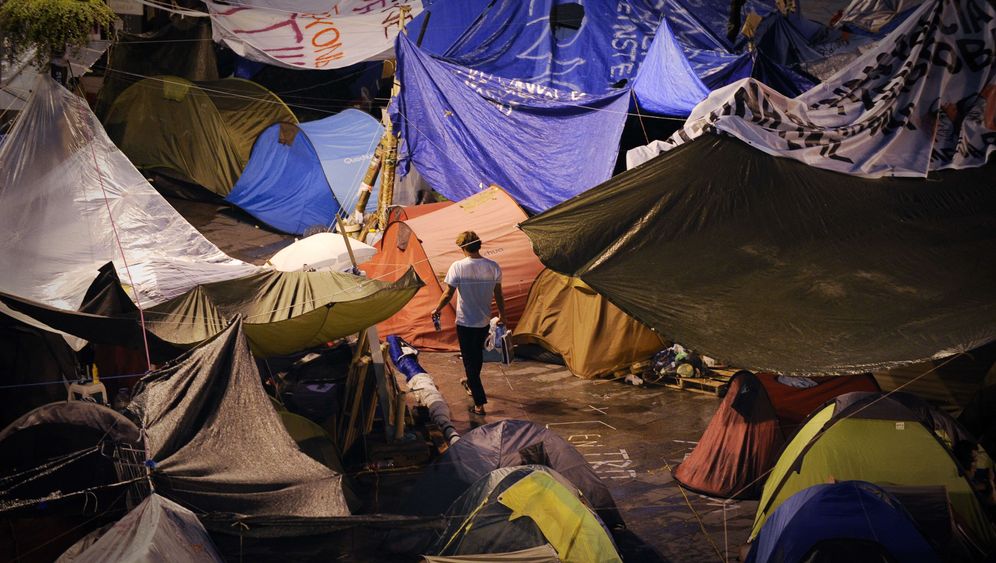 Photo Gallery: Youth Rebellion on the Streets of Europe

Any real revolution in Paris has to include the storming of the Bastille. Which explains why 200 young demonstrators are sitting in the shade of the trees at Place de la Bastille on this Thursday evening, wondering how to go about staging such a revolution.

Their numbers had already swelled to more than 2,000 by the Sunday before, when they had occupied the entrance to the Bastille Opera and half the square. But then the police arrived with teargas and, since then, have kept strict watch over this symbolic site.

The protestors are trying to create a movement to rival the protests in Madrid and Lisbon. They want tens of thousands of young people to march in the streets of Paris, calling for "démocratie réelle," or real democracy. They believe that there is also potential for such large-scale protest in France, with youth unemployment at more than 20 percent, precarious working conditions and what feels like a constant state of crisis.

"Until now, our problems were always seen as individual problems," says Julien, a 22-year-old physics student who has joined a group called Actions. "You were told that if you couldn't find a job, it was your own fault. Perhaps we are now experiencing a change taking place, and that we are joining forces to form a pan-European movement against this system."

There is a feeling that unites young people throughout Europe, namely the belief that they will not be able to attain the same level of prosperity as their parents did. They feel that they have no future. They are well-trained, and yet they are not finding any jobs. This feeling has been smoldering for years, affecting the generation of "crisis children," who grew up in a world shaped by economic and other crises, but who never took to the streets to fight for their interests.

But a fundamental change is taking place. On March 12, 200,000 people marched down the Avenida de Liberdade, or Avenue of Freedom, in Lisbon. It was the biggest demonstration in Portugal since the 1974 Carnation Revolution, a march of the lost generation.

As in Cairo months ago, everything began on Facebook -- with an appeal that Alexandre de Sousa Carvalho and some of his former fellow students at the University of Coimbra posted. They called upon the Geração à rasca (or "generation of junk"), to join together in protest. "We, the unemployed, the underpaid and the interns, are the best educated generation in the country's history," they wrote. "We are protesting so that those responsible for our precarious situation quickly change this untenable reality."

Carvalho, 25, who studied international relations, is a polite young man with a beard and a leather armband on his wrist. He says that he is normally a patient person. But when he discovered that, despite having obtained a master's degree in English, he would likely only be able to get a limited contract and that he would likely be forced to find work in Africa, he was overcome with fury.

Portugal is the fourth-poorest country in the euro zone. Even in Greece, the per capita gross domestic product is higher. Unemployment has almost doubled to 12.6 percent in six years; among people under 25, the jobless rate is 27 percent. Of those who do have jobs, more than half are working in temporary positions. Many are pseudo self-employed, earn very little and must pay a tax rate of up to 50 percent. They receive no social insurance benefits.

Carvalho says that a song by the band Deolinda inspired them to protest. The lyrics epitomized their feelings about life: "I'm from the generation that doesn't get paid. It doesn't bother me. How stupid can I be? Things are going poorly, and that's the way it will stay. Those who can land an internship are lucky. What a stupid world this is, a world in which we go to school to become slaves."

They had never imagined that so many people would end up taking to the streets. Nor did they think that it would be the beginning of a movement that would take hold in other countries, too. The organizers of the protests in Spain and France contacted him, says Carvalho. They wanted to know how to bring anarchists, right-wing activists, Trotskyists and Catholics together into the streets without a single windowpane being smashed.

In the last few months, the world has gotten used to the images of young people occupying streets and squares. It is familiar with these scenes from Avenue Habib Bourguiba in Tunis, Tahrir Square in Cairo and the Pearl Roundabout in Bahrain. Those are the images of the Arab revolution, and now there are similar scenes unfolding in Europe.

But what do they have in common? The Arab countries are among the poorest in the world. More than half the population is younger than 25. Europe, by contrast, is rich and young people are a minority in societies that are getting older and older. In Arab countries, young people are fighting for democratic rights, while Europe's youth are protesting because they are worried about decline.

Images from the Arab World

In both cases, the protesters are well-educated young people who are unable to find work. They are the driving force of all revolutions. The tools of the demonstrations are also similar, with young people using social networks to organize but lacking central leadership. It almost seems as if the European youth needed the images from the Arab world to finally stand up on their own.

A tent city has been set up on Puerta del Sol in Madrid, the most famous square in Spain, for three weeks. The square has become the world of the "indignados," the indignant. The protesters began building the tent city on May 15, a week before local and regional elections. About 100 people spent the night in the first few nights, but then the election council declared the camp to be illegal -- which only resulted in its growing even faster. On the Sunday of the elections, 30,000 people filled the square and nearby streets, protesting against the economic crisis, incompetent politicians and corruption.

They are also trying their hand at direct democracy. Citizens are encouraged to thrown their suggestions into cardboard boxes set up on the square. Every evening, a committee meets to discuss short-term political ideas and those that are more future-oriented. Two weekends ago, the protesters held gatherings in 120 districts of the capital. They now intend to use these gatherings to refine their ideas and have decided only to meet on Puerta del Sol once a week.

Apolitical young people who long believed that conformity was the best strategy for getting by, have become political overnight. This is perhaps the most astonishing conclusion to be reached by observing this movement. And it also applies to France and Portugal, where the protesters are demanding direct citizen participation and are collecting signatures to support bills aimed at improving the situation of young people.

'I'll Have to Go Abroad'

Patri, an 18-year-old woman, was at the protests in Madrid almost from the start. Last Wednesday, she was sitting at the communication stand in her gray hooded sweatshirt. She was coughing and had dark circles under her weary eyes. Nevertheless, she still wants to stay. "We're making history now," she says. "A chance like this will not come again." Patri is a first-year university student studying English and German. She wants to become a translator. "But I'll have to go abroad," she adds.

More than 44 percent of people under 25 have no work in Spain, and almost one in three young academics is unemployed. More than half of those young workers who are employed have so-called garbage contracts, which are often limited to just a few weeks. Even during the boom years, young people suffered from bad schools, expensive universities and a slim job market. Since the real estate bubble burst three years ago and the crisis erupted, young people, once again, are the ones suffering the most.

In other parts of Europe, the situation among young people is not nearly as desperate as it is in Spain, Portugal or Greece. Still, many can identify with their frustration -- and offshoots of the protests are gradually reaching other European cities. Young people, albeit only a few hundred, have taken to the streets in Hamburg, Vienna and Rome.

Ironically, a 93-year-old Frenchman provided the template for the youth protests. "Indignez-vous!" or "Be Outraged!" is the polemic pamphlet that the former French resistance fighter Stéphane Hessel published last year. The Spanish "indignados" and the French "indignées" have borrowed their names from Hessel's title.

Although Hessel did not establish the pan-European movement himself, he is demanding something that has once again become en vogue after years of apathy: citizen involvement. His appeal is both vague and sufficiently serious to garner approval in many European camps. He advocates nonviolent action in a world in which there is an ever-widening gap between rich and poor.

Although the indignées in France are not yet as numerous as the protesters in Lisbon, Madrid or Athens, they are well organized. In Paris, they sit in the median strip of a boulevard and devise communiqués and plans of attack, but they do so in a very civilized way. When one of them speaks, the others indicate approval or disapproval with hand signals. It looks like a classroom at a university.

Sitting a few steps away from them is a group of Arab youth from the Paris suburbs, the banlieue, where unemployment is the highest and where cars are still being set on fire. They look perplexed as they observe this strange gathering, and occasionally one of them hurls an insult at the indignées. But the activists are mild-mannered and well-behaved, and no one reacts. They also want to remain peaceful when they storm the Bastille.