If there is one thing Ayasha Nour never wanted to experience again, it was to be locked up without knowing what was happening to her. Nour, a French teacher from Damascus, spent 20 days in Moria, a refugee camp on the Greek island of Lesbos. She slept on the ground in an overcrowded tent and it was cold with not enough to eat. She repeatedly asked the Greek officials when a decision would be made on her asylum application, but they kept putting her off. "Sometimes they would say a week, sometimes a month and sometimes a year," says Nour.

At the end of April, the young Syrian gave up hope of ever reaching northern Europe, so she decided to return to Turkey voluntarily. Officers with Frontex, the European Union's border protection agency, accompanied Nour and 11 other Syrian refugees on the flight from Lesbos to southeastern Turkey. According to Nour, before she left Lesbos officials had promised that she could apply for asylum in Turkey and would be allowed to move around freely there. But immediately after landing in Turkey, she and the other returning refugees were taken away -- as if they were criminals, says Nour.

She has now been in an internment camp in Düziçi, a city on the Turkish-Syrian border, for four weeks. "It's like Moria, only worse," the Syrian woman says on the telephone. She doesn't want us to use her real name for fear of reprisals from the Turkish guards.

The internment of Syrian refugees raises new doubts over the controversial refugee agreement between Europe and Turkey. Indeed, it appears that the deal is on the verge of falling apart, only two months after the program began.

The EU had promised Turkish President Recep Tayyip Erdogan 6 billion ($6.7 billion) and political concessions if his government would take back migrants who reach Greece via Turkey. One of the commitments Ankara made in a letter to the European Commission was to provide temporary protection to Syrian returnees.

German Chancellor Angela Merkel has praised the deal with Turkey as a humane alternative to sealing off Europe's internal borders. But the fact that the first Syrians who were brought to Turkey from Greece as part of the new agreement were taken directly to a detention center is not only a violation of international refugee law, but also an affront to Merkel.

As in the dispute over the promise of visa-free travel in the EU for Turkish citizens, Erdogan's message is clear: We may have signed a pact, but I determine the rules of the game. This also applies to the selection of refugees Turkey sends to the European Union, which includes a conspicuously large number of "serious medical cases."

Hundreds of refugees are confined in Düziçi. Unlike Nour, many of them didn't make it to Greece. Some were arbitrarily arrested in Turkey, while others were detained for begging on the streets or selling tissues, reports the Turkish human rights organization Mülteci-Der.

Nour was trying to reach London to join her husband. She is pregnant, and yet she is not permitted to leave the Düziçi camp to see a doctor or meet with an attorney. "I don't know what will happen next or when I will finally be released," she says.

Migrants sleeping at the Moria camp on the Greek island of Lesbos.

A woman from Aleppo who was deported from Lesbos to Düziçi with her four children complains that the cells are overcrowded and the food is full of insects. Her son is having respiratory problems, she says. A fellow detainee tried to commit suicide with a shard of glass. "Düziçi is hell," she says in a broken voice. The Turkish authorities claim that the Syrians are released once security checks are complete.

Human rights organizations have warned that the rights of migrants returning from Greece to Turkey are not guaranteed. The Pakistanis, Afghans and Algerians who were deported from the Greek islands of Lesbos and Chios in early April were almost all sent to a deportation center in Kirklareli on the Turkish-Bulgarian border.

The center is off-limits to journalists, aid organizations and attorneys. Cornelia Ernst, a member of the European Parliament from Germany's Left Party, visited the facility in early May and said that conditions there were "shocking" and that detainees are often only permitted to leave their cells for a few minutes every day. According to Mülteci-Der, migrants at the camp are systematically hampered in their efforts to gain access to asylum procedures.

The latest reports on the arrests of Syrians have even raised doubts among supporters of the deal. The internment of people entitled to protection calls a central premise of the treaty into question, says Gerald Knaus, chairman of the international think tank European Stability Initiative -- namely that "refugees who are deported from Greece are safe in Turkey." Knaus' organization played an instrumental role in developing the deal with Turkey and advised EU countries.

Brussels expected that Greece would use expedited procedures to send migrants back to Turkey within a few days. But nothing is happening quickly at the moment, primarily because Greek asylum officials and judges are having qualms about recognizing Turkey as a "safe third country," as demanded by Brussels. They apparently share the concerns of human rights activists and legal experts, who have repeatedly pointed to the precarious living conditions among migrants in Turkey. "I have faith in the independence of the appeals committee," says Ska Keller, deputy Green Party leader in the European Parliament, who was in Lesbos recently.

It is becoming increasingly difficult to maintain the claim that Turkey is a safe place for refugees. According to Amnesty International, Turkish authorities have deported hundreds of refugees from Turkey back to Syria in recent months. In early May, Human Rights Watch documented the cases or five Syrian refugees who were shot dead while attempting to enter Turkey, allegedly by Turkish border troops. The Syrian Observatory for Human Rights reported 16 deaths at the Syrian-Turkish border between December 2015 and March 2016.

The EU has sent 390 migrants from Greece back to Turkey since early April, far fewer than planned. About 8,000 migrants, a third of them Syrians, remain in the Aegean islands. The European Commission now believes that Greek appellate judges may stop one in three deportations of Syrians. "This strikes at the core of the deal," said a senior Brussels official.

Europe's goal with the Turkey agreement is deterrence. In recent weeks, a number of migrants have indeed chosen not to leave Turkey for Greece, fearing that they would be sent back. If it now emerges that the Greeks are not deporting migrants nearly as quickly as anticipated, many more refugees could risk the voyage across the sea again soon, predicts Metin Çorabatir, chairman of the Ankara-based Research Center on Asylum and Migration (IGAM).

Frontex officials escort a migrant onto a boat heading back to Turkey from the Greek island of Lesbos.

But the camps on the Greek island are already overcrowded. Food is scarce and migrants have set garbage cans on fire to protest conditions in the camps. "We don't know what we'll do if even more people arrive," says an official with the Greek Ministry of Migration. Political consultant Knaus calls it a "disaster in the making."

Nevertheless, the European Union is clinging to the deal, despite the tense climate between Brussels and Ankara. Erdogan has threatened to cancel the agreement altogether if EU refuses to grant Turkish citizens visa-free travel, while Europe has countered that Ankara needs to reform the Turkish anti-terrorism law first, as agreed.

The Turkish president hardly misses an opportunity to show that he couldn't care less about what Europeans think -- of his plan, for instance, to revoke the immunity of members of parliamentarians who refuse to toe the line, so that they can then be sidelined with the help of the judiciary. And now that Prime Minister Ahmet Davutoglu has been ousted, the EU has lost a level-headed dialog partner in Turkey. His successor, Transportation Minister Binali Yildirim, is seen as an Erdogan acolyte.

Ankara and Brussels are also at odds over another key element of the deal: the selection of those Syrians who will be allowed to resettle in the EU through the so-called 1:1 mechanism. The mechanism refers to the EU's intention to accept one Syrian directly from Turkey for each Syrian boat refugee that Ankara takes back from the Greek islands.

But the EU granted Turkey special rights in the selection process that are uncommon internationally. Normally, experts with the United Nations High Commission for Refugees (UNHCR) decide who qualifies for resettlement. This was the procedure used previously with refugee acceptance programs in Jordan and Lebanon. But the Erdogan government insisted that an agency within the Turkish Interior Ministry be allowed to make the first selection. Only then are the names sent to the UNHCR.

Officially, the UN agency notes that the expedited procedure is taking place "in coordination with Turkish authorities and the host countries." Unofficially, however, UNHCR employees report that they essentially rubber-stamp the lists that Turkey presents to them. They have no veto power, nor are they allowed to propose their own candidates. The host countries only come into play at the end when, after a security check, they can merely say yes or no to individual candidates. "The procedure is completely non-transparent," says a German official.

There is also a cynical aspect of the dispute. The EU countries had actually agreed with Turkey that the selection process should be balanced. Traumatized and sick migrants were to be allowed to travel, but also others, including those with family members already living in Europe.

But now, several European governments have been noticing a large number of hardship cases among the candidates for resettlement. In an internal EU meeting in Brussels at the end of April, the Luxembourg representative found fault with the candidate lists proposed by Turkey, saying that they are not balanced, "but instead contain either serious medical cases or refugees with very little education." Ole Schröder, the parliamentary secretary of state at the German Interior Ministry, recently reported similar concerns in a closed-door meeting of German parliament's Committee on Internal Affairs.

Several times in recent weeks, Turkish authorities suddenly withdrew previously issued exit permits at the last minute. Oddly enough, they were usually for families with fathers who were well-trained engineers, doctors or skilled workers. Officials from Berlin to The Hague to Luxembourg are familiar with such cases. Turkey has now officially informed the UNHCR that Syrian academics and their families are no longer permitted to leave the country by way of the 1:1 mechanism.

When the deal with Ankara was being negotiated, a few EU member states feared that precisely this scenario would materialize. In internal talks, Germany called for "limits of medical hardship cases," and Luxembourg noted that it would important to ensure that "the balance would have to be monitored." But European negotiators were unable to push through a fixed upper limit for hardship cases.

Fewer than 400 Syrians have been sent to Europe from Turkey to date. The fact that a dispute is already erupting over the selection of refugees does not bode well for the future. The original plan was that the EU would accept up to 72,000 Syrian refugees as part of the resettlement program.

But that would also require more European countries to agree to accept refugees. So far, however, only Germany and four other EU countries, out of a total of 28, are participating in the program. All others boycotted Merkel's deal with Erdogan. 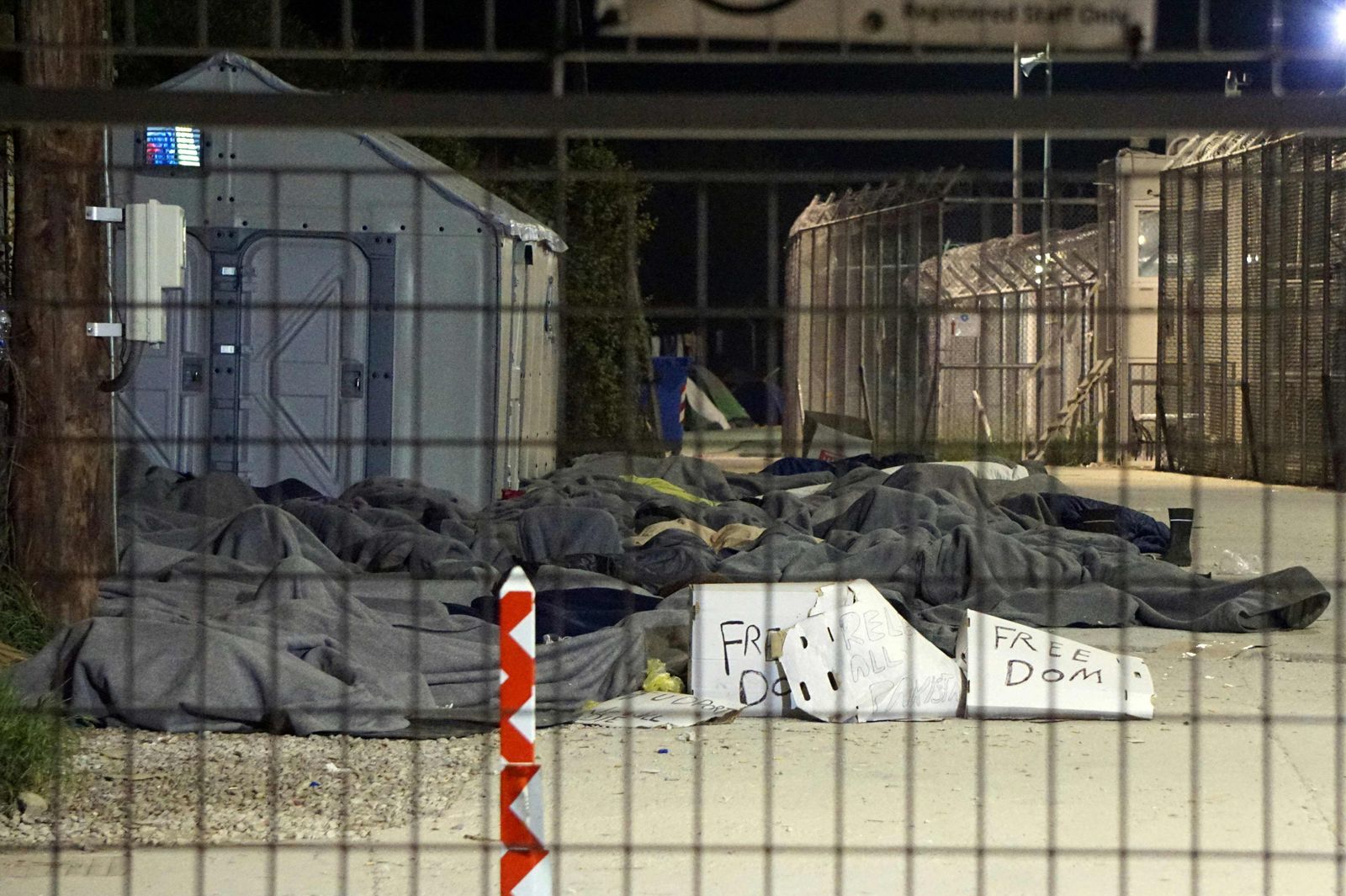 Migrants sleeping at the Moria camp on the Greek island of Lesbos. 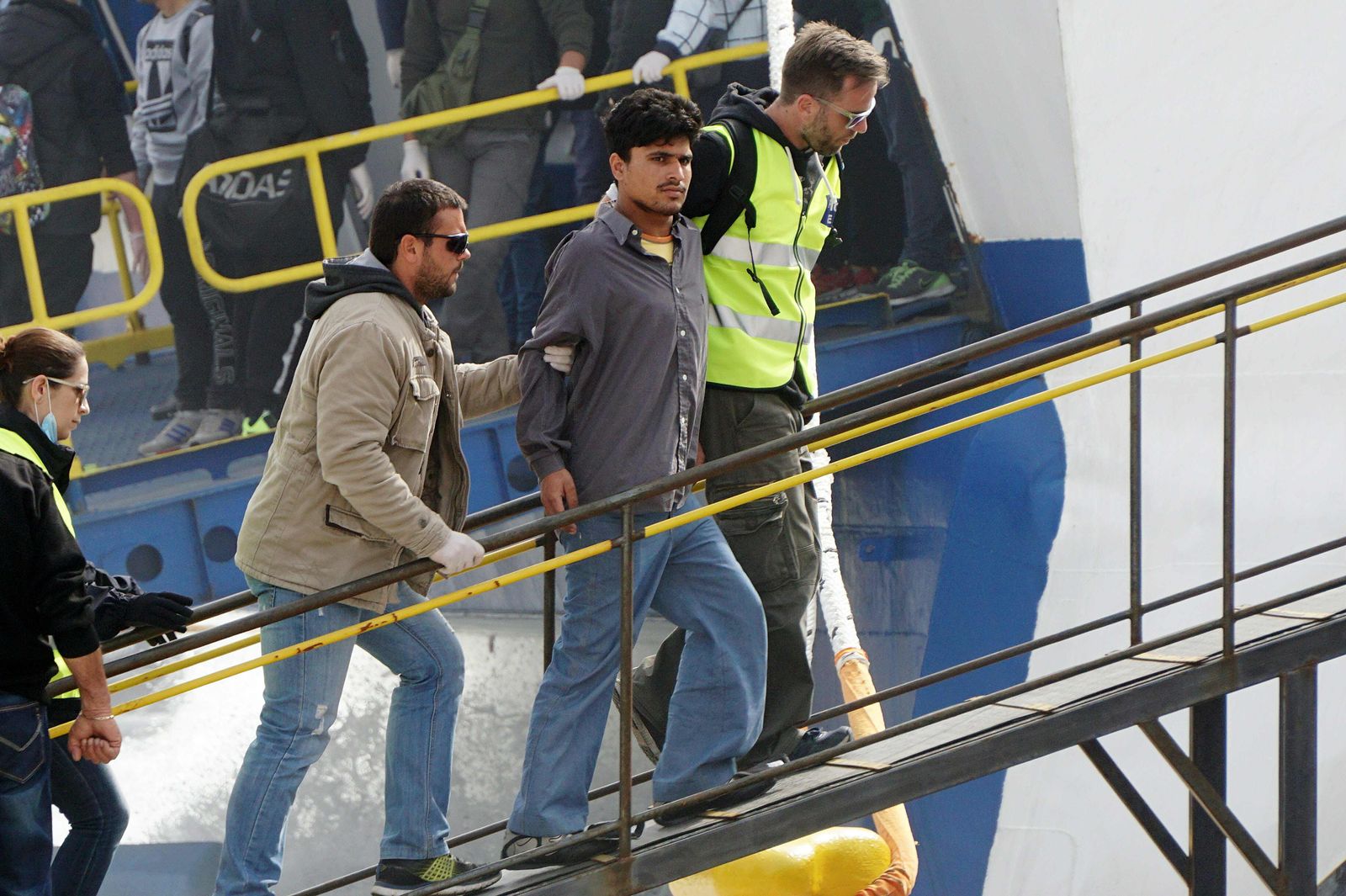 Frontex officials escort a migrant onto a boat heading back to Turkey from the Greek island of Lesbos.