The reaction was unusually firm for Merkel. She has become notorious in Germany for shying away from positions that can't be wriggled out of later. But when it comes to pooling the debt of all euro-zone member states in the form of euro bonds, she has long been firm in her rejection. In December 2010, for example, she said "the euro zone needs more harmony and competitiveness rather than common euro-zone bonds." In September, she called euro bonds "absolutely wrong." Wednesday's outburst, in other words, should not come as a surprise.

There are those, of course, who think that, in the end, Germany will have no choice but to put its own AAA credit rating on the line to ensure that other members of the European currency union have access to cash at reasonable rates. Borrowing rates for several euro-zone countries have risen alarmingly in recent weeks -- including yields for countries like France and Austria that had long been considered financially solid. Both Spain and Italy have seen borrowing rates spike to near or above 7 percent, the amount analysts consider to be the limit for sustainable long-term borrowing.

Indeed, on Thursday, media reports indicated that some within Merkel's governing coalition -- pairing her conservatives with the business-friendly Free Democratic Party (FDP) -- are no longer ruling out the introduction of euro bonds. "We never say never. We only say: No euro bonds under the existing conditions," Norbert Barthle, budgetary spokesperson for the conservatives in parliament, told the Financial Times Deutschland.

Merkel, though, would seem to have put a stop to such speculation on Thursday. Following a meeting with French President Nicolas Sarkozy and Italian Prime Minister Mario Monti in Strasbourg, she told reporters euro bonds "would weaken us all."

Germany has largely isolated itself in the ongoing European discussion over what steps should next be taken to confront the euro crisis. Governments across the Continent are clamoring for a solution. And analysts around the world have come to the conclusion that the spread of Europe's ongoing debt crisis can only be halted by implementing one -- or both -- of two methods: Either debt must be pooled in the form of euro bonds, or the European Central Bank must become the lender of last resort by buying up massive quantities of sovereign bonds from indebted euro-zone members.

Virtually all euro-zone members have thrown their support behind one of those two antidotes. Germany, though, has firmly opposed both. Berlin fears that massive ECB bond purchases could significantly drive up inflation (indeed, it evokes fears of 1920s hyperinflation in the country) and sacrifice the independence of the Frankfurt institution, which was modelled after the German central bank, the Bundesbank, that for decades served as guardian of the highly stable deutsche mark. And it's opposition to euro bonds? SPIEGEL ONLINE provides an overview of the most important reasons.

Backed into a Political Corner

Germans are tired of forking over cash to prevent heavily indebted euro-zone member states from going bankrupt. With the tabloid press, led by Bild, having spent the last 18 months portraying Greeks as lazy spendthrifts who only want to get their grubby hands on German taxpayer money, the aversion is not surprising. Indeed, in the run up to the October European Union summit at which euro-zone leaders agreed to enlarge the euro backstop fund, the European Financial Stability Facility (EFSF), Berlin went out of its way to promise that Germany, which provided €211 billion for the fund, would under no circumstances agree to increase its share.

Euro bonds, though, would essentially transform Germany -- and its solid, AAA credit rating -- into the strongest guarantor of collectivized euro-zone debt. And, should worse come to worst, German taxpayers would, once again, be forced to fork over. That, at least, would appear to be the widespread fear. A survey performed by Emnid in August found that fully 76 percent of Germans oppose euro bonds, with only 15 percent in favor.

Furthermore, Merkel isn't the only one who has made it abundantly clear that euro bonds are not high on Berlin's wish list. On Wednesday, Alexander Dobrindt, general secretary of the Christian Social Union (CSU) -- the Bavarian sister party to Merkel's Christian Democrats (CDU) -- blasted Barroso, telling Bild that the Commission president had "made himself the mercenary of Dolce Vita countries who want to get access to our tax money."

Merkel's junior coalition partner, the Free Democrats, are no less opposed. Party head Philipp Rösler on Thursday said clearly: "We don't want euro bonds." Several others in his party have been even more vehement in recent weeks.

Given the FDP's dismal poll ratings and the CSU's suddenly shaky support in Bavaria, neither party would appear to be in a position to easily reverse course. Indeed, it seems possible that the FDP may even prefer a collapse of the governing coalition in Berlin than yet another about-face on a key policy issue. Merkel's power, in other words, may depend on a firm "nein" to euro bonds.

The Best of the Bond World

Less than 2 percent. That was the interest rate being commanded by German 10-year government Bund bonds on Wednesday. Indeed, there are some analysts who would argue that Berlin's inability to find buyers for its entire bond issue was not necessarily an indication of growing wariness of euro-zone debt. Rather, it showed merely that, with such a low return, they simply weren't all that attractive.

That particular view of the situation was not widely shared, however. Most saw the shortfall as another sign that the euro-zone crisis is frightening investors off. And on Thursday, interest rates on German bonds shot upwards to 2.26 percent. "This is just one auction," Don Smith, an analyst with ICAP, told the Financial Times. "But there is a growing feeling among many in the markets that the crisis is heading one way -- and that is towards the break-up of the euro zone."

Still, Germany has to pay less for its debt than any other country in the euro zone -- and vastly less than the over 6 percent currently being demanded of Italy and Spain. It is a status quo Berlin would like to preserve.

By pooling euro-zone debt, however, euro bonds would likely make it more expensive for Germany to borrow. Some models under consideration would, of course, allow Germany to continue to issue its own sovereign bonds. But it seems certain that the interest rates on those bonds, too, would rise were the country to become a guarantor of pooled euro-zone debt. And with a debt load of over €2.2 trillion, representing 81.2 percent of the country's gross domestic product, a lasting increase in German bond yields would translate to billions more needed to service that debt.

In September, Germany's Constitutional Court handed down a landmark ruling on the country's participation in bailout efforts for Greece and for other heavily indebted euro-zone countries. While the court allowed Berlin to go ahead on its planned support for the European Financial Stability Facility (EFSF), it made it clear that any additional moves to aid fellow euro-zone member states would be viewed negatively.

Specifically, the ruling clearly indicated that Germany's constitution frowns on any permanent mechanism to transfer German taxpayer money to foreign countries in the form of a bailout. The larger such payments are, the larger the frown. The court also specifically warned against a situation whereby foreign governments could trigger payments of German guarantees through their actions.

The court's primary concern was the German parliament's constitutionally anchored control over the country's budget. There was concern that, given the speed with which some bailout packages have been assembled in recent months as the euro zone slides ever deeper into crisis, the parliament was being side-stepped. In response, parliament has since established a committee to quickly analyze and approve any large bailout payments made by the EFSF.

But euro bonds would be an entirely different case. Wolfgang Münchau, the Financial Times columnist who recently began writing editorials for SPIEGEL ONLINE, points out that they would be everything that the German Constitutional Court finds questionable about bailout programs thus far. They would have the potential to make Germany liable for debts incurred by other countries in the euro zone, the program would be huge (otherwise there would be no point in introducing them in the first place) and German guarantees could be triggered by the actions of foreign governments. "The court's verdict leaves me no alternative but to conclude that (euro bonds) are indeed unconstitutional," Münchau wrote in the Financial Times in September.

The Cart Before the Horse

Germany's popularity within the euro zone has not exactly risen as the currency crisis has continued. Berlin has been blamed from Athens to Lisbon for some of the most severe belt-tightening measures the Continent has ever seen. And many in Greece particularly have found fault with what they see as a patronizing attitude coming from Berlin and Brussels.

Merkel, though, remains convinced that euro-zone leaders must keep the pressure on in order to ensure that debt-laden countries institute the austerity programs necessary to begin bringing debt levels down. That, she never tires of intoning, is the only thing that will convince markets in the long term that the euro zone can survive.

As such, she prefers that European Union treaties be changed to allow for greater integration of euro-zone countries -- a position she repeated on Wednesday in response to Barroso's euro bond proposal and again on Thursday following the meeting with Sarkozy.

Specifically, she wants clear consequences to be anchored in the Lisbon Treaty should a euro-zone member state fall afoul of EU debt rules. "We have to take steps toward the creation of a fiscal union," Merkel said on Thursday in Strasbourg. Those that violate the EU's Stability and Growth Pact must "be taken to task." She and Sarkozy said that they would be presenting a proposal for possible amendments to the Lisbon Treaty in the coming days.

Only once such fiscal discipline is anchored in the EU's underlying treaty can a collectivization of euro-zone debt enter the discussion, Merkel insists. That, though, may not happen for some time to come. The last time a fundamental change was made to the fundamental treaties governing the EU, it took years before all 27 members granted their approval. 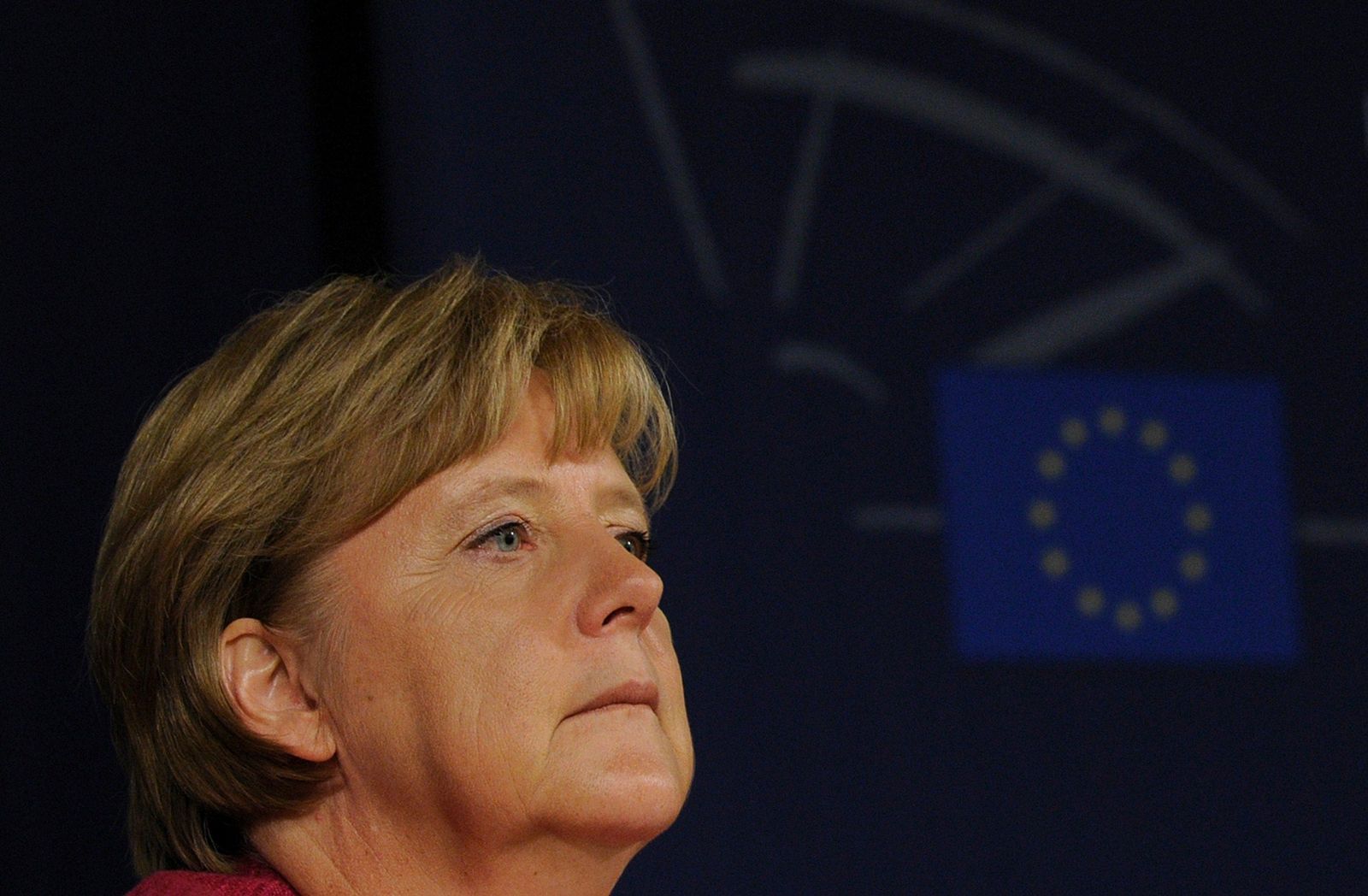