"The spirit of Europe is dying, the spring of the new era is in Germany." The quote sounds almost as though Chancellor Angela Merkel had just come home from Brussels and, after a few shots of schnapps, began waxing poetic about the current state of European politics.

In actuality, the quote came from German poet Friedrich Schlegel (1772-1829). He was not only an excellent translator but also prone to overwrought nationalism. Still the danger of conflating the two is disquieting. German nationalism was first sired 200 years ago. It is a dangerous beast that has brought about suffering and horror. We thought it had been eliminated, but it has once again emerged from the shadows in this major European crisis.

Is it a coincidence that a politician with Merkel's conservative Christian Democratic Union (CDU) blusters: "Now Europe is speaking German"? Or that newspapers in our neighbor countries feature caricatures of our chancellor with a Hitler moustache or wearing a Bismark-era military helmet. Or that a member of France's Socialist Party draws a comparison between Sarkozy's trip to Strasbourg to meet Merkel to that of former French Prime Minister Edouard Daladier with Hitler? At the time, the meeting was about sacrificing Czechoslovakia to Germany's eastward expansion. Today it is about all of Europe.

As Germans, we shouldn't be overly sensitive. We have to be prepared to tolerate a certain amount of Germanophobia. But this goes beyond that. Just two decades after German reunification, Europe has already reverted to its postwar stereotypes about Germany. From the German perspective, the worst possible scenario has come to pass: The Ugly German has returned.

This specter is fed by historical reflexes both in and outside of Germany -- the constant Nazi references abroad, and the Holocaust fatigue at home. It is sheer lunacy when conservative SPIEGEL ONLINE columnist Jan Fleischhauer writes here that the net payments made by Germany to the European Union are comparable to the reparations payments made after World War I. He has inflamed the pathology of history in the same way as the misguided and confused allegations made recently by the French Socialists. But at least the French have the excuse that they are currently in the middle of an election campaign.

Merkel Is a Dangerous Chancellor

In the mass-circulation tabloid Bild, journalist Nikolaus Blome wrote that Germany is "learning to lead," adding that: "It's about time, too." In saying that, he was noting how Germans are exceedingly anxious to finally throw off their postwar chains. There's a reason why the rhetoric has changed: It's taking its cue from political circumstances. In this crisis, the Germans have been insisting that their Continental partners should adopt Germany as their model. Germans haven't acted like that since the end of the war, preferring to listen closely and speak in soft voices. And that was the proper thing to do.

This tradition is yet another thing that Angela Merkel -- a radical politician, not a conservative one -- doesn't care much about. Indeed, this chancellor is dangerous. Her abrasive pro-austerity policies threaten everything that previous German governments had accomplished since World War II. And the new German realism -- which is idiosyncratic, cold and gaining traction among some media outlets -- supports her as she pursues this risky course.

But Merkel can't afford to assume the kind of iron stance that made Margaret Thatcher famous. Nor does it work for Germany to simply say: "I want my money back." That's not because of the two world wars. It's because of Germany's size and geographic position. There is literally no other country that has such a major interest in seeing a functioning European Union. Let me repeat: It's not about yesterday's guilt. It's about today's interests.

Joined in Failure or Alone in Defeat?

Charles De Gaulle's dictum about nations having "no friends, only interests" was valid for the world of the 19th century. But, in today's united Europe, these opposites have come together to form a new political reality: Friendship is in the mutual interest of EU states. It's about loyalty, responsibility and community. Freedom of the press in Hungary is something that concerns people in Germany now, as does the debt in Greece and political shenanigans in Italy.

In the same way, Germany's EU partners express concern about the country's internal divisions, about huge swaths of former East Germany having been left to anti-democratic and pro-neo-Nazi sentiments. They care when they see how the chasm between the haves and the have-nots in our society continues to widen.

Merkel must finally give some ground in Europe. She is a physicist, the following equation should be easy for her to understand. First, we don't know the best way out of the euro crisis. And there are in fact reasons for believing that this path involves having the European Central Bank do the things that Merkel is so adamantly opposed to. But no one can say for sure. Second, it may be better for Germany to join its partners in doing the wrong thing than to stand alone in insisting on what it sees as the correct course.

None of us can say for sure what's going to happen with the euro. But one thing is certain: If Merkel keeps acting as she hands, Germany may soon be surrounded by friends no longer.

Editor's note: Jakob Augstein writes the weekly political column, "When in Doubt, Think Left," for SPIEGEL ONLINE. The site also runs a weekly political column by prominent conservative writer Jan Fleischhauer called the "Schwarz Kanal," or black channel, a reference to the political color of Chancellor Merkel's conservative Christian Democrats. The views published here are those of the authors and do not necessarily reflect the opinion of DER SPIEGEL as a publication. 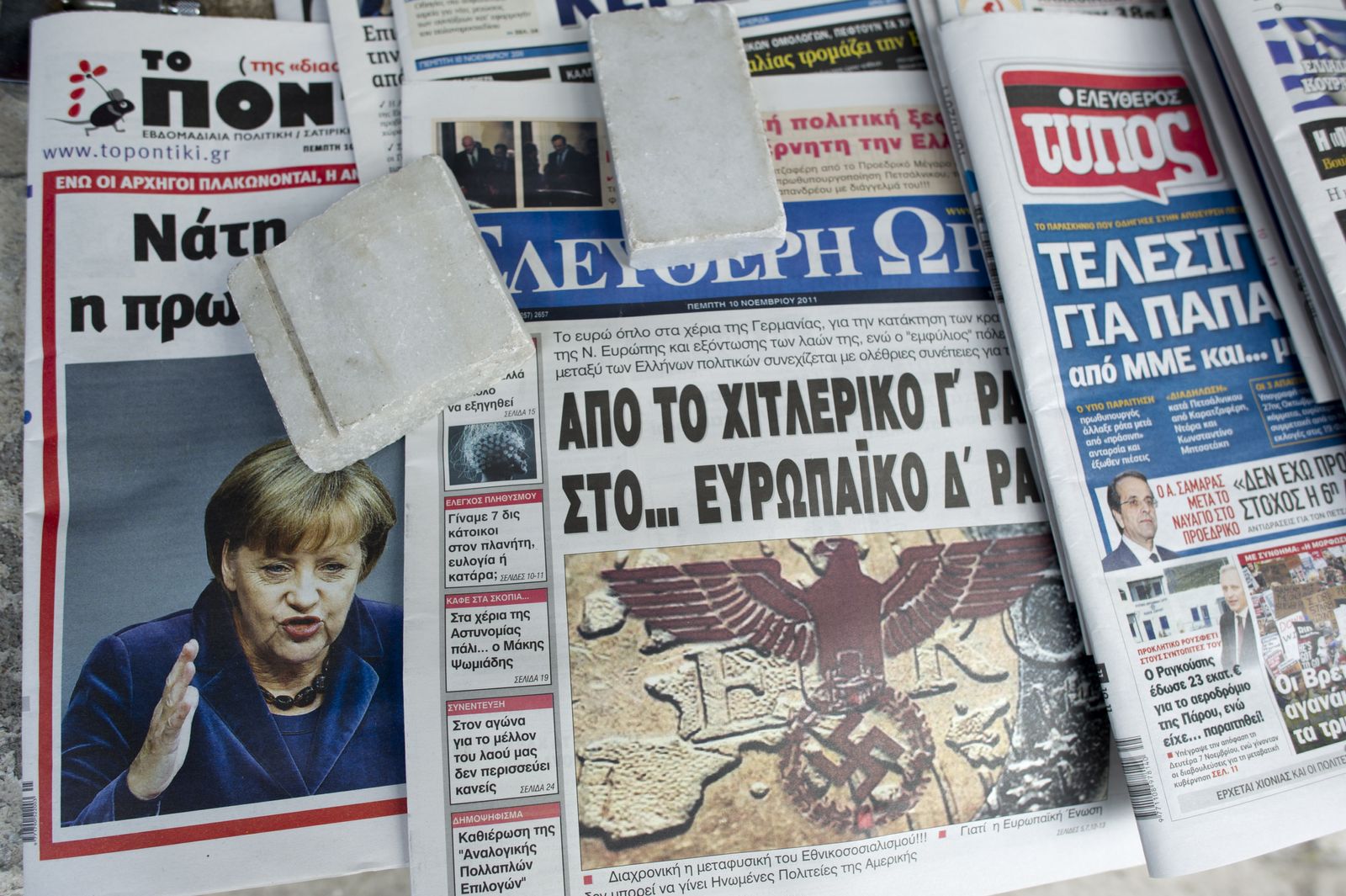 A Greek newspaper is shown on Thursday, Nov. 10, featuring the headline: "From Hitler's Third Reich to Europe's Fourth Reich"