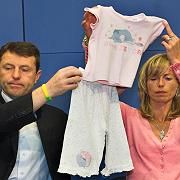 Gerry and Kate McCann appealed for information from German tourists at a news conference in Berlin last week.

First they appeared on Germany's main early morning TV show, then in a studio of the N24 news channel, and after that they were driven in a gray-blue Renault to the German government's press center in central Berlin. Now they are sitting here, in room 5/6, telling their story.

It's a story they have told countless times in recent weeks. It has appeared in the print and broadcast media hundreds of times and, as a result, the story has gradually ballooned in impact and importance. A few days ago Gerry and Kate McCann saw the pope in Rome, perhaps the most powerful ally of all for a Catholic couple from Rothley, a small town near the English city of Leicester.

Today, in Berlin, they have brought along a German-language missing poster and a small pair of pajamas. In room 5/6, normally a venue where cabinet ministers and secretaries of state explain the German government's policies to the media, Gerry McCann holds up the pajama pants to the cameras, like a piece of evidence.

Kate McCann holds up the short-sleeved pajama top. The pajamas are identical to the ones the McCann's daughter Madeleine was wearing on the night of her disappearance. The couple stands there for a moment, looking lost behind the enormous podium, facing a wall of photographers, reporters and cameras. A white-haired interpreter is sitting next to the McCanns, as is Clarence Mitchell, their press agent.

Mitchell tells the assembled reporters that anyone asking questions should bear in mind that Kate and Gerry are two completely ordinary people. But that's debatable. In fact, at this moment Kate and Gerry are probably the world's most famous parents. The McCanns.

They have done their utmost to ensure that the story of their daughter Madeleine doesn't die. They jet around the world in a private plane a British businessman has made available. They have the support of the pope, David Beckham, Joanne K. Rowling, Prince Charles and all of Britain. In fact, they have the whole world behind them. They are running the largest privately-organised hunt in history.

On the evening of May 3, the McCanns put their children -- two-year-old twins Sean and Amelie and their eldest daughter Madeleine, who was three at the time -- to bed in a two-room apartment on the mezzanine level of the "Ocean Club." The family was vacationing in Praia da Luz, a resort on Portugal's Algarve coast.

Gerry and Kate McCann waited until their children were asleep, and at about 8 p.m. they left the apartment to join friends at the resort's restaurant only about 150 feet away. Indeed, they were so close that they were able to watch the door of their apartment from the table. As the McCanns would later testify, they checked on the children every half hour.

At about 10 p.m., and in this respect their accounts are contradictory, Kate opened the door to the apartment to check on the children. Madeleine's sandals stood in front of her bed, and Cuddly Cat, the girl's stuffed animal, was on the bed next to the pillow. The twins were asleep. But the window was open and Madeleine was not in her bed. A few minutes later Gerry saw his wife running out of the apartment, screaming. 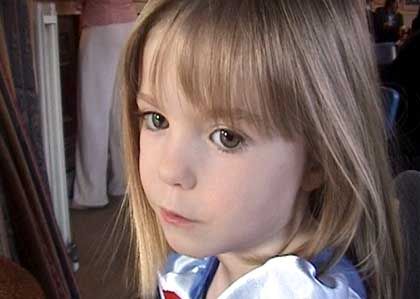 The incident happened more than five weeks ago, and the couple has been searching ever since. Speaking directly to the cameras, Gerry McCann, a 39-year-old physician, appeals to all German tourists who were in Praia da Luz during the two weeks before May 3 to look through their vacation photos. Maybe they show some unknown person in the background. McCann holds up a sign with an Internet address to which photos can be uploaded. Police experts, he says, will examine the photos for possible clues.

They are looking for a Mister X, and they believe he could have been captured by a tourist's camera.

There is already a suspect. Gerry McCann rattles off the description. A man was seen at the resort, he says, who looked about 35 to 40, was approximately 1.75 meters (5' 9") tall, had short black hair, and was wearing a jacket, beige trousers and dark shoes. An everyman.

Why are you searching in Germany? a reporter asks.

"According to the experts, the Algarve is especially popular among the Germans and the Dutch, next to the British," says McCann, speaking in a hard Scottish accent.

There has been criticism of your media campaign, someone says.

"Every step has been coordinated with the experts," says McCann. "You know, it's a good feeling to be able to do something. Just sitting around and waiting -- no one can endure that."

How much longer will you continue your search?

"I don't know. Weeks? Months? We don't want a long campaign. We pray that it will be over every day."

Do you think about the possibility that Madeleine could be dead? someone asks.

"We think it's more likely that she is alive," says McCann.

Do you blame yourself?

The press conference ends and they hurry off to their next meeting. A woman standing at the entrance hands Gerry McCann a note. "Information," she whispers. McCann thanks the woman and places the note into a binder -- the one containing all the other notes people hand him every day.

They climb into the blue-gray Renault, and Gerry McCann looks around, almost as if he were getting his bearings. The car takes them to the justice ministry. Later on they have an appointment with Klaus Wowereit, Berlin's mayor. It's a hot day in Berlin. They are more than 2,000 kilometers (1,243 miles) from the place where the whole thing began. But that ceased to be an issue long ago.

The McCanns, together with other vacationers and club employees, spent the night and the early morning hours of May 4 searching the resort. The police arrived and the search continued until morning, but unsuccessfully. The McCanns called friends at home in Britain, and the friends immediately began using their connections. One friend knew a news reader, and another lived on the same street as the brother of Gordon Brown, the future prime minister.

The story of Madeleine's disappearance quickly gathered momentum. Reporters and television crews traveled to Praia da Luz, and the Portuguese police, feeling the pressure, dispatched 150 officers to comb through the grounds and search wells and garbage cans. The owner of the resort provided the McCanns with a press agent, and as the media descended on the small community, the couple began giving interviews and press conferences. Friends put together a home page, which received 170 million hits in the coming weeks. Scotland Yard sent experts to Portugal, as the search for Madeleine McCann became a national affair -- and continued to grow.

David Beckham appealed for help in a TV commercial, as did Cristiano Ronaldo, the Portuguese star at Manchester United and a native of the country where Madeleine disappeared. A video of Madeleine was shown at half-time during the FA Cup final, and British cinemas will soon begin showing a short film about Madeleine before each movie. Prince Charles says that he prays for the McCanns, the pope grants them an audience and blesses a photo of Madeleine, companies like BP, McDonald's and Exxon display photos of Madeleine in their outlets, the McCanns give press conferences in Madrid and Seville, and celebrities like Virgin CEO Richard Branson and football star Wayne Rooney donate a reward of three million pounds for valuable information.

Joanne K. Rowling plans to have bookmarks with Madeleine's picture printed and included with the latest of her "Harry Potter" books.

British police are planning to display pictures of Madeleine in the Second Life virtual world. And the McCanns are also reported to be trying to convince search engine Google to display their daughter's eyes in the double Os in its name on its site. The couple told news agency AFP that Google had yet to respond to their request.

The McCanns stagger through Berlin as if possessed. He, straight-backed, wears a black jacket. She, thin and petite, wears a pink top and holds a worn stuffed animal in her hand: Cuddly Cat. They want to keep public interest in the case alive as long as possible. About 1,600 children and adolescents disappear in Germany every year, but there are no reliable figures for Britain. The numbers conceal silent fates and unknown folders in forgotten search files, the files that represent dead stories, cold cases.

Perhaps the McCanns were lucky, or perhaps their case contains all the requisite elements of a media event: a likeable professional couple, a pretty blonde girl, a club in Portugal, the ocean. No subsidized housing and no alcohol. The McCanns seemed made for the front pages, suitable to be turned into icons, people with whom one can identify. And everyone would do exactly what the McCanns have done -- if they had the means. Now it's become possible to follow the McCanns as they travel the world searching for their missing daughter. Two parents on the hunt for Mr. X.

Essentially there has been no news for weeks -- no new suspect and no new information. As the McCanns run from one appearance to the next, they are also running for themselves, running to reassure themselves that they are doing everything humanly possible.

It's afternoon and the McCanns are standing next to Mayor Klaus Wowereit in Berlin's Red City Hall. They have spent 15 minutes with the mayor, but what they discussed isn't entirely clear. Nor is it clear how the mayor of Berlin can help this couple. But the room is full of journalists, and that's all that counts at this juncture. Maddie's story must not die.

The McCanns are already in Amsterdam by evening. Their next stop is Morocco. A Norwegian tourist told them that she saw a man there with a blonde child wearing pajamas.