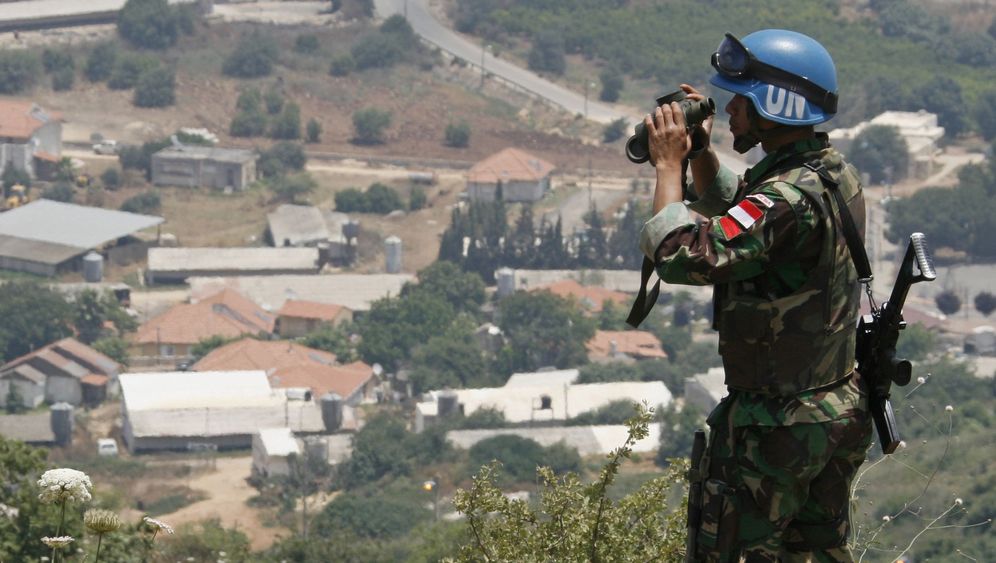 What has happened in Kiryat Shmona is nothing less than a miracle. At least that's what the mayor says, and the team manager, and the players and fans. And perhaps it's true that nothing less than a miracle could account for the local soccer team's advance from Israel's fourth league to its premier league -- here of all places, in this city on the eternal frontline that has been struck by thousands of missiles fired from Lebanon over the years.

Kiryat Shmona is a city with 24,000 residents, gray concrete buildings, high unemployment, five cafés, two shopping malls and not much else. It's a place people flee from if they can; if they stay, it means they've given up. It's a place that has bigger problems than soccer, and yet it is hoping soccer will be its salvation.

The city sits at Israel's far northern tip. One side of the stadium's stands looks out toward Lebanon, which lies just 3 kilometers (2 miles) away, behind the hills. The other side of the stadium faces Syria, 25 kilometers away. It's a life lived in the shadow of war, yet strangely unaffected by it.

Just over those borders, a civil war is raging and Hezbollah is arming itself. But, here, Hapoel Ironi Kiryat Shmona F.C. has become Israel's top soccer club, racking up a string of honors: Israeli champion in 2012, league cup winner in 2012, and qualification for the Europa League. This Thursday, the team will play Athletic Bilbao, one of last year's finalists.

A glance around this stadium helps one understand the long path the club has taken from the fringes of Europe to its center. The stadium has 5,500 seats, an annual ticket costs the equivalent of €4 ($5), the grass is bleached from the sun, and the old stand is crumbling concrete. If the players want to watch how their opponents play, they have to set up a large screen in the changing room.

A lawnmower takes a slalom course around the players. The roster includes a couple of Israeli Arabs, an Argentine, a Hungarian and a Serb, but most of the players come from Kiryat Shmona and the surrounding area. When they kick a ball over the fence, which happens constantly, a small child runs out to retrieve it.

Yossi Edri, 40, is standing at the side of the field. Edri was born in Kiryat Shmona and his father played for the club, as did Edri himself, mostly against kibbutz teams from the surrounding area. They always had a lot of fun, but little ambition. Now Edri is the team's sports director. He drives a flashy car and wears a silver ring bearing the words "Champion 2011-2012."

Edri's phone rings constantly -- he has to arrange visas, give interviews and communicate with the Union of European Football Associations (UEFA), which is headquartered in Switzerland. "Before there was no money, not even turf, no physical therapists, and the stadium had 1,000 seats," he says during a short break between phone conversations.

Things have changed since those days, and it's mostly thanks to one man: Izzy Sheratzky. Thirteen years ago, with missiles once again raining on Kiryat Shmona, Sheratzky, an entrepreneur who made his fortune with GPS tracking devices for cars, called the mayor to say he wanted to help Kiryat Shmona. The mayor replied that he should do something for soccer in the city.

So Sheratzky took over the city's two soccer clubs, merged them and named the new club Hapoel Ironi Kiryat Shmona, promising it would make the Israeli Premier League within four years and play in Europe within 10.

"We thought: He's nuts. What's he talking about?" says Yossi Edri. They viewed Sheratzky as megalomaniacal, politically suspect and crazy. After all, who buys a club that held 11th place in a country's fourth league, the nirvana of amateur soccer -- and promises to perform nothing less than a miracle with it?

In fact, probably only someone like Izzy Sheratzky, an Israeli equivalent to Dietmar Hopp, the German businessman whose support helped the soccer club 1899 Hoffenheim climb from Germany's fifth league to its top league. Sheratzky, 65, with his bulbous nose and round belly, doesn't look like someone rich but, rather, like someone who believes that success only comes through hard work -- and who once played himself and has loved soccer ever since.

It's a hot summer day and Sheratzky is standing on the field in the coastal city of Haifa because the stadium in Kiryat Shmona doesn't quite conform to UEFA safety standards. His team is about to play Neftchi Baku from Azerbaijan, and the fans are singing his team's anthem: "I never would have thought this day would come / A chill runs through my body / It's a dream coming true."

The Azerbaijani team is one of the hurdles Hapoel Ironi Kiryat Shmona faces on its way to qualifying to play in Europe, where it will face opponents with budgets many times higher than its own. Kiryat Shmona has an annual budget of €4 million, most of it paid by Sheratzky.

The businessman rocks back and forth on his feet as he attempts to explain how it all began. "In 1999, the situation in Kiryat Shmona was very bad. Missiles were raining down, so I decided to adopt the city," he says. "I was a little bit crazy." Sheratzky began to support the city, funding a soup kitchen, a language school and a nursing home. Each year, he gives Kiryat Shmona €200,000, making him the biggest private donor, and something of a shadow mayor at the same time.

At first, he says, he promised that Kiryat Shmona would one day be like Savyon, a town near Tel Aviv that is one of Israel's richest. But Kiryat Shmona's average monthly income remains stubbornly at around €1,000, over a third less than the national average, and worlds away from Savyon. Sheratzky shakes his head slightly and says: "We haven't gotten there yet." His younger brother Effi interjects: "You're a dreamer."

The soccer club, though, is at the focus of Sheratzky's development project. And since it's not just about the game here, but also about the city, there are a number of things that distinguish Kiryat Shmona from Germany's 1899 Hoffenheim. For one, Hapoel Ironi Kiryat Shmona hasn't been flooded with money. And it hasn't bought any star players.

Instead, Sheratzky established two rules. The first is that as many players as possible should come from Kiryat Shmona. To this end, he's invested in the city's youth and, as a result, three local players have even made it onto Israeli's national team.

The second rule is that residency is required. If players from elsewhere sign on, they have to come live in Kiryat Shmona.

That second condition isn't exactly an easy one, for who wants to live in a city where every resident has a gas mask and a bomb shelter at home? Still, a few players have come to this city without bars, clubs or restaurants, where the highpoint of the week is a Shabbat dinner with fans and teammates. Perhaps that's even part of the reason for Kiryat Shmona's success: the fact that it's hard to feel like a star here.

"Soccer is just a drop in the ocean, but it lets people forget their day-to-day problems," Sheratzky says. The team's games now draw 3,000 fans instead of 300, with whole families waving banners and expressing their joy over a win as quietly as they do their disappointment at a loss. When Kiryat Shmona became the Israeli champion this spring, there was no celebratory party in the streets. Even winning is something that takes some time to get used to.

This stands in stark contrast to the rest of the country, where soccer is a loud and aggressive sport, where fans engage in massive brawls, and where the cheer "War! War!" is one of the nicer ones.

Still, does soccer have the power to create more than just a good mood? Can it transform a city?

The day after the game against Azerbaijan, people walked around smiling, the team's manager says.

People left the city in the past, but now they stay, says the chair of the "Blue Lion" fan club, whose membership has grown from 10 to 1,000.

The first investor just paid a visit, the mayor announces with a spark of hope in his eyes.

"All nonsense," says a man in front of the building that houses the mayor ever since a missile hit the old city hall. The man is in a wheelchair. Hanging around him are signs saying: "Homeless for two years."

Change can be a question of perspective.

The Secrets to Success

Beni Ben Zaken, 29, a mid-fielder who was born in Kiryat Shmona and has been a professional soccer player nearly half his life, says he often wanted to leave in the past, but now he's proud to be from here. The most important thing for him, he says, was "that someone from a big city came and took us seriously and made us into a club that's as good as any other." The playing, he says, followed naturally.

Albert Menachem, a white-haired sports reporter in reading glasses, says: "It used to be that when Kiryat Shmona was in the news, it was because of missiles, unemployment or high debts. Now it's because of soccer." Menachem has reported on the team for the local newspaper for over 30 years, though his day job is repairing tractors. And suddenly he's in demand like never before, as everyone wants to know more about the club and the secret behind its success, the miracle.

It's certainly possible to explain a few things, the reporter says. There's Izzy Sheratzky and his millions, there are the motivated local players and the fact that individual ego counts less in Kiryat Shmona than the community does. The recipe for success is hidden somewhere in this combination of factors. But in all honesty, Menachem says, he still can't quite believe it.

Menachem doesn't just write about Hapoel Ironi Kiryat Shmona, he's also a typical fan. And today, at the stadium in Haifa, he's betting on a modest victory against the Azerbaijani team, 1-0.