These days the Swiss are in the grips of a strange fever that is making headlines in newspapers and on TV. Anyone visiting the country would have a hard time figuring out what all the excitement is about, however.

Of course, they'd easily work out that it has to do with an election, including a neck-and-neck race between a certain Karin Keller-Sutter and a Johann Schneider-Ammann -- and it concerns the question of whether there is really room in the government for five women, or two members who both come from the canton of Bern. But they still won't understand a thing.

When the Swiss parliament elects two new members of the government on Wednesday of this week, the event will go largely unnoticed in the rest of Europe. Switzerland is known as a referendum-obsessed country where the citizens have the final word on every important issue. But who actually governs it?

Nearly three years ago, the German news website stern.de ran a story with the headline: "Casanova Governs Switzerland." This was based on an Associated Press report, which stated that the new chancellor in Bern is Corina Casanova -- which was correct. The only problem is that the chancellor in Switzerland is not the equivalent of German Chancellor Angela Merkel, but merely the government's chief of staff.

The Swiss don't see such basic ignorance as an insult, but merely accept it as a fact of life. Historian Urs Altermatt, the country's most well-known expert on the Swiss system of government, says that he has given up trying to explain to people abroad exactly how the system works in detail.

Sitting in the historic district of the city of Solothurn on a sunny September day, Altermatt can hardly get a word in edgewise as he is interrupted by total strangers who want to talk about the chances of their favorite candidates for the government. It's as if Altermatt were a famous sports commentator and the topic was soccer. But the game here is one that only the Swiss comprehend.

This is roughly what it's about: Two of the seven seats on the Federal Council -- the Swiss government -- are up for re-election. That will presumably have no impact on the country's political orientation, but the individuals who take these positions in the government will remain there for many years, usually until they decide to resign. For the Swiss, it's almost as if a soap opera were being recast with new main characters.

The Swiss government also vaguely resembles a left-wing commune that is deeply committed to consensus decision-making. It has seven equal members, known as the federal councilors, who collectively govern the country. There are currently three women and four men. Each federal councilor is in charge of an executive department, and all seven vote on all decisions. There is no boss. The office of president, which one of them assumes each year, is a ceremonial position. The Federal Council is basically a collective head of state -- a president divided by seven, if you will.

Switzerland is a country whose constitution is designed to prevent concentrations of power. There are many rules when choosing new members in the Federal Council. All of the country's regions must be represented, the sexes need to be in the right proportion and, if possible, there should be members from all the country's three main linguistic communities (German, French and Italian). There also has to be proportional representation of all parties because, in a consensus democracy, all leading political powers govern together. There have been differences of opinion, however, among Swiss parties concerning the correct proportion ever since the right-wing populist Christoph Blocher of the Swiss People's Party (SVP) was elected to the Federal Council in 2003 and not re-elected four years later.

This year, it's actually up to the liberal Free Democrats (FDP) and the center-left Social Democrats (SP) to replace their outgoing representatives. This means that Karin Keller-Sutter and Johann Schneider-Ammann from the FDP and Simonetta Sommaruga and Jacqueline Fehr from the SP, as well as a representative of the SVP, are vying for the support of members of parliament, in hearings and backroom meetings. Every day the media announce who is currently in the lead. It's a wonderful ritual, and yet there has rarely been so much dissatisfaction with the system of government as there has been recently.

In the last few years, the Swiss have experienced crises such as the abduction of two of its citizens in Libya and international attacks on its banking secrecy laws. There has been harsh criticism of the government and its failure to stand up to Libyan leader Moammar Gadhafi and the European Union. The federal councilors have been accused of dilettantism. The consensus-based system no longer functions as it used to, because Switzerland is now highly polarized in a right-wing and a center-left camp. The political atmosphere is sometimes toxic nowadays.

The Incredible Stability of the Swiss System

Federal Councilor Moritz Leuenberger, a member of the Social Democrats, has often been asked who actually governs Switzerland. Can he also answer the question? "Of course," he says, speaking in his office in Bern. "The voters do. According to the constitution, they are the supreme power, and this also holds true in a political sense." Leuenberger knows from first-hand experience that it's not the government that has the last word in Switzerland, but rather the citizens who vote in referendums.

Leuenberger has been on the Federal Council for 15 years as head of the Department of Environment, Transport, Energy and Communications. He once calculated how many of his ministerial counterparts from the neighboring countries of Germany, France, Italy and Austria he has dealt with during his time as a department head. The total came to 115. Now he and his colleague, Hans-Rudolf Merz from the Department of Finance, are leaving the government. It's their successors who will be elected this week.

Leuenberger's long term of office is a prime example of the incredible stability of the Swiss system. He may be largely unknown outside of European political circles, but some of the greatest transportation projects in Europe were realized during his tenure, including the new Gotthard Base Tunnel, the longest railway tunnel in the world. Next month the breakthrough -- when the tunnels from either side meet -- will be celebrated. Switzerland plans to move most heavy goods traffic by rail, and it has introduced tolls on trucks and invested billions in public transport. The country's citizens have given their blessing to each of these steps.

Whenever anyone expresses doubts that it's possible to have continuity of government under the Swiss system of direct democracy, Leuenberger likes to point out that the new rail link through the Swiss Alps will soon be finished, unlike similar projects in other countries, such as the Brenner Base Tunnel between Austria and Italy which according to Leuenberger is a "long way" from completion.

"When it comes to transportation policy, for example, we see that voters have made decisions for decades on highly detailed issues and have always remained true to a sustainable policy of moving traffic from the highways to the rails," says Leuenberger. He adds that, in contrast to other countries, referendums in Switzerland don't serve as a means for people to protest and let off steam. Granted, the citizens voted a year ago to ban the construction of minarets, but this is "the only known example," he says.

Leuenberger is a staunch advocate of the Swiss system in which all parties work together to find solutions. He says that it is no coincidence that he, as a Social Democrat, has been able to liberalize former state-owned companies in the postal, telecommunications and railway sectors. As a center-left politician, he is able to persuade the trade unions not to call for a referendum.

No Need for Radical Change

Nevertheless, it wasn't easy for Leuenberger to be stuck with his greatest political rival, Christoph Blocher, in the government for four years. It was also difficult for him to publicly defend banking secrecy as a member of the government, even though he had personally always opposed protecting foreign tax evaders. "Governing places great demands on the individual, including mentally," says Leuenberger. He doesn't think much of across-the-board criticism of the system. An organization that is poorly managed doesn't need new statutes, he says, but rather someone new at the helm.

Today there are people who are pushing for five or nine federal councilors instead of the current seven. There is also a proposal to extend the term of office of the powerless federal president from one to two years. Leuenberger doesn't think this is a good idea. "If we're going to make a change," he says, "why not have a federal president for four or five years who doesn't have to head his own department and is perhaps even elected by the people? He would of course have to be trilingual, a symbol of integration for the entire country." He couldn't imagine, however, that a majority would support such an idea.

After all, Switzerland is simply not designed for revolutions. 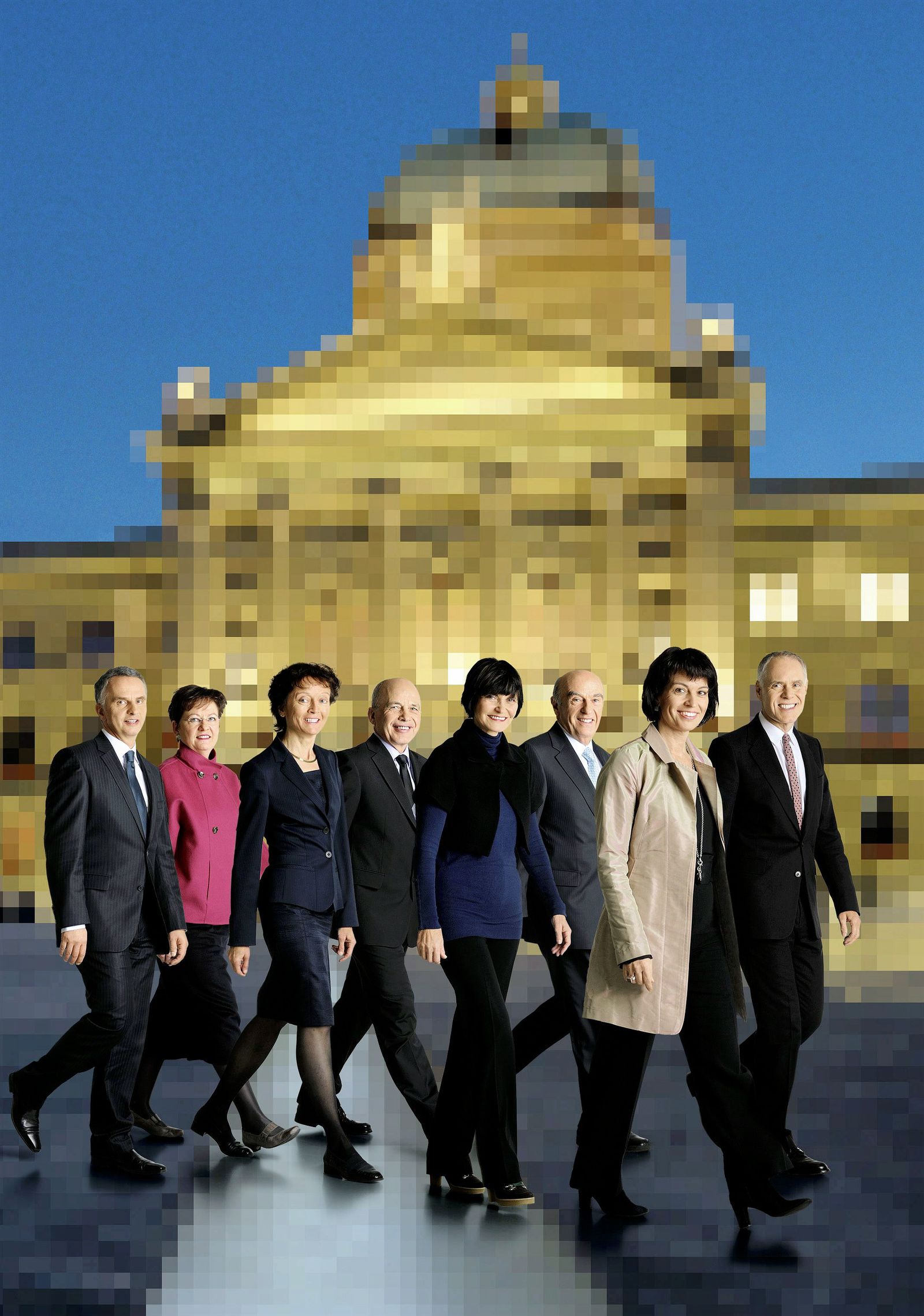