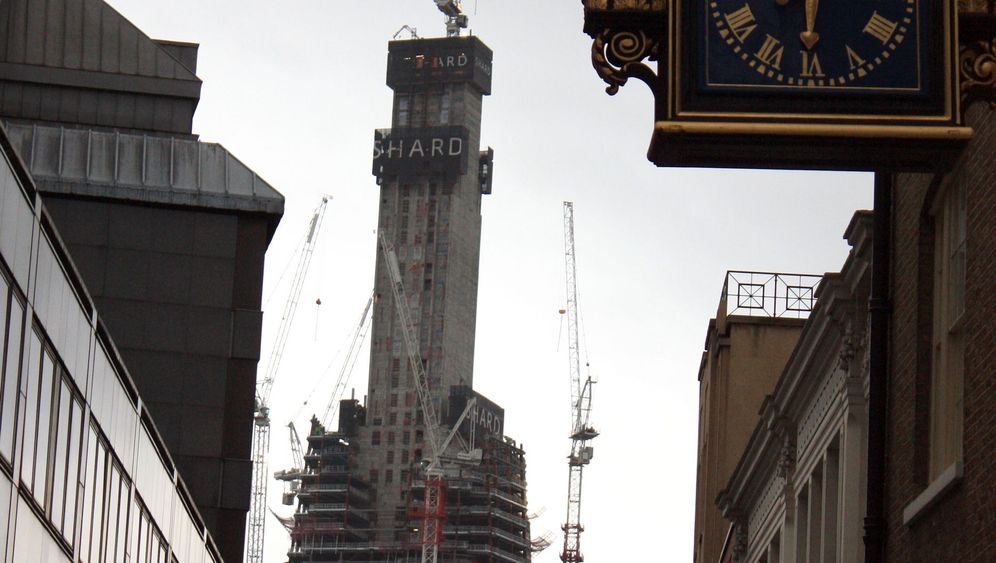 Viewed from the building's 57th floor, London spreads out like a miniature wonderland. The medieval Tower of London, across the River Thames, looks like a child's toy castle. Buckingham Palace, lying behind it, appears no bigger than a dollhouse.

Once completed, this building will have a total of 72 floors. Including the enormous spire at the top, it will stand 310 meters (1,017 feet) high. Even in its unfinished state, it's the tallest building in Western Europe, jutting toward the sky like a glass wedge with sharp contours. The building is certainly no beauty, and its silhouette seems confident, almost arrogant. Even its name sounds aggressive: the Shard.

London already boasts a few tall buildings, the most famous being Lord Norman Foster's so-called "Gherkin," a 180-meter-tall (590-foot-tall) building primarily housing offices of the global reinsurance company Swiss Re that got its nickname from its elliptical form. But even the Gherkin looks like a Lego toy when compared to the Shard. Indeed, the Shard -- essentially London's first genuine skyscraper, has broken a taboo. It's the first building to alter the city's character, one that shrinks the old Roman city of London down to a picturesque stage set.

Irvine Sellar likes it that way. Sitting on the building's 15th floor, where parquet flooring and carpeting are already installed, he points out the view over London. "From here," he says, "you can look out on more than a thousand years of history." Sellar is a real estate developer and the man behind the tower that makes everything else in this city of 8 million -- the history, the architecture and, or course, the people -- appear small and insignificant. Sellar says his skyscraper will change London -- and not just for today or tomorrow, "but for centuries."

Even his dark suit doesn't make the 72-year-old Sellar look excessively distinguished. His hairstyle looks a bit like a perm and could be something straight out of the 1970s, when Sellar was the king of Carnaby Street, making his fortune with a chain of clothing stores. Having turned to real estate since then, he has enjoyed varying degrees of success.

Still, there's no question about his audacity. While many construction projects ground to a halt in the wake of the 2008 financial crisis, Sellar was just getting started, drawing his investors from Qatar.

In fact, not even the current financial situation -- with a teetering Greece, a seemingly unsolvable euro crisis and an uncertain global economy -- worries Sellar, who will even go so far as to say: "We're living in paradise." In 2012, London will host the Summer Olympics, and Queen Elizabeth II will celebrate her diamond jubilee, marking 60 years of her reign. For Sellars, 2012 means "6 billion people looking at London and at us" -- in other words, a perfect year to market his tower.

Sellar is convinced his building will become London's most important landmark. It was designed by Italian architect Renzo Piano, another elderly man with no shortage of self-confidence. But the 74-year-old Piano has something Sellar doesn't: an aura of sophistication and global fame. Incidentally, Piano finds "the Shard" a poetic name.

It's not that there aren't taller buildings elsewhere. For example, Dubai has its Burj Khalifa skyrocketing a record 828 meters (2,717 feet), and there are even plans to build a structure climbing 1,000 meters (3,280 feet) in Saudi Arabia. But London offers heights of another sort, drawing wealthy Russians and the well-to-do from the Middle and Far East. And Sellar believes these people see London as "the most exciting city on the planet."

His Shard will offer space for offices, restaurants, 10 apartments and a luxury hotel, whose selling points include a pool on the 52nd floor with a panoramic view. Floors 68 to 72 will house an observatory, which Sellar believes will attract visitors to the building.

Of course, there is certainly no shortage of potential visitors in the area. Sellar is building his skyscraper at something of a transportation hub, as it is wedged in next to the London Bridge railway station, which is used by 54 million people each year.

Sellar is also building a second high-rise next door, though this one will only have a modest 17 floors. Total investment in the projects is £1.5 billion pounds (€1.8 billion or $2.3 billion). So far, the only tenant to sign a lease has been the Asian hotel and resort group Shangri-La, which will operate a five-star hotel on several floors of the Shard. Sellar cancelled a contract with another interested party, the Greater London Authority, the body administering regional transit. He was apparently hoping to draw other, higher-paying tenants.

A Symbol of London 's Excesses

Every skyscraper serves as a symbol. This glass tower is meant to show that London can defy the financial crisis, or at least that's how London Mayor Boris Johnson phrased it a year ago. In the worst-case scenario, the glass wedge will simply become a symbol of the fact that everything in London is growing fancier and more expensive, and that it's time for old England, with its eroding working class, to abandon the city and its exorbitant costs of living. In fact, these costs are precisely what prompted thousands to take to the streets in protests last summer.

Sellar shakes his curly head. Of course, he sees the matter differently. Together, his two high-rises should provide working space for over 12,000. "We're taking people off the streets," he says.

Sellar has been working on the project since the late 1990s; Piano, the architect, joined him on the project at around the turn of the millennium. Piano first made a name for himself by co-designing Paris' Pompidou Center. While working on the London skyscraper, he also designed one nearly as tall for the New York Times in Manhattan. He has also designed airports and the master plan for Potsdamer Platz, the commercial and entertainment hub in Berlin.

Racing into the Sky

For years, people in London took little interest in architecture, and it seemed like anyone could build whatever they liked. Sellar and Piano came up with their idea before the 9/11 attacks made many scared of skyscrapers, before the financial markets began to stagger and long before angry young people in Britain turned to arson. Indeed, the concept for the Shard concept was born in an entirely different era. In terms of atmosphere and aesthetics, the building is still living somewhere around the year 2000.

Still, the Shard isn't the type of kitschy construction now seen in cities from Moscow to Shanghai. It is sculptural, but not sentimental. Of course, its windows reflect the passing clouds, which fits with Piano's concept of poetry. But on the many days with dismal weather, the building's glass panes will simply mirror the gray London sky.

Yet nothing -- whether architectural lyricism or Sellar's commentary -- can hide the fact that, at its heart, the building represents a display of power. Now more than ever, tall buildings serve as status symbols for European cities. No one seems to seriously care anymore about preserving historic building or paying attention to lines of sight or the relative heights of buildings.

After almost 40 years, Paris has also decided to allow high-rises again, at least at the edge of the city's downtown area, where the Swiss architectural firm Herzog & de Meuron has received permission to build a 180-meter-high (590-foot-high) pyramid. In Switzerland, Basel is getting its own skyscraper, while Zurich has the Prime Tower at 126 meters (413 feet) and is considering building something akin to a high-rise-ringed Central Park just outside the city. Meanwhile, in Barcelona, French architect Jean Nouvel is building one of Spain's tallest buildings, a 142-meter (466-foot) structure meant to evoke a fountain.

But London has outdone them all. Its recently completed Heron Tower, on the other side of the Thames, stands at 202 meters (663 feet), and the Shard makes the leap to over 300 meters.

Architecture critics such as Andres Lepik say skyscrapers built solely for the sake of height are completely outdated dinosaurs. People used to marvel at them the way they do when the see a flashy car on the street. But cities grow, and if they don't want to continually expand into the surrounding countryside, they're forced to expand upward instead. But, all too often, these tall buildings look almost completely out of place owing to their location, their size and even their appearance.

When asked how it feels to alter the skyline of a metropolis like London, Piano notes that if an architect makes a mistake, people will see it for a long, long time.

Sellar, on the other hand, takes a more relaxed view. No one else will be able to top him in London -- at least as long as no one is allowed to build a structure above 1,000 feet (305 meters). Or course, Sellar has found a way to get around this restriction himself. By putting the base of the Shard in a depression, it will technically be 1,016-feet tall.