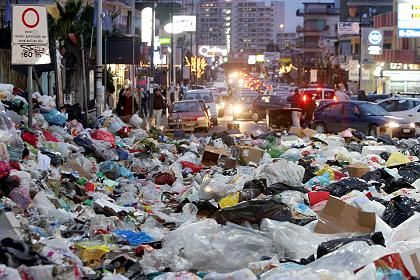 Garbage in Naples has been piling up for weeks.

These days, one of the quietest and most peaceful places in the city of Naples is the Office of Waste Separation at the Palazzo Genzano Fondi, where the special commissioners for "garbage emergencies" are based. There are six desks, stacks of files and piles of never-used garbage can stickers. The six desks probably correspond to six positions recorded in the office's books, but on this morning not one of them is occupied. Meanwhile, somewhere in the world outside, piles of garbage are waiting to be taken away.

"Garbage? Did you see any piles of garbage in front of my office? Well, then," says Antonio Valiante, vice president of the Campania region, in his office at the Palazzo Onorevole only a few blocks away. "You will only find garbage on the streets in western Naples, on the outskirts. Who goes there, anyway? Salerno, the Amalfi Coast, Pompeii -- it's clean over there." This is a leading local politician's answer to a foreigner's incredulous question as to why there are about 100,000 tons of uncollected garbage lying around in Naples, tarnishing one of Italy's most beautiful landscapes.

Valiante is no right-winger. In fact, he serves under Antonio Bassolino, a former communist who has been the region's president for many years. Valiante is a man who favors balance, a southern Italian politician who is far too experienced to allow daily incidents to ruffle his feathers. "Am I responsible? Naturally, everyone who holds political office in this area is responsible," he says, but is quick to add: "But so are residents. Everyone must develop a sensitivity for separating garbage."

The residents of Quarto, a Naples suburb, would probably like to agree with Valiante and his sensitivity to their situation -- if they didn't have completely different worries. The mayor of Quarto demanded that the police clear a "humanitarian corridor" to the town, where food supplies are running low, after opponents of a garbage dump to be reopened there blocked access routes for several days with cement blocks, construction vehicles and tree trunks.

In the past week, the municipalities surrounding the Pianura garbage dump have seen next to no government presence. Rioters controlled the area, the crater of an extinct volcano, until last Wednesday. There were checkpoints and burning piles of tires, while residents had to deal with young men armed with sticks, their faces covered.

When the dump was closed in 1996, after having been used for more than 40 years, residents were promised that the site would be converted into a golf course. The fact that garbage trucks are back, instead of golf carts, hasn't exactly boosted residents' confidence in their local politicians. "We did our part. We pay taxes, and we too are Europeans," says Patrizia, a 50-year-old hotel worker, who is thin and smokes. "I'm tired of wasting away," she adds. She's talking about the garbage, the hooligans, the politicians, the stench, the Camorra -- in short, life.

Meanwhile, three masked protestors are hacking away at a tall pine tree they hope to turn into a barricade. Finally the tree -- the only attractive one far and wide -- crashes to the ground.

No one can remember ever having experienced this form of urban guerilla activity in Naples before. The violence that has erupted around the city is reminiscent of the Paris riots, complete with burning buses, demolished fire trucks and street fighters on motorcycle patrols, using walkie-talkies to coordinate their movements. Weapons, say residents, are apparently also circulating.

It is said that the hooligans were deployed by the local mafia, which controls waste collection in the city and has the most to gain from the crisis. One thing is certain, and that is that there are enough young men in suburbs who take every opportunity to challenge the state, be it in football stadiums, on tax returns or in front of the garbage dump. "We are not the Camorra / But you are our ulcers!" one of their signs reads.

Meanwhile, the garbage is spreading -- by 1,100 tons a day in Naples alone. Since the dumps have been filled to capacity, garbage is no longer being picked up in the suburbs, where it litters the streets in the form of rotting piles shredded by traffic, dogs and rats.

Waste disposal fees are higher in Naples than elsewhere in Italy. Nevertheless, in the past few decades regional officials have come up with no better idea than to fill their craters, basalt caves, quarries and low-lying areas with garbage. In 1994, the region was ordered to clean up all unregulated garbage dumps and develop a waste disposal program that includes garbage separation and recycling. Fourteen years and close to €2 billion later, none of the region's three waste incinerators is operational and the garbage separation rate is one of the lowest in the country. Closed dumps are being reopened, and yet the region -- with the exception of Pompeii and the office of Vice President Valiante -- is full of trash. There are 2,500 illegal garbage dumps in the Caserta district alone.

Guido Bertolaso, one of the current special commissioner's predecessors, came up with a plan to address the problem, but the Green environment minister opposed it and the plan never materialized. After successfully managing operations in war-torn Cambodia and during the 2004 Indian Ocean tsunami, Bertolaso was defeated in Naples.

The city's administration has proved to be incompetent, if not unwilling. Municipalities awarded expensive waste disposal contracts to consortiums, which in turn farmed out the work to subcontractors that were as inexpensive as they were shady. No one paid attention and no one threatened to impose any fines.

The millions seeped away, just like the industrial toxins, sewage sludge and paint disposed of by subcontractors of subcontractors in Campania. In a wiretapped conversation in 2003, a member of an illegal garbage disposal unit said: "The garbage grows into pure gold in our hands." For the Camorra, the waste disposal business is less risky and, presumably, more profitable than the drug business.

A 'State of Emergency' Drags On

But neither the Camorra nor some southern mentality is to blame for the crisis. According to Guido Viale, an environmental economist, politicians are at fault for "underestimating the problems, for their political lack of responsibility and for getting involved with the Camorra."

Leftists are in power in Campania and Naples. Bassoni, the former mayor and now the regional president, was once seen as the man who could lead a Naples renaissance. He was a modern type of communist, as elegant as he was charismatic. But his popularity has waned, and today his name is listed at the top of the protestors' banners -- as the first of the politicians they insist should be fired. Mario Martone, a Neapolitan filmmaker, has suggested that the politicians in office should publicly break out the garbage bags and begin sorting -- as a gesture of repentance. 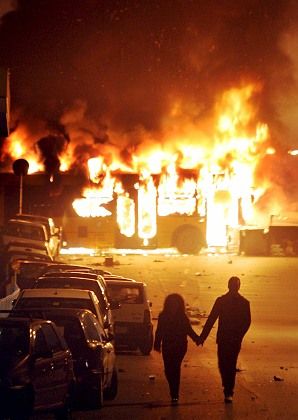 Protesters set a bus on fire during the clashes between police and demonstrators in Pianura, near Naples.

Naples, as it happens, is a city of excessive, melodramatic gestures. Nothing is meant quite the way it's said, but this time residents seem to have had enough. "A community that is sinking into and suffocating in its own excrements," writes author Michele Serra. "It's difficult to imagine a more disturbing allegory, worthy of a Dante in its reproachful force."

Money earmarked to handle the region's growing garbage crisis was used for other crises. There are 25 white garbage trucks owned by the city of Naples parked on a lot on Via Virginia Woolf, in the city's refinery district. This is where Pasquale Romano and his 360 fellow workers of Bacino Napoli 5 work. "Our job is to separate garbage. But not one of these vehicles works. Each of them is missing one part or another," says Romano, 48. He and his crew sit around, smoking and playing cards. They're paid to spend six hours a day here "on call" -- and they've been doing it for the past seven years.

According to an outraged Romano, 2,300 of these idle garbage men are employed throughout the region. The group is coordinated by a company called T.E.R.G.A., or "Consulting and Outsourcing Services," on behalf of the waste disposal commissioner. T.E.R.G.A.'s slogan is "Effectiveness - Efficiency - Profitability."

A parliamentary report concluded that the special commissioner's office has proven to be an "ineffective and harmful illusion," and that its main purpose is to provide for the welfare of itself and its employees.

The "state of emergency," which has lasted for the past 14 years, keeps an entire industry of shipping and storage companies, consultants, institutions, inspectors and waste disposal companies afloat. When there is a state of emergency, money flows more easily and less attention is paid to laws.

For example, in Terzigno, a town in the Mt. Vesuvius National Park, the Camorra used a cave for garbage disposal for several years. The government eventually seized and closed the site. But now Terzigno is slated to be reopened -- legally, this time -- as a temporary dump.

The government in Rome fears that the problems in Naples will adversely affect the entire country's image, and could also lead to the cancellation of European Union subsidies. In June, the European Commission in Brussels even wrote the city a warning letter, in which Eva Kaluzynska, the Commission's Spokesperson for Regional Policy, noted: "The Commission is following developments in the situation in Campania with great interest."

Prime Minister Romano Prodi has made local officials' failures in Campania a top priority, thereby linking his political survival to the garbage issue. Prodi gave former national police chief Gianni De Gennaro 120 days to find a solution to the waste crisis. At least four waste dumps are to be reopened and three incinerators are to be built.

As police chief, De Gennaro was successful in hunting down members of the Mafia and of the Red Brigades, an Italian terrorist group. He was also responsible for the police's brutal tactics during the G-8 summit in Genoa in 2001.

Prodi also appealed to other regions to show solidarity, asking each region to take some of Campania's waste. Lombardy and Venice, both proud northern regions, have already given Prodi their polite refusals, suggesting that Naples take care of its own waste management problems.

An incinerator scheduled to be built in Acerra, the only one in the region, has been under construction for the past 10 years. The delays have been caused by lawsuits, protests and outrageous incompetence and sloppiness on the part of the plant's operators. Acerra will begin operations this year -- if a new operator can be found.

Campania's garbage will likely be sticking around for some time to come. In Ponticelli, a poor Naples neighborhood where the refinery, a flea market and a garbage transfer station are located, trucks have been lined up since last week. They are waiting to take the city's garbage to the freight depot, where it will be loaded onto trains and taken across the Alps to places like Leipzig and Bremerhaven in Germany. According to Italian newspapers, German incinerator operations are paid €130-170 per ton of waste.

"I am optimistic," says Antonio Valiante, vice president of Campania. The new commissioner, he says, has more power than his predecessors, money is flowing once again, and it is "only a matter of hours" before the dump in Pianura will reopen. Valiante insists that once shouldn't always be so pessimistic, and that Naples remains a wonderful city. "Just look at that view," says Valiante, pointing to the window in his office. The view encompasses the Gulf of Naples, sailboats bobbing on a glittering expanse of water and the Mole, with the double peak of Mt. Vesuvius towering in the background. It's said that an explosion is long overdue.