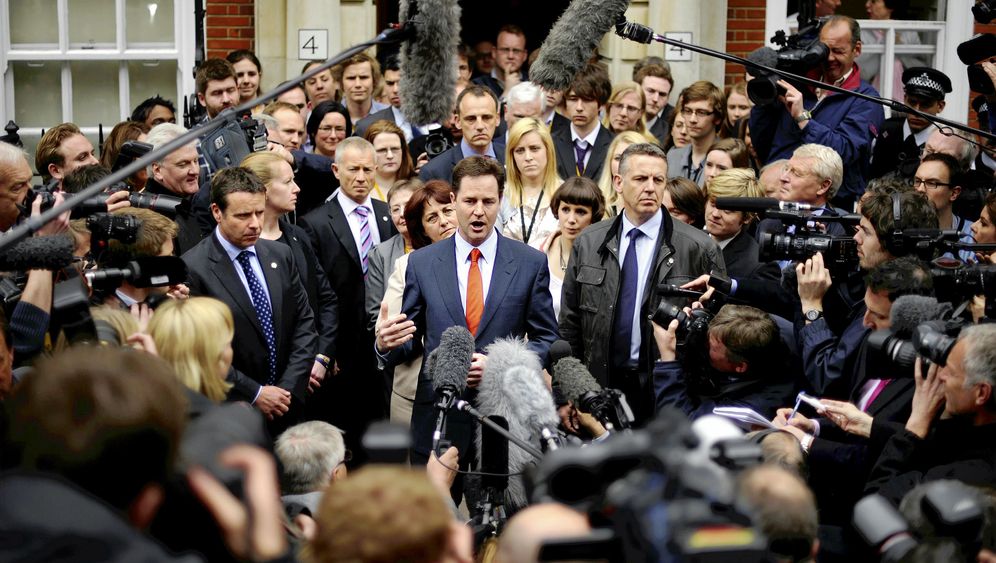 When the British go to the polls, strange things can happen. In Liverpool, for example, polling places ran out of ballot papers during last Thursday's general election. In parts of London, Sheffield, Manchester and Birmingham, thousands of would-be voters had to stand in line for hours only to be turned away as unyielding election volunteers locked the doors of polling stations before they had a chance to cast their ballots.

A number of angry voters even had to be dispersed by police shortly thereafter. It was not the finest hour for what the British like to claim is the world's oldest democracy.

The current British electoral system stems mainly from the Victorian age and, just like the country's plumbing, the London Underground or the facilities in London's large housing projects, it appears to be in need of extensive renovation.

It is also high time for change. After a slew of expense scandals over the past few months, many British voters had already lost trust in their parliamentary representatives -- and last Thursday's election gaffes have only reinforced their cynicism.

Falling Short of a Majority

The election results were also disappointing. Only one small party emerged as a clear winner. In the seaside resort of Brighton, the Greens received more votes than all of their rivals, winning -- decades after their colleagues on the European continent -- their first and only seat in parliament. "Tonight the people of Brighton have made history," said the delighted new MP, Caroline Lucas, who is also leader of the Green Party.

The established Westminster parties have made history themselves: as losers. Prime Minister Gordon Brown has lost 91 seats in parliament. The British clearly want him out of office.

But they are not exactly clamoring for David Cameron, either. The Tory candidate was prematurely confident of victory during the campaign but still fell short of the mark, winning 36 percent of the votes nationwide. That is, admittedly, more than what Tony Blair received in the 2005 election. But the unpredictable British electoral system has deprived him of a majority of seats in parliament.

Even the star of the election campaign, Nick Clegg of the Liberal Democrats, took a beating, despite predictions from opinion pollsters and the media that he would receive an enormous increase in votes. He won nearly a quarter of the votes, but thanks to the UK's bizarre first-past-the-post system, his party doesn't even have 9 percent of the seats in parliament -- five seats fewer than before.

Just as many election pundits had feared, on Thursday the British produced a perfect example of a hung parliament. No party leader is in a position to mobilize the 326 votes needed for a majority in the lower house of parliament, the House of Commons.

This is both a rare and dreaded event. For the first time since 1974, there is utter confusion over the question of who can govern the country. That party or parties will need to come to terms with a completely new political landscape and, at the same time, overcome the crisis of confidence over the British parliamentary system. The new government also faces the challenge of reducing the country's huge budget deficit, which the Labour government accumulated in the wake of the financial crisis.

Although the voters have spoken, what they have said is virtually unintelligible. Caught between the initial political horse-trading and the sheer fear of a looming financial crisis that seemed to worsen by the hour, Brown, Cameron and Clegg experienced probably the toughest moments of their careers on Friday. During the afternoon, it became very quiet in London as the players disappeared into the backrooms. That evening Clegg and Cameron's lieutenants met for their first secret negotiations.

Queen Elizabeth II was prepared for the crisis. Normally she receives the new prime minister in the early morning hours, just as she has done since Winston Churchill was elected. It is customary for the election winner to perform an age-old ritual in Buckingham Palace. He or she kneels down and swears allegiance to the monarch. Then the queen invites the winner to form a new government. Around noon, the new prime minister's moving van arrives at Downing Street, and the new cabinet is selected by that evening.

The queen and her advisers had realized for weeks that things probably wouldn't work out that way this time. The previous day, she let it be known that she would under no circumstances be receiving political visitors before one o'clock in the afternoon. She had hoped -- in vain, as it turned out -- that the parties would reach an agreement by then. Just to be on the safe side, constitutional experts prepared the British for what would happen first: The unpopular Prime Minister Brown will remain in office -- as long as no one else has secured the backing of a majority.

This has put Clegg in the role of kingmaker. Will Britain be led by a Conservative minority government, tolerated by the Liberal Democrats? Or could both parties join forces to form a coalition government, even if the Brits consider such party alliances to be moribund contrivances right from the start? Or will Labour manage to hang on in office after all, forming what one veteran Tory politician dubbed "a coalition of losers" together with the Liberal Democrats and a few Scottish Nationalists, with current Foreign Minister David Miliband as the new prime minister?

'Bear with Us a Little Bit Longer'

On Monday, there was still no sign of a solution to the predicament. Clegg asked the British people to "bear with us a little bit longer" as his party entered a third day of negotiations with the Conservatives. "I don't think a period of prolonged uncertainty is a good thing," he told reporters. The two parties held six hours of negotiations on Sunday, and Clegg had met separately with Cameron and Brown. There was speculation that the Lib Dems and the Tories might reach a deal on Monday, with members of the Conservative negotiating team reporting that things were going well.

If he really wants to, Clegg could transform the muddled election results into a veritable historical event, should he insist on electoral reform in exchange for his support of the next prime minister. If he succeeds in pushing through this agenda, it would probably spell the end of the British two-party system. This would mark the beginning of a new political era in the UK -- one which would bring the country a step closer to the political norm of coalition governments in Europe.

Under the current system, each of the 650 electoral districts sends a representative to Westminster. The candidate with the highest number of votes in each district is elected, even if he or she only receives 30 percent of the ballots. Votes for the remaining candidates are ignored. The party with the most seats appoints the prime minister.

This system usually ensures a clear majority in parliament. The price for that is systematic discrimination against small parties, which leads to a democratic deficit that is unacceptable for many British. The system regularly ignores the will of up to two-thirds of the electorate.

'Our Electoral System Is Broken'

In addition to shutting out the small parties, it allows the final result to be decided by a limited number of voters outside the districts that are considered secure party strongholds. A few hundred thousand swing voters in the roughly 100 most hotly contested constituencies determine who will be the British prime minister.

Is that democratic? Hardly. "Our democracy itself can sometimes find it impossible adequately to reflect the contradictions contained in the voice of the British people," wrote BBC commentator Mark Easton in a blog post on Friday. Clegg, who stands to benefit most from possible electoral reform, put it more simply: "Our electoral system is broken."

His party has been pushing for reform for decades, without success. Now it has a chance to see its key demand become reality. Brown's Labour Party would be willing to make such a change. The Conservatives are hesitating over concessions that could lead to proportional representation. They are afraid that such reforms might cut them off from power for generations.

There's not much time left for the parties. The financial markets are pushing for clarity and for solutions that would provide a prospect for overcoming the monstrous budget deficit. On Friday, the stock market fell amid uncertainties over the next government. If the political crisis continues too long, experts fear the pound may tumble. "The days ahead are moments of high decision for the Liberal Democrats and for the future of the state and the country," writes columnist Will Hutton on The Guardian's website.

On Friday evening, there appeared to be a mood of resignation in the British capital. Standing in front of his official residence, Brown conceded that his successful challenger Cameron had the right to be the first to try to build a new government.

According to the unwritten British constitution, Brown didn't have to do this, but he certainly wasn't prepared to push his luck with Britain's disgruntled electorate by entering into coalition negotiations on the heels of such a devastating defeat. It was as if a small change of government had already taken place.

London's European partners in Berlin, Brussels and Paris would hardly welcome such a changeover, however. "The extent to which Britain's Tories and Europe's leaders don't understand each other is frightening," wrote The Economist recently.

German Chancellor Angela Merkel has a genuine distaste for the slick Tory leader. "The personal relationship between the two," says a member of the German government, "will be at least as difficult as with (French President) Nicholas Sarkozy." During her most recent visit to London, Merkel, who is the leader of Germany's conservative Christian Democrats, conspicuously avoided meeting Cameron.

The Tories are not the least bit interested in European integration. Cameron has promised his supporters that he will take back a number of national competences from the EU. Although the party leader wants to avoid at all costs entering into an open conflict with political partners on the continent, many of the new Conservative members of parliament openly despise the EU, and Cameron now has to offer them something. A significant minority of the Tories would prefer to withdraw entirely from the EU.

London betting offices aren't giving a Cameron government much odds of staying in power for long, assuming he succeeds in moving into Downing Street. In 1974, after the last hung parliament, the new minority government only lasted a few months before the British had to return to the polls.