Things are still going well for Thorsten Harke for the time being -- surprisingly well. The businessman in the western German city of Mülheim exports chemical and pharmaceutical products to the United Kingdom: pills, cosmetics, disinfectant. Because such products currently in high demand internationally, the gross revenues taken in by his group of companies went up by about 25 percent in the first half of this year.

Trade in the UK makes up a large part of that total, Harke says, because many market segments are "experiencing an exceptional boom because of corona."

The situation, though, could change quickly. If British Prime Minister Boris Johnson doesn't soon sign a wide-ranging trade deal with the European Union, Harke's 165 employees will soon be a lot less productive than they are now.

That is because the UK would be treated as an outsider, not unlike India or Egypt are treated today. Harke's companies would face longer transportation times, contracts would have to be changed and new regulations - concerning imports or product approvals, for example - would have to be honored. All that would drive up costs even as new tariffs would eat into profit margins. Should Brexit not be accompanied by a trade deal between Britain and the EU, Harke says, his profits would drop by "several percent" and "make some operations unprofitable."

Europe has twice been able to avoid the catastrophic scenario of a no-deal Brexit. Existing single-market rules were simply extended and cross-Channel trade continued as before.

This time, though, it doesn't look like common sense will prevail. Johnson has ruled out another extension of the transition period and both sides will theoretically need to agree on a wide-ranging trade agreement in the next few months. Normally such a process takes years.

Large, complicated, delicate issues are at stake: the jurisdiction of the European Court of Justice; future collaboration on foreign and security policies; and what has seemed to be the most controversial question thus far: How much cod may Danish and French fishermen harvest from British waters. London and Brussels should have been on their way to a compromise long ago, but instead, they are further apart than ever. If nothing changes, cross-Channel trade will collapse at the end of the year, and growth will slow. In the UK alone, long-term growth could fall by around 7 percent, according to official estimates. This slump would come on top of the deepest recession since the end of World War II. It would be a "double dip," another hard blow for the economy.

This would make Europe of all places - which once created the global blueprint for free-trade zones with its single market - a cautionary tale for globalization and nationalism. The United Kingdom would decouple itself from its most important trading partner, and the EU would find itself establishing new barriers with the Continent's second-largest economy. Johnson's Brexiteers like to describe their post-Brexit country as a "global Britain," but in practice, it would be stuck alone outside fortress Europe.

When Johnson signed the exit treaty with the EU last fall, he made far-reaching concessions to the bloc on the most controversial issue. The Political Declaration stated that Britain would uphold "the common high standards applicable at the end of the transition period in the areas of state aid, competition, social and employment standards, environment, climate change and relevant tax matters." Europeans saw this as a signal that Johnson was no longer considering pursuing a so-called "dumping" plan, in which he would institute lower wages and laxer laws to compete with the EU.

Now, Johnson is once again taking a hard line, as he made clear in a video conference with European Commission President Ursula von der Leyen last Monday. Although he did not explicitly withdraw his promise, he did repeatedly mention the election manifesto with which he won the vote for the British House of Commons last December, in which he promised a "true Brexit."

"Johnson is distancing himself from the joint declaration," says Bernd Lange, a German MEP with the center-left Social Democrats (SPD) who has been involved in the talks as head of the International Trade Committee. "They no longer want what was agreed upon." EU diplomats in Brussels are also dismayed after a disappointing round of negotiations with their London counterparts in early June. "Progress was in line with the - low - expectations," said one confidential report sent from Germany's EU representation to the Chancellery and ministries in Berlin. It stated that "significant breakthroughs were not achieved." This was apparently especially true when it came to the issues of competition and fisheries.

Johnson apparently wants to pick up where he started. At the end of last year, after his landslide victory over the Labour Party, he temporarily portrayed himself as the sympathetic Conservative, as a leader trying to steer the deeply divided country toward a pragmatic exit. Now, he is once again positioning himself as a Brexit ideologue for whom slogans matter more than political substance.

In mid-May, for instance, the UK's Department for International Trade sent out a celebratory note to British citizens. From January 1 of next year, it stated, the government would exempt 60 percent of foreign trade from all import duties. Goods worth some 30 billion pounds would suddenly become cheaper, including dishwashers, refrigerators and even Christmas trees, cheaper.

What the government didn't mention was that if London and Brussels don't agree on a new deal, UK residents will need to pay a lot more for other goods. In accordance with World Trade Organization rules, a 10 percent tariff would be applied to German cars, along with a 40 percent toll on French cheese. Champagne, prosciutto, tomatoes and countless everyday items would become more expensive. Consumers would have to buy an entire forest of Christmas trees to compensate for the extra costs.

And that would only be part of the price of a no-deal Brexit. Is Boris Johnson willing to pay it?

If the prime minister's rhetoric is anything to go by, it seems like he is. In a February keynote speech, he mused that the world needed a country willing to rush into a phone booth like Superman, take off its glasses, and re-emerge with its "cloak flowing" to fight for global free trade. Close ties with the EU, he argued, stand in the way of this goal, making a no-deal outcome more palatable. He said he had "no doubt that Britain will prosper."

Since then, Superboris has had to fight COVID-19, and his government's management of the crisis has left little time for Brexit, and certainly not for suggestions that it would compromise with the EU.

On the contrary: Johnson's chief negotiator, David Frost, has repeatedly strained the goodwill of the EU with his scattered provocations, and Conservative hardliners have argued in tweets that the UK's departure from the EU was not meant purely for the Brits, but that it was also about inspiring other countries to follow suit.

Many in the UK believe the hardline position isn't just rhetoric, but that it is calculated. In the eyes of some Brexiteers - who make up the majority of Johnson's cabinet - the pandemic could be a unique opportunity to gamble on a no-deal outcome, which is now being referred to less dramatically as the "Australian model."

They could attempt to hide the inevitable dislocations spurred by Brexit behind the much more dramatic devastation caused by the pandemic. From Johnson's perspective, the trick could be tempting, though high-risk.

After all, a no-deal outcome wouldn't just make cars and cheese more expensive. It would disproportionately affect the industrial regions in the Midlands and the North of England, where a majority of voters backed the Conservatives for the first time in the December elections. Johnson swore to those people that he would end their decades of economic decline.

But entire industrial sectors there depend on smooth trade with the EU. The Tees Valley alone is home to 1,400 chemical companies that ship more than 13 billion euros worth of goods annually, mostly to the EU. Of the 168,000 people directly working in the automobile industry, almost 100,000 work in the regions that supported Johnson. Without cheap and predictable deliveries, local aviation and food industries would also face problems.

The British economy is already groaning under the effects of the pandemic. Even though global supply chains have remained intact and trucks at the border in Dover have been processed as quickly as ever, the country lost 20 percent of its output in April alone.

That would change under a no-deal Brexit. Tim Bale, deputy director of the think tank UK in a Changing Europe, believes it is a "fantasy" to want to hide Brexit amid the COVID-19 chaos. "Once we see supply chains disrupted and prices going up, people will realize this has nothing to do with the coronavirus."

"Once we see supply chains disrupted and prices going up, people will realize this has nothing to do with the coronavirus.“

Tim Bale, deputy director of UK in a Changing Europe

Johnson's vision of a deregulated post-Brexit UK is also mostly hot air. His supporters have breathlessly claimed in the last few months that the UK will be able to pick up the slack left behind by a sluggish EU.

But if you ask Johnson's ministers what regulations they intend to weaken, you tend to be met with bashful silence. "Britain is a highly regulated economy, you can't just quickly lower norms," says Sam Lowe, a trade expert at the Centre for European Reform, a London-based think tank.

Johnson doesn't even have enough support within his own ranks for the trade agreement with the U.S., which he would like to use to pressure the EU. Some oppose U.S. proposals to open up the British National Health Service to private American insurance companies. Others support the domestic farmers, who are opposed to U.S.-produced chlorinated chicken and hormone-treated meat. Since leaving, London has signed deals with over 20 countries and trading blocs - all based on current EU regulations.

The British economy is now openly rebelling against Johnson's apparent plan. Carolyn Fairbairn, the head of the Confederation of British Industry, argues that, given the recession triggered by the coronavirus, companies in the country have "no more reserves" to deal with a "no-deal Brexit at the end of the year." She adds: "The resilience is exhausted."

And time is running out. It's seen as unlikely that Johnson will agree to a last-minute compromise as he did in fall of 2019, when an exit agreement was already in place. Today, there is not a single sentence on which both sides fundamentally agree.

The idea of producing a paper of several hundred pages at a dramatically staged EU summit in October is completely unrealistic, especially because the treaty would then need to be translated into all official EU languages and ratified by the European Parliament.

As a result, Gabriel Felbermayr, the president of the Kiel Institute for the World Economy, sees only one chance for a halfway tolerable outcome: the EU must rely on a mini-treaty for trade in goods, which could be supplemented in the next few years with further agreements on services and data protection. "Great Britain is the largest European economy after Germany," the economist says. "For this reason, the EU should accommodate the British and grant them concessions, for example on the free movement of workers." Felbermayr adds: "No deal would be the worst outcome for everyone." 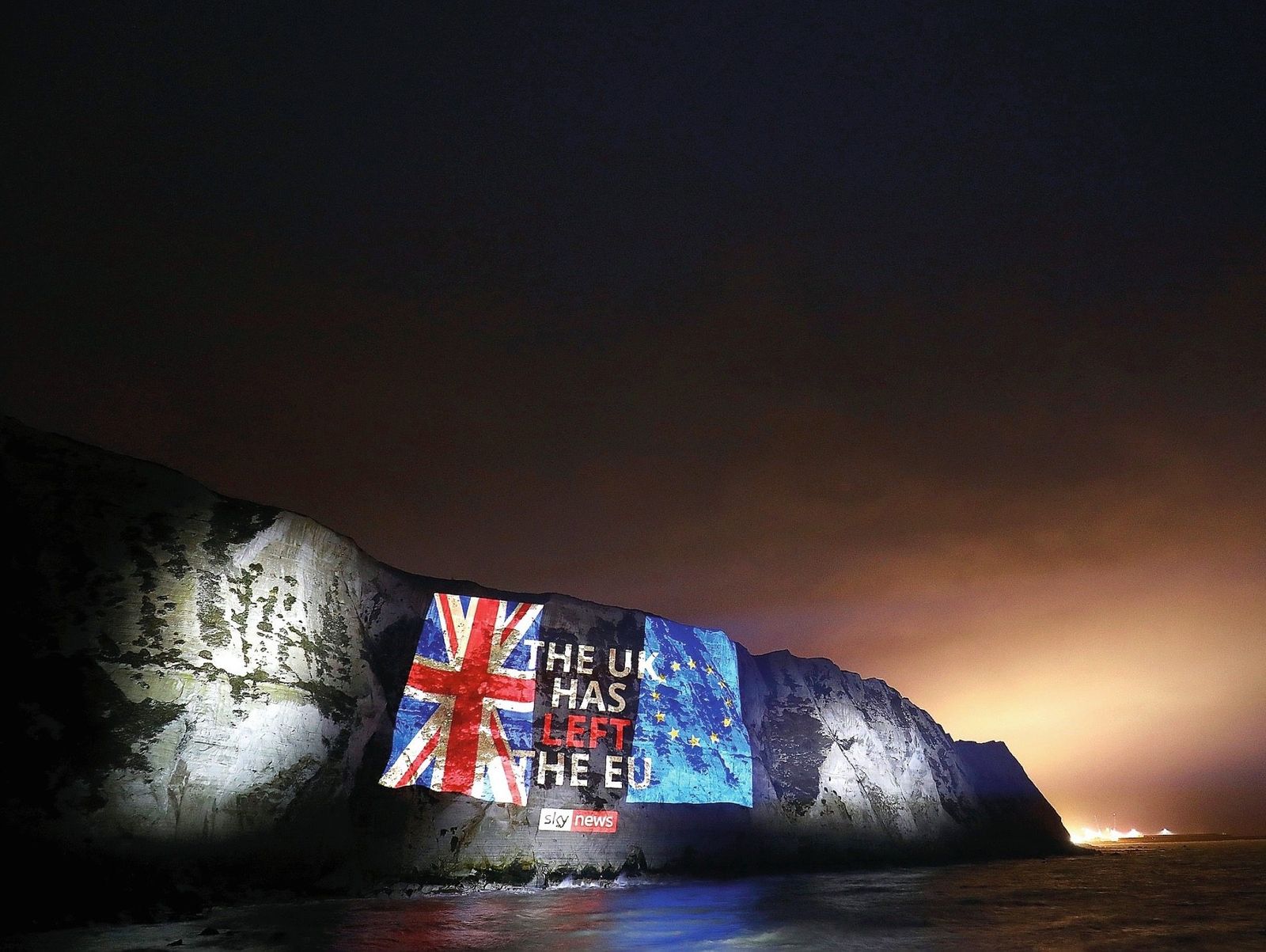 A projection on the White Cliffs of Dover on Jan. 31 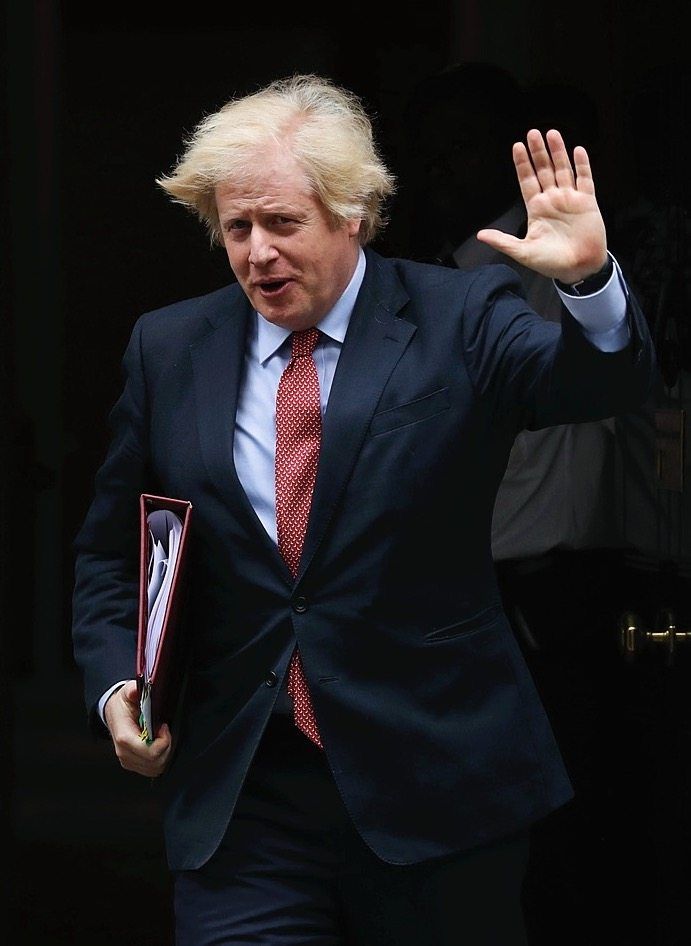