The man who brought the war to eastern Ukraine speaks in a cool and composed manner. His moustache and ramrod-straight posture are both reminiscent of an officer from the Czarist military as he holds court in his office located in a former industrial park in the south of Moscow.

His passport bears the name Igor Girkin, but all of Russia knows him under his nom de guerre Strelkov, which roughly translates to "marksman." And even though he is seen in the West as a terrifying figure, Strelkov, born in 1970, has recently become something of a hero to the Russian right wing. He is among those powers who believe that Putin is not acting decisively enough in eastern Ukraine -- and who have a deep hatred for opposition activists such as the recently murdered Boris Nemtsov.

Strelkov's office floor is covered with expensive parquet and he sits behind a large, dark-wood desk. "I dream of a Russia in its natural borders," he says. "At least those of 1939." He claims to have been the one who convinced Putin to intervene militarily in Ukraine, at a time, he says, when the Kremlin was still debating the proper approach to the country.

"I was the one who pulled the trigger for war," Strelkov boasts. In our conversation, he compares himself to the Bosnian-Serb nationalist Gavrilo Princip, whose assassination of Austria's heir to the throne Archduke Franz Ferdinand in 1914 set off World War I.

Early last week, the trailer for a documentary film made waves in Russia because it showed Russian President Vladimir Putin candidly admitting for the first time that he decided on the annexation of the Crimea Peninsula in the immediate wake of the toppling of Ukrainian President Viktor Yanukovych. Strelkov, though, says that he was already in Crimea on Feb. 21, 2014, the day that Yanukovych fled Kiev. Prior to that, he spent time on Maidan Square in Kiev scouting his future opponents.

But his big moment would only come later. In April 2014, Strelkov, joined by armed irregulars from Russia, marched from Crimea to the provincial city of Sloviansk, which is strategically located between the population centers of Donetsk and Kharkiv. "In the beginning, nobody there wanted to fight," Strelkov recalls. He and his men attacked a police station in Sloviansk and created facts on the ground. Later, he became the so-called defense minister of the separatist Donetsk People's Republic -- and a bit too well known for Putin's comfort.

Indeed, last August, the Kremlin ordered him to return to Moscow from Donetsk, a command that Strelkov still hasn't gotten over.

Having now moved into his new office -- on the site of a former copper factory -- Strelkov is continuing his fight. Some of his followers are hunched over computer monitors, a couple of them are even wearing camouflage uniforms, just as they did on the eastern Ukraine front. Now, they are cutting PR videos and editing press releases. One of them calls out in frustration: "A grenade launcher is easier to operate than this computer!"

Strelkov says that his new adversaries are the adherents of the liberal opposition who, he believes, are planning a pro-Western revolution on the model of Kiev's Maidan Square in Moscow. When asked if he regrets the death of the murdered opposition leader Boris Nemtsov, Strelkov's press spokesman intervenes, concerned that the question is too provocative. But the rebel leader answers anyway. "Nemtsov had no talent and no accomplishments. He was an enemy of the Russian state and of the entire Russian people." But does he approve of his murder? No, Strelkov says, because it damages Putin.

Before Strelkov entered the spotlight as a result of the war in eastern Ukraine, he even saw President Putin as being part of the enemy camp. He insulted him back then as being a "Latin-American dictator-light," whose power was dependent on his corrupt friends. Strelkov often blasted Putin in Russian Internet forums, once writing that he wasn't any better than the opposition: Both, he wrote, "are two flanks of the same anti-Russian front."

Yearning for a Stalinist Dictator

A picture of Putin in a Navy uniform hangs in Strelkov's office, but he still believes the president is too liberal and too weak. Strelkov wants to see the reemergence of a Russian empire under the leadership of a totalitarian leader and dreams of a czar in the mold of Stalin. Mankind, he says, has "too little experience" with democracy which is why he is a "proponent of an Orthodox monarchy," Strelkov says. The decorations he has chosen for his office testify to such attitudes, with a portrait of Czar Nicholas II on his desk and a golden icon hanging on the wall.

In the Ukraine crisis, the Kremlin gave people like Strelkov a long leash and state television provided a platform to neo-fascists and Stalin supporters so that they could rage against the West. Putin himself adopted their imperialistic slogans by often referring to the "Russian world." That world, Strelkov says, should include Belarus, Georgia, Armenia and perhaps even Central Asia. But Ukraine is definitely part of it, in his view. "The real separatists," he says, "are the ones in Kiev, because they want to split Ukraine off from Moscow."

Russia's right wing finds itself in a love-hate relationship with the Kremlin. The nationalists love Putin's martial appearances, but consider him to be far too hesitant. Some even believe he is working for the West. "Why didn't we destroy the Ukrainian army back in September?" Strolkov asks.

When Strolkov appeared in Ukraine one year ago, news outlets identified him as a member of the Russian military intelligence agency GRU. But the truth is more complex: Strolkov was a senior officer in the domestic intelligence agency FSB, in Chechnya among other places. But he is also fanatically pursuing his convictions, just like many of the Russians fighting in Ukraine.

Ukraine was Strelkov's fifth war. In 1992, he joined the fight in Transnistria on the side of the pro-Moscow separatists. He then volunteered for both of the wars in Chechnya and even joined the war in Bosnia, fighting for Serbia in a unit of Russian volunteers called the "Czarist Wolves." In eastern Ukraine, Strelkov handed down death sentences on his own, citing a World War II decree issued by the Soviets in the summer of 1941 following the German invasion.

Strelkov is a character from the depths of the post-Soviet society: extremist, but not atypical for men of his generation. For many of these men, 1991 was the key year in their biographies with the Soviet Union, the country they grew up in, disintegrated around them. Just as Russia has failed to find its place in the world since then, Strelkov and men like him have failed to find their place in the new Russia.

Some have developed an admiration for Stalin while others, like Strelkov, want to see a return of the monarchy, but the two camps are not at odds. Most of these men are now in their forties, with many having married young and, like Strelkov, divorced young. Bourgeois life offered them little. They had little interest in buying new cars or taking trips abroad and they see Mikhail Gorbachev's perestroika as treason. Indeed, they are the losers of the massive changes Russia has undergone in the last three decades and see the current conflict with the West as Russia's great chance to avenge itself for losing the Cold War.

Strelkov believes he is fighting on the front lines in a vast war, one in which Russia will reclaim its proper place in the global order. It is a worldview with plenty of enemies, including Europe, the US and Russians who don't think the way he does. Indeed, Strelkov doesn't just count opposition activists like Nemtsov among his list of adversaries, elements of the Kremlin elite are also suspect. "The highest officials have close ties with the oligarchs and with the West," he says.

Strelkov's presence in Ukraine was initially a boon for Russian propaganda, giving the war a face. Because he has a thing for old uniforms and for reenacting past battles, he has an aura of eccentricity about him, but many Russians see him as being austere, chivalrous and, most important of all, not corrupt. Newspapers have lauded him as a "Russian Che Guevara" and "Generalissimus of the people."

The Kremlin propaganda machine transformed Strelkov into a national hero almost overnight. But now, it looks as though Russia's leaders no longer have him totally under control and he has become the figurehead of the Russian far right, many of whom are critical of Putin for not having already annexed Donetsk and Luhansk. It is questionable whether this radical element of Russian society will continue to feel bound to the Kremlin on the long term.

Moscow is allowing "the Donbass to become scorched earth," Strelkov says, adding that the president must finally impose order in the Kremlin. The word Strelkov chooses when making that demand is "purge," which reminds everyone in Russia of the terror Stalin unleashed on the country. Reconciliation with the West, he says in parting, is no longer possible. "I hope that Putin understands that as well." 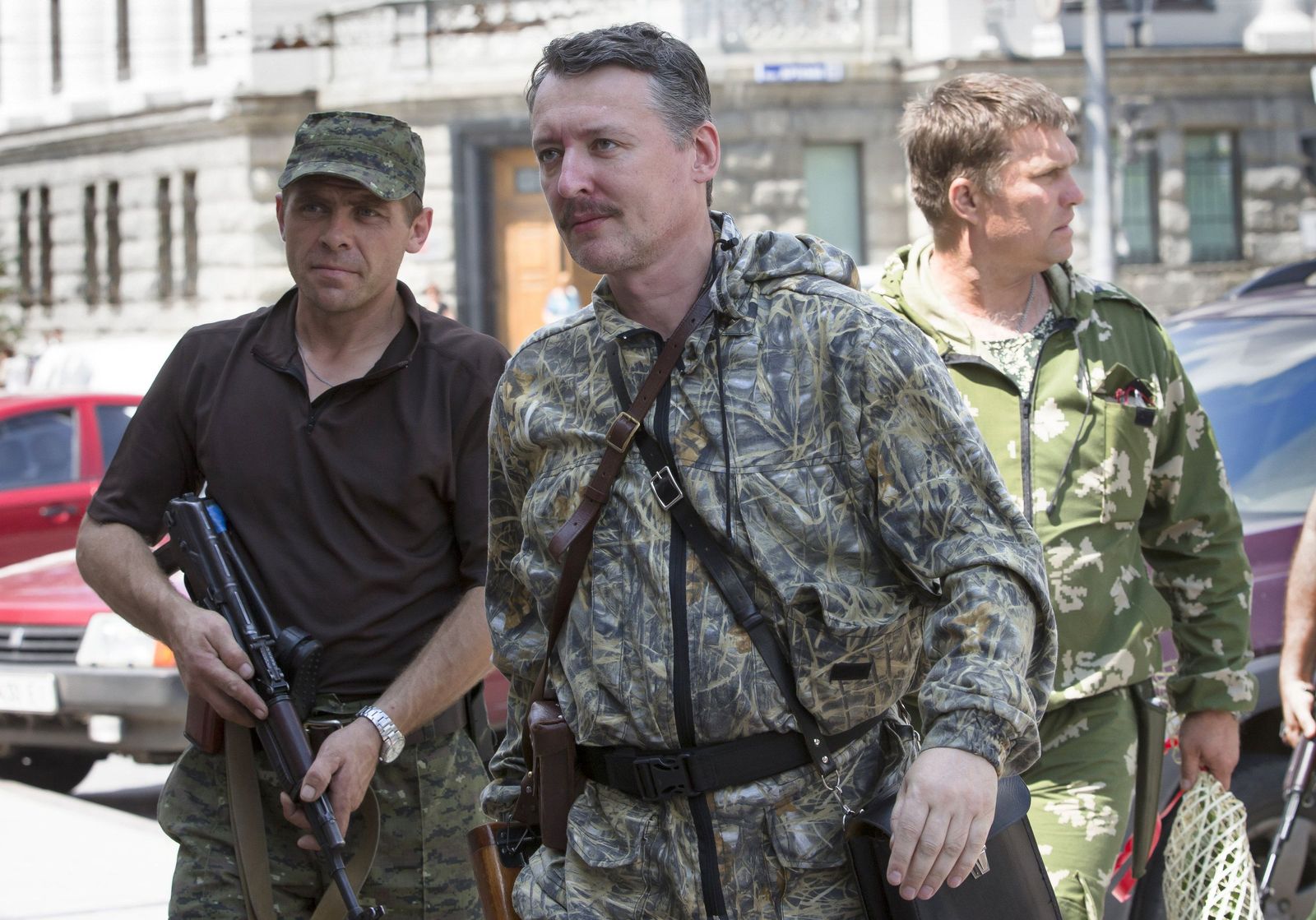 Strelkov in Donetsk last July. He is now in Moscow, but still fighting to return Russia to past greatness.