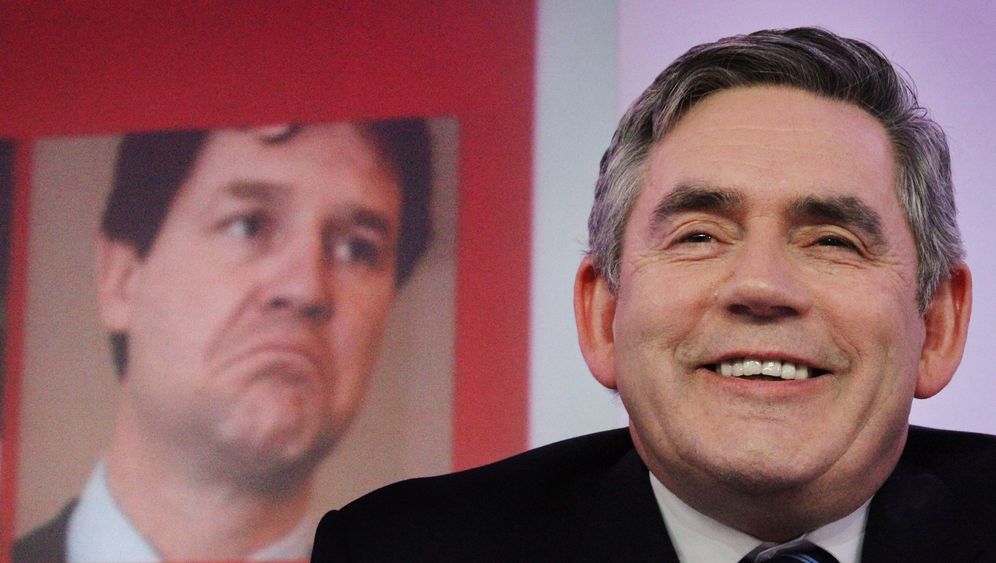 One of the most difficult tests in the life of a British politician is the summons to appear on Jeremy Paxman's "Newsnight" program on the BBC. Paxman, the grand inquisitor of British journalism, has been known to make even seasoned politicians squirm in their seats with his hard-hitting questions. If he feels that an interviewee is being evasive, he repeats his question -- a dozen times, if necessary. He makes it clear that he is not satisfied with their answer and just gives up on them with contempt.

A Paxman interview in the middle of an election campaign is considered so risky that Labour Prime Minister Gordon Brown, 59, initially turned down the invitation. His Conservative challenger David Cameron, 43, also backed down. Both men believed that they could afford to snub Paxman, but they were wrong.

As it turned out, Nick Clegg, 43, the boyish leader of the Liberal Democratic Party, Britain's third party, fearlessly entered the ring with Paxman. He withstood everything Paxman threw his way for a full 30 minutes, and came off looking good in the process: telegenic, relaxed and quick-witted. Compared with the dour Brown and the sometimes supercilious Cameron, Clegg made a profoundly refreshing impression.

The interview, which aired two weeks ago, was Clegg's first sensational success, and it bolstered him and his fans. Several other interviews and two 90-minute television debates later, Clegg has risen to the level of political superstar.

The rise of the election's third man could bring fundamental change to British politics. A historic shift seems on the verge of taking place, and some are even predicting a crisis for the country's unwritten constitution.

Until recently, Clegg's nickname "Nick Who?" reflected the fact that few voters even knew who he was. But now he is already being compared to US President Barack Obama, due to Clegg's magical gift for connecting with voters when he appears on television. According to the astonishing results of a poll taken after his first TV debate, Clegg received the highest approval ratings for a party leader since 1945, when then-Prime Minister Winston Churchill was basking in Britain's victory over Hitler.

The Tories' strategists, who were until recently confident of victory, are frantic. After 13 years in power, the Labour Party is finished, and its prime minister, Gordon Brown, is washed-up and unpopular. And now, ironically, the center-left Liberal Democrats, a party that for decades has carved out an unfortunate existence as a third party in a two-party system, could thwart an election win for Cameron. The British majority voting system has always made it difficult for the Liberal Democrats, because elections are not decided by a party's share of the total vote, but exclusively by the number of constituencies won in a "first past the post" system.

This can be cruel. In 2005, the Liberal Democrats captured more than 22 percent of the popular vote nationwide, but had to make do with only about 10 percent of seats in parliament.

Coalitions are uncommon in Westminster, at least in times of peace. As a result, the natural fate of the Lib Dems has been to remain permanently powerless and marginalized.

Until now, that is.

As recently as early April, London bookmaker William Hill considered the possibility of Clegg's party achieving a majority in parliament about as likely as a sighting of the Loch Ness monster. Clegg's prospects didn't exactly improve when he revealed that he had slept with "no more than 30 women" in his life.

But now that Clegg has hypnotized voters in front of their TV sets, some polls are already putting his party in first place, with about 33 percent of the vote, with the Tories following close behind and Brown's Labour Party bringing up the rear. All polls agree on the fact that a small British party has never made it this far this quickly. Since the surprising poll results emerged, the conservative Rupert Murdoch press, which includes the tabloid The Sun and the center-right The Times of London, has done its best to paint an unfavorable picture of the nation's new darling, but without success. Millions of Britons are in love.

So far, efforts by certain newspapers to change that fact have achieved little. The Sun published what it said were notes written to Clegg that had allegedly been found in a taxi. According to the paper, the notes contained hand-written instructions from an adviser on how to behave in the first TV debate. Clegg is apparently advised that he needs "more passion/conviction" and is told to "speak more slowly" and "look more relaxed." Attempts to force Clegg on to the defensive over expenses he claimed as a member of parliament also had little effect.

Is "Cleggophilia" simply "the biggest load of media-driven nonsense since the funeral of Diana," as London's Conservative Mayor Boris Johnson scoffs? Or does the Liberal Democrat's triumphal procession mark the beginning of a new political era in the UK?

Clegg's overnight success was only possible because both the Labour and Tory Parties have long been discredited in the eyes of many voters, and not just since last year's expenses scandal, which revealed that close to 200 MPs had profited at the expense of the general public. The fact that both parties supported the disastrous 2003 invasion of Iraq is another reason for their unpopularity. These voters hate Brown and despise Cameron in equal measure.

This is the gap into which Clegg has jumped. The surprise contender is wooing frustrated Britons and young voters with the idea of a new beginning beyond the confines of the establishment. "Don't let anyone tell you this time it can't be different -- it can," he told viewers at the close of last Thursday's TV debate.

Clegg also brings along a shadow finance minister with star qualities. Vince Cable is a politician who regularly emerges as the winner of TV panel discussions, particularly when compared with the Tories' inexperienced financial spokesman.

In other countries, protest voters tend to support populists, such as Geert Wilders in the Netherlands, Jörg Haider in Austria or Sarah Palin in the United States. But in civilized Great Britain, it's a different story altogether: Clegg is no outrageous extremist.

Nevertheless, he is unusual for a British politician. He is the son of a half-Russian father and a Dutch mother born in Indonesia. He is married to a Spanish woman, and he speaks German, Dutch, French and Spanish. His sons are not named James and Harry, but Antonio, Alberto and Miguel.

Clegg has worked for the European Commission in Brussels and in Central Asia. He admires the EU project and thinks the euro is a wonderful idea -- two things he has candidly admitted, despite his desire to appeal to the notoriously euroskeptic British electorate.

Like Cameron, Clegg comes from a wealthy family. He enjoyed an extremely privileged education at an expensive private school and attended the elite Cambridge University. But unlike his Conservative rival, Clegg benefits from the charm of the underdog. Cameron is viewed as a "toff," a member of the upper class, while Clegg paints himself as a political street fighter. He has only been an MP since 2005, and now he stands a chance of being the first Liberal to hold power since 1922.

The Dangers of a Hung Parliament

Peter Kellner, head of the YouGov market research firm, is no longer ruling out what was previously seen as the unthinkable. If Clegg's popularity continues to grow until the election on May 6, if he emerges from the last television debate on Thursday with flying colors once again, and if he turns even more heads in the election districts, he could even become prime minister, despite the hurdles posed by British election law.

But a different outcome seems much more likely: No party will achieve an absolute majority in parliament, creating a "hung parliament," something that hasn't happened since February 1974. The Clegg camp could become kingmakers and, in return, demand concessions from the Tories or Labour. The Liberals will most likely want to modify the unfair electoral system and therefore permanently destroy the two-party system.

The Tories are now warning against the dangers of a hung parliament. If there is no majority, says Kenneth Clarke, a former chancellor of the exchequer under Conservative Prime Minister John Major, there will be "a tragedy." The British pound will suffer, says Clarke, the financial markets will punish Britain, and in the end the country's only salvation will be the International Monetary Fund, as was the case in 1976. Clarke is begging his fellow Britons not to vote Lib Dem.

The Moody's rating agency does not share these fears. It believes that a parliament without a clear majority for one party is more likely to lead to a classic coalition, thereby establishing a broad support base for future austerity measures. In this election campaign, it is often forgotten that the British budget deficit is only a few percentage points smaller than the Greek deficit.

The question is: With whom will the Liberal Democrats cooperate? Clegg is keeping all of his options open. At the moment, it is not unlikely that the election could lead to a result that, though reached in a democratic fashion, would hardly seem democratic. The Labour Party could end up receiving the largest number of seats in parliament, despite winning the smallest number of votes of the three major parties.

It would be an embarrassment for a country that likes to claim it bestowed the gift of democracy on the world. Brown, even after losing the election, could be called upon to form the next government, with or without the participation of the Liberal Democrats.

Many warn that this would lead directly to a constitutional crisis, because such a government, supported by only a fraction of the population, would have insufficient legitimacy.

If that happened, the only solution would be new elections.