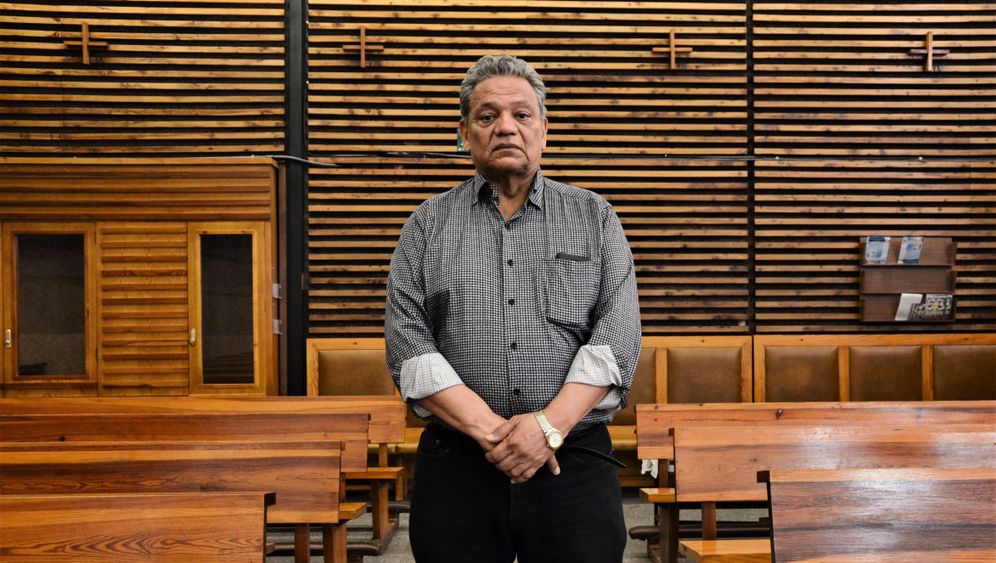 Nearly two years after fleeing his home country of Venezuela, Erick Zuleta is again surrounded by Venezuelans. The Parroquia de Santa Elena, an opulent church in central Madrid, is packed.

Zuleta, 64, wears a Casio watch that is too big for his wrist and shows the wrong time. He hesitates, then folds his hands in prayer and joins the murmuring of the other worshipers: "Give us this day our daily bread, and forgive us our trespasses, as we forgive those who trespass against us."

Zuleta isn't a big believer and he hasn't been to church in years. Back when he still lived in Venezuela, Zuleta preferred to visit his family in Barquisimeto on Sundays, or drive out to the farm he had recently purchased.

Now, however, Madrid is his reality. The city has become the central destination for the growing Venezuelan diaspora in Europe.

Most people who flee hunger, inflation and violence in Venezuela go to neighboring Colombia or Brazil. But those who can somehow scrape together the money for a plane ticket head to Madrid. Nearly every day, flights from Caracas arrive at Terminal 4 at Madrid-Barajas Airport full of Venezuelan tourists, most of whom are there to stay.

Some 21,700 Venezuelans applied for asylum in the EU in the first half of 2019, with the numbers having been doubling annually in recent years. The only countries that produce more asylum applicants are Syria and Afghanistan. If the current trend continues, Venezuela could soon become the No. 1 source of refugees to Europe.

Nearly all Venezuelans who come to the EU request asylum in Spain. And they nearly all go to Madrid. Spain is currently processing more asylum applications than ever before. An estimated 300,000 Venezuelans live across the country -- and there are no signs of this trend slowing down anytime soon. Madrid, some people joke, is turning into a Little Caracas.

Many Venezuelans have European ancestry or even a Spanish or Italian passport. Those who don't request asylum, and their chance of receiving it is better than ever. The Spanish government recently moved to grant rejected asylum seekers -- on a case-by-case basis -- protected status on humanitarian grounds.

Under this status, asylum seekers are allowed to stay and work in the country for a year, though they don't receive any money from the government. Once that year is up, their residency permit can be extended. Venezuelans are the only people to whom Spain awards this special status. The Spanish asylum system is on the brink of collapse due to the enormous number of applications, and the new rule is designed to remove some of the pressure.

It's possible that even more Venezuelans will now try their luck in Spain, but hardly any Spanish people are worried. So far, the newcomers have integrated without much fuss.

Three days before attending mass, Erick Zuleta sat down at his dinner table in his small, two-bedroom apartment in Mostoles, a suburb of Madrid where he lives with his wife, three daughters, a granddaughter and his son-in-law.

The family used to live in a Spanish Colonial villa with seven rooms and 6-meter-high ceilings, says Zuleta. He knows the numbers by heart. Now he and six other people occupy 65 square meters (700 square feet), maybe even less. No one in the family seems to know exactly. The refrigerator is outside on the balcony.

Zuleta's wife has just returned from a trial day at work cleaning the home of a Spanish family and his daughters, too, have found work. The 21-year-old Estefania goes to law school while working at a supermarket on the side. Indeed, the daughters are now the breadwinners, quite a change from the way things were before.

Back in Venezuela, Zuleta had a job representing thousands of bus and taxi drivers. As the head of the local transportation union, he was responsible for negotiating with the country's elites. But when Zuleta supported the protests against the Maduro regime, he slid into the crosshairs of the intelligence service, Sebin. He was arrested multiple times, Zuleta says, though he was ultimately released each time.

The last straw came in July 2017. Zuleta had summoned labor unionists from across the country when a confidant sent him a text: "The director of Sebin is looking for you with everything he's got." Zuleta's unionists blocked the entrance to his office, allowing him to flee in a small car; after that, he went underground.

On the morning of Aug. 2, 2017, he got into the backseat of a car. A young couple was up front and he was pretending to be their grandfather. They were stopped three times by the police and every time, Zuleta had to pay a bribe before continuing on. That is, until he and his accomplices reached the Simon Bolivar bridge, which crosses the Tachira River -- and the border to Colombia.

Thousands of people cross the border every day on foot and Zuleta surrounded himself with dozens of bus drivers and chauffeurs, trying as best he could to hide himself in the crowd. "They told me: If someone recognizes you, run," Zuleta remembers. It was 315 meters to the other side. "It seemed to go on forever." Step by step, the group neared Colombia. Once it reached a white line on the ground and stepped across, Zuleta knew he was safe.

He stuck a SIM card into his cell phone and called his family. They were overjoyed. Only then did he buy a roundtrip ticket to Spain -- the only way the Spanish authorities would permit him to enter as a tourist. Shortly thereafter, he arrived in Madrid, where no one was expecting him.

Venezuela was once the wealthiest country in Latin America. Indeed, when Francisco Franco turned Spain into a dictatorship, many Spaniards fled to the former colony in search of a better life. Today, though, many Venezuelans suffer from hunger and are no longer able to afford food or medication. The direction of migration has reversed.

Refugees have become a popular election topic in Spain, with politicians on the right and far-right using every new boat of refugees that arrives to score points with voters. Those refugees, however, mostly come from sub-Saharan Africa.

The Venezuelans, on the other hand, hardly stand out. Spanish right-wingers and conservatives have grown fond of pointing to Venezuela's national crisis as a warning against socialism; Venezuelan refugees, especially those with anti-government sympathies, are a convenient way to underscore that message.

"Of course it's easier for Venezuelans to integrate here than other groups," says Carlos Gomez Gil. The migration expert conducts research and teaches at the University of Alicante and advises the Spanish government on matters of asylum. The culture, the language -- all of this facilitates coexistence, he says. "That's another reason why there haven't been any problems so far."

Plus, it's mostly Venezuela's middle and upper classes that have so far made it to Spain. Venezuelans have bought thousands of apartments in Madrid's wealthy central districts and real estate brokers rave about the purchasing power of the new arrivals. Anyone who buys an apartment in Spain worth 500,000 euros ($555,325) or more automatically gets a visa. Zuleta believes it is primarily the corrupt accomplices of the Maduro regime who are scooping up Madrid's most expensive real estate as investments.

But there are also those who must sell everything to reach Madrid, and they begin their new lives from scratch. Kennedy is one of these people. The 33-year-old is taking a break along the Gran Via avenue in central Madrid next to his mountain bike. He has only been in Madrid for six days, but already he has found a job as a rider for Glovo, a food delivery service like Lieferando or Deliveroo.

He's using the license and the corresponding profile of an acquaintance, which, of course, is illegal. But Kennedy has to earn money, and fast. He needs 1,500 euros for rent and a flight so that his girlfriend can come join him. Once she's there, the two of them want to start a family. "In Venezuela, our baby would die," Kennedy says. "That's why I'm here."

An astonishing number of Venezuelans work for Glovo in Madrid. It allows them to easily earn a little bit of money -- whether they have a work permit or not. But Kennedy doesn't know his way around Madrid very well yet. Until he figures out how to get where he needs to go more quickly, he's wasting precious time. Now, though, the next delivery order has popped up on his phone. Today, he won't earn much more than 4 euros.

Zuleta still holds out hope that one day he'll be able to return to Venezuela. Of course, in the meantime he would love to work, but he can't find anything. "Too old," he says with a tired smile.

When Zuleta feels the need to revisit his old life, he opens WhatsApp on his phone. Friends and colleagues tell him all about the unbelievable price increases and electricity shortages and he watches videos of people being crammed like animals onto vehicles just to get from one place to the next. His life's work, public transportation, has collapsed.

'It's Easier for the Children'

Shortly before Zuleta enters the cathedral in order to pray with his fellow Venezuelans, he sits in the churchyard outside on a child-sized chair that is far too small for him. The man who Juan Guaido, the leader of Venezuela's opposition, appointed as his emissary in Madrid has come. The former mayor of Caracas is also present.

Speeches are held and "arepas," a kind of Venezuelan biscuit made of corn flour, are enjoyed. The Venezuelans are asked to write down their names and their professions so the Spanish government can get an idea of just how educated the people are who have fled to Madrid. So far, the Venezuelan diaspora hasn't really organized. This day at church will hopefully be a start.

At the end, a Venezuelan singer performs cover songs. Zuleta's daughter, Estefania, sings along, using her cell phone as a microphone.

She turns to her father and says, "Come on! Sing along!"

Zuleta, who is still sitting on the green child's chair, just smiles. "It's easier for the children," he says.

The Casio on his wrist has just stopped, the battery having died. Before it did, though, it showed the time back in Venezuela even months after Zuleta arrived in Spain. He had left it that way on purpose. 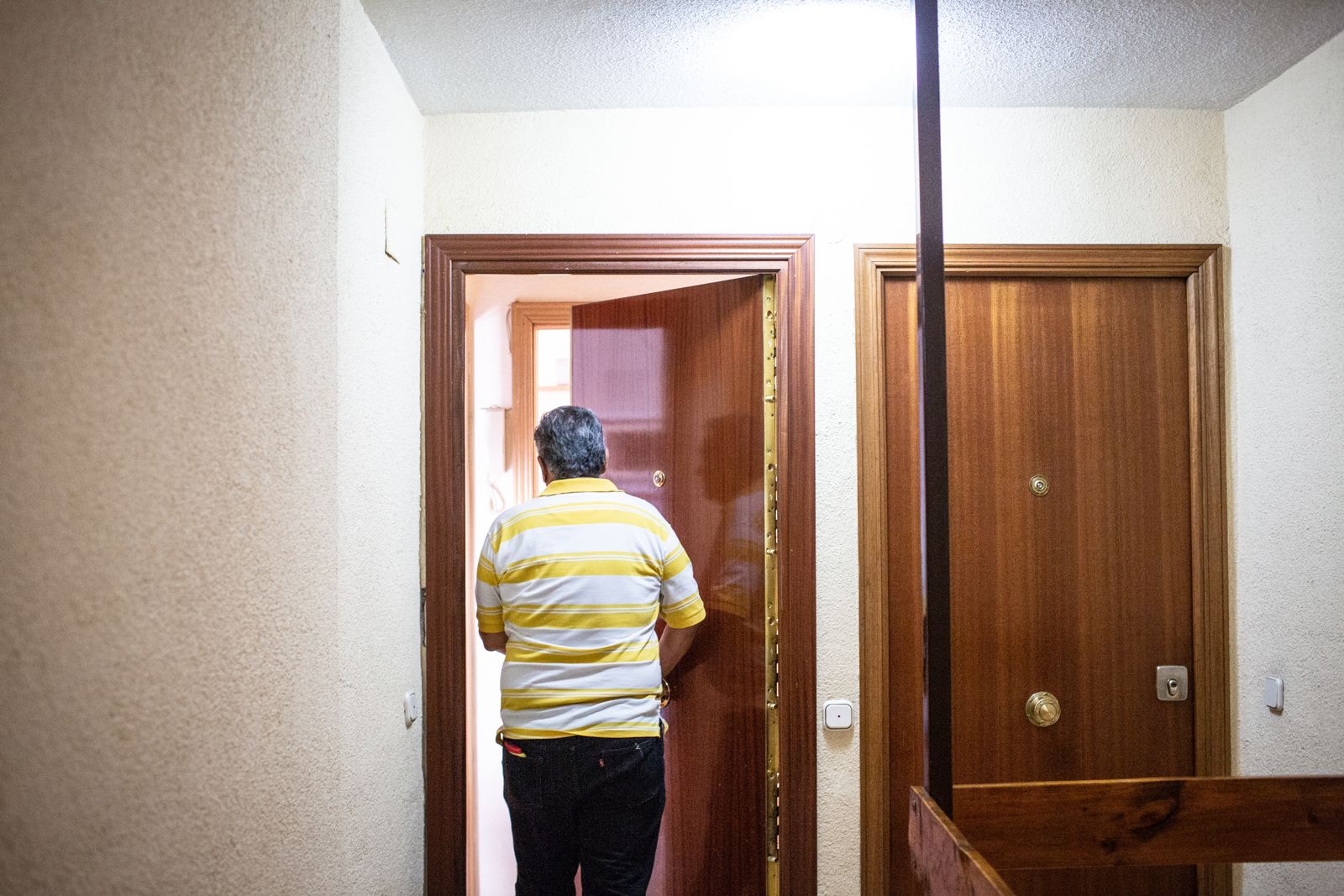 Zuleta walks into his new apartment in Mostoles. 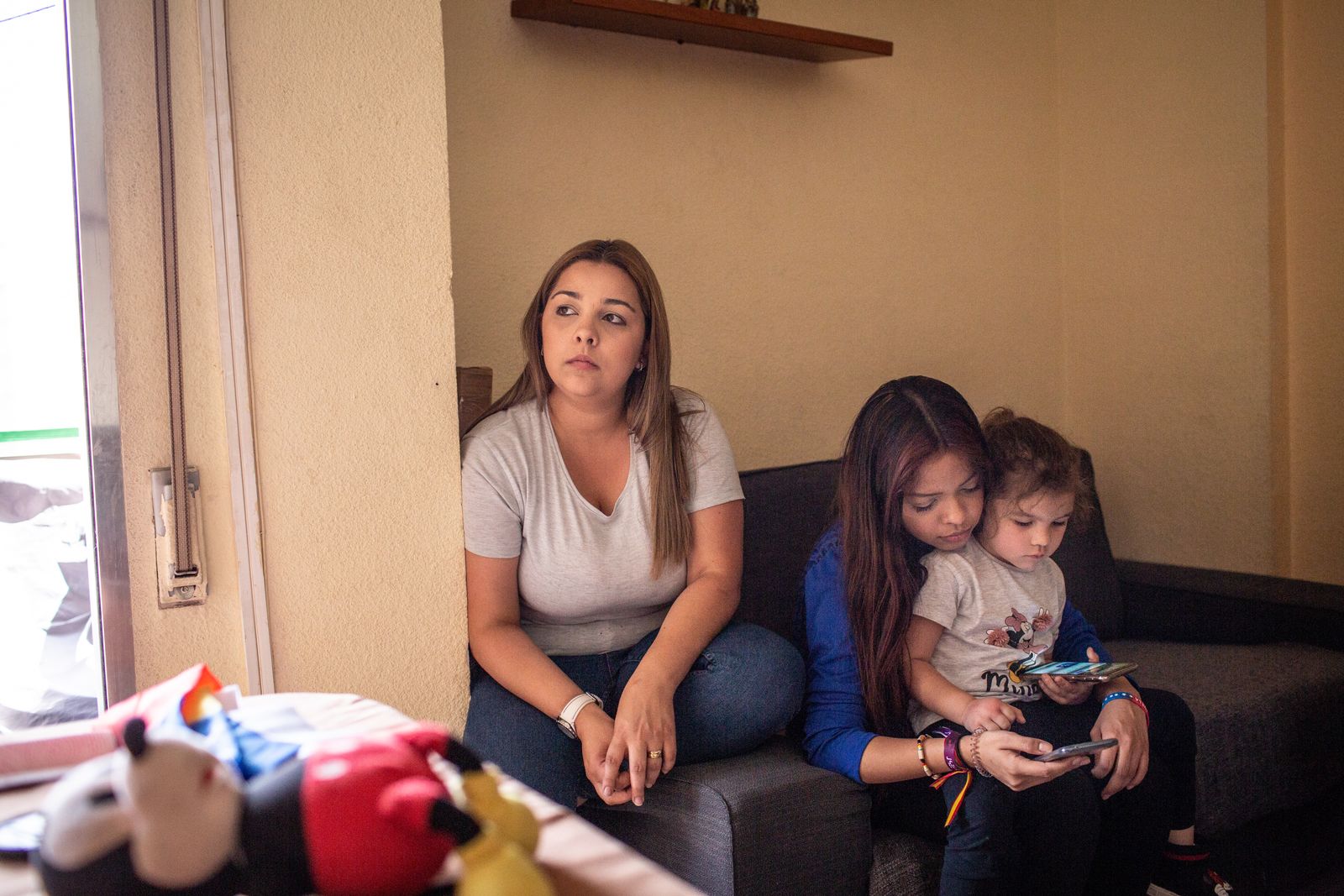 Zuleta's daughters in the family's apartment in Spain. 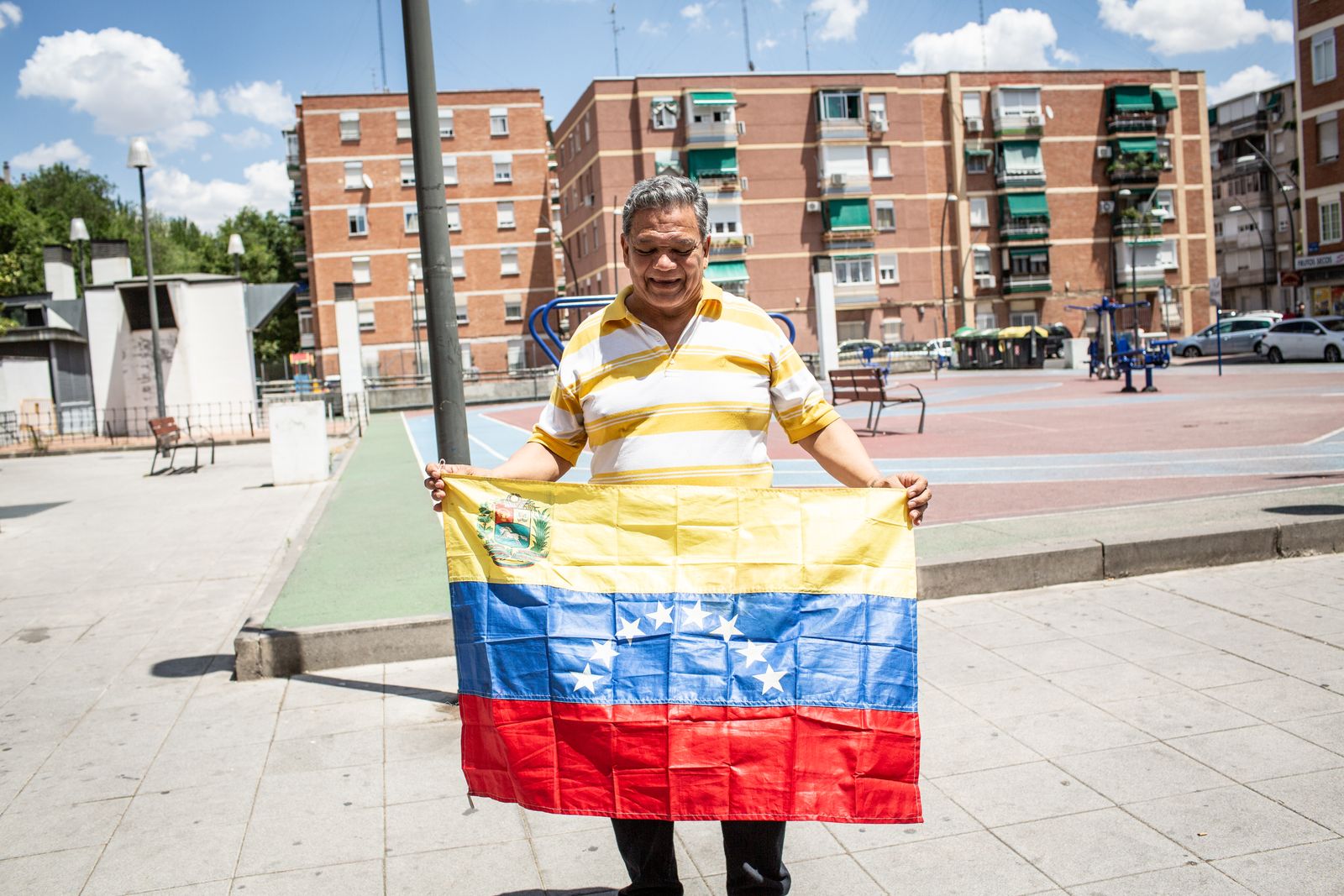 Zuleta always carries a Venezuelan flag around with him. 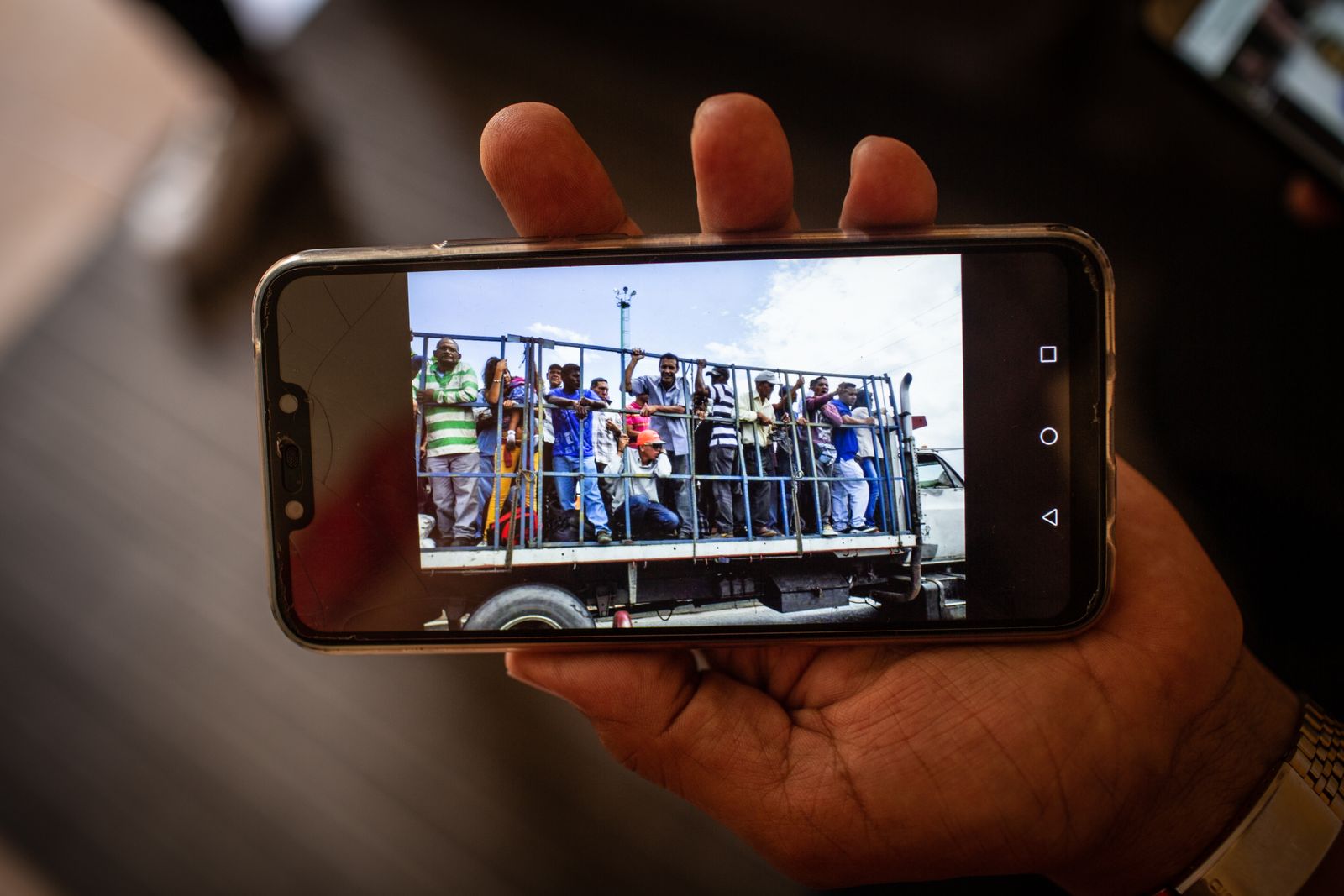 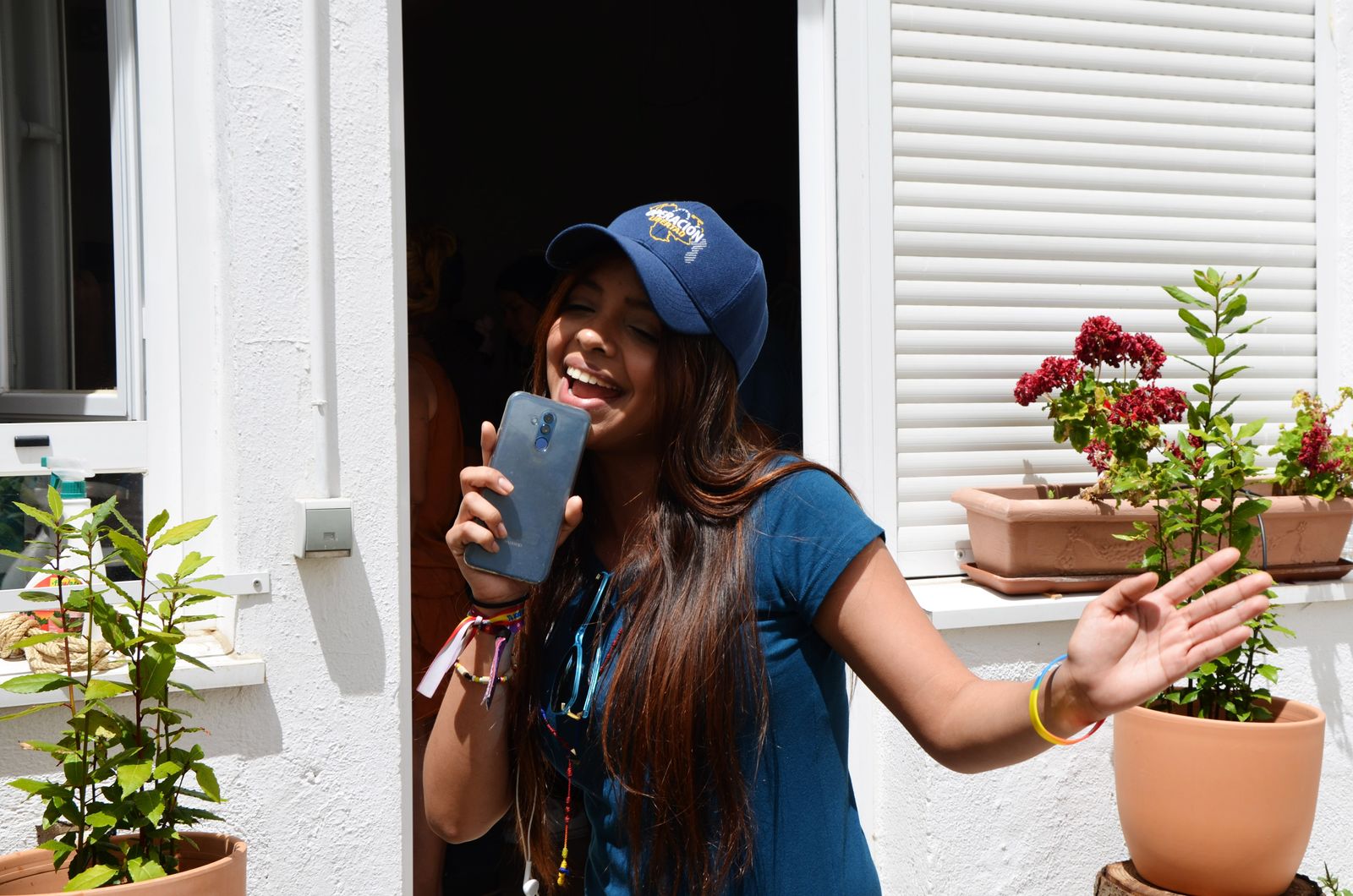 Zuleta's daughter sings into her smartphone.