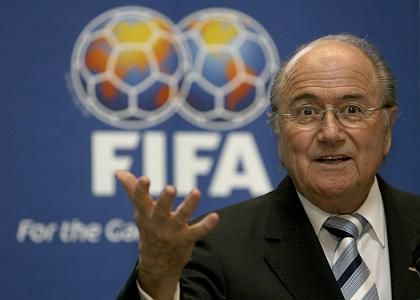 FIFA President Joseph Blatter: "I am not bribable."

For Joseph Blatter, the world football association FIFA is an outfit that unites the planet, an organization in which values like decency, morality and mutual respect hold sway. Batter is Swiss, and he's led the association of 208 national clubs (or 260 million soccer players) since 1998. Blatter views FIFA as a complex, ethical work of art -- somewhere between the United Nations and Amnesty International, one that long ago should have won a Nobel Peace Prize.

But there's also another view of the organization, one that paints FIFA as a global money-printing machine, raking in hundreds of million Swiss francs a year, with revenues of more than 3 billion Swiss francs between 2003 and 2006 alone.

Just under a year ago Blatter dedicated FIFA's new headquarters in Zurich, which cost 240 million francs. Now he can spend his time there dreaming of the Nobel Prize. Five of the building's eight floors are underground -- evidence for his adversaries that megalomania and obfuscation are the real principles behind his tenure.

Since his election 10 years ago, Blatter has had to defend himself against the charge that FIFA can be bought. He consistently denies the existence of any corruption. "I am not bribable," he once said in an interview. "Otherwise you can chop off both of my hands."

But now Swiss investigators have found that sports officials, including representatives of FIFA, may have taken bribes numbering in the millions. The district attorney's office in the Canton of Zug in Switzerland has drafted a 228-page complaint, which includes extensive testimony and evidence of a bribery system.

The prosecutors compiled this information for a case against six former managers of ISMM, a holding company dealing in sports media and marketing rights. The case is scheduled to go to trial in Zug on March 11. Apparently the company used secret payments to buy the support of key decision-makers in connection with the awarding of exclusive football rights.

The case also involves the second-largest bankruptcy in Swiss economic history. ISMM had to file for bankruptcy in May 2001, after the company had upgraded its portfolio in previous years to prepare to take itself public, and had overextended itself while attempting to expand. Not only did the company guarantee FIFA a payment of at least 2.2 billion Swiss francs for television and marketing rights to the football World Cup Tournaments in 2002 and 2006; ISMM also used its subsidiary, ISL Worldwide, to secure rights to almost all major sports events, often at inflated prices.

A deal struck with the ATP tennis organization in 1999, which was set to cost the agency $1.2 billion over a 10-year period, got ISMM into a financially precarious situation. According to investigators, ISMM and ISL Worldwide lost more than 860 million francs in the 2000 fiscal year alone.

The court will now have to decide whether executives of the two companies resorted to any crimes to prevent the collapse of their sports-rights empire. The district attorney's office in Zug is charging the defenders with embezzlement, fraud, several counts of preferential treatment of a creditor, harming creditors and fraudulent bankruptcy. It will call for prison sentences of between three and four and a half years. The attorneys for the defense argue that their clients should be acquitted on all counts and demand compensation for their clients' legal fees.

Thomas Hildbrand, the extraordinary investigative judge who, like Blatter, comes from the tiny Swiss town of Visp in Canton Wallis, has spent three years researching the reasons behind the ISMM bankruptcy. He has flown as far as Brazil and Japan to question witnesses. 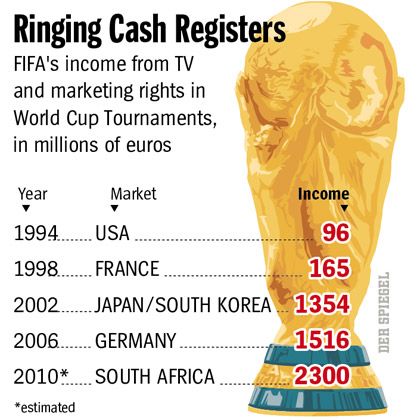 As in the recent tax-scandal case of Klaus Zumwinkel, a former German postal executive, shady foundations play a key role here. One was called Nunca, established in the Liechtenstein capital Vaduz in 1998. Sunbow, the second foundation, was established more than a year earlier in the British Virgin Islands, until it was acquired by Nunca on Feb. 8, 1999.

Even at ISMM, which went by the name Sporis Holding AG in the late 1990s, only a select few were aware of these connections. The two foundations do not appear on balance sheets or organizational charts of the complex group. Investigators believe, however, that they were clearly "economic business units" of ISMM.

Sunbow became a customer of LGT, the same bank German business executives like Zumwinkel apparently used to dodge German taxes. Sunbow's account No. 193.223.31 soon became a busy place. In late May 1999, the sum of 36,130,220 francs was deposited into the account. The payment had come from Sporis Holding AG's account with Banque Nationale de Paris. The attached memo read: "Rights acquisition costs."

Between June 3, 1999 until Jan. 15, 2001, Sunbow's multi-million-franc fortune sank to a balance of only 2,134.90. Investigators believe 18,198,310 francs were "transferred to the accounts of individuals who were directly or indirectly associated with contracts that the ISMM Group concluded. These amounts were perks or bribes."

That's what it says in the file.

The prosecutors believe that they have so far identified two FIFA representatives who received bribes. Sunbow apparently paid 211,625 francs, in two separate payments, to Paraguayan Nicolás Leoz, the president of the South American Football Association, who has been a member of the FIFA executive board since 1998. Shortly before Christmas 1999, Muhidin Ndolanga, the then president of the football association of Tanzania, allegedly received 15,975 francs. Ndolanga denies the allegation, while Leoz has declined to comment. 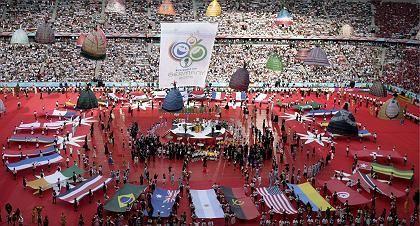 Opening ceremonies at the 2006 World Cup in Germany.

The remaining millions initially seeped into a maze of front companies. Sicuretta, a foundation registered in Vaduz, received 5,873,224 Swiss francs. Taora, another Liechtenstein foundation, absorbed 5,123,206 francs. According to investigators, four million francs went to Gilmark Holdings, a company registered in Hong Kong, while another 2,564,630 francs were apparently transferred to a Renford Investments Ltd.

The investigators are convinced that the money was then transferred from these entities to corrupt officials. But the traces have been wiped clean. Prosecutors believe at least one man knows the names of the beneficiaries, but he's the principal defendant in the trial: 65-year-old Jean-Marie Weber, the former vice-president of the ISMM supervisory board.

During the hearings, Weber behaved like Helmut Kohl, the former German chancellor and chairman of the conservative Christian Democratic Union (CDU), when confronted with charges of illegal party contributions. He kept his secrets to himself. The payments, Weber said under oath, were "confidential" and he intended to respect this "principle of confidentiality." Weber mentioned "commissions" and "fees" which had been paid "in parallel to the purchase or sale of rights."

An attorney from the small Swiss city of Baar described to investigators how silently Weber operated. The attorney had managed the almost six million francs that had been transferred from the Sunbow Foundation to Sicuretta, one of the front companies, in eight separate payments. The attorney said that he had withdrawn the entire sum in cash each time and turned it over to Jean-Marie Weber -- without getting a receipt.

According to the attorney, the money had been earmarked "for the acquisition of rights." The attorney was part of the network. Weber had invited him to attend a match at the football World Cup in Paris in 1998, where he introduced him to the freshly elected FIFA president, Joseph Blatter.

Weber and Blatter have known each other since the 1970s, when both men worked closely with former Adidas CEO Horst Dassler at the German company's corporate branch in the Alsace region of France. Blatter was the technical director of FIFA,Weber was Dassler's personal assistant. Dassler recognized early on how much untapped marketing potential big sporting competitions had for his company. And because he had always enjoyed the best of relations with FIFA officials and the International Olympic Committee, Dassler founded the ISL agency in 1982. He was soon merchandising for both the World Cup and the Olympic Games.

This pioneering phase was probably the period when Jean-Marie Weber learned the art of bribery. The ISL agency's rapid rise to the position of global industry leader, followed by its bankruptcy after 20 years (which ended when ISMM acquired it), apparently went hand in hand with lavish bribery budgets from the very start. One defendant told investigators that since its founding ISL had been involved in the "preferential treatment of important personalities in sports to promote its sports policy and economic goals."

After the early death of Adidas' Horst Dassler in 1987, according to the documents, Jean-Marie Weber took over the job of "cultivating relationships." The Alsace native, who was working without a written employment contract and for whom, at the time of the ISMM bankruptcy, a "base annual salary" of 870,000 Swiss francs had been negotiated, became one of the most mysterious figures in the business of international sports. He was dubbed "the man with the black list" in the industry.

Weber emulated Dassler, his role model. He used Sporis Holding AG as a hub for "all sorts of payments that were dangerous from a tax perspective." The investigators learned of this through an attorney who was familiar with the internal procedures.

Problems only began occurring when Sporis was supposed to go public in the late 1990s to raise fresh cash for the business. According to an internal memo, no figures were to appear in the books "that could be interpreted as tax evasion." To keep up appearances the dirty millions were to be "shifted to a foundation with a one-time endowment," as one of the defendants described the arrangements. This led to the creation of Sunbow and Nunca.

The district attorney's office has untangled this web of foundations because it believes the mess also conceals damage to ISMM's creditors. The 36 million Swiss francs that were transferred from Sporis Holding AG to Sunbow, say prosecutors, were concealed in the consolidated financial statements.

Now FIFA officials fear Jean-Marie Weber may surrender his "black list." Weber could face four and a half years in prison. According to the minutes of a telephone conversation conducted by one of Weber's attorneys, which investigators have obtained, "The recipients of these funds could find themselves in an embarrassing situation."

FIFA President Blatter has declined to comment to SPIEGEL on the current case. However, when it comes to his own role, he categorically states: "I have never -- in connection with the awarding of rights or in other circumstances -- accepted any money, nor had any money accepted on my behalf."