Prior to Thursday evening's euro-zone agreement on a second aid package for Greece, the demands for action had become deafening. Some were insisting that Athens was doomed if Europe didn't undertake a significant restructuring of the country's debt. Others said such a move would be disastrous, and would result in riots on the streets of the Greek capital.

In the end, euro-zone leaders gathered in Brussels opted to split the difference. Greece gets €109 billion in aid, allowing it to remain solvent through 2014 -- but private creditors are to have a significant role to play in helping Athens find its way out of the debt predicament in which it finds itself. By 2014, private involvement is to be worth fully €50 billion -- much higher than expected.

In addition, the European Financial Stability Facility (EFSF) will be granted the authority to buy bonds of debt-stricken euro-zone countries as a way of extending them a pre-emptive credit line. The move puts the EFSF on the path to becoming a kind of European Monetary Fund on the model of the Washington-based International Monetary Fund.

"It was a meeting at a difficult time and I am satisfied with the results," said German Chancellor Angela Merkel. "Developments have shown that we in Europe need to work together more closely and more flexibly."

Private sector involvement is to take the form of a debt swap, whereby private investors will be able to exchange their current Greek bonds for EFSF bonds during a brief time window this autumn. The move will likely be viewed by rating agencies as a selective default, making Greece the first euro-zone country to default.

Euro-zone leaders also lowered the interest rate Athens is required to pay on its rescue loans to 3.5 percent. "I think this is extremely important to ensure the debt sustainability of Greece," said European Commission President Jose Manuel Barroso.

German commentators on Friday also take a closer look at the deal.

"First of all, it is commendable that after the German-French disagreement in Brussels a tangible solution even came about. The chancellor can count the participation of private investors, something she had been pushing for months, as a success. Now one point of contention that was always cause for uncertainty has been resolved."

"The second piece of good news is that Greece will de facto be taken off the capital market for a decade. Figuratively speaking, that means the ailing country will be moved from the intensive care unit to a rehabilitation facility. The third plus is that the rescue fund EFSF may allocate pre-emptive credit lines, though naturally with the German caveat that certain conditions be imposed."

"But questions remain. Greece's debt problem will not be solved -- the high level of national debt is hardly reduced. The ongoing burden will only ease when the EU nations finally stop charging punitive interest on their loans."

"A primary problem, as experience shows, is that the markets react quickly and mercilessly. After summits investors always show relief until new pressures start building. The weakness of the deal is already apparent: The rescue fund will not be increased and it is doubtful whether or not €440 billion will be enough, because no solution was found for Italy in Brussels."

"The 17 heads of state and the European Central Bank have obviously acknowledged the depth of the problem, and this was clearly an effort to overcome the self-imposed blockade and break a number of euro-zone taboos. This effort includes the buyback of Greek bonds, in part through the European rescue fund, the EFSF."

"It's also right that the Greeks (as well as the Irish and the Portuguese) should pay lower interest for EFSF loans. Rich nations don't need to profit from a crisis among the poorer member states. The idea of extending the terms of aid loans is also reasonable because the Greeks will need many years to free themselves from the current mess -- and they'll manage it only with help from their partners and friends in the EU, and in a currency union that has finally committed itself to a restructuring plan. This will all cost money."

"But is it all really necessary? Yes. The currency union is worth the sacrifice, above all for Germans, because we have the euro and its positive influence on our export markets to thank for our prosperity … Even the stability and growth pact never managed to replace the missing EU-level coordination in financial and economic policy that the euro requires. But that is the direction Europe needs to head. The Brussels summit represents the first real step."

"A new epoch has begun in the history of the euro. There were three remarkable developments at the EU summit in Brussels. First, the European Central Bank (ECB) was deprived of its power. Second, no more respect will be paid to the ratings agencies. Third, it is only a matter of time until euro bonds are used across the board. All three developments are worthy of embrace. They are also unavoidable if the euro is to survive."

"In the long term, this means that the euro zone is declaring independence from the financial markets. That is a historic step."

"The bankers are not stupid. After the months of wrangling, it was entirely predictable (that private-sector creditors would be involved in the bailout). Many institutions have already reacted, by selling as many Greeks bonds as they can, buying credit default swaps and already partially writing down their exposure to Greek debt."

"In plain language, this means that the burden on the financial industry will generally be limited. In any case, the whole thing is voluntary for the banks -- even if no one really knows how the 'voluntary' participation will ultimately be divided up so that the total amount ... the private sector is supposed to provide, is reached."

"At the same time, the banks can be happy that the new rescue package also grants the EFSF more flexibility. In the future, it will be able to buy up bonds, which was not previously possible and which ultimately benefits banks and insurance companies. They will be able to dump any bonds there that they want to get rid of, on top of their voluntary contribution."

"Contrary to expectations, the message of the crisis summit to save the euro turns out to be clear and European. The EFSF rescue funds now have significantly more duties and flexibility. With that Angela Merkel and Nicolas Sarkozy have helped a European monetary fund into being -- an apparatus that corrects the construction flaws of the monetary union, a common currency without political union. That is the sensation of the meeting, which also made Greece's debt more manageable."

"(A European monetary fund) would be a bulwark against dangerous speculation attacks. It is the guarantee that the euro-zone countries stand together for the euro -- and thus indirectly for each other.

"Is that then the beginning of the transfer union so feared by the Germans? It is at least a step toward integration. Through the revaluation of the EFSF, chances of curtailing the crisis are good." 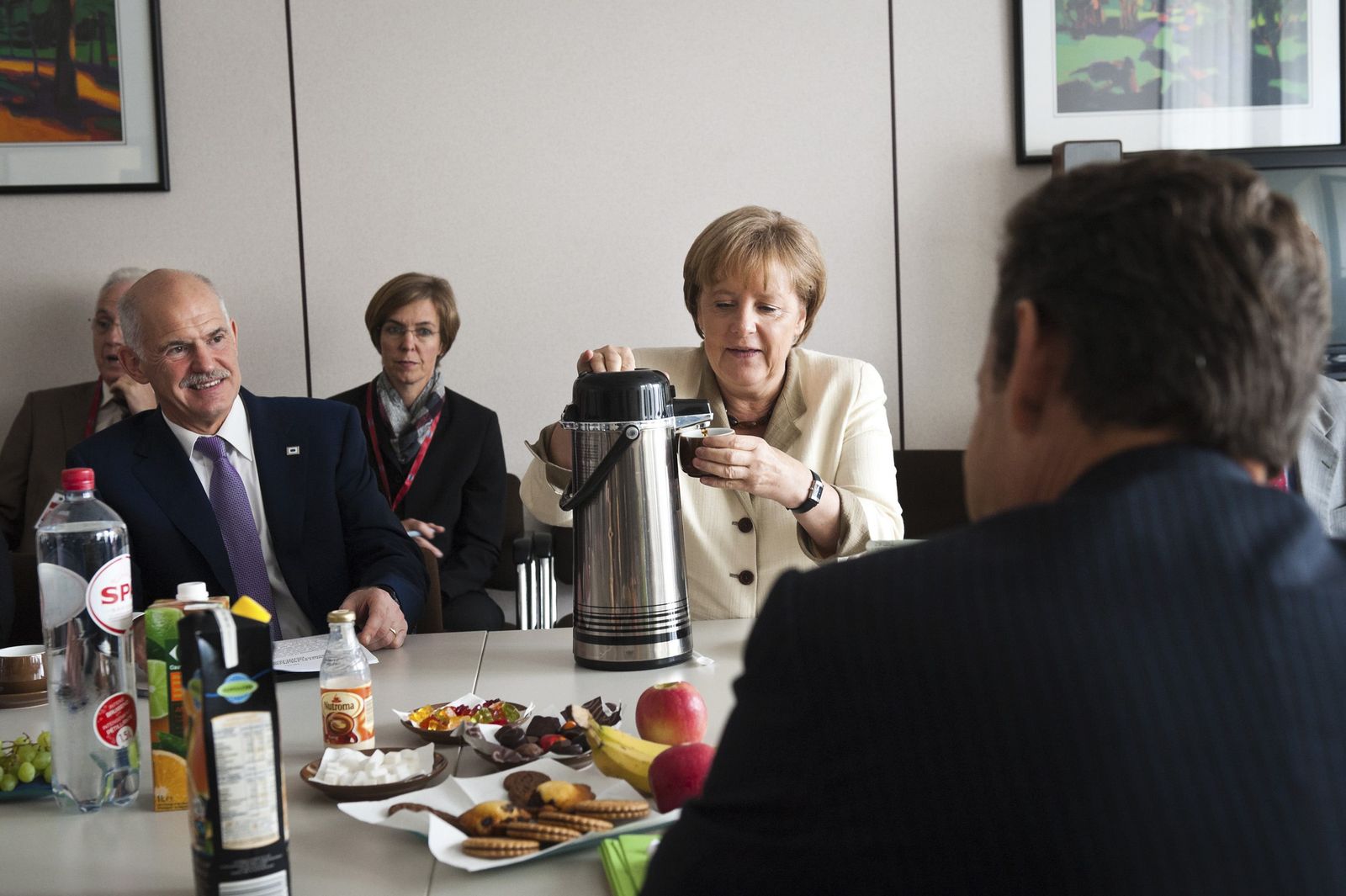