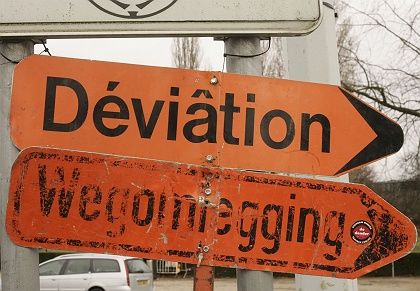 Belgium and the road to nowhere. The linguistically divided country seems incapable of moving forward.

The Belgian Prime Minister Yves Leterme threw in the towel late on Monday night, saying he could not force through a consensus between the Flemish and French-speaking coalition partners.

Leterme offered his resignation to King Albert II, who has so far not formally accepted it. The king is now holding consultations with lawmakers expected to last several days.

In his statement, Leterme, head of the Flemish-speaking Christian Democrats, said the "federal consensus model has reached its limits" -- raising the specter of Belgium breaking up for good. The prime minister had a self-imposed July 15 deadline to come up with an agreement on constitutional reform.

The nation's two main regions -- Dutch-speaking Flanders in the north, and Francophone Wallonia in the south -- have enjoyed increased regional autonomy since the 1970s. The prosperous north now wants more autonomy. It has pushed for reforms that would shift responsibility for taxation and some social security down to the regional level. Francophone parties accuse their Flemish counterparts of trying to separate the north from the poorer south, where unemployment is three times as high.

Matters have been further complicated by a dispute over an electoral district that comprises largely Francophone Brussels and 20 Flemish-speaking towns near the capital.

German papers on Wednesday are concerned about the political crisis at the heart of Europe, but most hold out hope that the Belgians will save their government.

"There is a great sense of perplexity. No one knows how Belgium should go forward. New elections won't bring any new power relations and so won't bring any solution. Before one starts to criticize small Belgium for its political incompetence one should reflect on the fact that if the Flemish want more regional autonomy and the Walloons are fearfully fighting against that, as in all political conflicts, it is a question of the deep desire for self-determination, identity and belonging. Belgium's search for a new internal balance is not simply about the country's folklore. It concerns all of Europe."

"The vast majority of the six million Flemish and four million Walloons have nothing against living in the same state, even if it is often a parallel existence. What has pushed the country to the edge of a crisis of state are the provincial-minded politicians and the parties which have become mere lobby groups. Stubborn insistence on proportionality and the splitting of the party system along both political and linguistic lines have caused the art of compromise to slowly shrivel away. That is why there is no easy way out of the crisis. The voters should now speak."

"In terms of economics, Belgium is the most successful 'failed state' of all time. Its per capita income is way ahead of Germany, the world's leading exporter "

"Belgium can continue to flourish without a national government for the simple reason that the cabinet doesnt have to decide much anyway. Most authority has devolved to the regions  The central government is left to deal with foreign policy, defense and finance policy -- all issues that are increasingly taken care of at the EU level."

"The Belgian government still controls spending on social welfare. And this is where the conflict has blown up between the two language groups, because rich Flanders wants to pay less for poorer Wallonia."

"There is still no solution in sight. But part of the Belgian paradox is that there will be some sort of compromise at some stage. Belgium is not lost yet."

"In Belgium the word 'separation' is rearing its ugly head again. But things are still not quite that bad. Belgians are masters of muddling through and reaching compromises. Once again King Albert II is playing a key role: He can reject Leterme's resignation and force the coalition partners to work together for a transitional period. He could also ask someone else to form a government."

"Snap elections are unlikely: that would require a compromise in the dispute over the bilingual electoral district in Brussels. This is the issue that forced the break-up of the government. It is possible that voters will be asked to elect a new parliament when they go to the polls for European and regional elections next June. Now it's a question of playing for time. No one in Belgium believes in big solutions that will ease the conflict between the linguistic groups in the long term."

"Belgium had always prided itself on being a model for Europe: exemplifying, through the art of compromise and the virtue of tolerance, how nations and cultures can exist peacefully side by side. The country can no longer claim this. The latest political crisis sees the kingdom moving towards the limits of being governable. It is difficult to understand how a people can get so caught up in trifles that they allow the very existence of the country come under threat. On the surface the conflict seems to hinge on a small electoral district in Brussels that was supposed to be split up, ending its bilingual status. "

"In reality, however, the Belgians are arguing about much more. The question is how much solidarity people are prepared to show when times are tough. The rich north no longer wants to help out the south, which has been buffeted by globalization. In the end it's all about money."