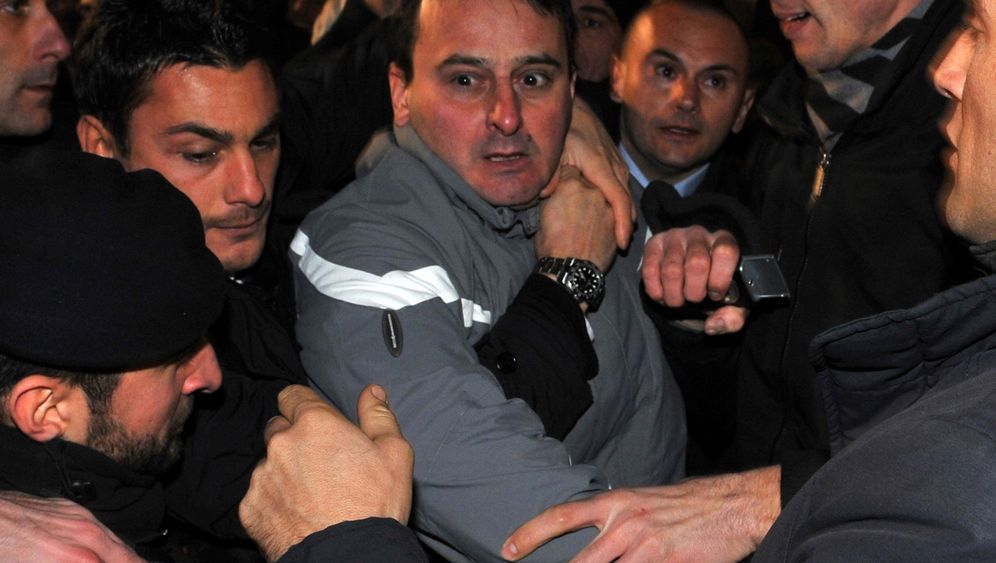 Two days after being wounded in a rally in Milan, Italian Prime Minister Silvio Berlusconi is recovering in the city's San Raffeale hospital. Outside the hospital, an already polarized populace is reacting to the attack with a mix of glee, shock and even some soul-searching.

The attack came Sunday evening after Berlusconi finished delivering a speech in front of Milan's Duomo, the city's massive Gothic cathedral. Video footage of the attack shows Massimo Tartaglia, 42-year-old man with a history of mental illness, hurling a souvenir statue of the cathedral at Berlusconi's face, leaving the prime minister with a fractured nose, two broken teeth and cuts on his lips and face.

For months, Berlusconi has denounced the "climate of hate" he believes he is enveloped by. Indeed, the prime minister is having to juggle a number of problems on numerous fronts: His wife has filed for divorce citing his fondness for young women; the country's highest court ruled in October that he was not immune from prosecution while in office and could therefore stand trial in three ongoing cases, including one for corruption; there are rumors about his consorting with prostitutes; and a Mafia turncoat recently alleged that he had ties to the country's criminal underworld. Furthermore, on Dec. 5 -- which was unofficially designated "No Berlusconi Day" -- tens of thousands of protesters marched in Rome demanding his resignation.

In Tuesday's newspapers, German commentators see the attack as a distressing indicator of just how low political and public discourse has sunk in Italy. They are hopeful, though, that the attack will get people to rethink the situation and prevent more violence.

"We now know that what happened in Milan was the relatively spontaneous act of a mentally ill man acting alone. Likewise, there is no real proof that the tenor of the political debate in his country encouraged him to this outburst of violence."

"Nevertheless, the man's act has once again set in motion a discussion about the state of political conflict in Italy. The political climate is heated up -- and it's mostly Berlusconi's fault. And that's not just because his personality is strongly polarizing. It's also because whenever he is feeling pressure -- which he currently is from many sides -- he attacks his opponents and state institutions with very sharp words, which enrage many people. Recently, he even went so far as to say that there might be a 'civil war' if certain judicial reforms (that were very important to him) should fail. Still, it would be inappropriate to claim at this point that the prime minister has himself to blame for being attacked."

"The man who gravely wounded Italy's prime minister has been in psychological treatment for 10 years. Thus, you could dismiss his act as that of a crazy person and only question whether Berlusconi's security detail failed to do its job. But in truth -- and this is something that most Italian commentators on both the left and the right agree upon -- this act was the culminating point of Italy's political crisis. This is the expression of the climate of hatred that has characterized political conflict in the country for some time now and that has split the political environment, which is worse than it ever has been, into two irreconcilable camps."

"Both sides have played a role in poisoning the atmosphere. In recent years, the left has hardly pursued any other issue as intensively as it has its demonization of its rival, Berlusconi. And, for years, in the context of his legal problems, the prime minister and his followers have not shown prosecutors, judges and sometimes even the president the respect they deserve as representatives of legal and democratic institutions. However, this of course in no way makes it right for someone to violently attack the prime minister."

"Thus, in recent months and years, political debate in Italian has become increasing less compromising and contained while, at the same time, nothing has been done to resolve the country's pressing problems. The doctors are estimating that Berlusconi will need 24 days to get better. The country's political class should take advantage of this period to reflect on how they tone down public debate. If political polemics exceeds all boundaries once again and ignores the limits of both propriety and good taste, the next unstable soul will soon turn hate-filled words into action. The silver lining is that the prime minister's wounds are not life-threatening. But this wake-up call will be heard and understood."