There are, it would seem, some people in Europe who think that British Prime Minister David Cameron did the right thing by leading his country into isolation at the European Union summit in Brussels last Thursday. Almost all of them, however, are members of the euroskeptic wing of his Conservative Party.

Indeed, even his own government appears to be deeply divided over Cameron's rejection ofEU plans to deepen fiscal unity in order to strengthen the European common currency. Nick Clegg, head of Cameron's coalition partners, the Liberal Democrats, refused to sit in his usual spot next to the prime minister during his address to parliament on Monday.

Several other senior Liberal Democrats have attacked Cameron for being "unbelievable cackhanded" and saying "there is going to be a price to be paid," according to a report in the Guardian.

The recriminations come despite Cameron's attempt to defend himself before British lawmakers in a speech before parliament on Monday afternoon. He said that "it was not an easy thing to do, but it was the right thing to do." He also claimed that he had negotiated in "good faith" and that his demands had been "modest, reasonable and relevant."

Britons themselves would appear to back their prime minister. According to a poll conducted by Populus for the Times, only 14 percent disagreed with Cameron's use of the British veto, with 57 percent approving. Still, with Britain now isolated -- as the only one of the 27 EU member states to have outright refused to participate in stricter fiscal rules -- many in London are now questioning whether Cameron had completely thought through his negotiating strategy.

German commentators jump into the debate on Tuesday.

"One must ask whether Cameron's veto really was the act of heroism that ultra-conservatives have portrayed it to be. There are indications that the prime minister simply lost a gamble. There are increasing numbers of reports that diplomatic preparation prior to Cameron's appearance in Brussels was abysmal and that other European leaders found his tactics infuriating. It could very well be that the most important decision Cameron has yet taken was the result of astonishing diplomatic naiveté."

"In addition, nobody can seriously believe that Great Britain's shrinking influence in Europe will have no consequences for the country's economy. The Conservative-led government is pursuing strict austerity measures and is facing a recession. More than ever before, Cameron should be trying to achieve greater independence from the financial markets and focus on strengthening British industry. And British industry is dependent on the European common market to which Cameron has just given the cold shoulder."

"In the opinion of the British themselves, David Cameron actually did everything right. ... Ever since the European Economic Community was established in 1957, the British have enjoyed their special status. They don't consider themselves to be part of the Continent, they flirt constantly with leaving the EU and insist on a rebate on their contribution to the EU budget. But that can not go on forever, something that Cameron himself knows. And his ostentatious action in Brussels could even have the effect that the British start to slowly recognize that fact."

"Cameron has abandoned Britain's claim to playing a leading role in the European Union. And the Continent is not prepared to wait. As the recent summit showed, it is quite willing to push forward with European integration even without the British."

"For now, the euroskeptics in the UK may see themselves strengthened in their position and view Cameron's veto as a first step toward a departure from the EU. But one thing should be clear to everyone else: The time has come to seriously discuss the benefits of EU membership for the UK, to make the case (for membership) -- and to finally make a decision."

"The Conservative prime minister considers his go-it-alone policy to be the correct move, but his Liberal Democrat deputy believes it is wrong. That makes for a complicated constellation -- and not just because it will make relations more difficult between Britain and its friends on the Continent. It is also dangerous because it will create massive tensions in his coalition government. Cameron's energetic and self-confident appearance on Monday in the House of Commons won't change anything. Still, Cameron is far from alone in his view -- on the contrary. The English press ... is celebrating his decision, and a majority of his compatriots also support the move."

"Cameron's positive reception in parliament is coming from a faction in the Conservatives that is already breathing down his neck and pressured him into his position in Brussels by pointing out London's interests as a financial capital. Perhaps the Conservative leader had hoped that, with his veto, he would be able to quiet this faction. However, that could prove to be an error. Because once they have tasted blood, the euroskeptics who already view the allegations that England is isolated as a badge of honor, may agitate even more vehemently for Britain to leave the EU. And Cameron, who is correctly defending EU membership as being in the national interest, will have to see how he can stuff this genie back into the bottle -- and how he can bring the tumult in his coalition back under control. Of course, it is unlikely the Liberal Democrats will want to carry things too far, because new elections could be disappointing for the party."

"The chances of getting Cameron to agree to transform the EU into a fiscal union -- a transformation designed as a precursor to political union -- without getting anything in return to sell to his people back home, would have been hopeless even in normal circumstances. The fact that it came as part of efforts to save a currency which the British have never believed in, made it impossible."

"Whatever one might think about how the veto came about, whether Cameron misinterpreted the diplomatic signals, whether his stubbornness left the German chancellor no option but to let French President Sarkozy deal with him, or if everything was just a conspiracy by the French who twisted Cameron's demands for guarantees for the City of London and want to portray the Anglo-Saxon financial industry as the scapegoat for the euro crisis -- from Britain's point of view, the prime minister had no choice. That is reflected in the clear support he is now getting in Britain. His coalition may be wobbling, but Cameron doesn't have to worry about his future for now."

"It would be better now to think about what common ground remains between the two sides, and what would help both, rather than just bashing the Brits. A functioning common market is right at the top of the list." 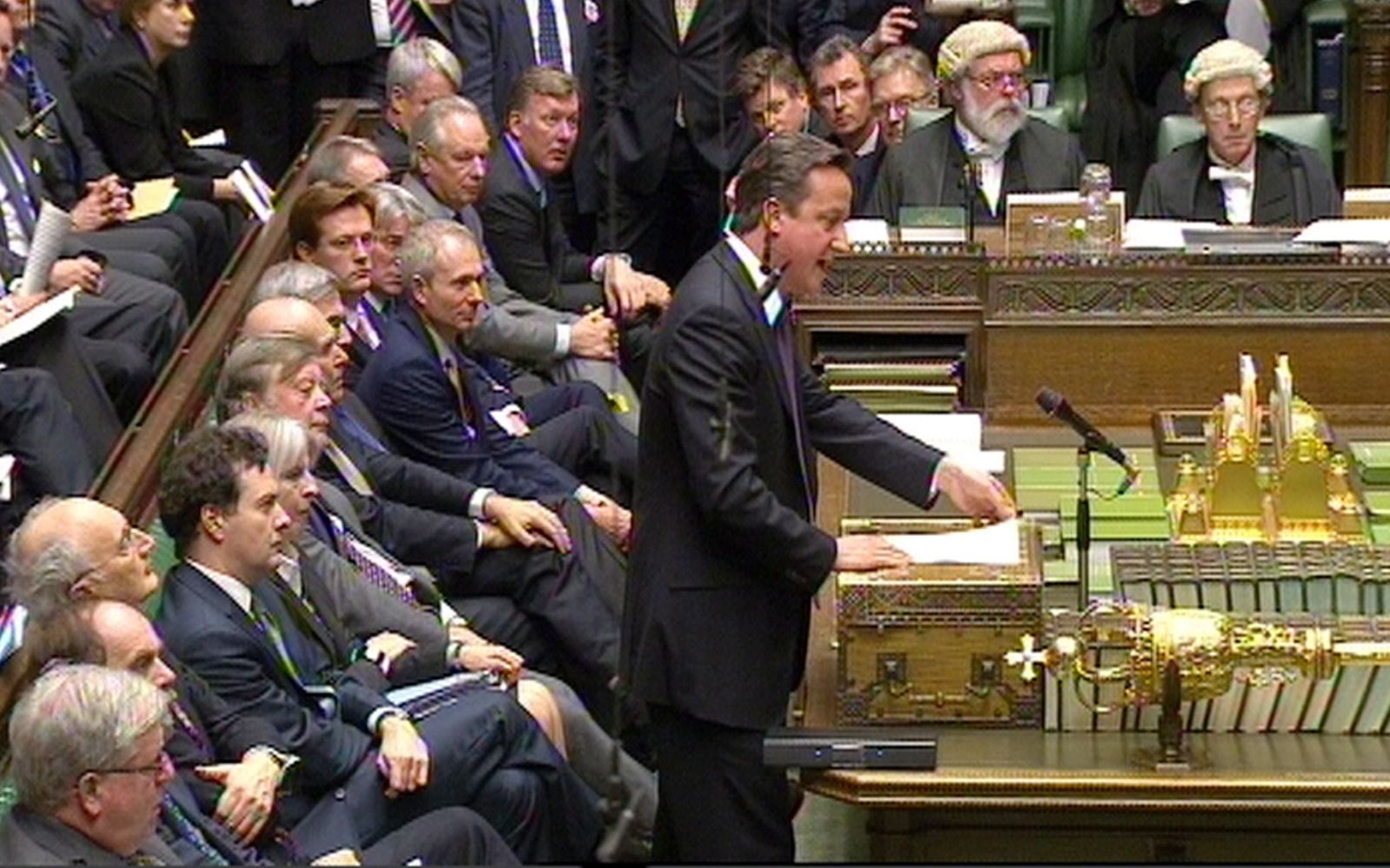 British Prime Minister David Cameron addressed the House of Commons on Monday to defend his decision to veto a tighter EU fiscal union.