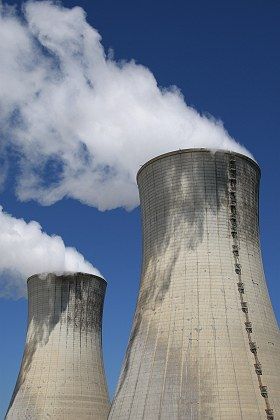 Events this week have had an equally ambivalent tone. At the G-8 meetings in Japan, Chancellor Angela Merkel represented the only major industrialized country in attendance that does not support the use of nuclear power as a way to address climate change. Respecting the diversity of thought, the leaders' joint statement on environmentand climate change issued Tuesday called for a goal of 50-percent reductions in greenhouse gas emissions, but it stopped short of endorsing nuclear energy. It said only: "We witness that a growing number of countries have expressed their interest in nuclear power programs as a means (of) addressing climate change and energy security concerns."

As chance would have it, on the same day the statement was released, officials in France were reporting that radioactive material had leaked into the ground and two rivers near the Tricastin nuclear facility located 40 kilometers (25 miles) from Avignon. A tank containing a solution with traces of non-enriched uranium was reportedly being cleaned, and the reservoir collecting it overflowed. Local authorities responded immediately by imposing bans on swimming, water sports and fishing in contaminated waters as well as on using it for drinking water or crop irrigation. France's nuclear safety agency tried to calm nerves by saying that the substance was only slightly radioactive, though nevertheless toxic.

In the ensuing uproar, the facts have been a bit slippery, too. French nuclear giant Areva, whose Socatri subsidiary operates the facility where the leak occurred, has lowered its estimate of the leaked solution to 18,000 liters (4,755 gallons) -- down from the 30,000 liters (7,925 gallons) that they first suspected of losing. The company also announced late Wednesday that the leak took place late Monday night rather than early Tuesday morning.

The incident sparked a national outrage in France and angered residents and environmental organizations, and distrust has grown after officials downplayed the seriousness of the event. The mishap also has the potential to make people and countries that are now re-embracing nuclear power have second thoughts.

German commentators predictably fall on both sides of the issue, depending upon the general political leanings of their newspapers.

"The Tricastin nuclear power plant was missing a piece of equipment used to trap spilling liquids. Technically speaking, it's something very basic that every gas station has.  Accidents like the one in Tricastin shouldn't happen."

"The accident's timing is explosive. Just a few days ago, German Chancellor Angela Merkel stood out in the crowd at the G-8 summit in Japan because Germany is one of the only large industrialized nations that has rebuffed the renaissance of nuclear energy"

"Whoever wants to take advantage of nuclear energy cannot only talk about the technology's advantages, such as the low-cost electricity and the relatively small amount of greenhouse gases arising from its production. Reactors and the associated industry conceal serious risks. Accidents like the one in Tricastin significantly damage the credibility of the backers of atomic energy, who are usually quite fond of saying that the West has everything under control."

"The issue of atomic energy has always driven -- and is once again driving -- a wedge between Germans. ... It is high time for a phaseout of the (German government's legally mandated phaseout of nuclear energy) because it would be ecologically and economically negligent to tear down technological bridges that Germany needs now more than ever."

"There's no arguing that there are particular risks associated with the production and disposal of atomic energy. One need only think of the mishap that happened on Wednesday at France's Tricastin nuclear facility."

"At the same time, though, the overall security situation with Germany's reactors continues to be very good. It's so good, in fact, that local production has always been preferred over importing nuclear energy from neighboring countries"

"The authorities first told the public about the accident half a day after it happened. It was almost a completely normal nuclear accident: cover up, deflect, stall. Those are the industry's tried-and-true methods."

"As usual, a catastrophe is the nuclear energy industry's standard operating procedure. And it's not just the fact that nuclear reactors constantly emit radioactivity into the air and the water. In this case, it's worth taking a closer look at the uranium that all nuclear power plants use as fuel. When it comes to France, a third of its uranium comes from Niger, where it is mined using strip mining and underground mining, just as Wismut AG used to do in the eastern German states of Thuringia and Saxony. The company left thousands dead or ill with cancer. Uranium mining in Germany was shut down for a good €6 billion ($9.5 billion), and the long-term effects were contianed in so far as possible. Taxpayers bore the expense. Some may be interested in Africa about the waste and emissions from the mines in Niger, but the producers and consumers of electricity in the countries that purchase the uranium couldn't care less about them -- not even with the knowledge that the waste will still be emitting radioactivity a few thousand years from now. That is the lasting failure and the lasting scandal."