Public anger over Hungary's new constitution and a raft of other new laws may be the least of Prime Minister Viktor Orban's problems. Financial markets, it turns out, are just as wary -- and could drive the country to the brink of insolvency.

The European Commission on Tuesday announced that it was combing through both the new constitution, which took effect on Jan. 1, and a new law pertaining to Hungary's central bank, the Magyar Nemzeti Bank (MNB), to determine if they adhere to European Union treaties. Furthermore, the Commission said on Tuesday that the EU and the International Monetary Fund (IMF) have not yet decided whether to resume negotiations over much-needed financial assistance for Budapest.

It didn't take long for markets to react. Yields on 10-year Hungarian bonds spiked to 10.7 percent on Wednesday, continuing a sharp rise since the talks over a €20 billion ($26 billion) EU/IMF aid package for Hungary collapsed in December. The country's currency, the forint, plunged to an all-time low against the euro on Wednesday morning. Both Standard & Poor's and Moody's slashed Hungary's credit rating to junk status in the weeks before Christmas. Hungary needs to refinance debt worth €4.8 billion in the coming months.

The aid talks were broken off due to concerns about new laws regulating the central bank, pushed through by Orban's center-right Fidesz party, which controls two-thirds of the seats in parliament. Of particular concern are provisions which allow the government to appoint the bank's vice presidents, thus infringing on MNB's independence. Furthermore, the law increases the number of vice presidents from two to three, allowing Orban to appoint one immediately. In addition, the committee which sets monetary policy has been expanded, with new members to be appointed by the Fidesz-run government.

Potentially more damaging, however, is the fact that the new constitution grants parliament the right to merge the central bank with a financial oversight authority, the head of which would then be appointed by the government. Were the Orban government to take advantage of the provision, it would mean that the supposedly independent central bank president would have to answer to an Orban-appointed superior.

European Commission President Jose Manuel Barroso "exchanged many letters" with Orban over the Christmas holidays prior to the central bank law's passage, according to the Commission's Tuesday statement. On Wednesday, the Commission received the official English copy of Hungary's new constitution and the central bank law. EU legal experts are examining them to see if they are in violation of EU treaties. "We will see if the concerns that we voiced prior to the law's passage were taken into account," a Commission spokesman said on Tuesday.

The laws pertaining to the MNB aren't the only cause for concern. Tens of thousands of Hungarians took to the streets of Budapest on Monday night to protest against several provisions of the new constitution, including significant infringements on the independence of the judiciary. Not only have the powers of the country's Constitutional Court been limited, but the public prosecutor may now choose which judge he wants to hear a case.

Many have said that the new constitution also weakens legal protections for minorities. And the number of recognized religious denominations in the country was dramatically reduced, with Islam, Buddhism, Hinduism and several Christian denominations all losing their tax exempt status. The EU has also voiced concern about a new flat tax anchored in the constitution. The word "republic" was also struck from the country's official name.

Orban's spokesman, Peter Szijjarto, said on Wednesday that Budapest was willing to consult with the European Commission on the new central bank laws once the EU has finished its analysis. German commentators on Wednesday take a close look at the situation in Hungary.

"Hungary is distancing itself from all that Europe stands for: democracy, the rule of law, the separation of powers and human rights. It is thus high time that the European Union increases pressure on Budapest -- not just legally, but also politically."

"That the European Commission is now examining whether Hungary's reforms are in violation of EU law is a good start. But it won't be enough, even if the Commission is likely to find problems immediately: The Constitutional Court has been robbed of its power because it no longer has jurisdiction over financial questions, the media now operates under government supervision, the central bank will have to bow to politics, and parliament, thanks to changes in quorum rules, will no longer have much of a say. It is a case of a governing party seeking to cement its power and to rob its successor -- and the entire country -- of the opportunity to pass future reforms."

"Europe's politicians must finally have the courage to openly criticize Hungary's government and to increase political pressure on the country with all the means they have at their disposal. Nothing less than the protection of European values is at stake."

"Hungarian Prime Minister Viktor Orban is pursuing a dangerous course. Does he really believe that his comparatively small country, which has just 10 million inhabitants, can go it alone? He is putting talks with the IMF and with the EU about a new multibillion aid package at risk. Hungary could soon be paying dearly for the fact that Orban has led his country into economic and political isolation."

"In terms of legal certainty, (the situation in Hungary) leaves a lot to be desired. Orban should therefore not be surprised that foreign investors, reacting to Hungary's economic polices, are turning their backs on the country."

"Hungary's prime minister has shown himself to be combative and determined; those who attack his policies are enemies of the Hungarians, enemies of the nation. He is a man who can hardly be toppled with democratic means. Parliamentary rules have already been set aside to such a degree that the government, supported as they are by the right-wing Jobbik party, can introduce and pass legislation without floor debate. In addition, the prime minister has installed his own people in so many key positions that there is hardly any remaining resistance from within the government. Optimists believe it is possible that Fidesz could split or that Orban could resign under pressure from Hungarian business leaders, but that is not considered to be very likely."

"It is the young people, the educated, the middle class and the business people who have found themselves united in protest. And it is the intellectuals who, with increasing pessimism, are asking whether democracy can be saved. The desperation of those who want to see an end to Orban's rule is growing in parallel to their hope. Every week, more people are joining the demonstrations and -- following a couple of blatant cases of media meddling -- journalists are increasingly defending themselves against state influence. Civil disobedience, flash mobs, hunger strikes, lists of signatures, open letters -- the opposition is forming. Some are hoping for help from Brussels. But criticism from the US and the EU has so far been ignored. And most know that it is the masses, the street and the majority that must overthrow the new system. They are now hoping for a peaceful counterrevolution."

"It is exaggerated to compare Viktor Orban to (late Austrian right-wing populist) Jörg Haider. There are currently no political attacks against synagogues, homosexuals or Roma. Bad attacks against the latter also happened under the Social Democrat government."

"But the demonstrations against the new constitution also show that the divided opposition is getting its act together and that a spirit of resistance is alive. Democracy is being trampled on in this country. But as long as tens of thousands take to the streets in protest against the government, there is no dictatorship in Hungary. The future will depend on them and on the many small opposition groups and on whether they succeed in defending democracy against Orban." 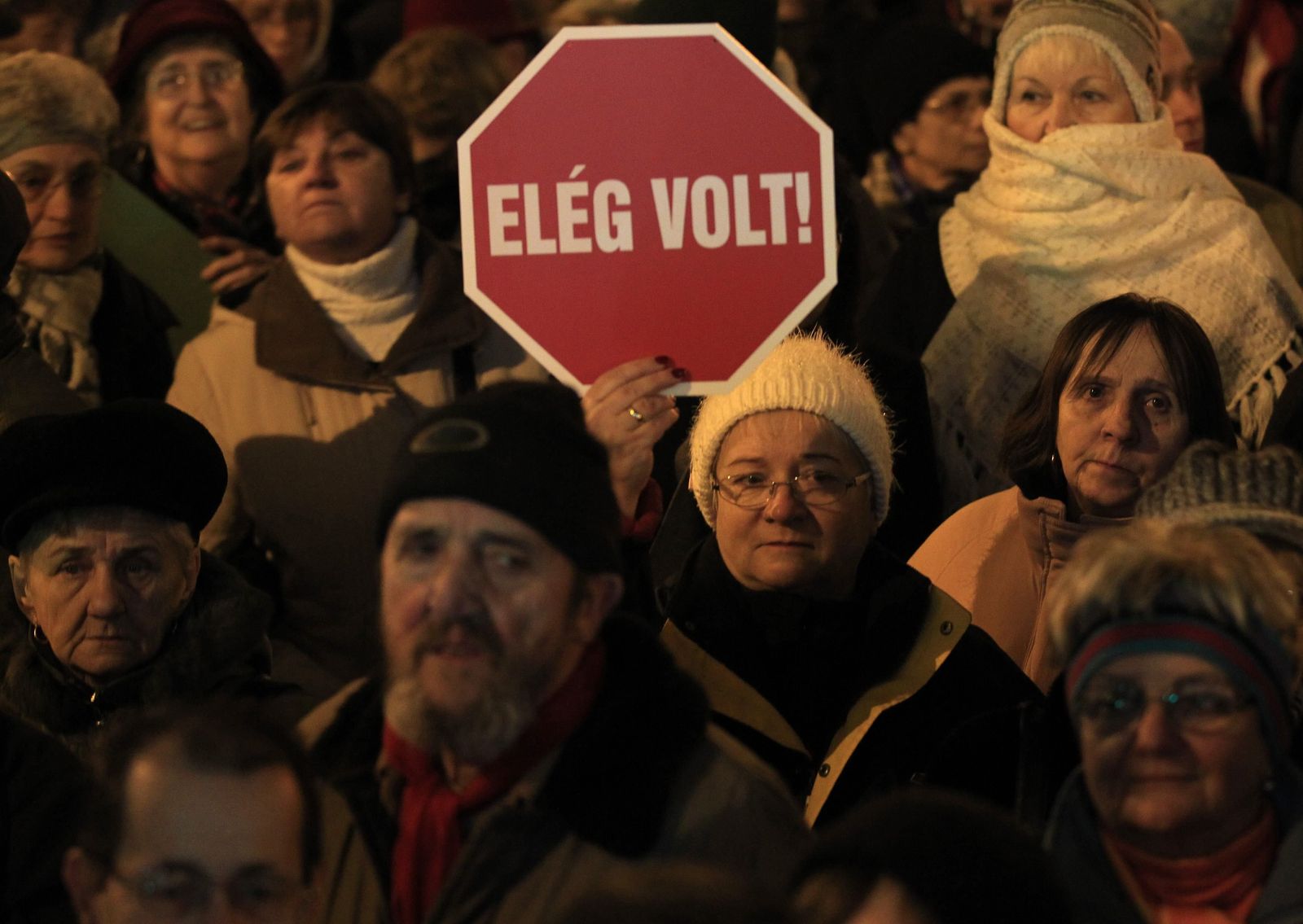 "Enough!" Hungarians have begun taking to the street to protest far-reaching reforms pushed through be Prime Minister Viktor Orban.