Time magazine's naming of "the protester" as its person of the year was certainly apt. The Arab Spring, Occupy Wall Street, anti-Putin marches in Moscow: The last 12 months have been full of surprising, if not always successful, uprisings against seemingly impregnable institutions.

The end of this year will be marked by another. On Dec. 23, the Hungarian green opposition party LMP has called for a march in Budapest. It aims to protest against "the end of democracy" in Hungary, party spokeswoman Bernadett Szel told reporters on Tuesday. It will be "a turning point when a score of scandalous laws are expected to be passed by parliament," she added.

The LMP, it would appear, is not alone in its assessment of the state of Hungary's democracy. Critique of Prime Minister Viktor Orban's right-wing Fidesz party, which has a two-thirds majority in the country's parliament, has been widespread after a year spent pushing through a raft of controversial laws aimed at solidifying his party's control. Media, churches, the judiciary and even the Hungarian central bank are all to be more tightly controlled by Fidesz officials in government.

As if timed to show exactly what this means for the country, Hungary's media council on Tuesday withdrew the frequency from independent radio station Klubradio, described as the country's "last opposition station." The move had been expected as the station's use of the frequency had been up for renewal and the media council had drawn up a list of conditions that seemed designed to ensure the Klubradio's application would be rejected. Such intensified attempts to control the media have also resulted in a recent hunger strike by the journalists of public broadcaster MTV.

Still, there have been some attempts to slow the rapid erosion of democratic checks and balances. Hungary's Constitutional Court on Monday threw out parts of Orban's controversial media law, scrapping measures that called for print and online content to be examined for conformance with aspects of human rights, dignity and privacy. Passages limiting the degree to which journalists could protect their sources were also removed.

Attack on the Central Bank

The court also rejected a new law dealing with churches in the country, which drastically changed rules regarding what could qualify as a religious organization -- and would have left Anglicans and Methodists, for example, out in the cold. The law was struck down due to last minute changes which did not allow for sufficient debate in parliament. The Constitutional Court also annulled a law which would have allowed public prosecutors to choose which court they wanted to try certain cases.

That's the good news. The bad news is that, with such an overwhelming parliamentary majority, Fidesz has anchored many of these controversial measures -- including provisions that will significantly limit the power of the country's Constitutional Court -- in a new constitution which is set to take effect on Jan. 1.

Meanwhile, Orban's legislative frenzy appears to be ruffling feathers with the European Union once again. European Commission President Jose Manuel Barroso has reportedly written to the Hungarian prime minister asking him to withdraw a proposed law which some say would threaten the Hungarian central bank's independence. "I would forcefully advise you to withdraw two pieces of cardinal law now in front of parliament," Barroso wrote, according to the Hungarian news website origo.hu.

The law would change the bank's management structure and also that of the committee which sets interest rates. Both the EU and the IMF, in Budapest to negotiate measures to help insulate Hungary from the euro crisis, left abruptly last week due to concerns about the law.

Few expect Orban to capitulate in the face of such outside pressure. Indeed, on Tuesday, the national daily Magyar Hirlap reported that Orban had told Fidesz parliamentarians to expect more "attacks" from abroad. The paper quoted the prime minister as saying "we should finish what we have started."

German papers on Wednesday take a closer look at the recent Constitutional Court rulings and what Orban's tightening grip means for Hungary.

"Several thousand people took to the streets in autumn to protest the media law. The Constitutional Court verdict will strengthen the underdeveloped portion of Hungarian civil society which is concerned about genuinely democratic structures. Whether it will have an effect in any legal sense is another question. Because the court's days are numbered."

"On Jan. 1, a new constitution -- one full of sesquipedalian nationalist and religious rhetoric -- enters into force. It will transfer too much authority from the realm of law into the control of the parliamentary majority and the government. The Constitutional Court will be pared down and reformed. Respected justices are to be sent into early retirement, the court will be enlarged and filled with Orban's party allies."

"Orban's Fidesz, according to all respectable polls, has lost the support of roughly one million of the two-and-a-half million who voted for him in 2010. That isn't, however, particularly encouraging to Hungarians with a democratic frame of mind. Because the largest portion of the defectors have turned even further to the right to the openly fascist party Jobbik. It is today the most vocal opposition party in parliament, ahead of the divided Socialists and muted Greens. As such, Orban's plan is failing. He wanted to keep the far right at bay by implementing many of their policies. But Hungarians value the original above the copy. Many see Orban as the lesser of two evils."

"The Constitutional Court verdict could prove to be the last twitch of the rule of law in Hungary. The new constitution taking effect on Jan. 1 will turn the verdict into a waste of paper. On the day before Christmas Eve, the Orban government plans to push through new parliamentary rules. In the future, laws pushed through according to rules governing accelerated passage will require just a two-thirds majority -- which Orban's Fidesz has -- instead of four-fifths. In addition, speaking times are to be limited, allowing just 15 minutes per opposition party. The result is that parliamentary debate, the fundamental element of every democracy, will be rendered meaningless. In addition, the contrarian Constitutional Court is to be enlarged and reformed, and will likely hand down verdicts more to the government's liking in the future. Such measures have led Orban critics to justifiably claim that he is eliminating the separation of powers. And they mean that the new year will begin as did the old one: with democratic deficiencies in the EU member state of Hungary."

"The Constitutional Court's verdict is to be welcomed. But there is bad news. The verdict was the court's last convulsion as an independent institution within the system of separation of powers. From Jan. 1, 2012 onwards, the new, Orban constitution takes effect. ... As such, the government can serenely ignore the ruling."

"Why the Constitutional Court justices -- who have not thus far distinguished themselves with their eagerness to pass rulings -- have now shown courage in the last second is not easily interpreted.... It could be that these people, who soon will no longer have anything to say, wanted to stand up to Prime Minister Viktor Orban, who is already weakened by the economic crisis anyway."

"But there is another possible interpretation, which holds that the verdict -- as with all other decisions so far -- was cleared with Orban and is meant as a signal to Hungary's partners abroad that Hungary is still a country ruled by law. After all, even the EU protested Hungary's limitation of press freedoms when the media law was passed. In any case, the right-wing nationalist Fidesz, which has consistently held up the media law as a pearl of democracy, was informed prior to the verdict and was not surprised. But even if the law must be altered, Orban has no need to worry. The government is not dependent on the law for a supportive media environment." 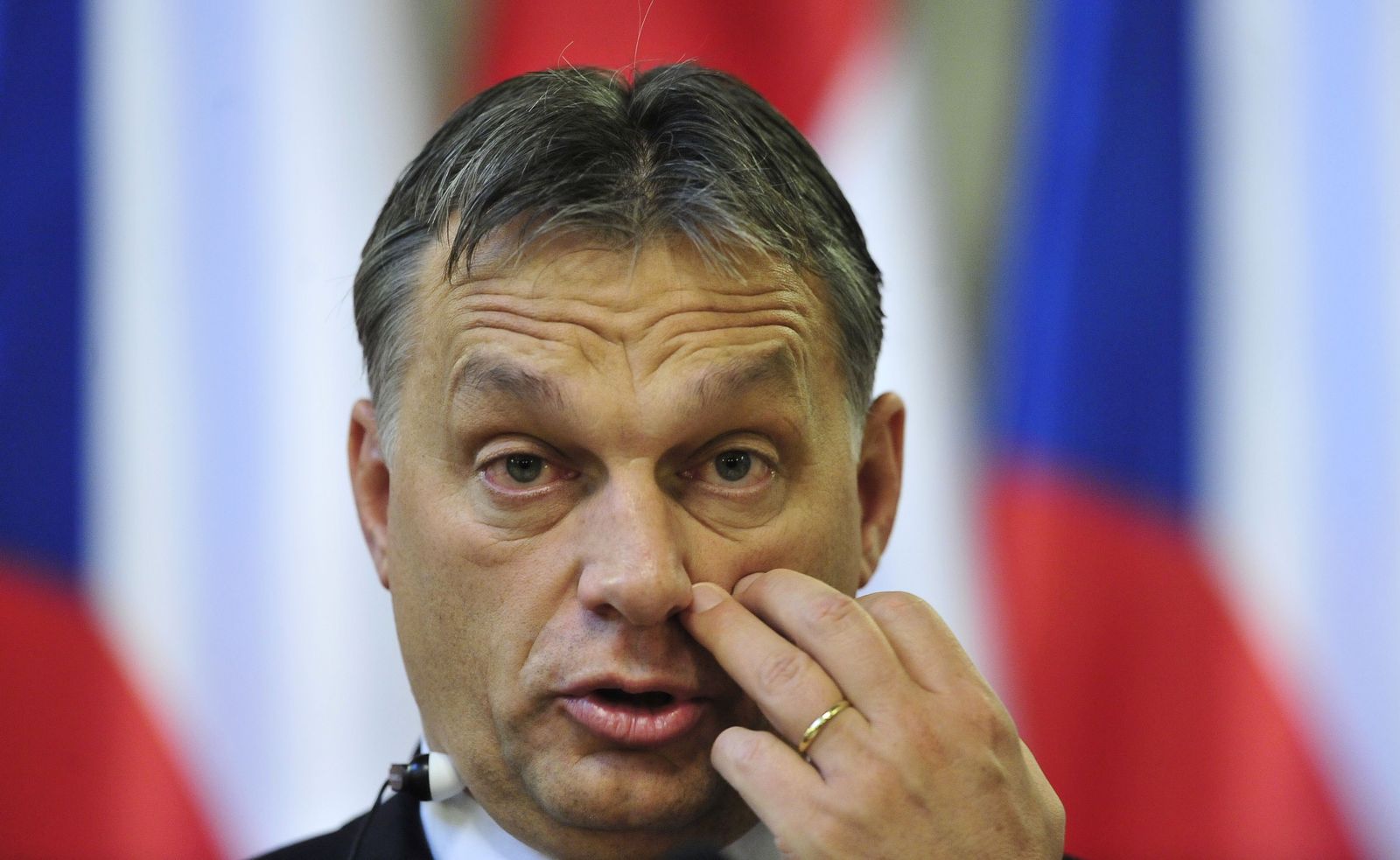 Hungarian Prime Minister Orban's Fidesz party is strengthening its control over the country.