It certainly wasn't news the world's financial markets had expected or wanted to hear. On Friday, Asian stocks became the latest to tumble on the news that the European Central Bank (ECB) would not be buying up more large chunks of government bonds. Investors had been counting on such a move to help ease the euro zone's debt crisis.

But ECB president Mario Draghi said late on Thursday at a crucial summit of European leaders that the bank did not anticipate increasing the scale of its bond interventions, which would have kept borrowing costs down for weaker countries like Italy and Spain.

In a sign of rising concern over the debt crisis, however, the ECB also announced a cut in the base interest rate to 1 percent, as well as several other measures to bolster Europe's economy and financial system. Banks can now borrow unlimited amounts of ultra-cheap money for up to 36 months and rules on collateral for these loans will be loosened by making lower rates on mortgages and bank loans acceptable. Rules on how much capital banks must hold in reserve with the ECB were also relaxed, which will free up the banks to lend and invest more.

But the package was met with little enthusiasm. Stocks fell heavily alongside the euro, while borrowing costs for European governments rose. Based on comments Draghi made in a speech last week, many had hoped that the ECB was prepared to ramp up its purchases of European government bonds as the euro zone continues to slide toward recession. But on Thursday he said the bank had no explicit plan to do so and was "surprised" by the way his remarks had been interpreted.

Speaking at a news conference, Draghi dismissed the notion of the euro zone being broken apart by the debt crisis as "far-fetched" and stressed that market confidence in the 17 euro-zone countries would increase if leaders at a European Union summit in Brussels agreed to a credible plan to enforce budget discipline.

Such a plan was "the most important precondition for restoring the normal functioning of financial markets," Draghi said.

It remains to be seen whether the plan agreed upon at the summit late on Thursday night will suffice. Following marathon talks on Thursday night, European leaders failed to agree on changes to the EU treaties, with Britain opposing the plans. Though 23 out of 27 EU countries still agreed to back their own pact for greater fiscal discipline and tougher controls, observers fear this could lead to a split in the EU.

Leaders are meeting again on Friday to hammer out the details of the new agreement, with a host of legal difficulties expected.

German commentators Thursday analysed whether the ECB's course of action was correct:

"Draghi is doing everything possible to minimize the particularly sensitive issue of the unlimited purchase of government bonds. He emphasizes with almost the same words as Bundesbank president Jens Weidmann that the wording in the Lisbon Treaty and the spirit of the European treaties prohibit a monetary financing of governments and that the ECB will abide by the rules. Also, on the question of possible evasive transactions over the International Monetary Fund, Draghi is in line with the Bundesbank."

"But at the same time, the new president is pushing up the pace of rate cuts as well as bailouts for the banking system in comparison to his predecessor Jean-Claude Trichet -- at the expense of a fierce dispute in the European Council. There may be reasons for the second rate cut in two months. The rate of inflation is projected to go down again from 3 percent to the inflation target of just below 2 percent within six months. It should continue decreasing afterwards, at least according to the ECB forecasts. However, the inflation forecast for 2013, at 1.5 percent, is not as low as many central bankers had previously thought. It would therefore have been absolutely possible to first monitor the further economic trends, especially as Draghi's assessment contains no threat of deflation at present."

"The majority of the council, however, defied such objections, which was also shown in the vote on extending emergency aid to banks. … If the ECB under Draghi continues down this path, it could have the same risky consequences as the purchase of government bonds and could threaten the cohesion of the monetary union."

"The outlook for the euro zone is bad. Anyone who didn't yet believe that needed only to look at the package of measures agreed to by the European Central Bank (ECB). The monetary authority not only lowered the key interest rate to an historical low of 1 percent, but in order to stabilize the shaky situation in the financial sector, the ECB has come to the aid of the banks, granting them liquidity for a period of three years. That the collateral which the banks must lodge for these loans has also been reduced is a sign of how bad things in Europe have really become."

"What Europe needs is a package of short-term measures that can help bridge the liquidity problems of the crisis countries, coupled with a medium- to long-term adjustment program leading to economic growth. This means that the affected countries must reform their economies and labor markets so that wages and costs are reduced considerably. Companies in these countries will have to lay off hundreds of thousands of workers in order to become competitive internationally. The ECB has acknowledged the problem more clearly than many in the German government; the time frame of their measures for the banking sector shows that clearly."

"Many investors may be disappointed by Draghi's public assertion that the central bank will not buy up unlimited government bonds from the countries in crisis. But that is not surprising. For one thing, it is not urgently necessary. Europe's biggest worry, Italy, has a couple of weeks before it has to inundate investors with cash. Besides, the markets have been relatively calm recently."

"And another point: If Draghi had announced a plan to buy up the bonds, then Europe's leaders, meeting at their crisis summit, would have probably thought that they could yet again put off finding a solution for the euro crisis, because the ECB would take care of things. Unfortunately, Europe's leaders have proven over the past few months that they only enact necessary reform when they are placed under extreme pressure. That this pressure is now coming from the ECB, and not just the markets, is not a bad thing."

"Mario Draghi and Angela Merkel are the key figures in the euro debt crisis, and even when it doesn't look that way from outside, the Italians and the Germans are trying to maintain a tricky balancing act. They must contain the crisis, and at the same time convince the other partners to accept a fiscal union with stricter conditions. To do so, significant pressure has to be maintained on investors…"

"Even if Draghi didn't want to hear this interpretation yesterday, a game of back and forth between the ECB chief and Merkel and Sarkozy seems to be looming. Together the German chancellor and French president are pushing through a harsh fiscal pact, and then the ECB will help fill in the gaps until the governments agree on treaty changes and all euro countries have voted on them."

"In the end, there could be a currency union that is much more stable than the current situation. But it is a dangerous game. For the next year or more, Draghi must accept the risk that the currency union could break apart with a loud crack, possibly sparking a global financial crisis that would make the Lehmann Brothers bankruptcy fallout look harmless. This is because there is no guarantee that the politicians can deliver their end of the informal deal." 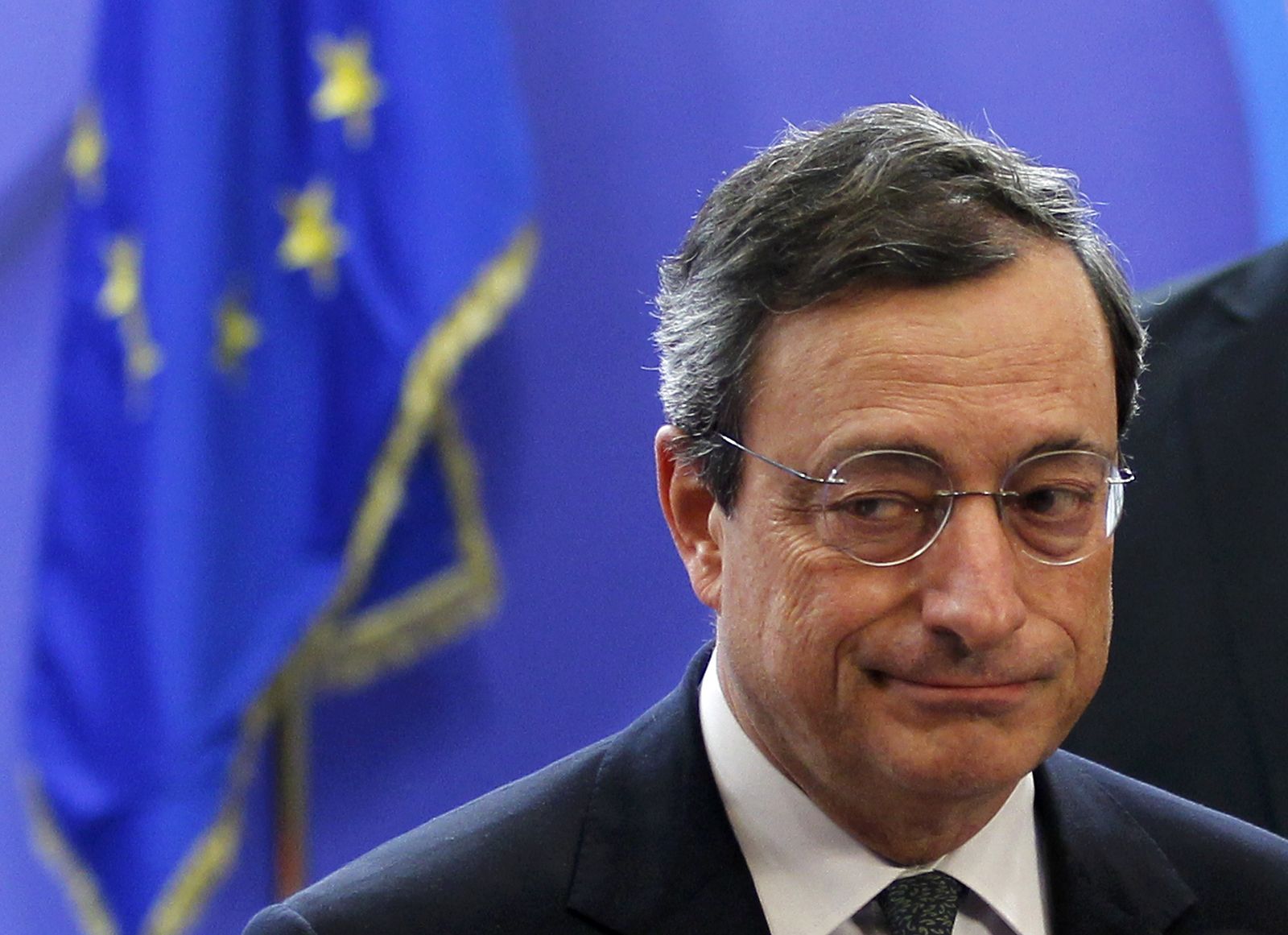