At first glance, the euro-zone finance ministers' agreement on a new bailout for Greece seemed like a decisive step that would save the country from default. Politicians had no shortage of praise for the deal, reached in the early hours of Tuesday morning after marathon talks in Brussels.

The rescue package would "secure Greece's future in the euro area," said Luxembourg Prime Minister Jean-Claude Juncker, head of the Euro Group, while Greek Prime Minister Lucas Papademos described it as a "historic day for the Greek economy." The euro leapt in value in reaction to the news, climbing above $1.32.

But as analysis of the deal began, concerns over its effectiveness also started to grow. Many observers see the rescue package's targets as overly optimistic. There are doubts that Greece will really be able to get back on track for growth and reduce its public debt from the current level of over 160 percent of gross domestic product (GDP) to the target of 120.5 percent by 2020. Similarly, many fear that the €130 billion ($172 billion) in aid that the package contains will not be enough.

There was more bad news about the Greek economy on Tuesday. According to a draft law posted on the parliament's website, the Greek government now expects the country's budget deficit to reach 6.7 percent of GDP in 2012, instead of the original target of 5.4 percent. The figure had been readjusted because of the "bigger than expected recession of the Greek economy," the draft law read, as quoted by Reuters. The news is likely to increase doubts as to whether Greece will be able to reach the long-term goals set down in the second bailout.

The size of the International Monetary Fund's contribution to the bailout also remains unclear. The fund has indicated that it wants to provide less than the one-third of the total it provided in previous euro-zone bailouts. IMF head Christine Lagarde said the board would decide in mid-March. It would, she said, take into consideration "additional matters such as the proper setting up of a decent firewall." The IMF wants the size of the euro backstop fund to be increased, something which Germany remains opposed to. EU leaders will discuss the issue at a summit in early March.

The Greek government is also under huge time pressure. It has just over a week to push through austerity measures worth over €3 billion that are preconditions for the bailout and which need to be completed by the end of February. These include reforms to reduce tax evasion, labor market reforms to cut wages and the opening-up of the country's protected professions, as well as getting at least two major state-owned companies ready for privatization by June.

It also remains to be seen how many private holders of Greek debt will sign up for the -- allegedly voluntary -- bond swap, which is expected to reduce Greece's total debt by €107 billion, from the current level of over €350 billion. On Thursday, the Greek parliament will vote on the private-sector debt haircut, which is a precondition for the release of the loans in the new rescue package.

A further factor causing concern is the widespread opposition in Greece to the austerity measures imposed by the troika of the European Commission, IMF and European Central Bank. On Wednesday, more protests took place in Greece as trade unions called rallies. There were fears of more violence such as the country saw last week in some of the worst rioting in years.

One important observer made its feelings about the new rescue package abundantly clear on Wednesday. The ratings agency Fitch lowered its assessment of Greece from CCC to C as a result of the proposed debt swap. The new rating shows that it considers a default to be "highly likely."

"For more than two years, Europe's leaders have been promising to save the euro, whatever that takes and whatever the cost. In Greece, however, the billions in loans from the first bailout have not improved the situation. They only bought time, but this time was not used. Now, the country's bankruptcy is being postponed again with the next €130 billion package of loans. Private-sector holders of Greek bonds ... are being forced to lose more than half of their capital. Nevertheless, the debt haircut is being praised as 'voluntary.'"

"This marks a turning point. A country in the monetary union is having its debt restructured, but is being allowed to keep the euro. It can also take pleasure in having half of its debt (held by the private sector) written off, and note with satisfaction that the size of its loans has been doubled and the interest payments on its debt lowered. Any normal borrower might be tempted to think that it seems like a recipe for getting further into debt."

"The expensive new loan program for Athens almost collapsed recently, when it became clear that the money will probably not be enough -- yet again -- because the Greek economy is in ruins. If companies don't produce anything, they can't pay any of the many new taxes. The reform package is intended to help the country's firms regain competitiveness by reducing wages. But that's not enough. The companies also need credit again -- the bled-dry banks are not helping them in that respect. Therefore, the debt haircut is of vital importance for Greece's battered economy."

"Greece is still a long way from finding a route out of the crisis, and it will take a long time. (…) Almost 70 percent of Greeks want to keep the euro. But the majority is also against the bailout, which reduces unemployment benefit to a pittance and slashes the minimum wage. If the Greeks' massive efforts are to succeed, then it would probably be a good idea if the sacrifices that many Greeks have so far made for their country were to be appreciated -- both inside and outside Greece. The fact that this has not really happened so far is part of Greece's despair."

"The Greeks -- and all Europeans -- have been rescued from a default in March. Is it a good outcome? No. It is merely a result that reflects the logic of negotiations: The longer they go on, the more the desire to give in grows. And if, on top of that, you ignore reality, then almost any self-imposed target seems achievable."

"Those who were involved in the long nocturnal talks in Brussels negotiated along the lines of what was desirable, driven by the hope that what is necessary can become reality, namely that Greece will return to an economic and fiscal course that will make the country into a European partner and not merely the beneficiary of Europe's solidarity, which is wearing thin. The politicians involved ignored the warnings of their own experts, who cautioned that the two goals -- of streamlining the state and achieving growth -- could be mutually contradictory."

"Why, then, did they bother with the exercise? One has to take into account the finance ministers' fear that the risk of contagion has not yet been overcome. They were also motivated by their humanity: The population in Greece has been experiencing such hardship as a result of austerity that they can expect sacrifices in return. Nevertheless, the billions in taxpayers' money would have been better invested in helping Greece make a fresh start after a default. The finance ministers have probably changed the future shape of the euro zone and the EU in a more far-reaching way than a Greek insolvency would have done. This new monetary union is built on hope and on permanent financial support -- and is therefore based on an imbalance of power between the strong and weak. Neither Europe nor Greek society can tolerate that in the long run. A glance at Athens' streets today is enough to show what can happen when weakness is combined with the feeling of being dominated by foreign powers."

"The second aid package for Greece is based on more realistic assumptions than the first, increasing the chances that the targets will be reached. But the fact is that the Europeans have not yet faced the whole sad truth about Greece. Euro-zone leaders are behaving as if they can precisely plan what Greece's debt ratio will be in 2020 down to the first decimal place -- namely 120.5 percent of GDP. That is obviously a joke. Nobody can predict exactly when the Greek economy will emerge from recession and how much it will grow by 2020."

"There are also doubts about the second key figure of the new aid package for Greece. The government in Athens will receive another €130 billion in loans from its European partners and the IMF for the period until 2014. After that, the country is supposed to be able to refinance itself on the markets. Whether it will succeed in doing so is anyone's guess. From today's perspective, it looks unlikely. Perhaps the private-sector haircut will not be enough in the end. Perhaps debt relief from the public sector will also be needed. Germany and other donor countries should in any case prepare themselves for the eventuality that they might need to write off a portion of their claims on Greece."

"From a German point of view, that would not only be economically but also morally justified. After all, Germany also benefited once from public-sector debt relief. At the start of the 1950s, the US wrote off a large part of Germany's war debts, making Germany's famous 'economic miracle' possible. Back then, of course, strategic interests lay behind that decision. That is also the case today, even if those interests are different. And that applies particularly to Germany."

"The Greeks won't be spared one bit: The state will make further cuts, and wages will sink along with pensions. The only thing that will rise is taxes. But while the Greeks face a sad future, the euro zone is taking a step forward. Its problem wasn't a single country's misbehavior, but rather the fact that Greece isn't a special case. Every country in Europe has taken on billions in new debt and been deemed unstable by the financial markets. It's for this reason that the danger exists that the 'Greek virus' could spread to other countries and destroy the euro zone."

"The new rescue measures reduce this danger. The other countries get time to demonstrate that they're safe places to invest. Europe gets time to put together new bailout funds. In short: Europe has bought itself time to isolate its Greece problem. But the Greeks' own problems are just beginning."

"Who's actually being rescued? Certainly not the Greeks. They will soon have to live with substantially lower wages, reduced worker protections, worse health care and a massive sale of state assets. That's what the international troika wanted, and Finance Minister Wolfgang Schäuble and his colleagues forced it through with lots of threatening and often injurious gestures. … It was an inconsiderate diktat, not a generous offer of help."

"From the beginning, Berlin has emphasized only austerity and contraction -- when Greece urgently needs investment and growth. Sure, the 'adjustment program' also includes structural reforms intended to help the economy, but it'll be at least two years until they start to take effect. The danger that Greece will descend into political and social chaos in the meantime is greater than ever." 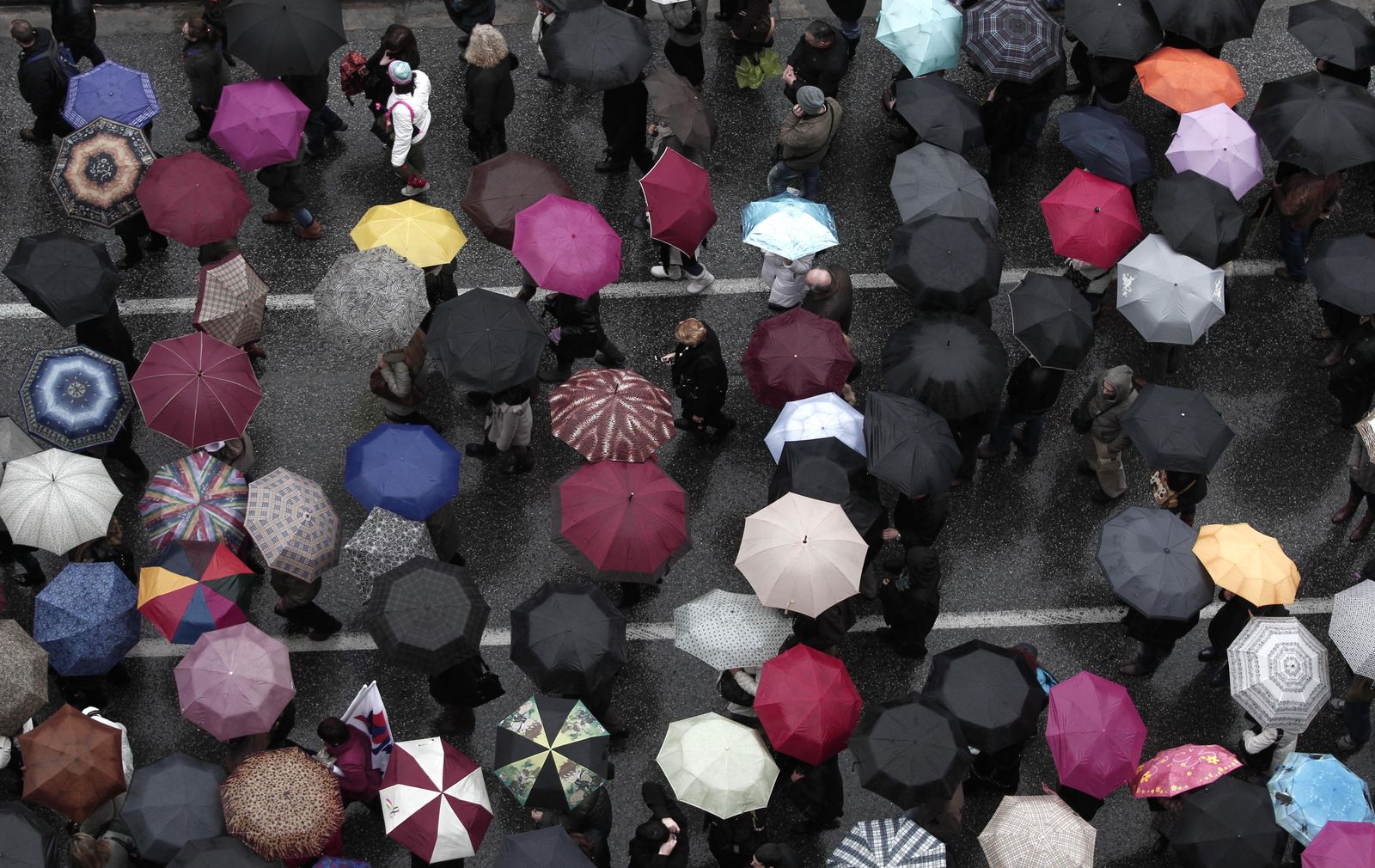 Employees at the state-run Workers' Housing Organization protest in central Athens on Wednesday. The agency is due to be shut as part of the new austerity measures.