European Union leaders battling to solve the euro crisis made some progress on Sunday at the first of their two summits -- there will be a second one on Wednesday -- but German commentators doubt that they will come up with the "big bang" solution everyone is clamouring for.

After 12 hours of at times ill-tempered talks that once again highlighted gaping divisions on how to rescue the currency, the leaders got closer to agreement on bank recapitalization and on how to leverage their rescue fund to try to avoid bond market turmoil following a Greek debt cut. Final decisions were put off until Wednesday's summit and it remains unclear how much of a hit banks will have to take on a Greek haircut -- 40, 50 or 60 percent. 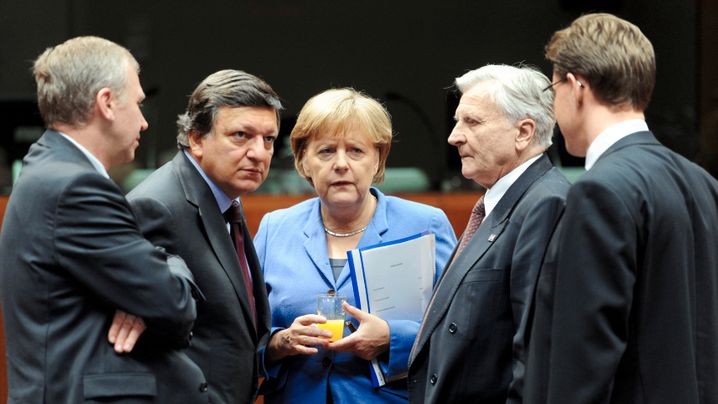 French President Nicolas Sarkozy backed down after German Chancellor Angela Merkel refused to accept his plan to use unlimited European Central Bank funds to fight the crisis by turning the rescue fund into a bank and letting it borrow from the ECB. Meanwhile, Italian Prime Miniser Silvio Berlusconi was told in no uncertain terms to present a more convincing plan this week to boost growth and lower its debt burden.

Leaders agreed on a framework drafted by their finance ministers for recapitalizing European banks, which regulators say need between €100 billion ($139 billion) and €110 billion ($152 billion) to cope with likely losses on Greek and other euro-zone sovereign bonds.

The aim of the meetings is to reduce Greece's debt burden, make European banks more resilient to a restructuring, improving euro-zone economic governance and boost the firepower of the rescue fund, the European Financial Stability Facility (EFSF).

German newspapers on Monday make gloomy reading, with commentators saying that leaders have let the EU down with ther piecemeal approach towards fighting the crisis over the last 18 months: The measures to be decided on Wedesday won't rescue the euro, they say -- it will only buy time for countries to reduce their debt and reform their economies.

"It is crystal clear now that the historic task of saving the world's second-biggest currency can't succeed with the bit-by-bit approach of politicians taking their own national interests into account."

"The report by the inspectors of the troika of International Monetary Fund, European Commission and European Central Bank reads like a horror story. It calls into question all the the previous rescue attempts launched by the Europeans."

"Beyond Greece, far greater problems are emerging, posing the fundamental question of who remains in a position to help whom, and how."

"The EFSF might as well give up unless it is fundamentally rebuilt. The fund is too fragile in its construction and too slow because the decisions on its use are political. Every euro country can veto decisions, and the rating agencies have tremendous influence. If they take the triple-A rating away from heavyweights like Germany, the fund itself would see its creditworthiness downgraded, which would in turn deter investors. Many of them don't even understand the complex structure to begin with."

"The weekend summit has also made clear that the EFSF can only survive if its resources are increased. The question is no longer whether a risky system of financial leverage is necessary. Given the Greek debts and the fragile situation in southern European countries, the question can only be how the fund can be expanded."

"Regardless how much money is mobilized in the end -- it won't rescue the euro. It will only buy time to solve the fundamental problems. The economic drifting apart of the 17 euro nations must be stopped; solid economizing is required. Because time is becoming increasingly expensive, the summit on Wedesday will have to launch real changes. That includes the installation of a powerful independent budget commissioner, as many countries are demanding. Berlin, which is insisting on first changing the EU treaty, is risking allowing the euro's slide to turn into a collapse."

"At least everyone agrees on one issue: the banks will play a key role. They will have to make greater sacrifices for a Greek debt cut. Whether that will be 40, 50 or 60 percent, they won't be able to avoid writing down a large part of their sovereign debt holdings. German banks will be able to cope with that, French banks less so, Greek banks not at all. That is why there will have to be state guarantee for them, regardless of whether that be via the EFSF or another emergency source."

"It would have made sense to provide bank-issued bonds with state guarantees from a European fund. If banks have to hold more equity capital, they will lend less -- and there will be a risk of a credit crunch. The European Investment Bank could have helped to shore up banks unable to raise capital in the market. After the Lehman collapse this worked with some German publicly owned Landesbanken regional banks via the German bank rescue fund Soffin. But for some unknown reason this idea didn't survive the EU summit."

"Now ailing banks will probably be reliant on national guarantees. The question is whether Portugal's banks will still be able to borrow money if the Portuguese government guarantees the repayment."

"Government leaders are now referring to a 'bazooka' with which they want to blast the crisis into oblivion. It's a further mystery of the EU's crisis management how a word like bazooka can help to instil confidence. In Germany at least, the bazooka awakens memories of the last stand, of the 'Volkssturm' ('People's Storm') of old men and children who were meant to turn around a lost war, but bled to death instead."

"The EU hasn't reached May 1945 levels yet. But, staying with the military metaphors, the front at times looked as if it were about to collapse in recent days. It took a lot of effort to get the ranks just about closed again. It would be easy, but cheap just to blame the government leaders for this. Most of them are doing their best grappling with this murderous program -- within the confines set by the European political system which has been exposed in a merciless light by the crisis. Diverging interests, situations, historical experiences, mentalities and styles of government are clashing here. The row between Paris and Berlin about the rescue fund is just one of many examples of this."

"The dispute gives a taste of how difficult it will be to develop the EU into a 'political union.'"

"Anyone hoping that the EU summit will deliver a Big Bang to solve the European debt crisis will probably be disappointed once again. It can't happen because the governments involved have completely divergent opinions of what the new, better Europe is supposed to look like. The French president fought bitterly to give the European rescue fund unlimited access to the money printing press of the European Central Bank. For the Germans with their inherited inflation phobia, that's a horrifying scenario."

"After a year and a half of fruitless rescue efforts, Europe is finally approaching a Greek debt restructuring. Anyone demanding that a year and half ago was labelled anti-European, even by the German government. The rescue of the over-indebted country was pronounced to be a matter of war and peace. But the currency union needs clear crisis management, not grand speeches, to survive. It is disastrous that this is no longer about solidarity between the strong and weak states. The EU has also been subsidizing the borrowing of the Italians and Spanish, who have plenty of their own reserves to get to grips with their homemade problems. If rescuing southern European and French banks is now also to become a common task, this has nothing to do with appropriate solidarity."

"The German government is determined to solve the crisis with 'more Europe.' Fiscal union or even political union are the buzzwords. But the nations still have far too little in common in terms of monetary and fiscal policy for that to be possible. If some countries want to print money instead of making their economies viable through unpopular reforms, the others will always have to foot the bill. The confidence of the public and of markets will only return when all euro members follow the stability rules -- or leave the club."

German Chancellor Angela Merkel and French President Nicolas Sarkozy during a joint press conference in Brussels on Sunday: "The dispute gives a taste of how difficult it will be to develop the EU into a 'political union.'"