Since the US State Department issued an official travel advisory on Sunday warning American citizens of imminent terrorist attacks while traveling in Europe, several other countries have joined in and issued their own warnings.

On Monday, Japan and Sweden joined the US in issuing a travel alert for Europe. The UK also updated its advisory for travelers to Germany and France. While Australia did not raise its level of danger, it did re-issue travel advisories to include a reference to US warnings. Despite the fact that the US advisory has come in for criticism for being somewhat abstract, all of the nations who issued alerts were advising citizens to be vigilant and cautious while travelling. Some American troops based in Germany also had a curfew imposed upon them.

There are fears of attacks similar to those in Mumbai in 2008, where gunmen simultaneously launched assaults around the city. Over 160 people were killed and 300 wounded in the co-ordinated attacks.

Much of the information about the potential terrorist plot appears to have come as a result of the capture and interrogation of an Afghan-born jihadist, Ahmad Sidiqi, in Pakistan. Sidiqi has been a naturalized German citizen since 2001 and used to live in Hamburg.

On Tuesday a US drone missile strike in Pakistan's mountain border area with Afghanistan reportedly killed at least five German militants, who may have been linked to the group of Germans and Britons that is thought to be planning to attack European cities.

'No Reason to Be Alarmist'

The potential threat is being viewed differently in different countries. In continental Europe itself, while security has been heightened at airports, travel hubs and tourist attractions, neither the French nor German governments have raised their current threat levels.

Speaking to reporters Monday, German Interior Minister Thomas de Maizière, of Chancellor Angela Merkel's conservative Christian Democratic Union (CDU), warned against overreacting. Germany's terror alert had been on "high abstract threat" for some time already, and German security services are in daily contact with their American counterparts, he said. "There is no reason whatsoever to be alarmist at the moment," de Maizière, who has made an effort to react more calmly to terrorist warnings since he took office, told reporters.

Writing in German newspapers on Tuesday, media commentators generally felt that the government was adopting the correct attitude, pointing out that one of the prime components in a terrorist's arsenal was fear and that giving in to terrorist intimidation was a form of defeat in itself.

"What the US broadcaster Fox News and other media are putting out to the world as allegedly concrete warnings is negligent and damaging, and the substance is ridiculous. Of course, in Berlin if one wanted to conduct an attack, one wouldn't target a snack bar, but rather the Hotel Adlon, the TV Tower, and the central train station. And maybe a couple of other places, that anyone who knows the city a little would think of."

"The warnings, whose origins and explosiveness have not been proven, reminds one of the terror panic caused by the Bush administration, who, almost on a weekly basis, would raise and lower the alarm levels at their pleasure, accompanied by a great fuss in the media. That's how you keep the population afraid and legitimize a foreign war."

"When security agencies give out warnings without verifiable background, then they make the job easier for those they ostensibly want to fight. Terror is the same as fear, which can come without any attacks. We shouldn't take part in this."

"The German reaction -- relaxed vigilance -- has been the correct one. In the face of these ever-changing scenarios and speculation, the behavior of the German chancellor and the Interior Ministry has been beneficial. Terrorism thrives on the spreading of fear, and level-headedness can be a weapon against the scaremongers."

"The conclusion from Berlin is straightforward: In Germany's opinion, the evidence upon which US officials have based their terror warnings is insufficient (to raise terror alert levels in Germany). Anyway, even if the Germans did conjure up the apparently omnipresent specter of Islamic terrorism, little would change, objectively speaking. People would still use buses and trains. Security services would still work in a highly professional way. And they do that anyway: The security services know far more about Islamist terror groups today than they have known about any other terrorist groups in the past."

"With luck, and due to the expertise of those responsible, terrorist attacks in Germany have been prevented since 2001. And, one must concede, this has sometimes been due to the help from US officials."

"Cry wolf one too many times and you are in the wrong. Don't cry wolf enough and you are also in the wrong. The same goes for terrorism and for terrorist alarms. Terrorism is a fight by a weaker group against a stronger one and one of the terrorists' intentions is the spread of fear, thereby tearing apart the fabric of everyday life -- that is, civilization."

"Back when Wolfgang Schäuble was still Germany's interior minister ..., warnings from the US and from Britain were taken literally. This was not just because of political alliances, but because when it came to electronic surveillance, the Anglo-Saxons were masters in the field ... and they often knew more than anyone else. The current interior minister, Thomas de Maizière, must have reasons for his restrained reaction -- hopefully reasons that are motived by more that just the desire to keep things calm."

"According to the German intelligence service, the terror warnings can be traced back to an Afghanistan-born man with a German passport, who was captured in Pakistan, where he had gone to train as a terrorist. He had talked to interrogators, and pointed to a network of armed individuals based in European cities, the majority of whom were ready to attack."

"In the last few years, the German intelligence services have prevented six terror attacks. Two others fell apart by themselves. Germany cannot expect to always have that much luck." 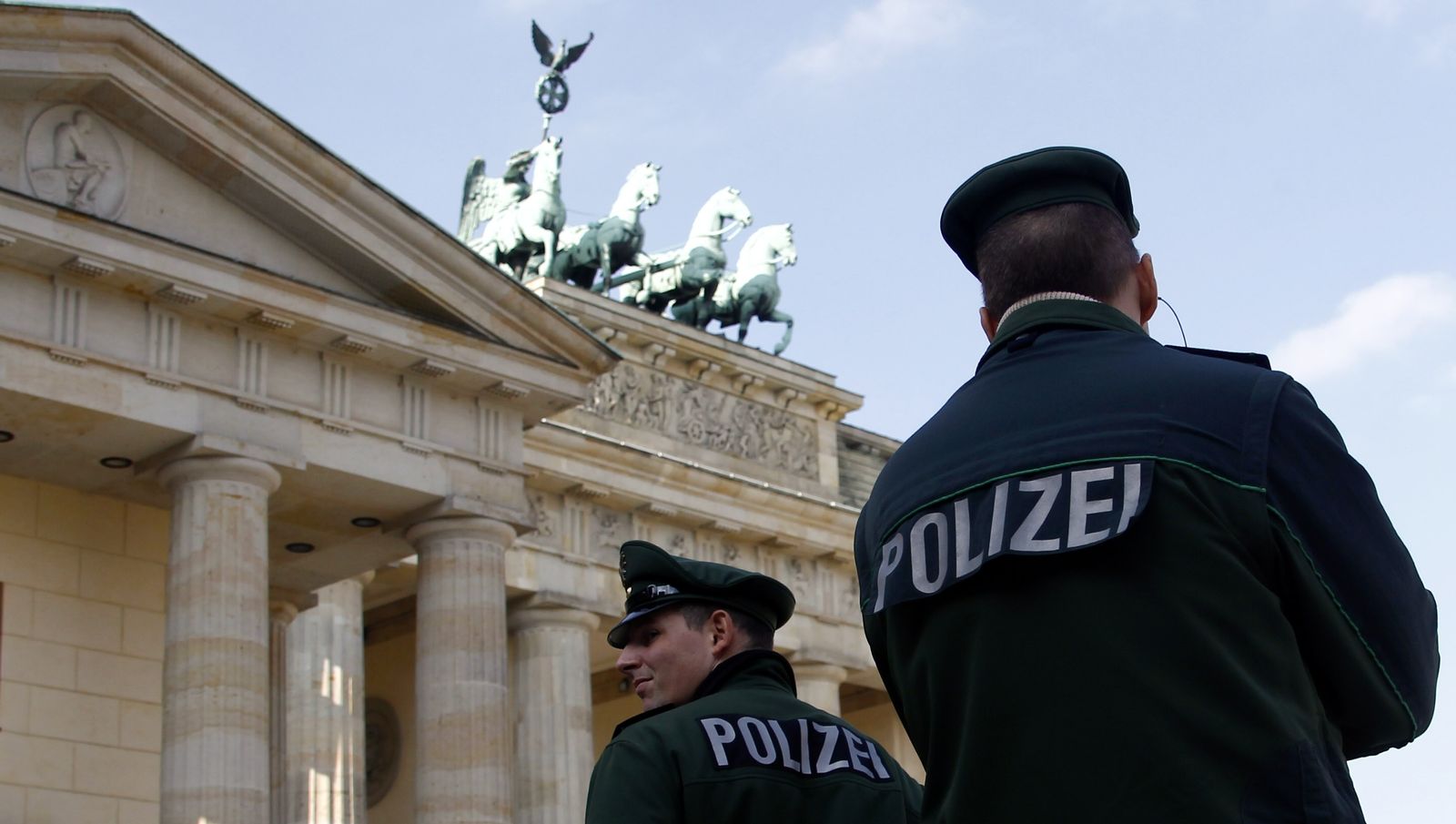 Tourists targeted: Policemen patroling next to the Brandenburg Gate in Berlin.