The EU summit on Monday was overshadowed by a new upsurge in fears of German domination following reports over the weekend that Berlin was proposing dispatching an EU commissioner to Athens to seize control of the Greek budget.

Chancellor Angela Merkel wanted the summit to send out a positive message about a commitment to jobs and growth, but failed to dispel the impression that Germany is throwing its weight about in the euro crisis.

Greek newspaper Ta Nea published a cartoon of Merkel holding Greece like a marionette under the headline "Nein! Nein! Nein!" And Italian Prime Minister Mario Monti warned this month that Germany must do more to help its eurozone partners or risk a backlash from citizens frustrated with austerity measures.

Economic data released on Tuesday underlined that Germany is doing far better than its European partners. German unemployment fell to a record low of 6.7 percent in January while joblessness in the euro zone rose to 10.4 percent in December, the highest rate since June 1998.

German media commentators say Germany has a right to insist on fiscal discipline in Europe but needs to tread more lightly in its rhetoric, and must refrain from proposals that insult its partners. The idea of an austerity commissioner, they say, was insensitive and unworkable.

"Whatever the euro summit agreed and whatever the next one will agree -- we won't get a European austerity commissioner equipped with authoritative powers."

"Countries in crisis can't be transformed into protectorates. An EU fiscal commissioner wouldn't be able to achieve much unless he had the powers of an occupying statute."

"The conclusion almost sounds paradoxical: In order to rescue their state and their sovereignty, the Greeks have to leave the euro zone. They owe it to themselves. They have to go their own way with the freedom afforded by exchange rate movements and with a strong stimulus of economic growth."

"Germany has the strongest economy by far in the EU, and its lead is growing. It is also the most populous country, which isn't insignificant in democratic terms. So it shouldn't surprise anyone that the German government is making use of this clout; that's legitimate."

"But Germany isn't the hegemon of Europe. It isn't the hesitant or even steamrolling hegemon who flattens the other members of the EU and/or euro zone. The union of the Europeans doesn't work that way. It isn't geared to systematic domination or subordination. That is the great achievement of its construction -- it is founded on respect. If Germany is to lead, as most partners want it to or say they want it to, this leadership cannot simply consist of giving orders.

"Leadership has to be learned. But it doesn't amount to some higher form of selflessness and distributing welfare. Germany bears a major burden in having to overcome a crisis that others got themselves into. It is de facto liable for their debts, which was never planned. Who can blame it for making its views clear? The fact that it insists on budget discipline doesn't undermine democracy in the debtor countries: It is the logic of life in the currency union, whose members joined of their own free will. No one should be insulted. But that applies to everyone. The Greek public shouldn't stupidly call the chancellor a Nazi, and should draw the right conclusions from a grandiose failure. And despite all the fuss being made: The country has de facto already surrendered its budget autonomy."

"Germany stands where it never wanted to stand again after 1945: as the dominant power in the middle of Europe. Its attempts to achieve this with cannons and tanks in the 20th century ended in apocalypses of blood and fire, but that's precisely why that Germany no longer exists.

"No country succumbed to the temptation of nationalism more terribly than Germany; in its collective memory, the crimes it committed across Europe still weigh heavily. True, it is a disgrace to exploit that fact today, even in Greece, whose political parties drove the state to ruin. But it should teach the German government not to confuse firmness with the arrogance of power when it comes to the euro crisis. Because this power is very real, and it is causing fear. The idea to impose an austerity commissioner on Greece was insensitive, as was the demand made by FDP leader Philipp Rösler for 'leadership and monitoring of Greece.'

"The Germans led Greece before, and though the massacres of Distomo and Kefalonia have nothing to do with today's euro crisis, such foolish tirades only fan the hysteria and the resistance."

"In truth, this worst crisis since the start of the European Union shows how vital that union is. It shows that a common currency, the free movement of goods, open borders and friendship among peoples can't be taken for granted. These are historically unique achievements of a continent whose peoples settled their disputes by waging war up until two generations ago. Today there are ways and means, common institutions that now face their great test."

"Germany must convince rather than dictate. It is just as dependent on Europe as the Greeks." 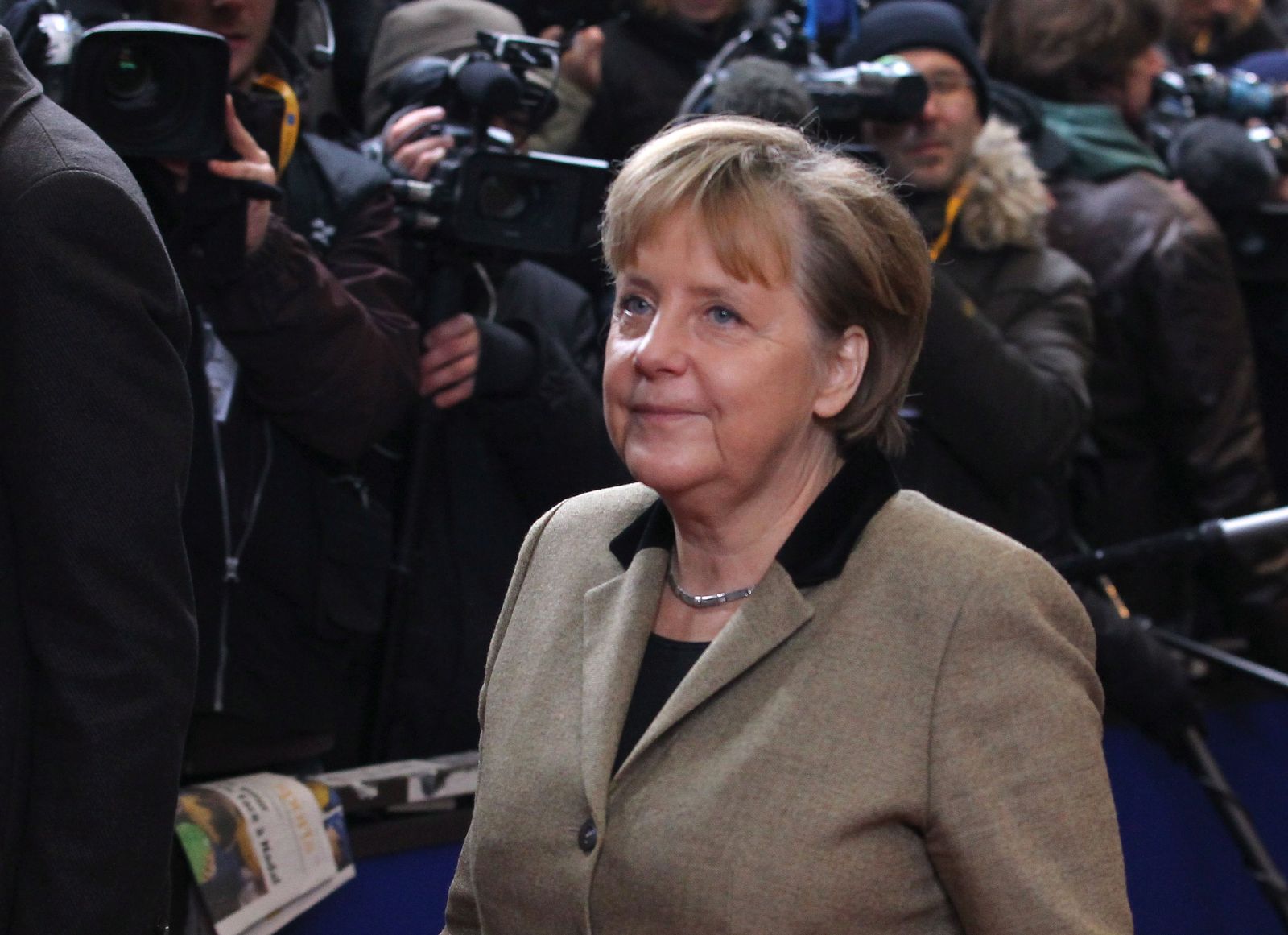 German Chancellor Angela Merkel at the EU summit in Brussels on Monday.