Genetically modified (GM) plants have always been a hot-potato issue in Europe. And it's about to get hotter. On Tuesday, the European Commission gave the green light to the cultivation of a genetically modified potato for industrial and feed uses. It also approved three varieties of GM corn made by the American biotech firm Monsanto for sale, but not cultivation, within the European Union.

The EU doesn't view the products as dangerous to human health or the environment. At a news conference held Tuesday, EU Public Health Commissioner John Dalli said: "Responsible innovation will be my guiding principle when dealing with innovation technologies. All scientific issues, particularly those concerning safety, (have) been fully addressed."

According to a press release issued on the decision by the commission, the EU's executive, Dalli will now have until the summer to put forward a proposal on how "a community authorization system, based on science, can be combined with freedom for member states to decide whether or not they wish to cultivate GM crops on their territory."

The Commission approved the cultivation of the Amflora potato, which was developed by the Germany chemical giant BASF, to be grown "for the production of starch suitable for industrial application (e.g., paper production)  (as it) helps to optimize the production process and to save raw materials, energy, water and oil-based chemicals." Though it was also approved for use in animal feed, products from the Amflora potato will not be permitted in foodstuffs intended for human consumption.

It has been 12 years since the EU approved a genetically modified food. In that case, it was MON 810, a GM type of corn made by Monsanto, which was subsequently banned in a number of European companies. Until being banned in April 2009, MON 810 was the only GM foodstuff commercially cultivated in Germany.

Still, many opponents of GM plants fear that their seeds might spread, cross-contaminate and affect surrounding ecosystems. In an effort to allay such fears, the Commission's "decision provides for strict cultivation conditions to prevent the possibility that GM potatoes will not be inadvertently disseminated into the wider environment." Another fear relates to how Amflora contains a marker gene that makes it resistant to antibiotics.

Responses from European governments and environmental organizations were swift. Austria said it planned to immediately outlaw growing the potato, and Italy's agriculture minister said he planned "to defend and safeguard traditional agriculture and citizens' health."

Heike Moldenhauer, a spokeswoman for the Friends of the Earth Europe environmental group, told the AP that the decision "puts profits before people." Hubert Weiger, the president of the German branch of Friends of Earth, called the decision "a political genuflection towards BASF." In a statement, Greenpeace EU agriculture policy director Marco Contiero said it was "shocking ... to authorize a GM crop that puts the environment and public health at risk."

Already Being Grown in Germany

German Agriculture Minister Ilse Aigner welcomed the decision, telling German news agency DPA it gave EU member states "more freedom" to form their own policies. "I plan to enter into a dialogue with Germany's states and, of course, the federal parliament," she said, "on how we can implement this possibility in Germany in a responsible way."

Though opposed to the cultivation of MON 810 in April 2009, Aigner did approve a field trial of the Amflora potato at that time on a 20-hectare (50-acre) field in the northeastern state of Mecklenburg-Western Pomerania. Indeed, the coalition agreement between Angela Merkel's center-right Christian Democratic Union (CDU), its Bavarian sister party, the Christian Social Union (CSU) and the business-friendly Free Democratic Party (FDP) states that: "We support the cultivation of the genetically modified starch potato Amflora for commercial industrial use."

Unlike the EU, however, Germany does not plan to allow the potato to be cultivated for use in animal feed. And, for the time being, the Ministry of Agriculture, BASF has voluntarily agreed to only use Amflora potatoes in biofuel facilities, according to DPA.

In Wednesday's newspaper, German commentators weighed in on the debate:

"Amflora is not immune to pesticides. It simply creates a really good type of starch. Still, the risk that the potato could still find its way into the food chain is high. After every harvest, tens of thousands of spuds remain in every hectare of field. And if conventional types of potatoes are planted in these fields at some later point, they can no longer be kept apart from Amflora. It's also alarming that Amflora is resistant to two types of antibiotics. So we can't rule out that, at some point, these agents will no longer work on things that have been cross-contaminated by Amflora."

"The European Commission has ignored these risks under pressure from the industrial lobby. The environmental movement must now do everything it can to draw attention to these dangers. Doing so could strengthen the resistance in the general populace to the point that no company would dare use Amflora."

"In global terms, this is rather trivial. But it's a big step for Germany because, along with Austria and France, (it) is one of the countries in which anti-GM activists hold sway over public opinion."

"The fact that the potato has been approved as an industrial starch rather than a food will make it harder for anti-GM organizations to fight against it than was the case with corn. Granted, a survey commissioned by Greenpeace found that three-fourths of Germans are against these potatoes. But surveys conducted by the Allensbach Institute for Public Opinion Research and Eurobarometer paint another picture: If citizens are informed of the benefits of the improved species, opposition to them shrinks."

"Several years ago, once-demonized medicine-related genetic engineering activities were finally -- and thankfully -- accepted. It's only when it comes to plants grown for food that reservations remain, despite the fact that roughly 60 percent of the foods you find in supermarkets already have something in them derived through genetic engineering. If the German government wants to meet future challenges, it needs to finally take a clear stand on genetic engineering and not abandon the field to the fearmongers. The point of doing so would not be to force something upon citizens but, rather, to allow scientists to do their work without being constantly harassed."

"The officials have made a decision that goes directly against the expressed will of the people. And the ruling underscores the fact that Europe is stuck in a rut when it comes to its green genetic engineering policies."

"What the politicians 'up there' decide doesn't match up with the feelings of people 'down there.' Up there, politicians have issued regulations meant to foster green genetic engineering in a way that is as safe as possible, while at the same time giving the impression that Europe is cosmopolitan and technology-friendly. But, down below, resistance is growing. Critics of genetic engineering are warning about the dangers that allowing the plants to freely grow presents to mankind and the environment. Likewise, they claim that GM potatoes are particularly dangerous because they can apparently build up resistances to antibiotics. When they hear such things, it is natural for people to worry. It doesn't help much that the European Food Safety Authority has certified the safety on a number of occasions. It has a reputation for being markedly pro-business, so can people really trust it? Uncertainty fuels opposition."

"There is only one way out of this rut: The approval procedure must be completely re-designed in a way that dispels all doubts. Only then will genetic engineering have a shot in Europe. In any case, making it politicians against citizens is not a solution."

"The European Commission's decision ... was long past due. ... But it might be a bit premature for BASF to hope that the green light given to Amflora is also a signal for the blossoming of green genetic engineering -- at least in Germany. Within some segments of the population, GM plants enjoy a reputation for being about as dangerous as nuclear energy. That will only change once Amflora's harmlessness has been proven not only in scientific papers, but also after it has been harvested. Until then, there will presumably be vehement protests in the fields. BASF and its competitors would be wise to strengthen the campaign for the acceptance of green genetic engineering that only recently began." 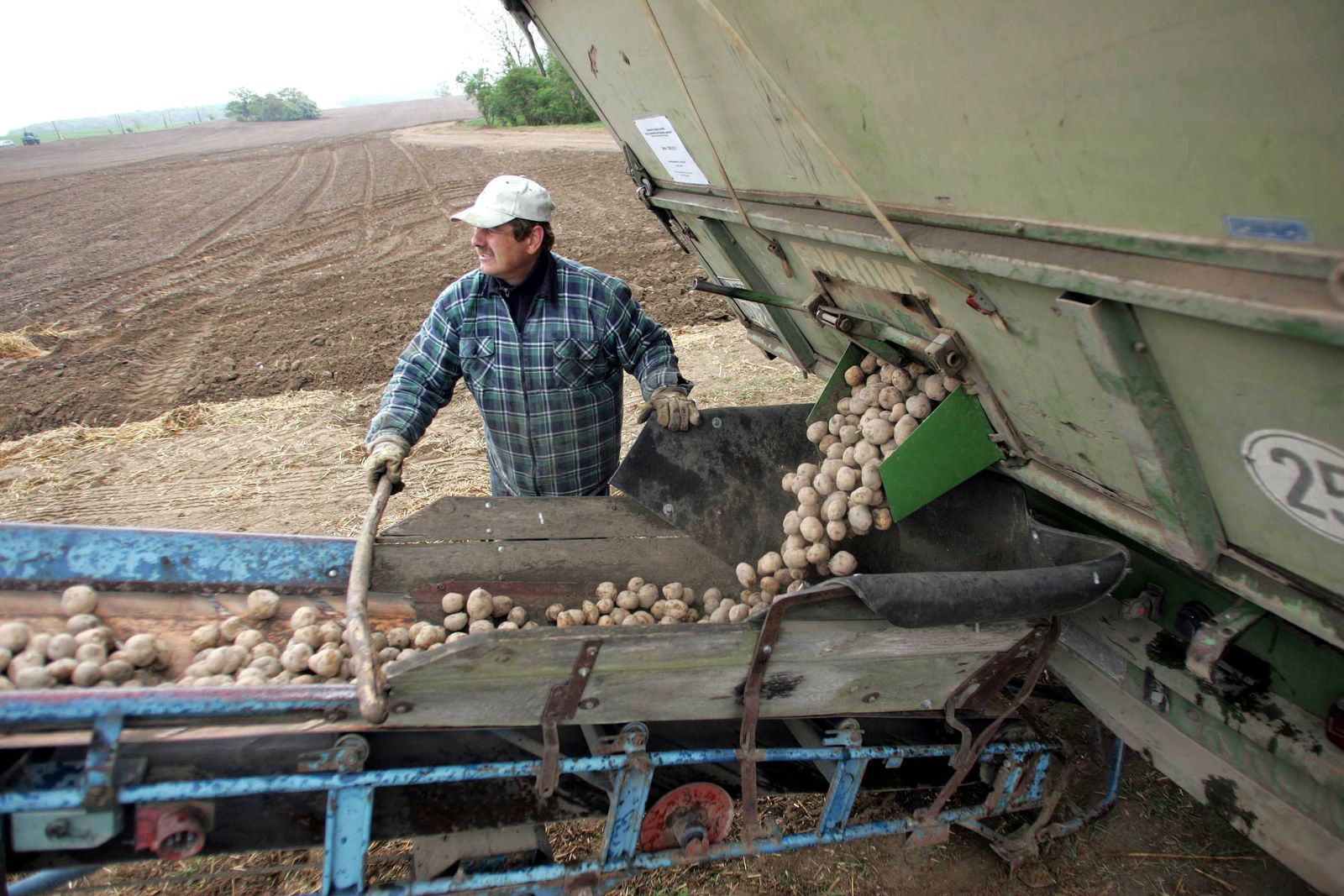 The contested Amflora potato being grown as part of a field trial in northern Germany.